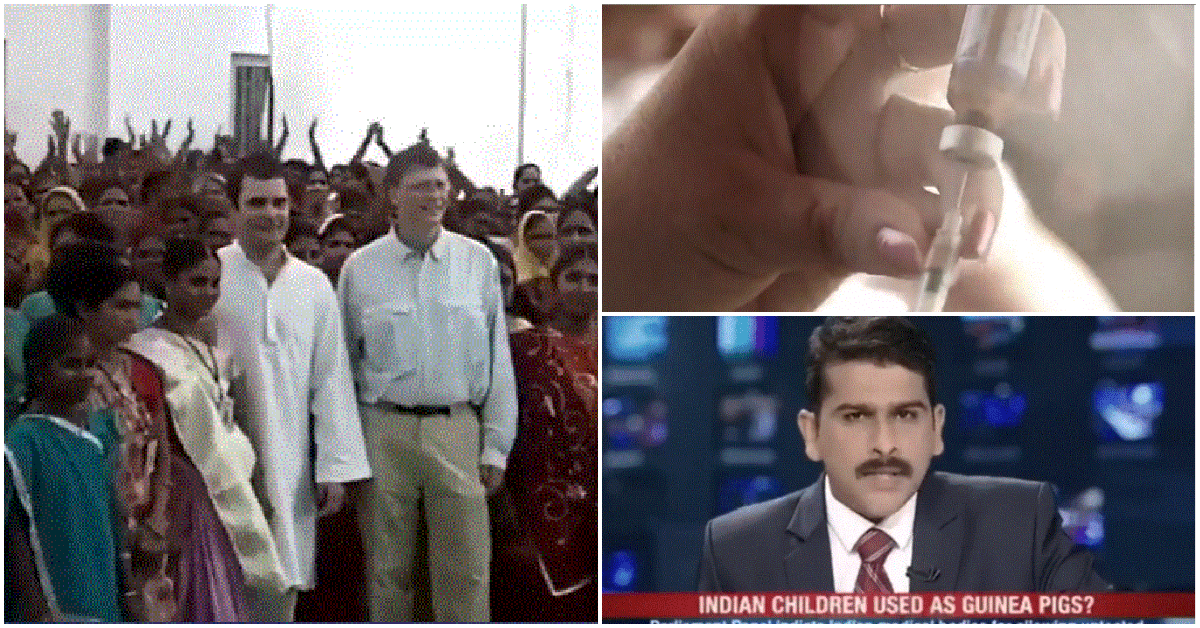 According to Children’s Health Defense (CHD), “vaccines, for Bill Gates, are a strategic philanthropy that feed his many vaccine-related businesses (including Microsoft’s ambition to control a global vaccination ID enterprise) and give him dictatorial control of global health policy.”

Gates’ obsession with “pointed objects” seems to be fueled by a conviction to ‘save the world with technology’.

Bill Gates. What you have not been told about his vaccine atrocities – and it’s not just young girls.

The first 5 minutes of old film footage are especially revealing of how unhinged he really is:

They mandated AN INSANE 50 doses (Figure 1 as indicated by arrows) of oral polio vaccines (OPV) through overlapping immunization programs to children before the age of five.

Indian doctors blame the Gates campaign for a devastating non-polio acute flaccid paralysis (NPAFP) epidemic that paralyzed 490,000 children between 2000 and 2017. (See the actual figures in summary under Table 1).

The Economic Times of India reported on this, especially the absence of informed consent, in its article titled, “Controversial vaccine studies: Why is BMGF under fire from critics in India?”

In 2017, the World Health Organization (WHO) reluctantly admitted that the global explosion in polio is predominantly vaccine strain.  In fact, by 2018, 70% of global polio cases were vaccine strain. ~Robert F. Kennedy Jr. (source)

(Now they want to experiment on our children, ages 5-12! And ominously, we are being warned again about Acute Flacid Myelitis again this very fall and winter.)

And what about the girls?

The BMGF talks about curing diseases, but it’s actually about something very different. It’s about increasing the profits of big pharmaceutical companies by arranging for them to use third world people as guinea pigs and thereby avoid the costs they would incur if they used the ethical and safe procedures enforced in developed nations like the United States. See Vera Sharav’s report.

This video reveals how thousands of girls (boys got these, too) were sterilized or killed via malaria, meningitis, tetanus, and DTP “charity” or “philanthropic” vaccines! (source)

There was a ‘sterility formula’ found in each of the vaccines tested.

The case has been back and forth in India’s Supreme Court.

Does the bullying and pressuring sound familiar?

Google defines “indemnity” as “security against or exemption from legal liability for one’s actions.”

Gates was so worried about his own personal legal danger that he said he wouldn’t distribute his vaccines until governments agreed to indemnify him against lawsuits.

And so they did!

“May the Lord defend the cause of the poor of the people, give deliverance to the children of the needy, and crush the oppressor!” ~Psalm 72:4

Deep Roots At Home now has a PODCAST! We are covering everything from vaccines, parenting topics, alternative medicine, and I just gave my horrible testimony of abortion and assisting in abortions. Head over today and like, share and download a few episodes! https://buff.ly/3KmTZZd