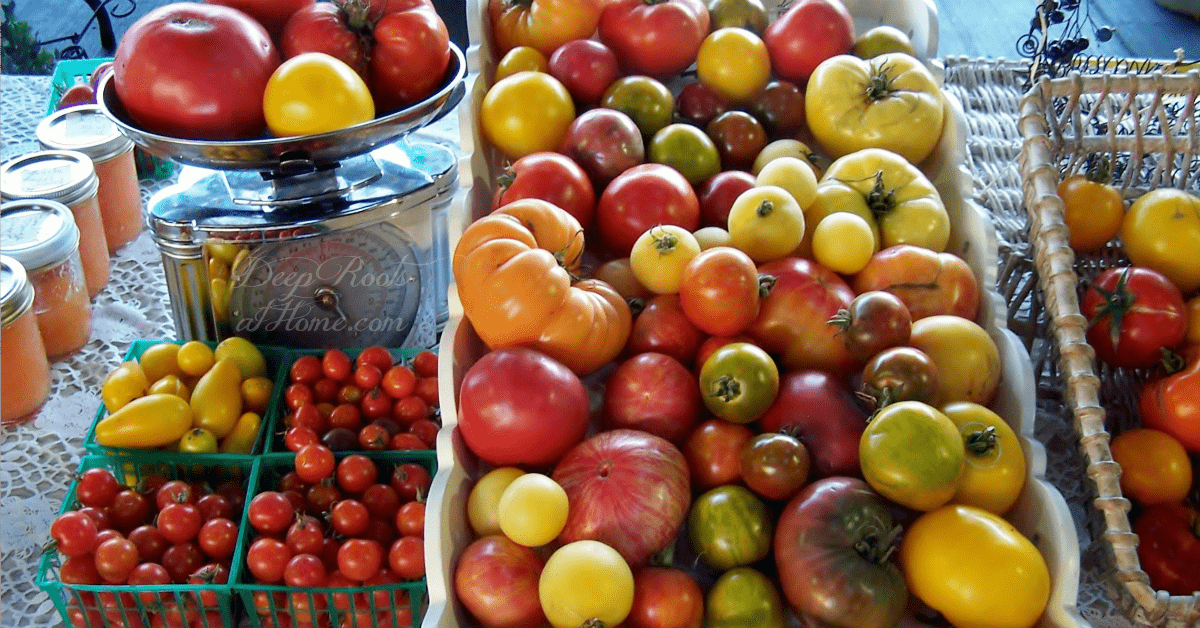 We have experienced that they are some of the best-tasting tomatoes in the world! I’ll share a few we have grown and enjoyed with you.

Terry O. is a fun and interesting friend in town who, together with her husband, starts an unusual assortment of heirloom tomatoes in their garage in March/April with grow lights and heaters. I wish I had taken a picture of their cute place. It was such fun to visit with them in their greenhouse where she was acclimating her thriving mostly-heirloom inventory. 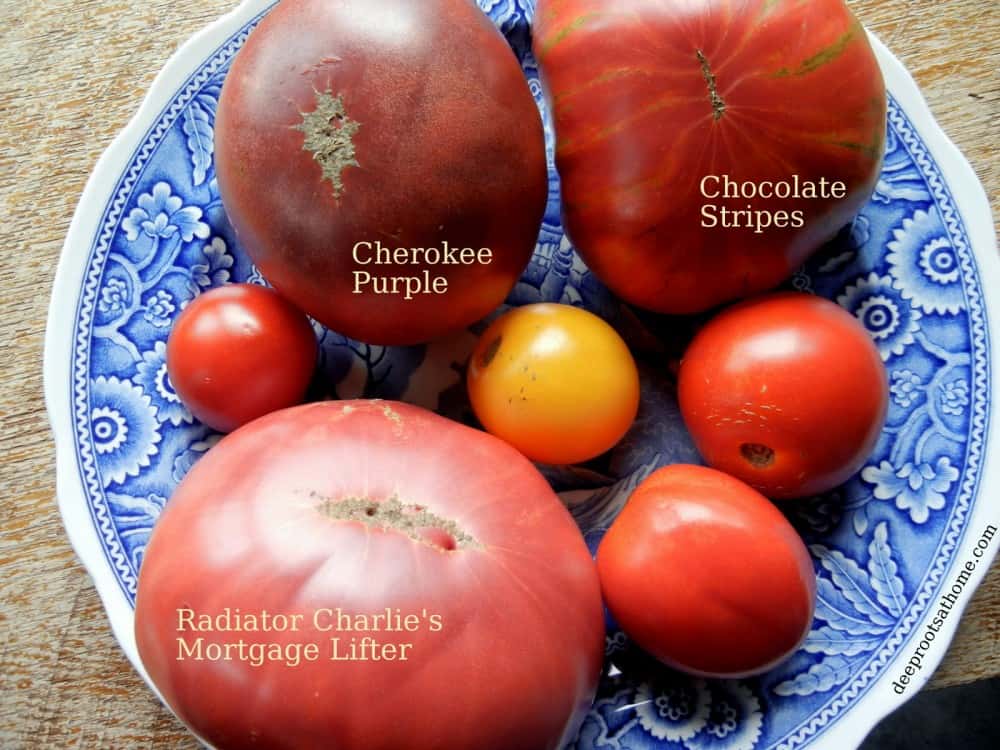 For canning, paste, or a killer spaghetti sauce, it’s hard to beat ‘San Marzano’, a sought-after heirloom from the Campania region of southern Italy. You can buy it in expensive imported cans, but even better, grow your own at home. 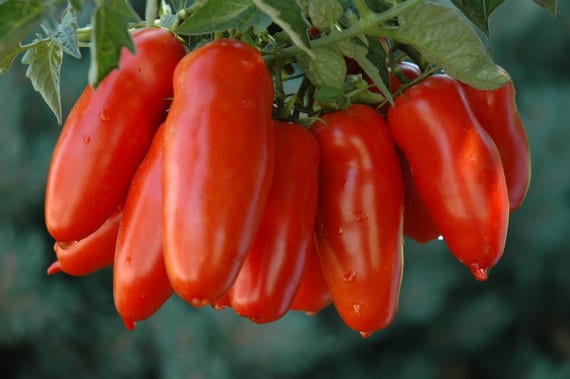 Malakatovoya Shktulka (aka ‘Malachite Box’) is a beautiful lime-green tomato with great flavor, consistent set, and high production.
The seeds were originally sent to Tatiana Kouchnareva as part of a large seed exchange with Tamara Yaschenko of Byisk, Siberia, Russia in 2006. 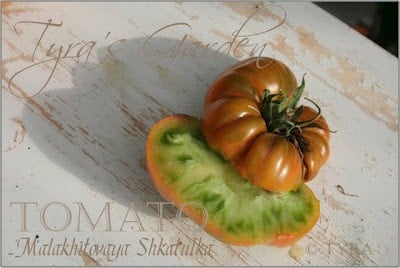 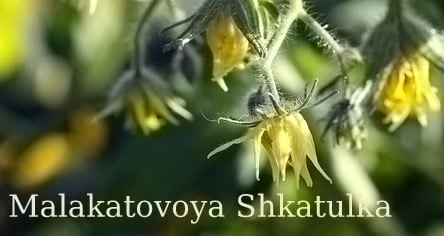 Top right on my plate below. The friend who told me about Terry grew these last year, and she kindly brought me several to try. Also pictured is our family’s favorite, Mortgage Lifter.

Chocolate Stripes is one difficult tomato to describe, and the photo below hardly does it justice. I’d love to have a slow motion camera to watch it as it changes in color from the earliest pea-sized fruit to the full, ripe handful. There are touches of olive, pink, gold and orange, mahogany/chocolate, rose, and burgundy.

There is quite a demand for Chocolate Stripes, I found. The seed suppliers say everyone wants it. It is open-pollinated and bred in Troy, Ohio. 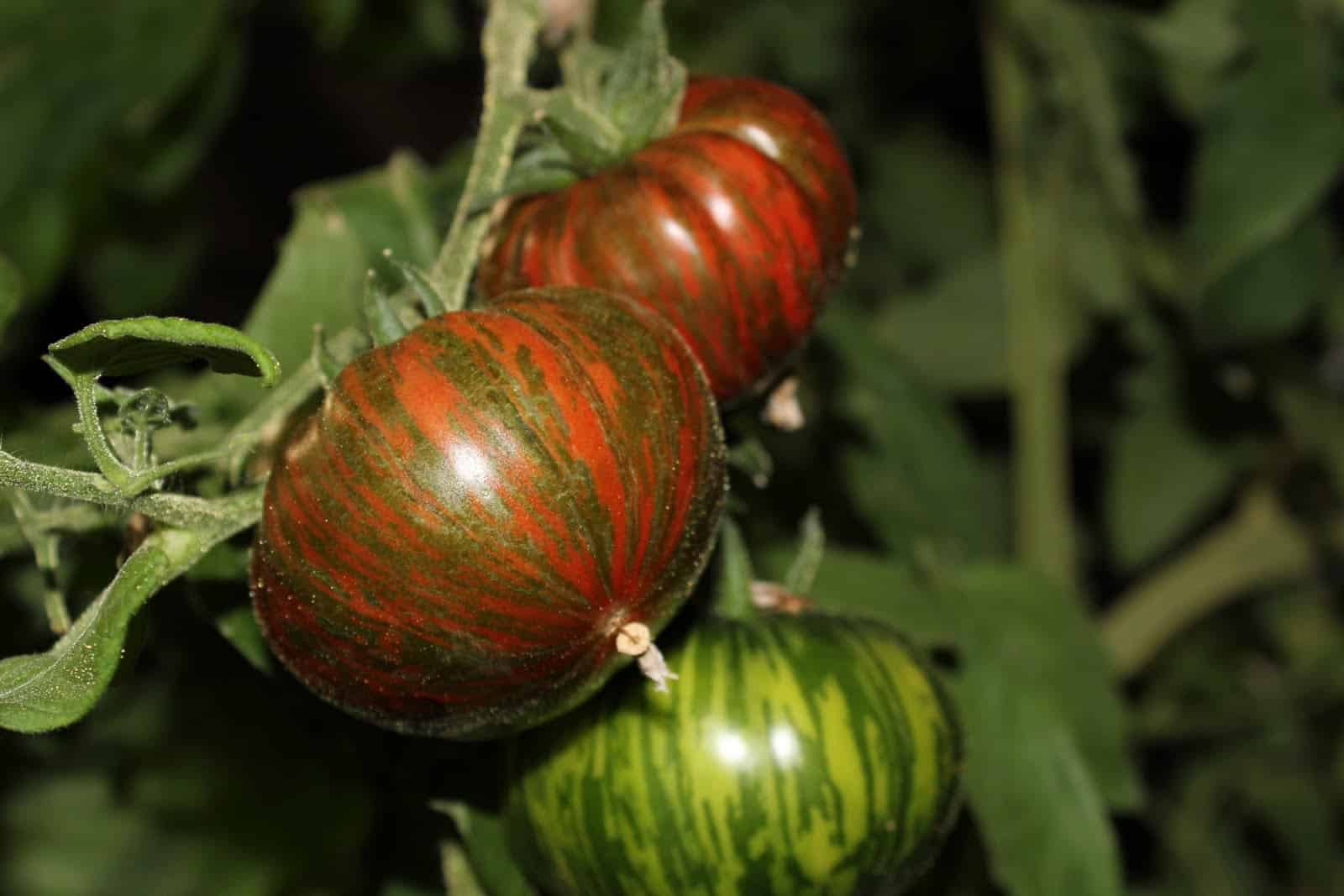 This is an heirloom from Tula, south of Moscow, Russia. Largest of the black tomatoes with 3-4″, slightly flattened, oblate, dark brown to purple fruit with deep green shoulders. Deliciously outstanding, rich, slightly salty, smoky-fruit flavor. Blacks are best known for their smoky flavor. 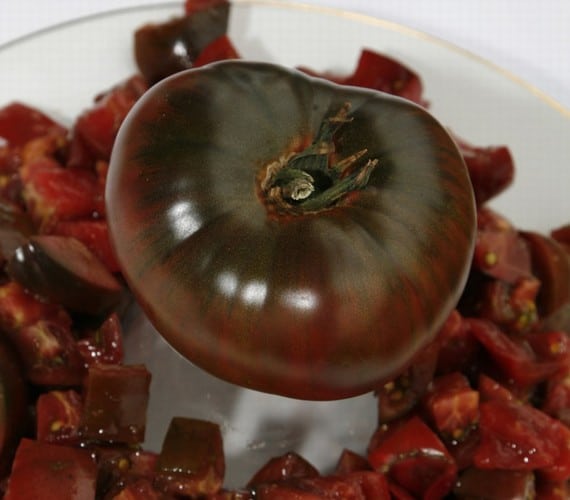 Brandywine, at least according to Burpee, was their introduction and first offered in their 1886 catalog. However, the early history of the Brandywine is a bit muddled; some think it to be of Amish origin. This variety was mentioned later in the 1888 Johnson and Stokes Catalog.

The Cherokee Purple is reported to have been grown by the Cherokee Indians, and is dated back as far as the late 1800s. It really has an interesting history and only became available in seed catalogs in the early 1990’s. You can read more about it’s history on Wikipedia.

Besides the unusual deep dusky red/deep purple hue of it’s fruit, Cherokee Purples are extremely sweet and have an unbeatable tomato flavor. 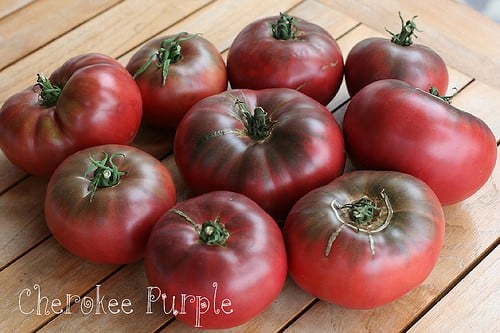 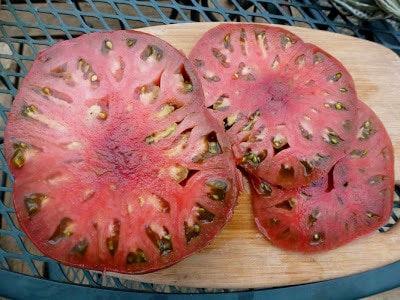 This is the only hybrid we’re growing this year; probably developed in a lab or greenhouse 🙂 It is far better to grow an heirloom, certainly, but I wanted one cherry tomato for dehydrating, and this is what Terry had. Cherry tomatoes are thought to have originated in Peru and Northern Chile to at least the 15th century.

These make great ‘sun-dried tomatoes’ for pizzas and for eating dried as a nutritious snack! 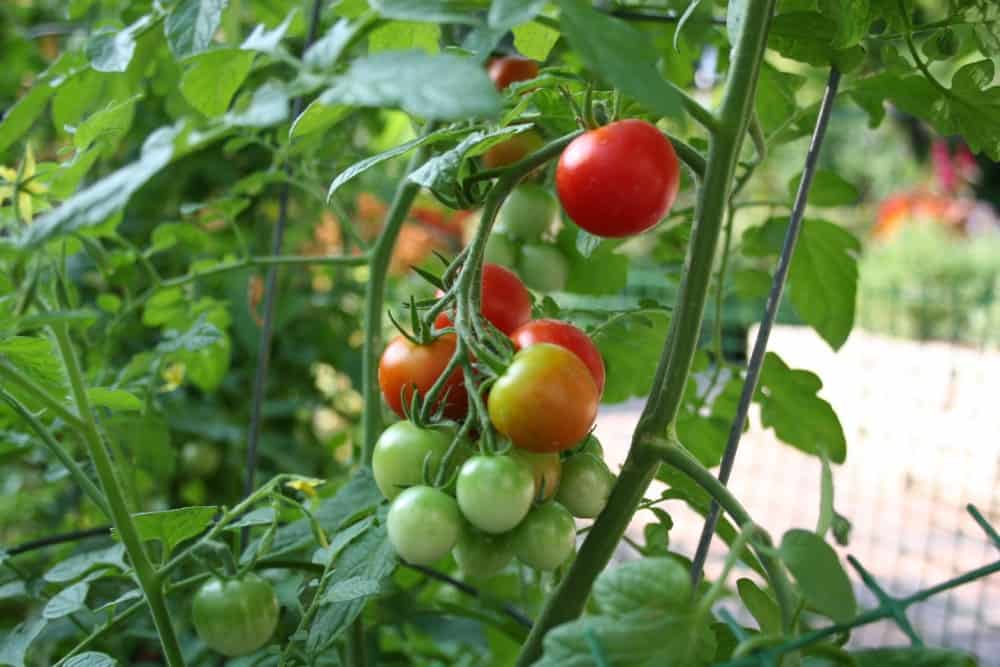 We got all of these plants out into the garden under Tomato Teepees/Wall ‘O Water* despite cold April weather, so they had been in the soil for 4-5 weeks before we took them off.

Have you grown any heirloom tomatoes with funny names? Please share them with us.

Want to find a supplier with a huge selection of heirloom varieties, some with weird names? You might check out Tatiana’s Tomatobase. 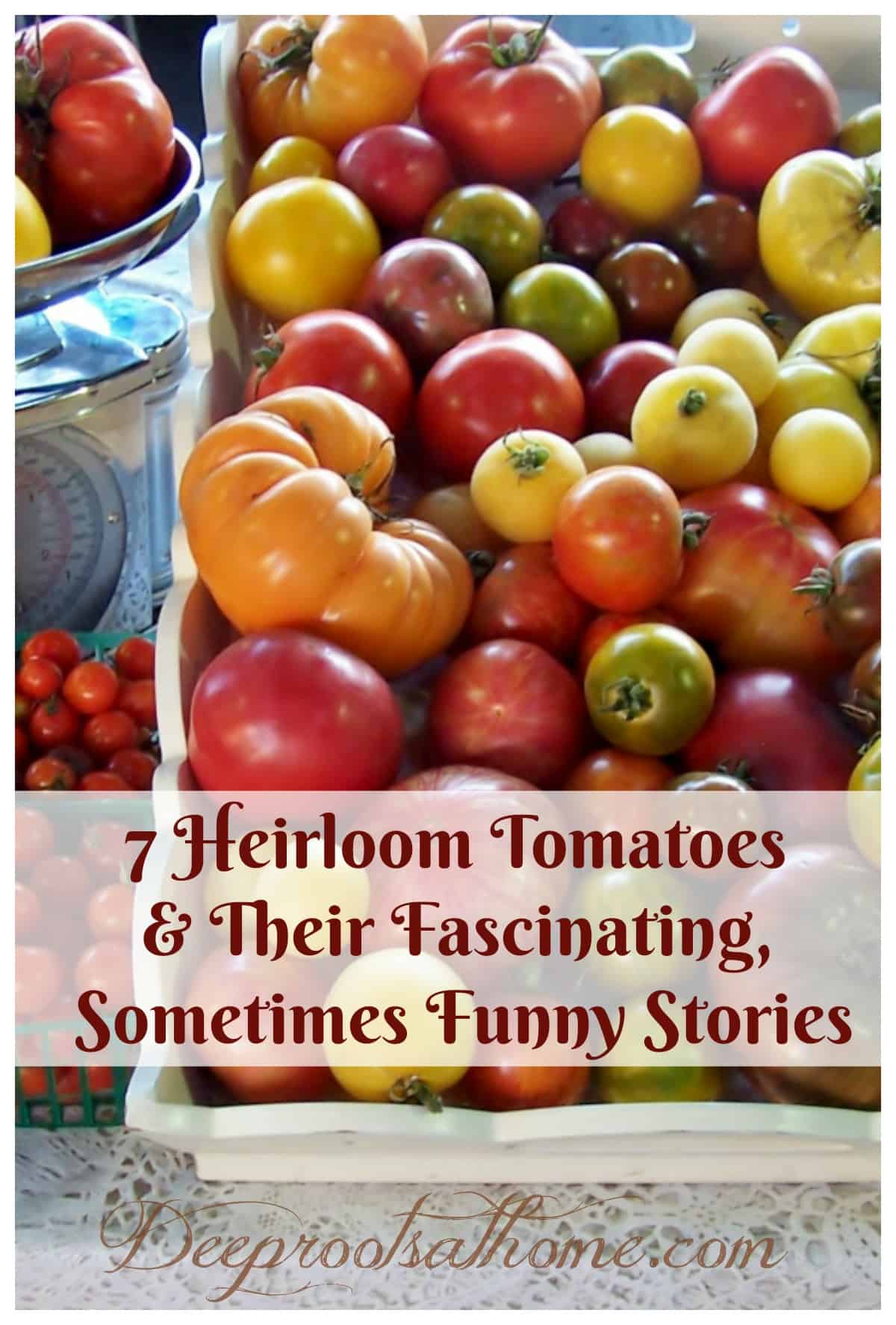