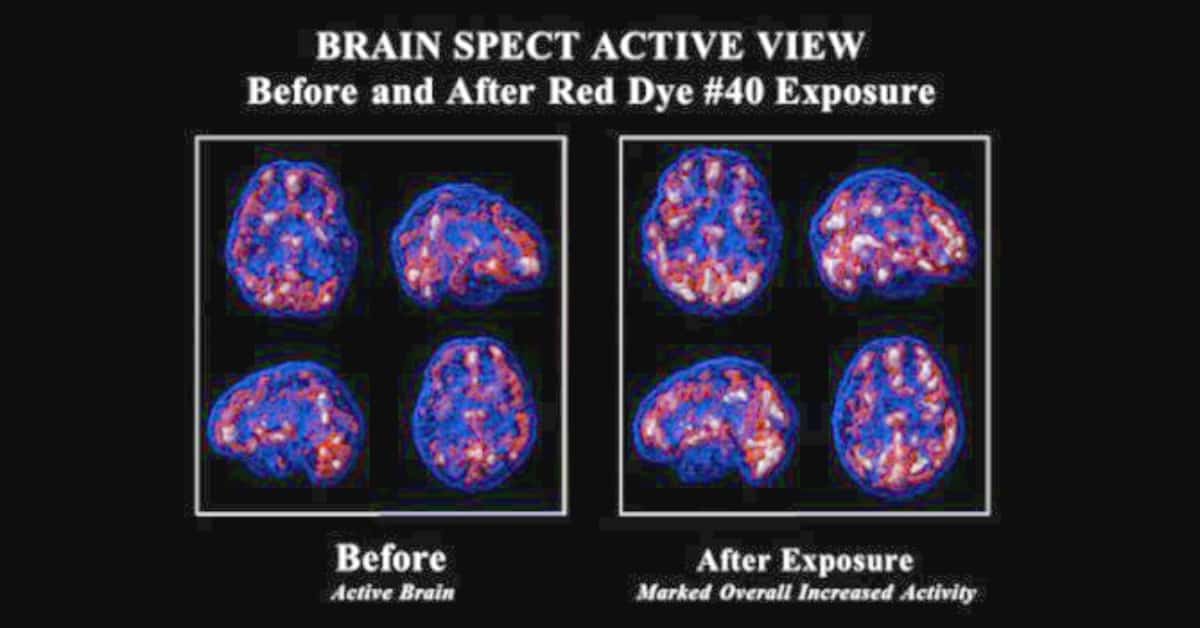 A child who eats 2 cups of Kraft Macaroni & Cheese, a small bag of Skittles, and 8 ounces of Orange Crush soda will consume 102 milligrams of artificial dye, including red dye #40. Behavioral tests found as little as 30 mg can cause adverse reactions. 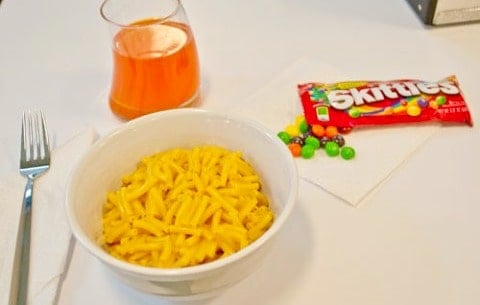 Since we all understand children are easy targets for brightly colored foods, foods geared toward kids often have the highest levels of dye.

What does the following (very incomplete) list of foods have in common?:

Realize the these foodcorps can change their formulas at any time, so always read!

Besides being a part of the unhealthy Standard American Diet, if you guessed Red Dye #40, you’re right!

Unbelievably, the food industry dumps 15 million pounds of artificial dyes into our food supply every year – over 40% of which is petroleum-based Red Dye #40. It is also known as:

It is the number one food dye used in the United States, even found in foods that are not red. You will find it in blue, orange, brown and even white icing contains artificial color.

Even though there are safe alternatives available, artificial food dyes are the cheapest and most profitable way for manufacturers to make food even brighter and more appealing on the grocery store shelf. You will find Red Dye #40 in a wide range of food and products:

Without Red Dye #40, chocolate instant pudding would actually be green due to so little chocolate in it. Finding red dye in cherry pie filling is notable, since you’d would think the cherries would make it red enough. And some brands of pickles have blue and yellow dyes.

Although Red Dye #40 has been approved by the FDA for use in food products and must be listed as an ingredient on labels, it has been banned at one time or another throughout most of Europe and Australia due to health risks.

Multiple studies published in journals such as Clinical Pediatrics, The Lancet, and Journal of Pediatrics demonstrate that children are adversely affected by artificial food dyes. Other recent research also indicates that artificial coloring and flavors, can make some non-ADD kids hyperactive. Also, both adults and children report migraines, jitteriness, upset stomach, nervousness, and inability to concentrate after a higher intake of Red Dye #40.

Brain SPECT imaging also demonstrates that Red Dye #40 can dramatically affect brain function. Consider the case of Robert, a 15-year-old that was recently imaged at Amen Clinics. His parents noticed that whenever Robert ate or drank something bright red, his behavior became aggressive and hostile. He would easily cry and storm off in a huff or throw things. They brought him to Amen Clinics to confirm their suspicions that he was reacting to these food additives. (source) As can be seen on this teen’s SPECT scan, his brain showed remarkable overall increased activity with exposure to Red Dye #40. In the images, blue equals average activity; red equals the top 15% of brain activity; white equals the top 8%.

Once they removed Red Dye #40 from his diet, his behavior improved dramatically. Robert’s mother strongly believes that their experience is not a unique one and that Red Dye #40 should be completely banned from our food supply. (source)

Watch This: How Foods With Additives & Dyes Affect Children’s Behavior 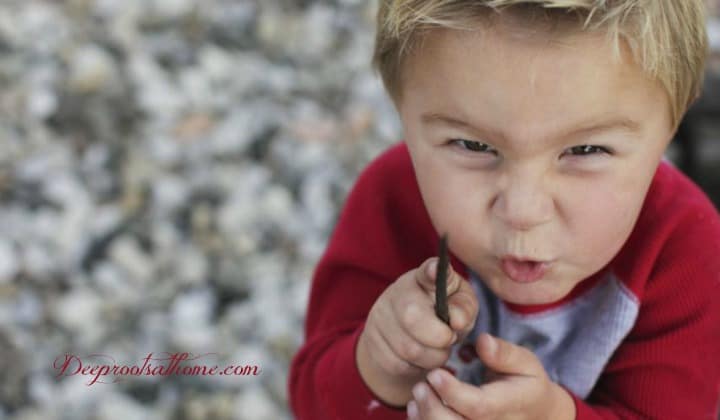 Food Dyes Cause Hyperactivity in Some Children Even at Low Levels

In 2007, a carefully designed, randomized, double-blind, placebo-controlled study published in the journal The Lancet concluded that a variety of common food dyes and the preservative sodium benzoate cause some children to become measurably more hyperactive and distracted.

In the case of this Lancet study, the British Food Standards Agency (FSA) issued an immediate advisory to parents, warning them to limit their children’s intake of additives. They also advised the food industry to voluntarily remove the six food dyes named in the study and replace them with natural alternatives.

As of 2010, most foods in the EU that contain artificial food dyes were also labeled with warnings stating the food “may have an adverse effect on activity and attention in children.” Many food manufacturers voluntarily removed the dyes from their products. Consequently, if you eat a Nutri-Grain cereal bar in the US, it will contain artificial color, including Red 40. But that same bar in the UK contains only non-artificial coloring.

In fact, the UK branches of Wal-Mart, Kraft, Coca-Cola, and Mars removed artificial colors, sodium benzoate, and aspartame from their product lines as a result of consumer pressure and government recommendations – back in 2011.

In the US, however, the FDA continues to allow these toxic ingredients in countless popular foods, including those marketed directly to children.

Sadly, the FDA decided that warning labels are not necessary on US foods that contain these ingredients.

Many studies have shown that food dyes can impair children’s behavior, but until now the amounts of dyes in packaged foods has been a secret. New research by Purdue University scientists, published in the journal Clinical Pediatrics, reports on the dye content of scores of breakfast cereals, candies, baked goods, and other foods.

In their 58-page report, “Food Dyes: A Rainbow of Risks,” CSPI revealed that nine of the food dyes currently approved for use in the US are linked to health issues ranging from cancer and hyperactivity to allergy-like reactions – and these results were from studies conducted by the chemical industry itself.

Keep Up the Pressure

Recently a few in the food industry have taken steps toward addressing the issue. Maybe a marketing ploy or maybe general concern, more and more foods are being marketed with claims like “contains 100% natural dyes”.

Pepperidge Farms, makers of the immensely popular snack, Goldfish, made the switch to natural dyes for the popular kid’s snack a few years ago. Last November Kraft announced they were reducing the amount of red and orange dyes in their cheese powders, dimming the hue from Day-Glo to simple yellow.

By being label readers and refusing to buy these foods that harm us and our children, we can affect change. 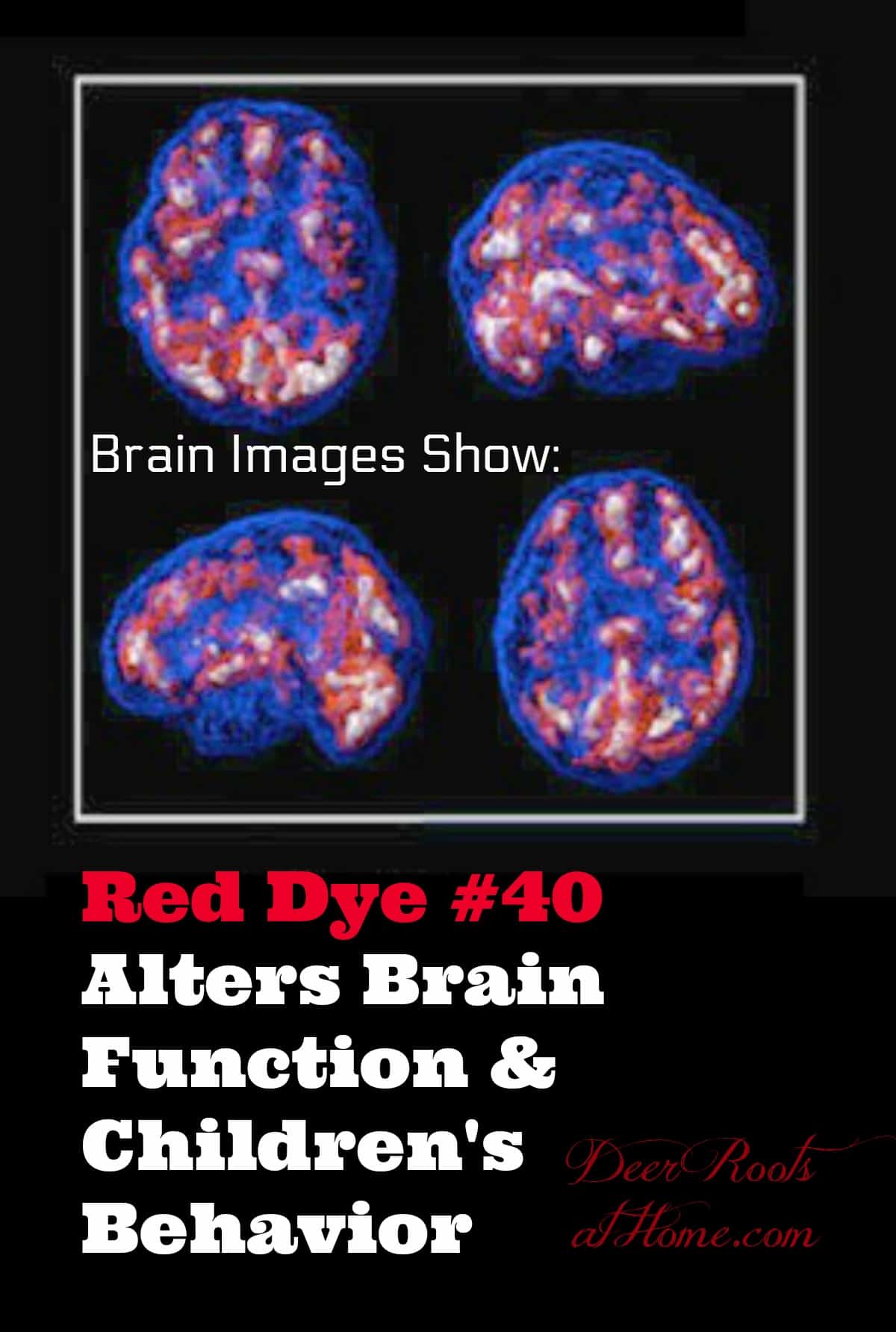 Share31.7K
Telegram
Pin437
32.1K Shares
« Why Fifty Shades Of Grey (Or Any Other Degrading Movie) Will Kill You
One Calculator’s Yearly Figures: How Much Is A Mother Worth, Anyway? »