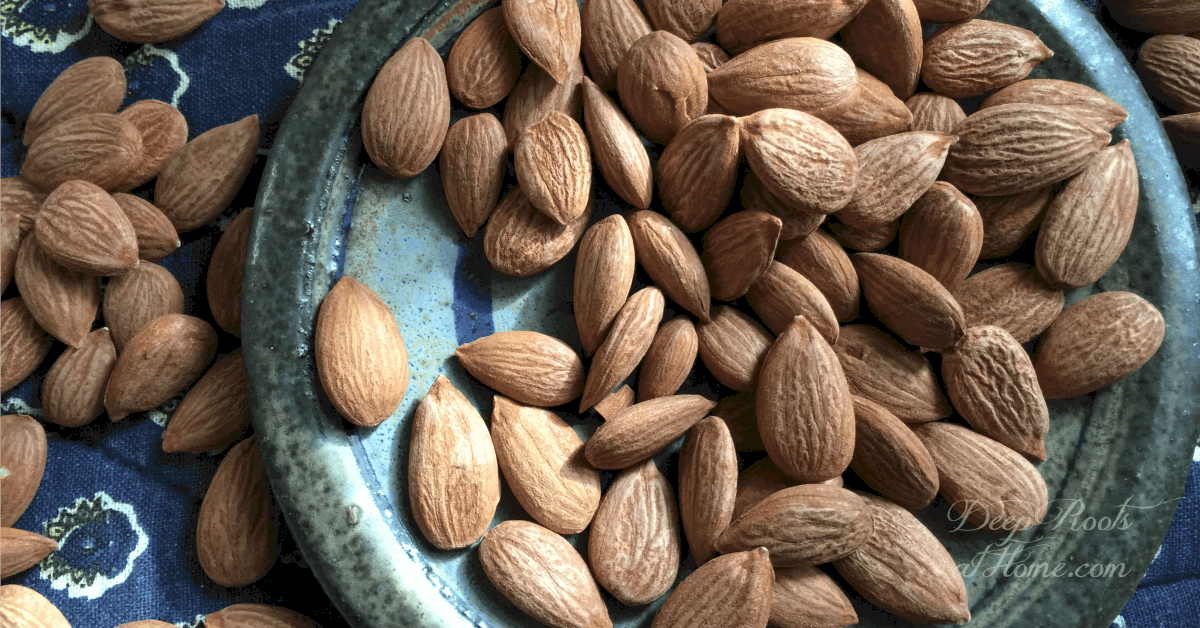 But they also contain life-saving poison!

One Woman’s Story using Apricot Pits (B17) for Breast Cancer

(Shared with permission from my friend Tabitha Alloway, a wise researcher).

A few years ago my mom was diagnosed with breast cancer. She had no desire to go through surgery, chemo, or radiation, and while in the hospital discussing options with the surgeon, he suddenly lowered his voice, learned forward, and told her, “There are other options. Get online. Research. Then if you decide you want surgery, you can come back and see me.”

Mom began taking B17 in the form of apricot seeds. Six weeks later, her one-inch lump had disappeared.

That was 6 years ago.

Awhile back I had my own scare with cancer. The doctors were concerned, but thankfully the lump turned out to be benign.

Before they biopsied it though, I began taking the B17 —just in case.

The Science of B17 in Apricot Seeds

Let me explain the science of B17, because most doctors will try to scare you away from it.

B17 is in glycosides found in several different foods, but it is in its highest concentrated form in bitter apricot seeds.

If you look up anything on apricot seeds you will find articles telling you these seeds possess a deadly poison–cyanide. This is only part of the truth.

Actually there are TWO deadly poisons in apricot seeds: cyanide, and benzaldehyde. Both poisons are deadly, but when put together they are 100 times more deadly than either in isolation!

Doctors will warn you to never, never touch the stuff.

But here’s what they don’t tell you…

Every molecule of B17 contains the following:

– one unit of hydrogen cyanide

– one unit of benzaldehyde

These units are tightly bound together, and until they are “unlocked” can do no damage.

There is only one “key” that fits the lock: the enzyme beta-glucosidase. Beta-glucosidase is found all over the body in very tiny quantities, but there’s a lot of it at one place, and one place only: the site of cancer cells.

This means that the poison can be “unlocked” and released on the cancer. The cancerous cells are attracted to it because they want to feed on the sugar.

The cyanide serves an additional purpose, as well. In the presence of certain inhibitors in the blood, the enzyme trypsin can become inactivated. This is bad, because trypsin can help eat away the protective coating around cancer cells.

Surprisingly, hydrogen cyanide acts as a coenzyme to trypsin, reactivating it! It is then able to digest the protective coating around the mutated cells, making them vulnerable to destruction.

But how does the cyanide affect the body’s healthy cells? Is it dangerous to them? (See the caveat of eating sugar below).

Well here’s where rhodanese comes in. Rhodanese is another enzyme produced by the body–present in far larger quantities in healthy tissue than beta-glucosidase. This amazing enzyme has the ability to break down cyanide and benzaldehyde into a thiocyanate (harmless), and salicylate (basically a painkiller). Guess which cells contain no rhodanese whatsoever?

Yep. The cancer cells are the only ones with no protection from the powerful poison they unleash on themselves.

Selective toxicity. That is the way B17 works.

Laetrile is the metabolite form of the glycosides taken from fruit seeds for clinical use. Hundreds of clinical studies have been conducted around the world, proving its efficacy. You will not hear about these from the medical establishment.

The most famous tests ever done on laetrile were carried out at Memorial Sloan Kettering Cancer Center. The man who headed the research project, Dr. Kanematsu Sugiura, firmly believed in its efficacy. But after 5 years of research, the team released a press statement saying it did not work. Nothing to see here. Go home.

But when a journalist asked Dr. Sugiura if he stuck with his belief that laetrile stops the spread of cancer, his reply was “I stick.” When asked why Sloan Kettering didn’t want to use the treatment, he said, “I don’t know. Maybe the medical profession doesn’t like it because they are making too much money.”

As it turns out, another scientist at Sloan-Kettering (Dr. Lloyd-Schloen) ran more tests which demonstrated laetrile’s efficacy. In fact, when he combined laetrile with proteolytic enzymes, 100% of the mice he tested it on were cured of cancer!

So they ran MORE tests, purposely designed to contradict the biochemist’s findings. They changed protocols and amounts so that the tests would (predictably) fail. They then reported that laetrile simply doesn’t work.

So there you have the story and the science.

My mom and I were eating 30 cyanide-laden seeds per day for months without a single side effect–other than that her tumor disappeared in 6 weeks.

We also took the pill form of it, which we bought from the company Novodalin. And this company has put 2 1/2 bitter apricot seeds per capsule, so you can gradually increase your intake as Tabitha and her mom did.

There are scary internet stories about people becoming ill from eating apricot seeds, stories prominently circulated by the government and medical establishment. If these are true, they also seem to be an anomaly–and perhaps not all the facts of the case are given. You will hear many, many more success stories of people who used it to treat their cancer without chemo or radiation if you dig a little deeper.

[This video ‘The Story of VITAMIN B17 by G. Edward Griffin (1974)’ has been blacked out, but you can still watch, but clicking on the “Watch on YouTube” link]. They are just trying to discourage us from learning more about Essiac!

If you are seriously searching for help, this is extremely fascinating from about 2:30:

If this one fails, here is a longer video that cannot be taken down:

My mom started with 3 apricot seeds a day and quickly increased till she was eating 30.

Ty Bollinger (in his book) suggests a preventative of 3 pits a day OR 50 milligrams/day to prevent cancer (or half of a 100-milligram tablet).

There are so many, many cancer treatment alternatives. I may share more here as I have the time. One of the best sources for info is The Truth About Cancer (the videos). A lot of the information I shared comes from Ty Bollinger’s book of the same name.

“One needs to be on a good organic diet while avoiding all processed foods when treating cancer. Sugar is an absolute no-no for any cancer treatment. It just feeds the cancer cells. Sugar can allow cancer cells to thrive while ignoring amygdalin`s poisons, leaving too many healthy cells with the burden of avoiding any incidental cyanide breakdowns from abundant amygdalin.

This burden and extreme apricot kernel consumption could leak some cyanide into healthy cells. But the warning signs are early and clear. Any nausea, dizziness, or headaches indicate it`s time to slow down the amygdalin dosage, or cut the sugar.” (source)

Laetrile: The Suppressed Cure for Cancer 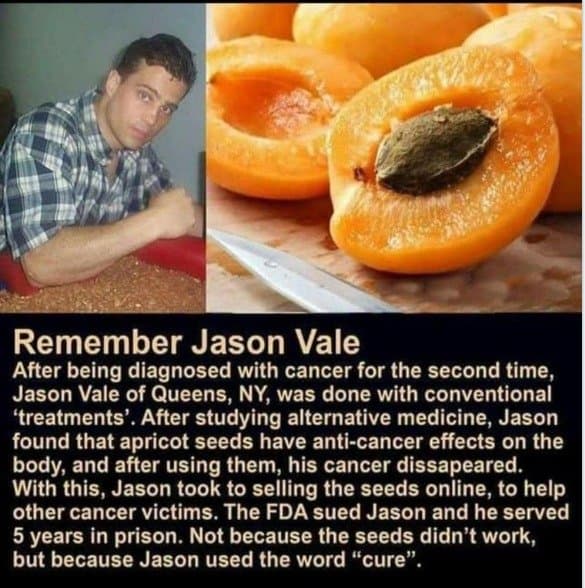 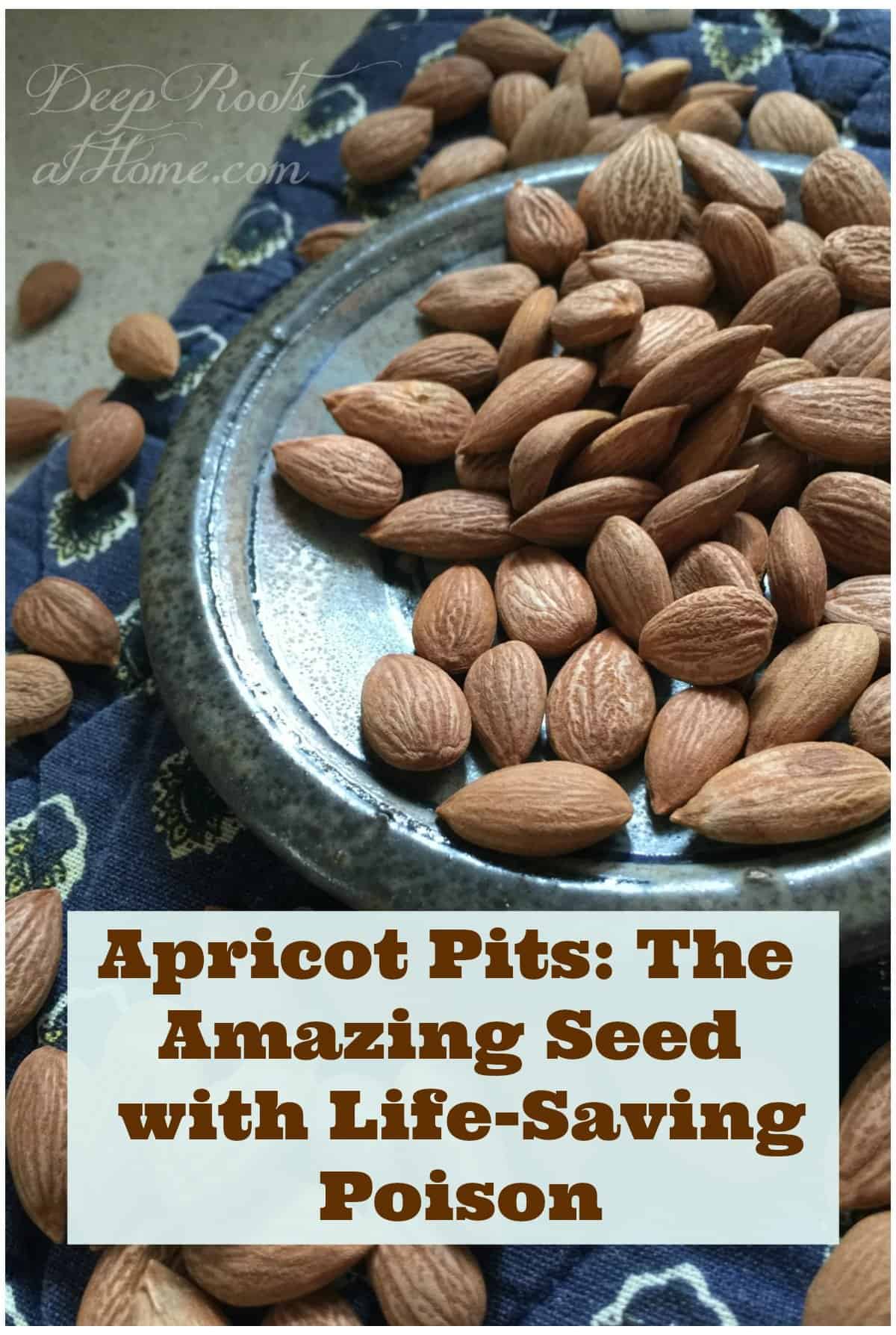