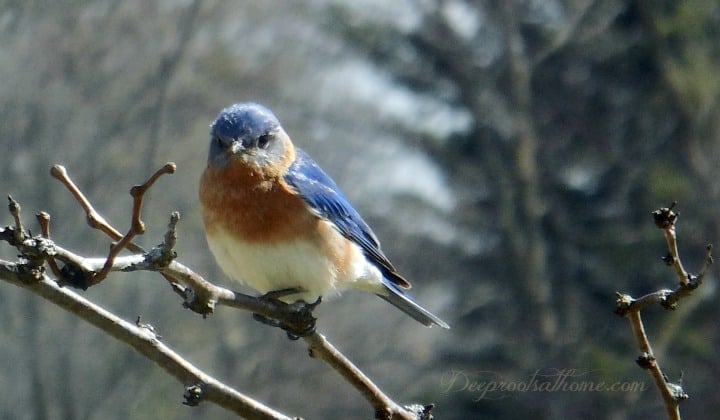 The bluebird was an American Indian symbol of happiness, good health and hope. They displayed the bird in their art and told tales of its beauty and humility in their folklore. They hung hollowed out gourds over their refuse piles and meat drying areas to house the bluebirds, which would eat pesky bugs attracted to such places.

From 1920-1970 there was a major decline in the bluebird population. The bluebird went from being as common as the robin, to being so rare that birders were sure of its inevitable extinction.

Near Demise of the Bluebird

There were many reasons for the decline, including loss of habitat, pesticide use, weather changes, snag (dead tree) removal, and an influx of house cats. However, the main reason for the population decline was the introduction of the English House Sparrow into America, being extremely competitive and aggressive.

In 1978, the North American Bluebird Society was formed by citizen scientists and birders concerned about the drastic decline in the bluebird population. They optimized bluebird boxes and set up a network of trails in which to put up boxes and monitor the numbers and health of the population. They educated the public and trained volunteers as monitors. The result is almost fairy-tale. The bluebird population rebounded and stabilized, escaping extinction. [1]

This year with only 2 bluebird houses in the our backyard, we have been watching 4 competing mated bluebird couples since early spring.
One of the couples immediately occupied the birdhouse that my husband’s father made for me years ago, but not without a lot of difficulties with the English house sparrows who wanted to displace them.

In the second bluebird house, the sparrows eventually did win out. Even after repeated removal of the sparrow’s nesting materials, we couldn’t discourage the interlopers, much to our dismay!

Soon, there wasn’t any sign of the other bluebirds as they had flown off to find new nest sites.

The successful bluebird couple started staking out their nest box in early March; apparently it’s the female that makes the final choice for the nest site. That sounds just like a human couple, doesn’t it?

It took weeks of gathering soft grasses and a few pine needles, and during this time the intensity of fights with the sparrows increased. But our stalwart, feisty parents stood their ground determinedly for their nest box and later for their young. 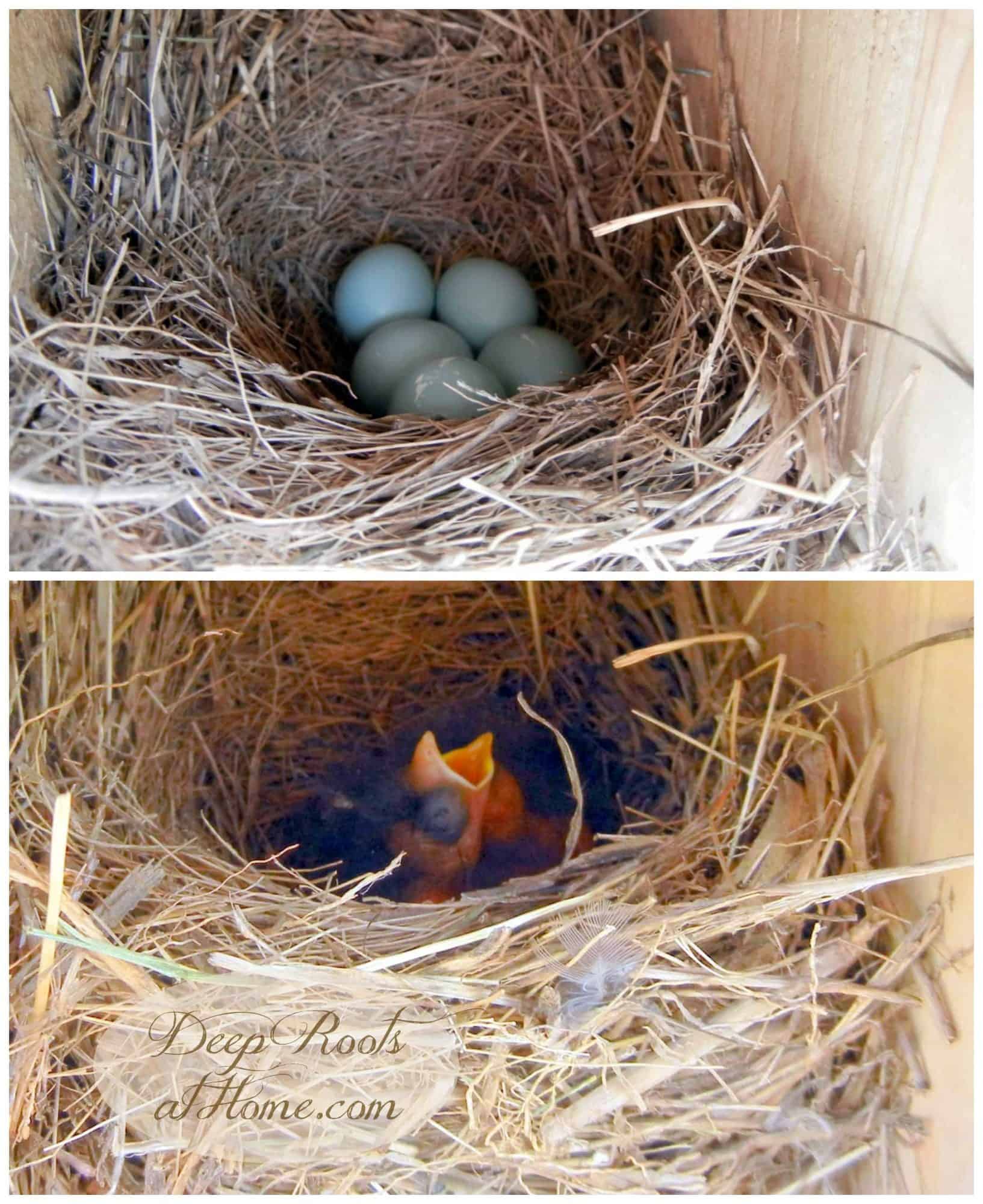 By the 14th of May, we were delighted and grateful to find 5 dull blue eggs all in a cluster.

My husband volunteered to open and close the movable front panel of the birdhouse once the eggs were laid so I could have my hands free to shoot some close-ups. Interestingly, the Mama and Papa let down their guard after a few days as we did them no harm.

Both parents fed the nestlings at least twice an hour. The activity at this point was constant and so much fun to watch!

Do you think they feed their babies through the night like we Moms sometimes need to do?

Watching this instinctive life-struggle of the birds gives us a richer appreciation of what both human fathers and mothers do as parents for their offspring. The birds have their God-given instincts to raise a brood.

While we humans have different emotions and reasons for having children, we aren’t driven by instinct. There are so many more things to consider and be aware of. For the Christ follower, it is not just survival of the fittest. We are raising eternal souls. 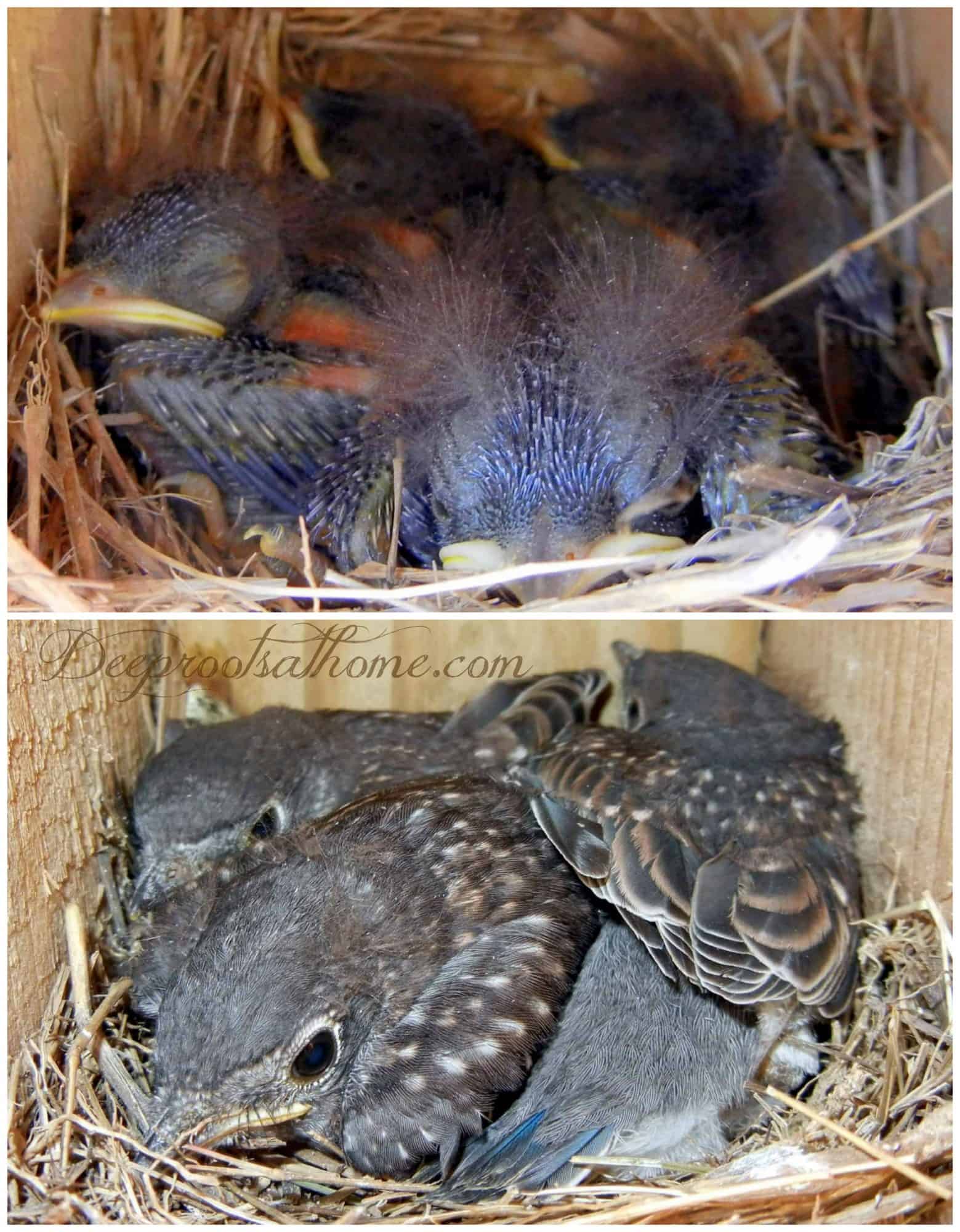 It is not uncommon that bluebirds are killed by sparrows as they defend their home. It is against many odds that their little nest will survive, yet they somehow do.

Christian parenting is much like that – it’s a spiritual battle to raise our children and, against the odds, we hope to see them fly away to honor Christ with their whole heart and be influencers for good in this evil world.

The bluebirds have weeks to raise their young; we humans have a few fleeting years.

Looking back, they are gone so quickly.

Thankfully, God has gone way further with us humans in that we have been offered eternal life through His Son Jesus, and counsel from the whole Word of God- the Bible – and more.

As the called of Christ, we must be diligent to model servanthood, mold our children’s hearts to see their need for the Savior, develop an internal self-governor in the power of the Holy Spirit, and to teach them the whole Word of God.

Let’s be on our knees every day seeking wisdom, mercy, and grace for this marvelous and daunting task.

Someday your children will leave your protection and guidance. Until then, stand firm in the armor of the Lord as spoken of in Ephesians 6: 10-18. With prayer and His grace and power to help us, we can do this noble job set before us to raise up a next generation of godly children.

“And even the very hairs of your head are all numbered. So do not be afraid; you are worth more than many sparrows. Therefore everyone who confesses Me before men, I will also confess him before My Father in heaven.…“

For free directions to build a sturdy bluebird house with only (1) 6′ length of 1″ x 6″ cedar, go here. The frequent checking of bluebird nests is said to discourage sparrows from killing the young and even sometimes an adult! For a bit of interesting history on sparrows and ‘how to’ on bluebird nests, go here. 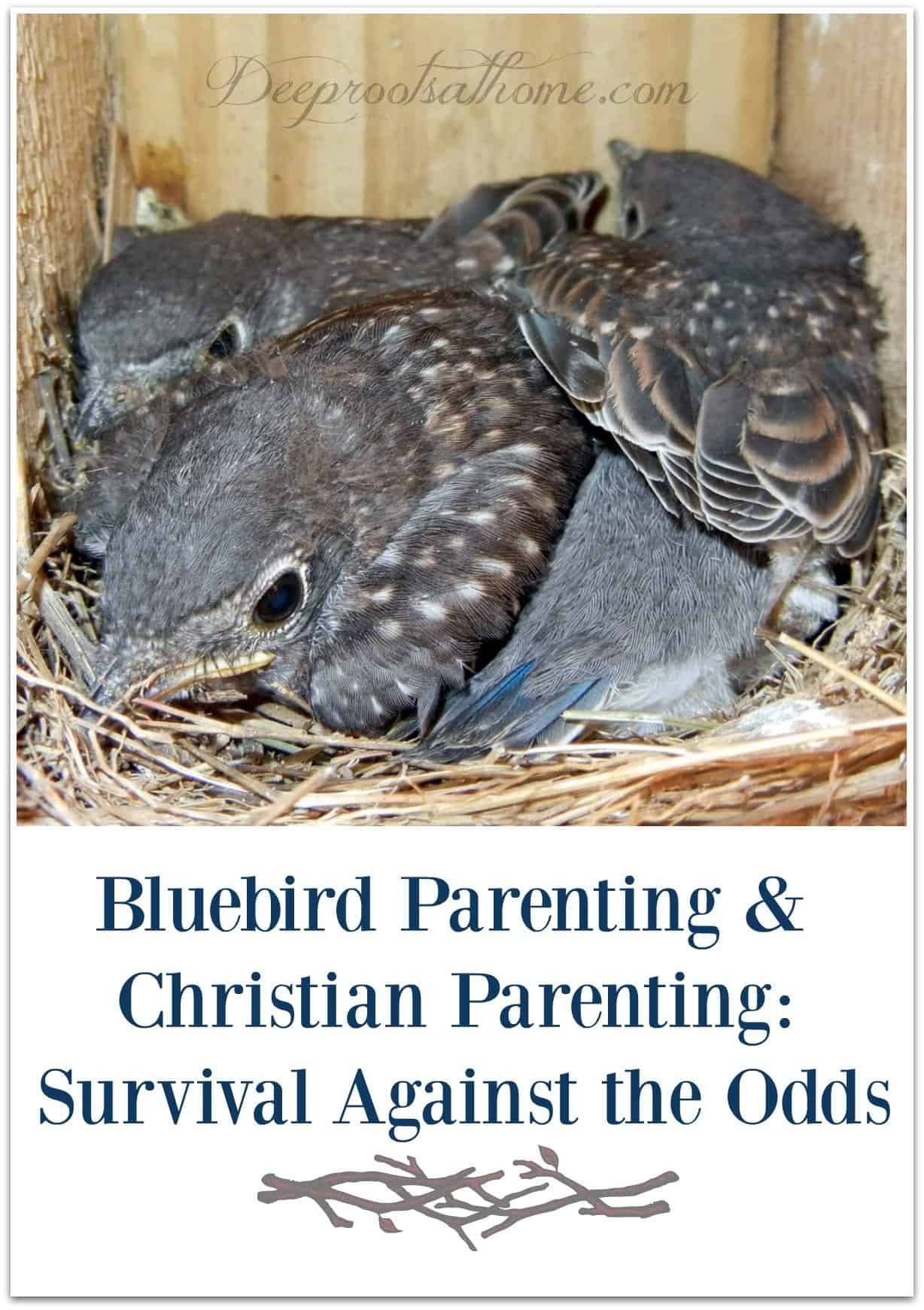