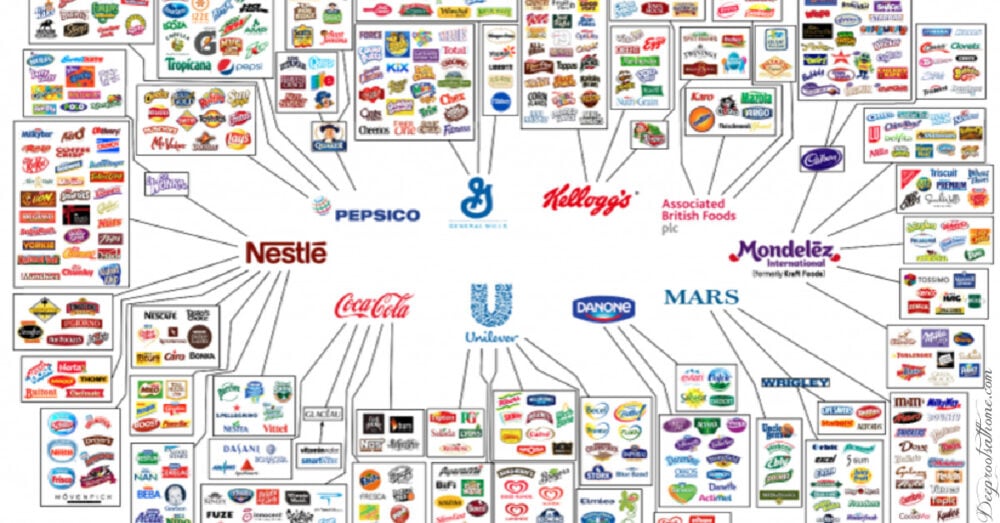 The more we know about who owns and controls our food, the more we can support trustworthy companies.

When our children were young (1991-2005), these wonderful (often family-owned) health food companies were often my go-to because I trusted them and the ingredients. So their sell-outs came as quite a surprise. Healthy, environmentally-aware brands have seen huge sales growth in recent years, and big names like Coca-Cola, PepsiCo, Nestlé, and General Mills all want a piece of the action.

These alternatives cost more but people were willing to pay, in large part because they saw these brands as being smaller, healthier, more responsible choices.

A lot of these “niche” companies are now owned by the very corporations many shoppers are trying to avoid.

As experts like Philip Howard at Michigan State University have stated, big companies tend to tinker with formulas to make them easier to mass-produce and cheaper.

Here are some natural and organic brands that have gone “mega-corporate” in recent years.

1. Cascadian Farm had reputably been around for so long, you couldn’t help but think it a trusted source of organic products, but it was actually bought out by General Mills in 1999. They quickly tripled the sugar content in their once “no added sugars” cereals.

2. Applegate Farms, the top distributor of organic meat in the U.S., was sold to Hormel (one of the most atrocious pro-GMO meat companies out there) in 2015.

4. Burt’s Bees was once a fabulous independent, truly natural company – until the company was sold to Clorox.

5. Horizon (which used to be completely organic dairy) was swallowed up by WhiteWave and are now subject to complaints and investigations alleging they’re more of a factory farm type of operation than an “organic” company.

6. Annie’s (best known for their mac-n-cheese) was bought by General Mills in 2014. This company does not state whether the cheese comes from cows that were fed GMOs or recombinant bovine growth hormone (rBGH), a synthetic (man-made) hormone that is marketed to dairy farmers to increase milk production in cows.

7, Bragg Live Foods, established in 1912, announced in 2019 the company was acquired by investment firm Dragoneer Investment Group and co-investors including singer/songwriter Katy Perry.

8. Earthbound Farms, the largest supplier of organic produce in the U.S., was also purchased by WhiteWave back in 2013.

9. R.W. Knudson’s  is another one of those companies who has been around forever, but what most don’t realize is the organic juice maker is owned by Smucker’s, who publicly supports the use of GMOs.

10. Dagoba Chocolate has a brand that looks like a free-spirit, independent company, but it’s actually owned by the chocolate giant Hershey’s. Hershey’s chocolate is known for it’s high sugar content, low cocoa content, and off vomit-like flavor.

11. Honest Tea & Odwalla Honestly, I could not believe either of these companies sold-out to Coca Cola.

12. Dave’s Killer Bread is the latest great company to sell out for a whopping $275 million dollars. Basically Dave Dahl handed over his baby to the pro-GMO food corporation Flowers Food (owners of Wonder Bread) so he could “sit back and relax”.

14. Boca and Back to Nature are both owned by Kraft.

15. Tom’s of Maine is actually under Colgate/Palmolive.

18. Erewhon, with its organic sounding name, is actually owned by Post Foods.

19. New Chapter, once a very popular maker of natural vitamin supplements, it was taken over by Proctor and Gamble. This is a real shock and a huge concern for the future of the brand’s quality control. 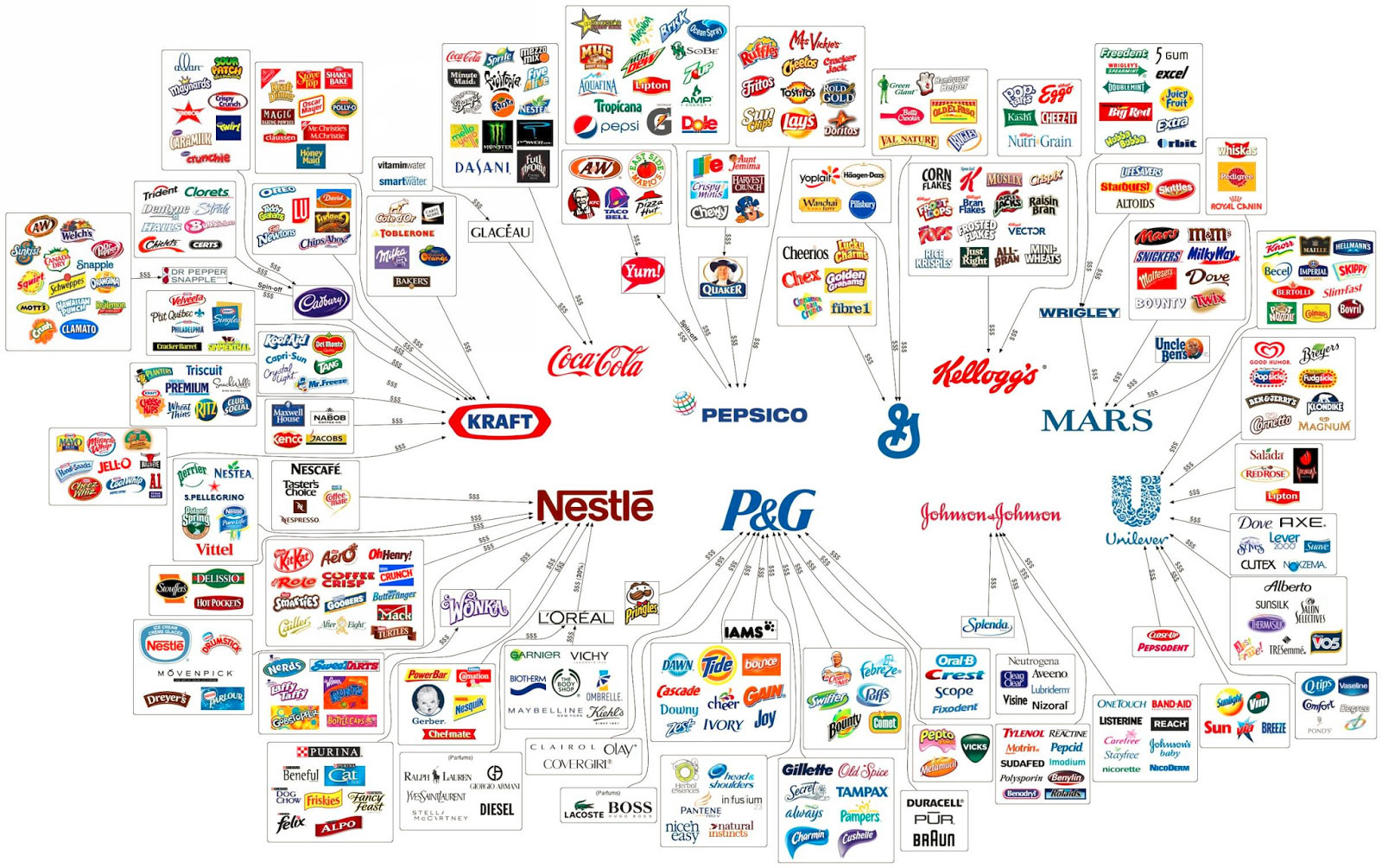 Here is a list of organic and non-GMO companies who all sold out and when:

Proactive Steps To Lessen Our Dependence on These Companies

1. Start gardening. For anyone that has planned to start a garden (or put up food stores) but is still on the fence, please read The Solari Report’s “New Controlled Food System Is Now In Place And They Will Stop At Nothing To Accelerate Their Control.” I have numerous gardening posts to get you started here, here, here, here, and here, including how to build a strong trellis and 4×8′ raised beds.

2. Soon I hope to write about the mega corporations that own and control our favorite supplement brands. This is not a good development, so I urge you to learn more about how to make your own medicinals (tinctures), use safe antiviral and antibacterial herbs, and investigate homeopathy! Build your immune system so you don’t need them. My family and I regularly use a cellular detox called TRS. You can also read Avalyn’s Story to learn more.

There are still companies out there that are using safe and healthy ingredients, but it takes diligent label reading to discern that. Let’s support them when we find them. Please list ones in comments that you know to be family-owned and where we can find them.

Now for the good news!

There are some companies who may still be holding strong.

I have NOT been able to vet each one. IF they have SOLD OUT, let me know in the comments so I can make a note like I did with Clif Bar. Thanks for understanding!

•  Clif Bar –  the company was privately held until 2022 when it was acquired by Mondelez International for $2.9 billion.

To all those quality companies principled and independent enough to continue on, thank you!

“I have relied on you all my life; you have protected me since the day I was born. I will always praise you.“ ~Psalm 71:6

Beat coughs and colds with this free guide!

Share
Telegram
Pin
« What Erica Did When Her Daughter Got Dish Soap In Her Eyes
Hocus Pocus: Do You Still Want Your Children To Love Disney? »