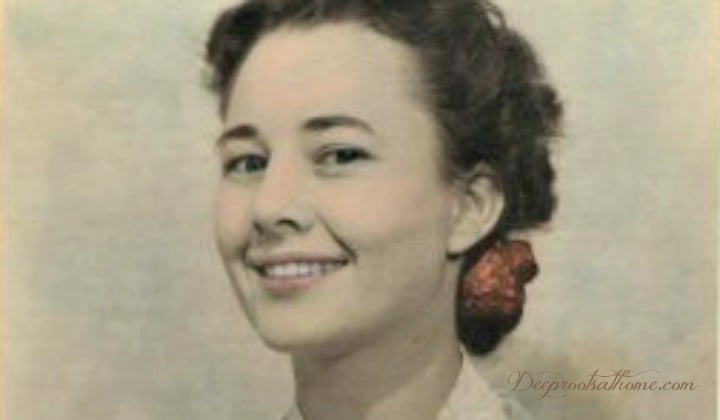 Sometimes we just need to know there are others that have gone through terrible, hard things and gone on to thrive! And if we understood how good most of us really have it, we wouldn’t be so prone to b downcast or to complain.

Our family first heard of Darlene Rose’s story on Focus on the Family 16 years ago. We listened almost holding our breath, it was so amazing and raw, and so I bought her story on a set of 2 cassette tapes (before CDs). We poured over them again and again through the years on the road or during lunch clean-up as a part of our homeschool.

Evidence Not Seen: A Woman’s Miraculous Faith in the Jungles of World War II is a powerful and riveting true story. It chronicles the early years of Darlene Deibler Rose as a new bride with her husband, Russell Deibler, as they minister in the jungles of New Guinea in 1938.

As WWII and the Japanese army invade that corner of the world, they are drawn up into circumstances that would crush or kill most of us. Taken from the native peoples they love – and separated from one another – they spend 4 years in a Japanese POW camp in the most terrible of surroundings.

Where was the evidence of God’s mighty hand?

Before WWII: Doors Open To Go

On one of Russell’s survey visits to Papua, New Guinea, the native chieftain he was talking with said he believed Russell and the others with him were spirits because they were all men. “Who gave birth to you?” he asked as if to say, “Where are the women”? Russell explained that he did have a wife, but his “chieftain” said she could not come because the trail was so dangerous that many men had died. The chieftain replied, “Your wife would have made it. Wherever we go, the women follow and carry the loads.” He said if she were so weak she could not make it, he would send men to help her.

Meanwhile, others of the tribe decided to test whether some of the men were spirits or human by shooting arrows at them to see whether the arrows passed through or killed them, and, unfortunately, some of the tribe members were killed when the government officials who were along shot them in self-defense. On reading this in a letter from Russell, Darlene prayed, “Lord, if those people are ever to believe and understand about you, women are going to have to go there.”

Immediately she felt an assurance that she was supposed to go. She dashed out to find their mission leader, who said he had a letter from Russell giving his consent for her to go.

At her first meeting with the people, they shoved her sleeve up to see if her arms were white “all the way up” and wanted to pinch her flesh to see if it was real. The chieftain did not believe she was a woman until she took off her hat and took the pins out of her heir, letting her hair fall over her shoulders. From the first moment she felt that these were her people, and she approached them and the living conditions with grace, courage, and humor.

By May of 1940, they heard that Nazis had invaded Holland; it fell within five days. Soon word came from government officials that their post must be evacuated, though they begged to stay.

They moved to Macassar, Indonesia, and within five months learned that their post was to be reopened. But then Russell was appointed assistant field chairman by a unanimous vote of the other missionaries. Russell and Darlene were both grief-stricken, but felt it was the Lord’s will, and reminding themselves that they had been willing to go anywhere, remained in Macassar.

War At the Door

Meanwhile, they heard news of war increasing until finally Pearl Harbor was attacked. They sought the Lord’s counsel as they continued to work and hear news reports of the Japanese taking islands near to them.

One day a Dutch policeman came and told the missionaries that they had a ship on the coast and wanted to evacuate all foreigners as well as Dutch women and children. Their field chairman, Dr. Robert Jaffray, encouraged them all to take time to pray about whether the Lord would have them stay or go so that they would have His assurance, whatever happened, that they were right where He wanted them to be.

None felt led to leave.

Three days later they learned that the ship had been torpedoed and sunk with no survivors.

Where Did They Take The Men?

By March 8, 1942, their island had been taken by the Japanese. They let them stay together for a while, until one day they suddenly came to take the men. Russell’s last words to Darlene were, “Remember one thing, dear: God said that he would never leave us nor forsake us.” She never saw him again.

The women were eventually taken to a prison camp, where the bulk of the book takes place. There is not space here to tell of many of the experiences, but God proved Himself faithful many times over, protecting, assuring of His Presence, answering prayer.

The camp commander, Mr. Yamaji, was notoriously cruel. Yet God gave Darlene some measure of favor in his eyes. When news came that Russell had died, Mr. Yamaji called Darlene to his office to try to encourage her somewhat. God gave her grace to tell him she did not hate him, that she was there because God loved her…and God loved him, and perhaps He allowed her to be there to tell him. She shared with him the plan of salvation, and Mr. Yamaji broke into tears and left the room. Yet from then on she felt he trusted her, and years later she heard a report of him that seemed to indicate he had trusted the Lord.

Some time later, Darlene was arrested by the secret police and taken to another prison for “questioning.” The conditions were horrible, to say the least, and Darlene also suffered from dysentery, cerebral malaria, and beriberi. She asked the Lord to heal her of dysentery — and He healed her of all three ailments. One day she saw out of her window someone secretly passing along some bananas to one of the other women. She was in solitary confinement and knew she would never receive one, but she began to crave bananas: though she had been healed, she was still starving. Surprisingly, Mr. Yamaji came to the prison to see how she was doing and to tell the secret police that she was not a spy. After he left he had ninety-two bananas delivered to her! Ninety-two days later, when she ate the last blackened banana, she was released back to the prison camp.

There was little evidence that God was there in that place, except for the faith at work in her heart. Her faith was alive with the power of God as she touched lives all around her.

“Now faith is confidence in what we hope for and assurance [evidence] about what we do not see.” ~Hebrews 11:1 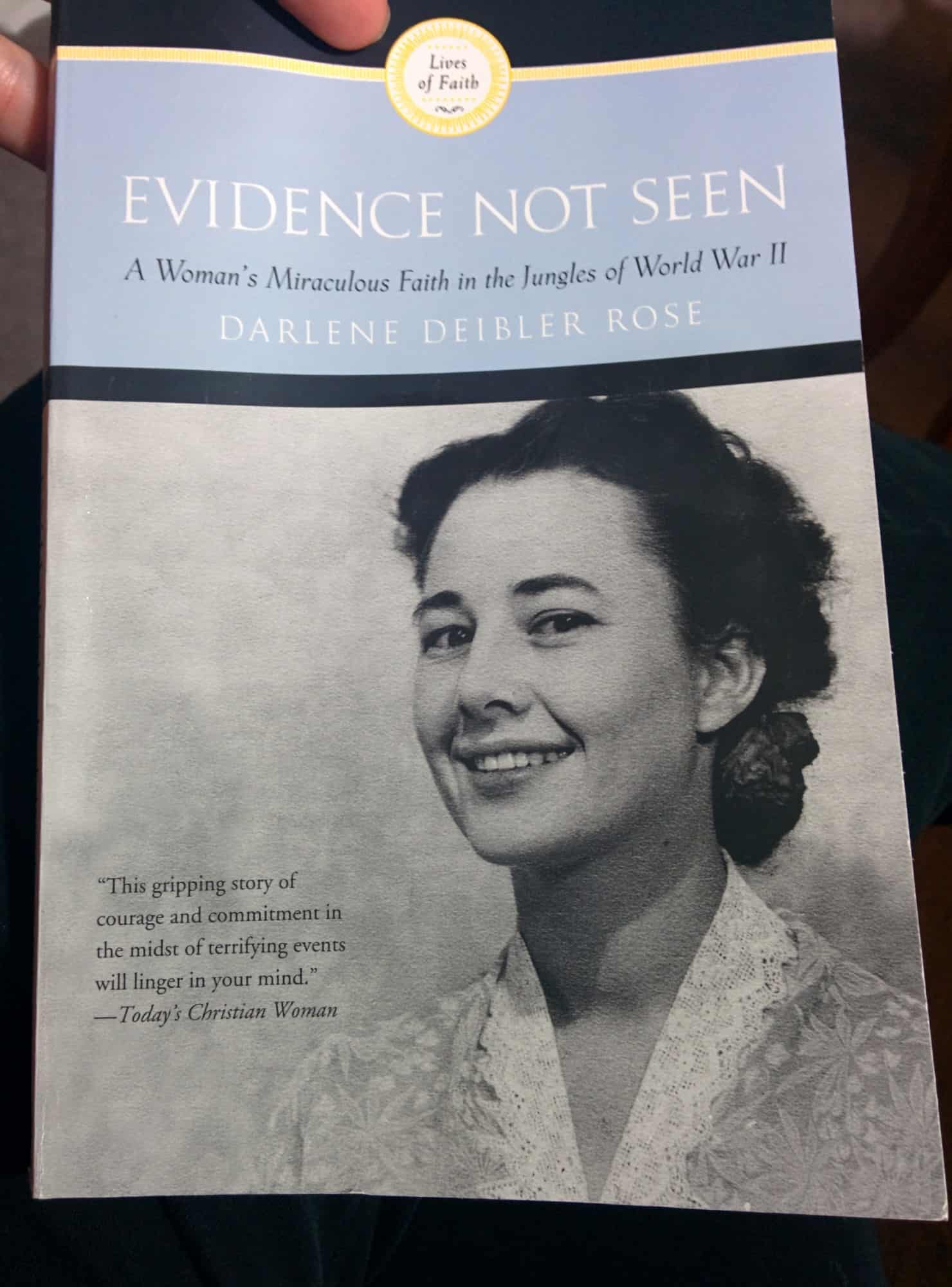 I won’t give away any more of the story – you’ll just have to read the book. Our whole family loves Darlene Rose, and there were tears when we heard the news of her death. On Tuesday, February 24, 2004, this dear saint laid her head back, smiled that special little smile and closed her eyes.

Her unforgettable book, Evidence Not Seen remains my and my daughter’s all-time favorite. You will always remember Darlene Rose. I will say, she is one of the first we hope to visit with in glory!

Surely, Corrie ten Boom saw the evidence, for she said, “There is no pit so deep, that God’s love is not deeper still.”

You can listen to Part 1 of Darlene’s story (as told by her in her 70s) here.

“When evildoers assail me
to eat up my flesh,
my adversaries and foes,
it is they who stumble and fall.
Though an army encamp against me,
my heart shall not fear;
though war arise against me,
yet I will be confident.” 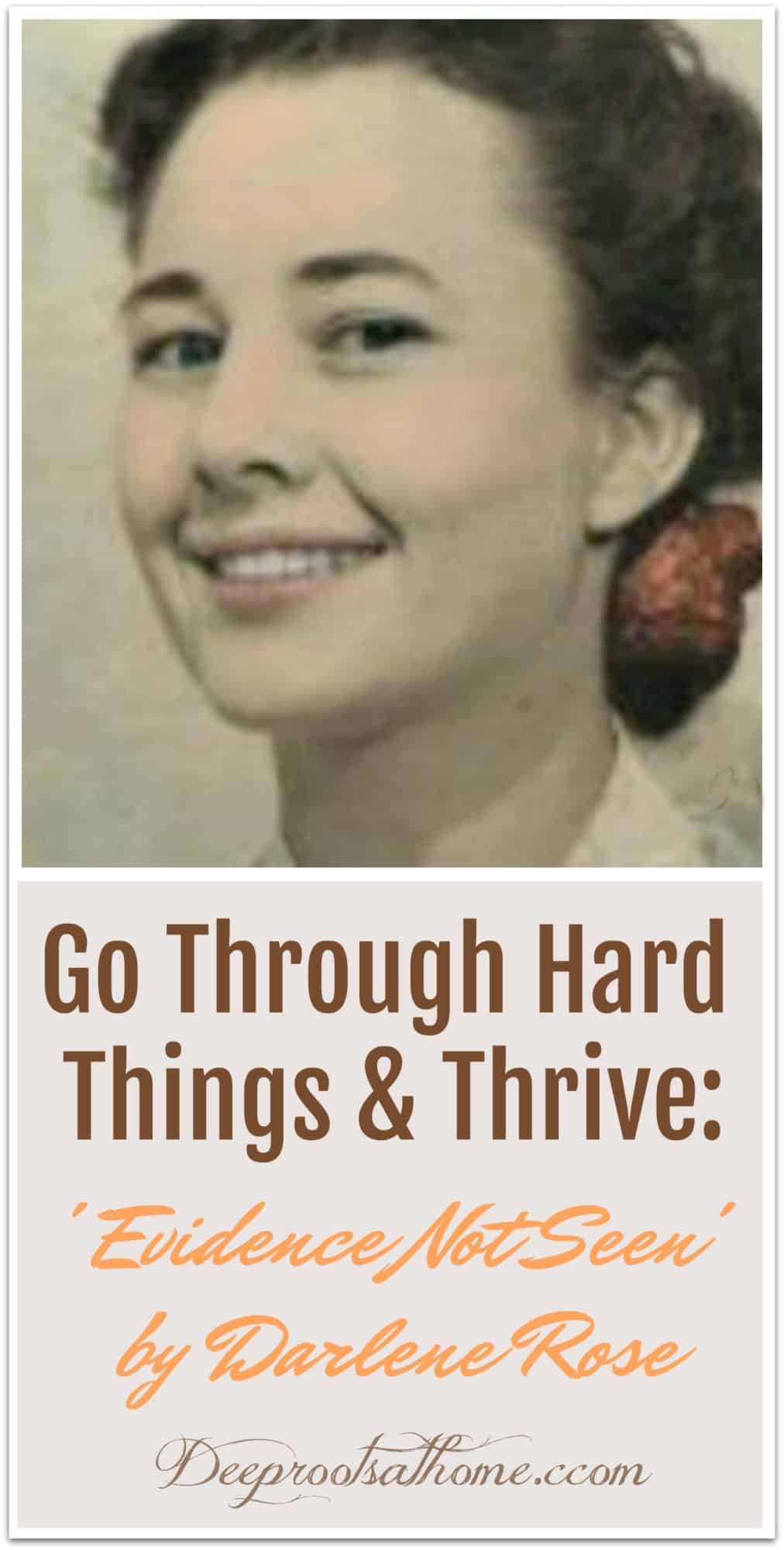