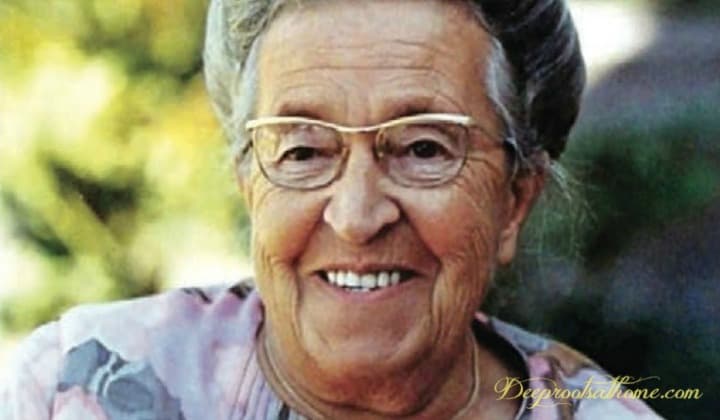 Oh, I love this woman Corrie ten Boom! Her words are simple and yet profound and filled with wisdom. We must not lose them. They are as rich in analogy and as pertinent today as back in 1974.

I sometimes read a snippet of one of her wonderful books, weaving it into my day, just for encouragement and to get my perspective right.

Yesterday while reading, accompanied by the rich aroma of dehydrating tomatoes, I felt I should share some short stories from her life, that God might somehow use them.

This remarkable woman epitomizes the love of God despite a life that many of us would call terribly hard – no husband, no children, witnessing Holland and all of Europe be swallowed up by the Nazi regime before and during WWII, and then the concentration camps and loss of her family for hiding the Jewish people in their home!

After her release, she spent the rest of her life traveling all over the world, captivating audiences with her inspiring stories.

The following are just a few excerpts that I think are worth remembering. Her books will increase your faith in Christ as do those of another hero of mine, Darlene Rose.

It was at a church service in Munich that I saw him, a former S.S. man who had stood guard at the shower room door in the processing center at Ravensbruck. He was the first of our actual jailers that I had seen since that time. And suddenly it was all there – the roomful of mocking men, the heaps of clothing, Betsie’s pain-blanched face.

He came up to me as the church was emptying, beaming and bowing. “How grateful I am for your message, Fraulein.” He said. “To think that, as you say, He has washed my sins away!” His hand was thrust out to shake mine. And I, who had preached so often to the people in Bloemendaal the need to forgive, kept my hand at my side.

Even as the angry, vengeful thoughts boiled through me, I saw the sin of them. Jesus Christ had died for this man; was I going to ask for more? Lord Jesus, I prayed, forgive me and help me to forgive him. I tried to smile, I struggles to raise my hand. I could not. I felt nothing, not the slightest spark of warmth or charity. And so again I breathed a silent prayer. Jesus, I prayed, I cannot forgive him. Give me Your forgiveness.

As I took his hand the most incredible thing happened. From my shoulder along my arm and through my hand a current seemed to pass from me to him, while into my heart sprang a love for this stranger that almost overwhelmed me. And so I discovered that it is not on our forgiveness any more than on our goodness that the world’s healing hinges, but on His. When He tells us to love our enemies, He gives, along with the command, the love itself.

How long I lay on my bed sobbing for the one love of my life I do not know. I was afraid of what father would say. Afraid he would say, “There’ll be someone else soon,” and that forever afterwards this untruth would lie between us. “Corrie,” he began instead, “do you know what hurts so very much? It’s love. Love is the strongest force in the world, and when it is blocked that means pain. There are two things we can do when this happens. We can kill the love so that it stops hurting. But then of course part of us dies, too. Or, Corrie, we can ask God to open up another route for that love to travel. God loves Karel, even more than you do, and if you ask Him, He will give you His love for this man, a love nothing can prevent, nothing destroy. Whenever we cannot love in the old human way, God can give us the perfect way.”

I did not know that he had put into my hands the secret that would open far darker rooms than this; places where there was not, on a human level, anything to love at all. My task just then was to give up my feeling for Karel without giving up the joy and wonder that had grown with it. And so, that very hour, I whispered a prayer, “Lord, I give to You the way I feel about Karel, my thoughts about our future, everything! Give me Your way of seeing Karel instead. Help me to love him that way. That much.”

One day a young Flemish girl, who had repented and received deliverance from lust and impurity, came to me. “Even though I have been delivered, “she said, “at night I still keep dreaming of my old way of life. I am afraid I will slip back into Satan’s grasp.”

“Up in that church tower,” I said, nodding toward the belfry, “is a bell which is rung by pulling on a rope. But you know what? After the sexton lets go of the rope, the bell keeps on swinging. First ding, then dong. Slower and slower until there’s a final dong and it stops. I believe the same thing is true of deliverance. When the demons are cast out in the name of the Lord Jesus Christ, or when sin is confessed and renounced, then satan’s hand is removed from the rope. But if we worry about our past bondage, satan will use this opportunity to keep the echoes ringing in our minds.”

A sweet light spread across the girl’s face. “You mean even though I sometimes have temptations, that I am still free, that satan is no longer pulling the rope which controls my life?”

“The purity of your life is evidence of your deliverance, “I said. “You should not worry about the dings and the dongs, they are nothing but echoes.”

Demons seldom leave without leaving behind their vibrations – dings and dongs. It is as if they give the clapper one big swing on the way out, scaring us into thinking they are still their. They know that, even though they have to flee at the Name of Jesus, if we grow fearful over the remaining echoes, other demons can come in and take their place.

The Bible promises that after we confess and renounce our sins, God cleanses us from them by the blood of Jesus (Hebrews 8:12). However, we can do something God cannot do. We can remember our old sins. These are the dings and the dongs of our past life. When we hear them we need to remember that through Jesus’ sacrifice on Calvary, satan can no longer pull the rope in our life. We may be tempted, we may even fall back occasionally, but we have been delivered from the bondage of sin. And even though the vibrations may still sound in our lives, they will grow less and less and eventually stop completely.

Once satan has been cast out of the house of your life, he cannot return as long as you walk in obedience. Your body is the temple of the Holy Spirit. However, that does not prevent him (or his demons) from standing outside the house and shouting through the windows, saying, “We’re still here!”

But, hallelujah, we know satan for who he is – the prince of liars. He is not still here – he has been cast out. So whenever you hear one of those old echoes in your life – one of those dings or dongs – you need to stop right then and say, “Thank you, Jesus. You have bought me with your blood and sin has no right to sound off like in my life.” 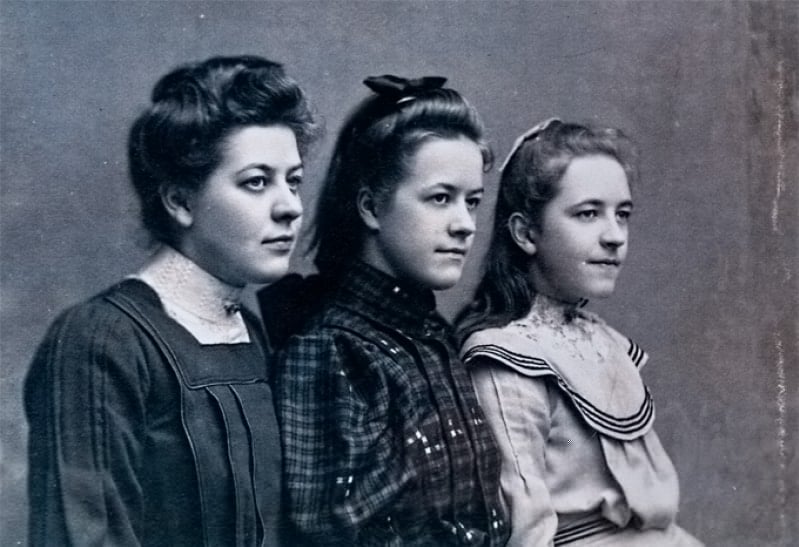 Corrie tells the story of a conversation she had with her father when she was a child. She confided in her father that she was afraid of death and was quite sure she did not have the strength to be a martyr. Corrie’s father reminded her of the train ride to Amsterdam. “”When you take a train trip to Amsterdam, when do I give you the money for the ticket? Three weeks before?”

“No, Daddy, you give me the money for the ticket just before we get on the train.”

“That is right,” her father said, “and so it is with God’s strength. Our Father in Heaven knows when you will need the strength . . . He will supply all you need just in time.”

Many years later, Corrie, her sister Betsy, and their father were imprisoned in Nazi concentration camps for hiding Jews in a secret room in their home. Corrie’s sister and father passed away during their imprisonment. Corrie was released from Ravensbrück, due to a clerical error, just a week before all the women her age were killed. She spent the rest of her life traveling the world, telling people “there is no pit so deep that God’s love is not deeper still.” Corrie died at the age of 91.

Thankful, Corrie had many years to share her wisdom with us. May you grow in your faith in the Lord Jesus, my friend!

“There is no pit so deep, that God’s love is not deeper still.”
~ Corrie ten Boom

Another book worth reading by Corrie ten Boom: 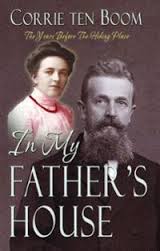 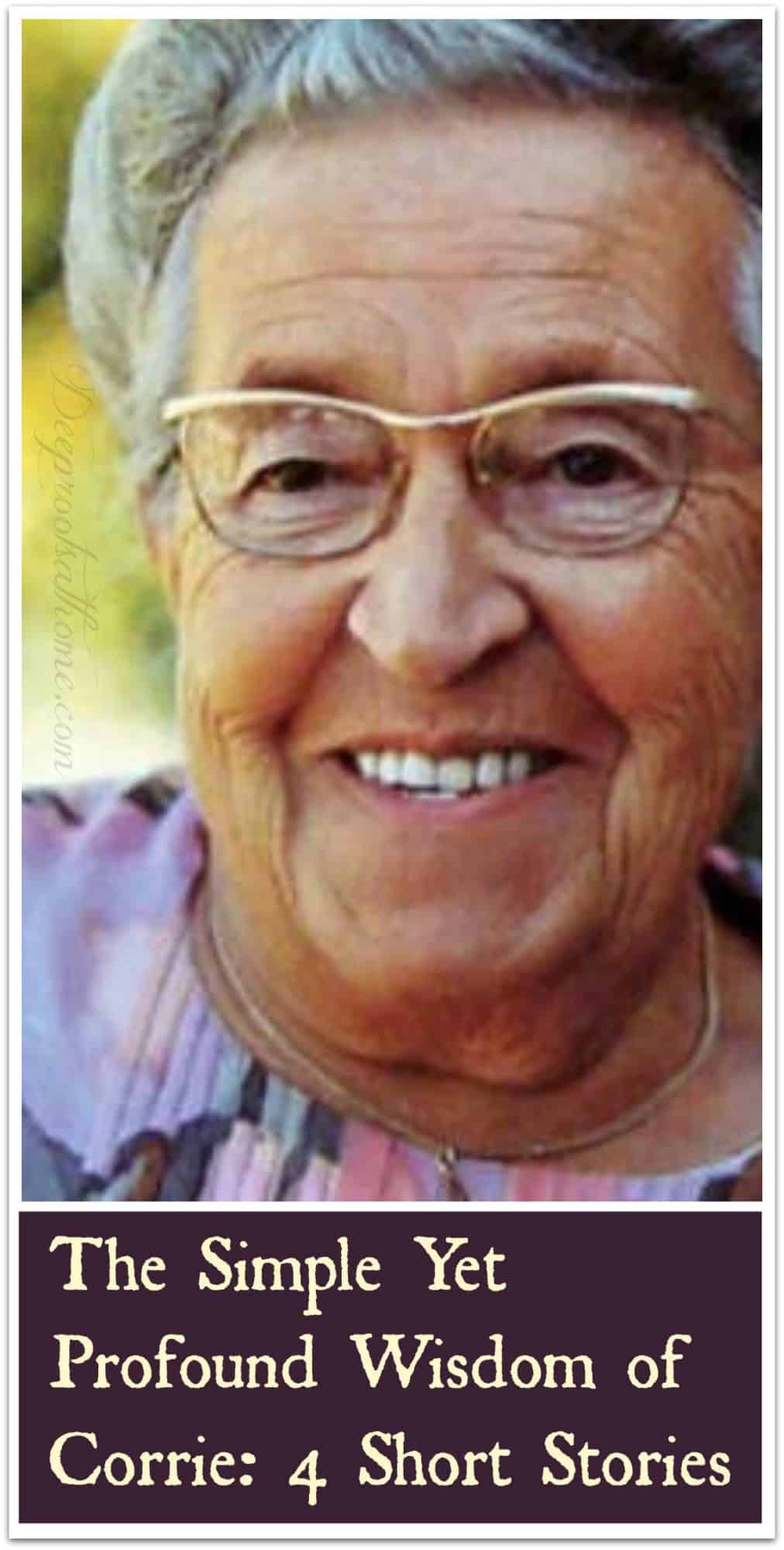