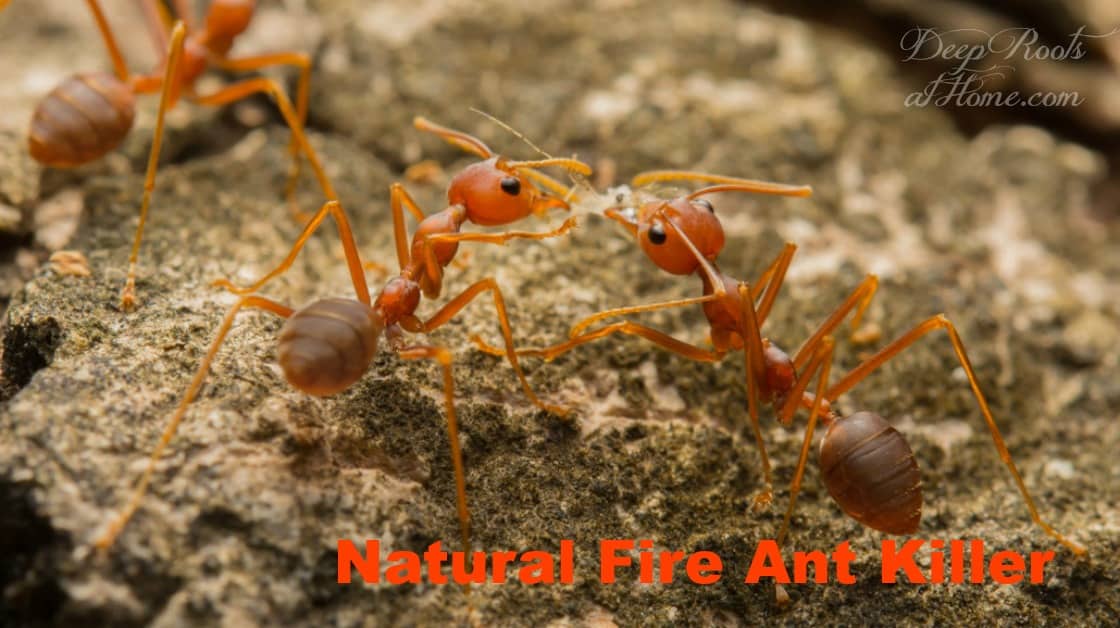 Research the active ingredient of the most popular fire ant killer brands on the market: Hydramethylnon.

If the stuff is sold at Home Depot or used on school playgrounds, it must be safe, right?

Sadly, our modern society seems obsessed with convenience and quick fixes, rarely taking the time to stop and think about the long-term consequences of an action.

Hydramethylnon is popularly used as an insecticide for cockroaches, wasps, and ants. It is in many popular brands of fire ant killer including:

According to the National Pesticide Information Center, the EPA classified hydramethylnon as a possible (group C) human carcinogen due to the development of tumors of the uterus, adrenals, and lungs in rats.

Researchers are learning a great deal about how vulnerable children’s brains are to pesticides during fetal and early childhood development. “These delicate developmental processes are easily disrupted by very small doses of toxic chemicals that would be virtually harmless for an adult,” says Dr. Philip Landrigan, a professor of pediatrics at the Mount Sinai School of Medicine in New York.

This includes herbicides to kill weeds and insecticides such as those sprayed to manage ants, cockroaches or other pests.

Pesticides Get Inside Your Home

A 2001 study found that a week after lawn treatment, neurotoxic chemicals could be detected on all indoor air surfaces, including tabletops and windowsills. The team estimated that indoor exposure for young children was about 10 times higher during the week after lawn application than it was in the week before the lawn was treated.

It appears these chemicals come inside homes on toys, hands, shoes, bare feet, on your pet’s feet or fur coat when Spunky rolls in the yard.

When it comes to insect pests, fire ants would probably top everyone’s list! They grasp you with their strong mouth parts and hold on while their abdomen twists upward to sting you. It took me a month to get past the intense pain from dozens of stings received in Arkansas.

Known as the piranha of the plains, fire ant can do a lot of damage. They’ve invaded over 370 million acres across the United States and Puerto Rico since the 1930s. Originally from South America, it is believed the pests first entered the country through the ship port in Mobile, Alabama. 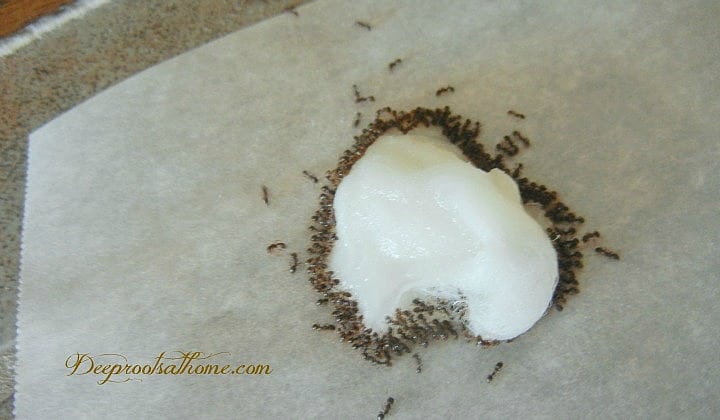 According To Orkin, Boric Acid Works 95-100% Against Fire Ants If Used Properly

When I posted how well and quickly boric acid works for regular ants in my house, I was asked if it would work for fire ants! So I began researching and found scientists and others say it works on fire ants if three things are observed (below).

While this video DOESN’T PROVE anything, watch the fire ants RUN TO the bait to feed, just like my house ants did! I am convinced that the more that feed, the greater the chance the queen will be killed. Skip the first part and go to 3:00.

Orkin Pest Control Services uses and recommends boric acid. According to Orkin, “worker ants may live as long as seven years and the queen may live as long as 15 years.” You want slow-acting bait so the ants will remain alive to carry the bait back to the nest and successfully contaminate quantities of ants including the queen.

All dilutions achieved 95 to 100% control within 8 weeks. This same study states that “Boiling water is an effective treatment for individual mounds. If it does not kill the queen, it will not eliminate the colony. Boiling water kills grass and sterilizes soil and may best be considered as a last resort.”

Note: A larger scale recipe is 1 tsp. Boric Acid to 1 cup (up to 2 cups) bait material.

Mix boric acid with bait material, put in a jar lid or bottle cap, and place gently near a nest. Put it out on a fairly sunny day, when there is a good amount of activity around the mound, so that the ants can begin to forage the bait.

You will feel good knowing that your children run and play in a yard around your home that is completely chemical free with nothing that can harm them … only help their immunity with exposure to good, “clean”, probiotic filled dirt untainted by health disrupting pesticides.

Try it, follow the 3 steps carefully, re-apply until no more ants come, wait up to 8 weeks – and if it doesn’t work, I’ll buy your bottle of boric acid 😀 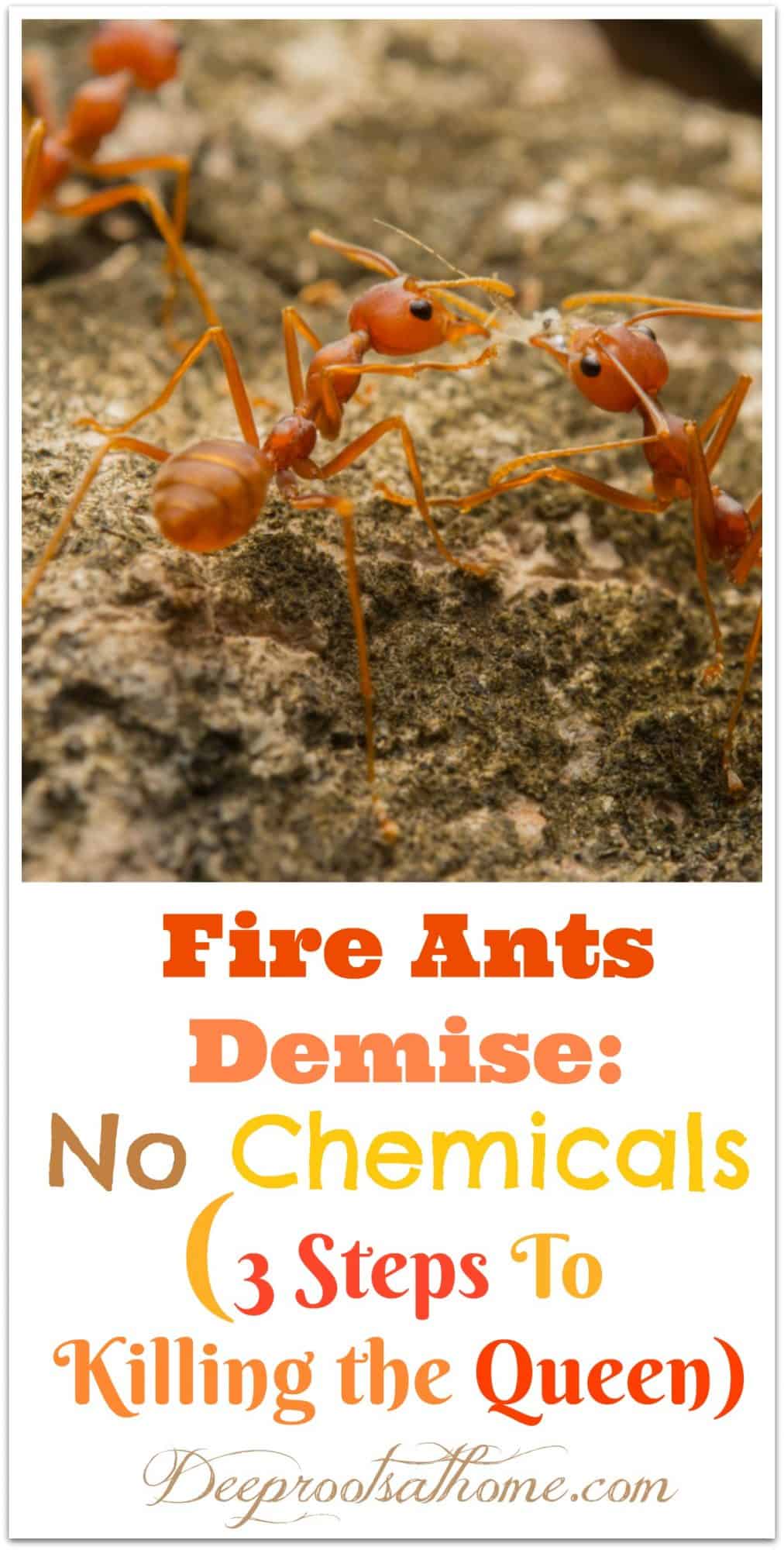