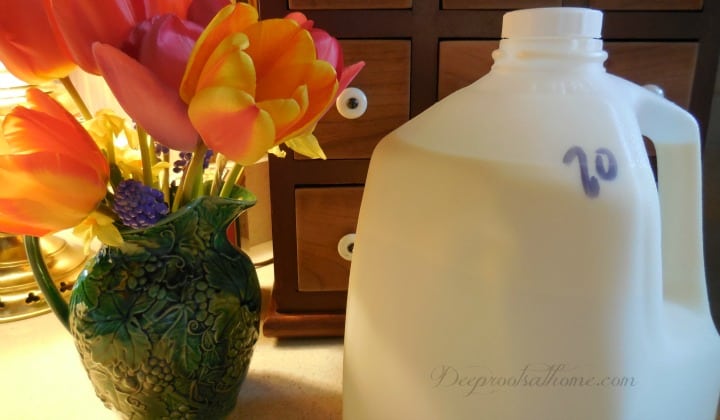 Did you know that there is so much milk produced by grazing cows in the spring that sometimes they end up dumping gallons of it?

High levels of CLA occur at no other time of year except possibly in the fall if the rains come and replenish the grass, so we jump at the chance to get this milk if it is just going to go to waste.

You may already know how beneficial raw milk is. It has been a stable food source for thousands of years. Milk or milk products are mentioned more than 50 times in the Bible, usually in connection with unusual fertility and provision from God.

Have you thought about finding a raw milk source near you for the health of your family? Well, it is getting easier to get raw milk than it used to be after heavy government crackdown.

In 7 states, it’s still illegal to sell raw milk without special arrangements like the ‘cow share program‘ or a ‘farmshare’.

States where it’s still not available either for sale, by cowshare or herdshare, or as pet milk include Delaware, Hawaii, Iowa, Louisiana, Nevada, New Jersey, and Rhode Island. (source)

Raw milk is a great way of getting one of God’s most amazing healthy foods to your table.

Late spring is the time of year, especially, that raw milk drinkers look forward to.

Raw milk is fabulous, but spring is best!

Spring grass is fast-growing and lush, extra rich in nutrients; spring milk from totally grass-fed cows has the most cream which contains the highest levels of Conjugated Linoleic Acid, Vitamin A, D, Vitamin E, and other nutrients.

The butter made from this milk contains what Weston A. Price called the ‘x’-factor, helpful in rebuilding health.

Studies showed that CLA made a marked decrease in disease activity and increased quality of life for patients with Crohn’s Disease and colitis. 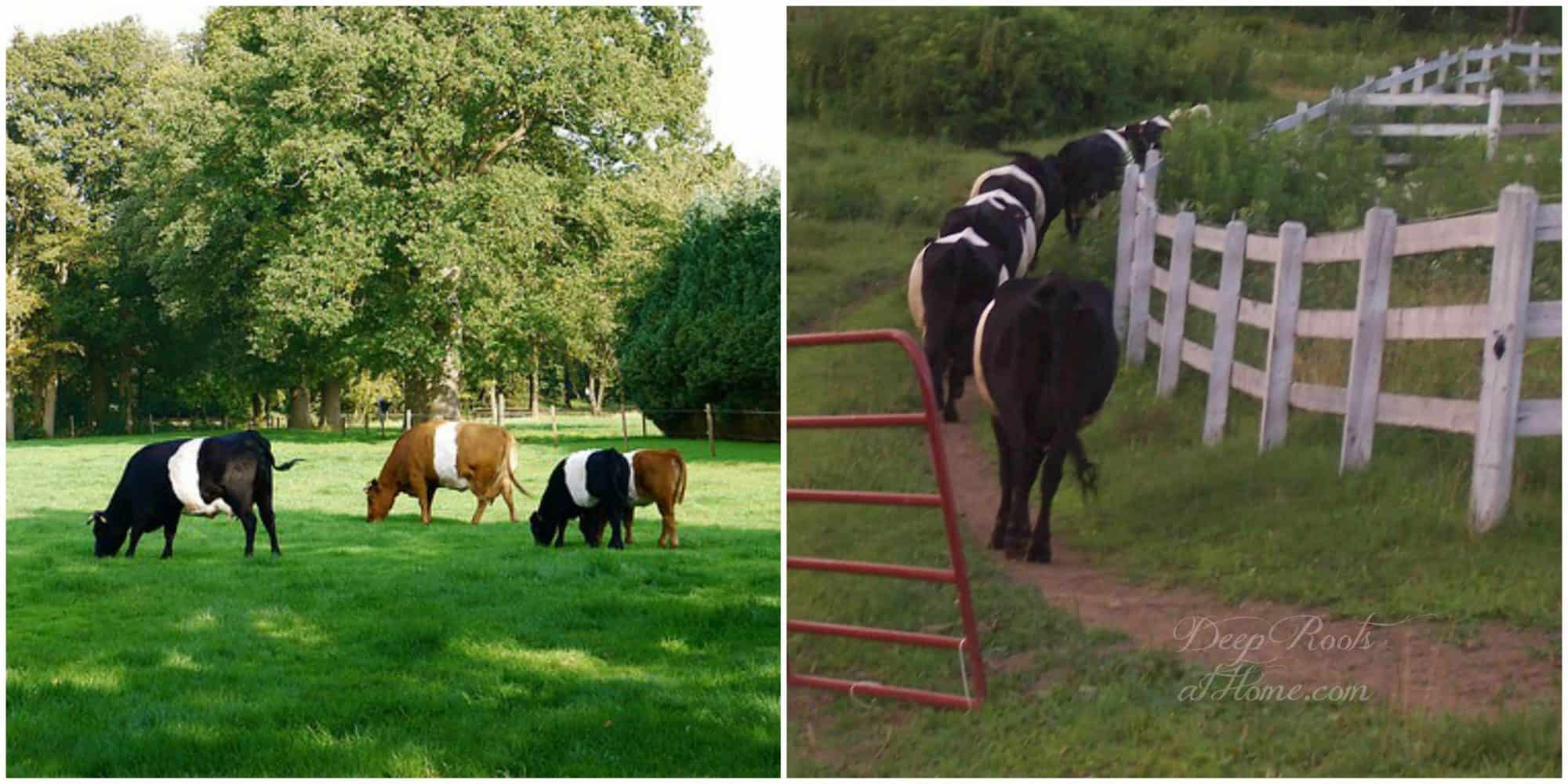 Our milk comes from cows like these Dutch Belted (source)

L.M. Montgomery, in her book Anne of Green Gables, often writes of cream. Instead of it being unhealthful as many think today, it was actually considered the best part of the milk. This gives us a little idea of what earlier generations seemed to know instinctively.

Cecily’s Aunt Janet gave her cream, instead of whole milk, because she was the weak child of her family.

Cream was given like a fortifier for sick to stimulate vitality and robust health. A “mean” character in the village would give her family skim milk (milk without the cream), so that she could profit by selling the cream. Her children were undernourished because of it.

Interesting, is it not?

We did not shake this gallon jug to show you how much cream there is in whole milk on April 20.

In late May, it may be as much as 1/3 of the gallon of rich, pesticide-free, CLA-rich cream!

Can you see the line of separation? The cream line? 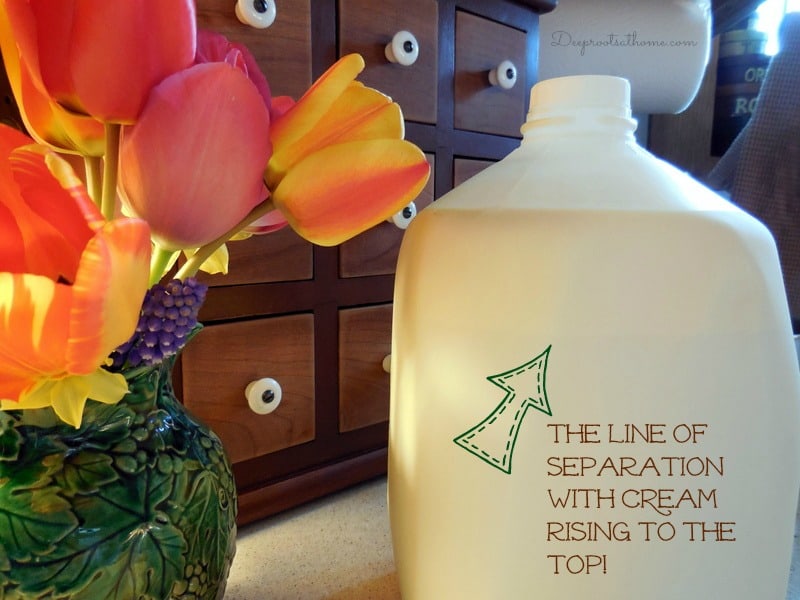 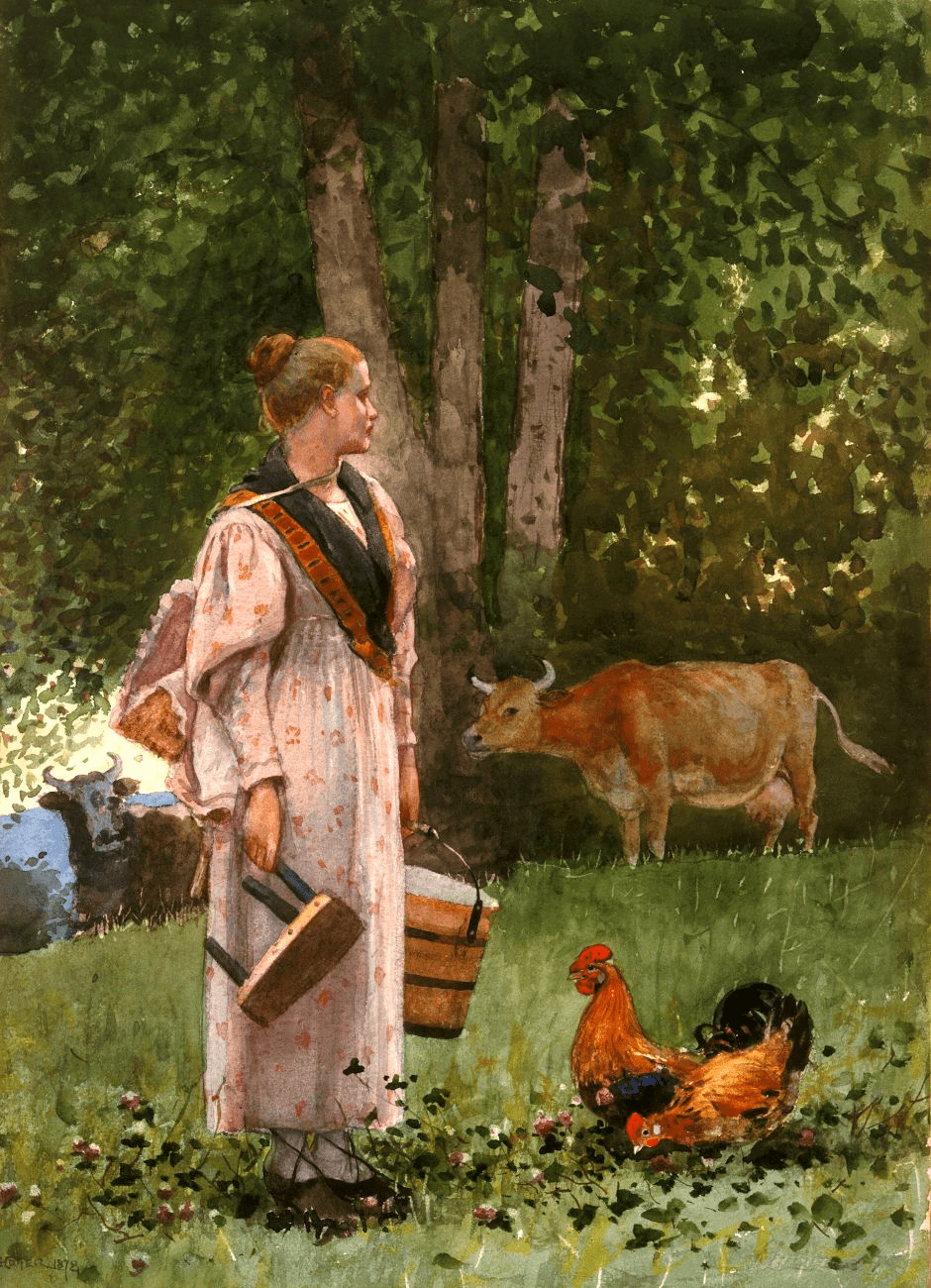 In a cow share there is an unchanging number of paying members, so in the spring everyone can get more than enough and in the drier times there is often not enough to go around. There is a challenge for the grass-based dairy farmer, and it is having enough milk for all the cow-share members during the drier summer months and during the winter.

Freezing is one way to solve it.

But does freezing the milk make it less good or harm it in any way?

Could it still be vastly better than store-bought conventional pasteurized milk coming from unhealthy feedlot cows? For some some comparison, go here to see the levels of decline in the beneficial properties of raw milk once it is frozen. 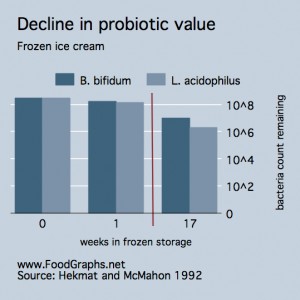 “I like to keep a supply of organic whole raw milk in my freezer. I label wide-mouth glass containers like my grandma used for freezing with the words “Whole Milk” and the date. After losing too many quarts of valuable organic milk to burst jars, I now leave plenty of headroom, cap tightly, and lay them on their sides to freeze as quickly as possible, and store them upright after they are frozen.

I was surprised to see good quality raw whole milk is yellow when frozen. I think this is because we now see the butter suspended clearly in frozen liquid.

Don’t be concerned if fast thawing results in slight separation of the butterfat from the milk. These are just luscious lumps of Vitamin A & D-rich cream that can be whisked back in — real delicious superfood. I mainly use defrosted organic raw milk to make smoothies, to make kefir (an ancient cultured milk beverage) and for cooking, but it is perfectly tasty by the glass, too.” (source)

Our method may be more time consuming. Our farmer only fills the gallon container to around 3/4 full and caps tightly. You will need extra clean empty gallon containers in which to freeze what you pour off. We like to have a fairly full freezer (colder) as it helps it freeze faster. My husband shakes them (this takes dedication) every half an hour to keep the cream from separating. When you thaw them the cream is evenly dispersed. *This spring we may do it in like the method above and scoop out the cream or stir it back in. That will avoid the shaking which can take 8 hours or more and one tired arm! Does this tell you how much we love what raw milk does for us?

I encourage you to find a local farm and see what they offer. Talk to other cow-share owners and check references.

Real milk can save family farms. If we want to protect our right to enjoy real and traditional foods, then we need to support the small family farms that are producing them.

For the true story of raw milk, I recommend The Untold Story of Milk by Ron Schmid, ND. It is an eye-opener.

In an excellent post on raw milk, Stephanie at Keeper of the Home, states, “Much of the negative talk that you’ve heard about milk, and raw milk in particular, is simply fraught with the tensions that exist in modern agriculture, between smaller, family-run and sustainable farms and large-scale corporate agriculture, with its focus on profit and marketability. So little of it is actually about consumer safety and health, but rather about protecting the massive ‘dairy industry cartel’ and its profits.”

Raw milk can be a gateway for small-farm prosperity with consumers purchasing meat, poultry, eggs, produce and other products once they set foot on the farm to obtain milk. Invest in the future of small, sustainable farms and in the future of your family’s health.

How to Find Local Sources of Raw Milk — scroll down and click on your state!

A Campaign for Real Milk 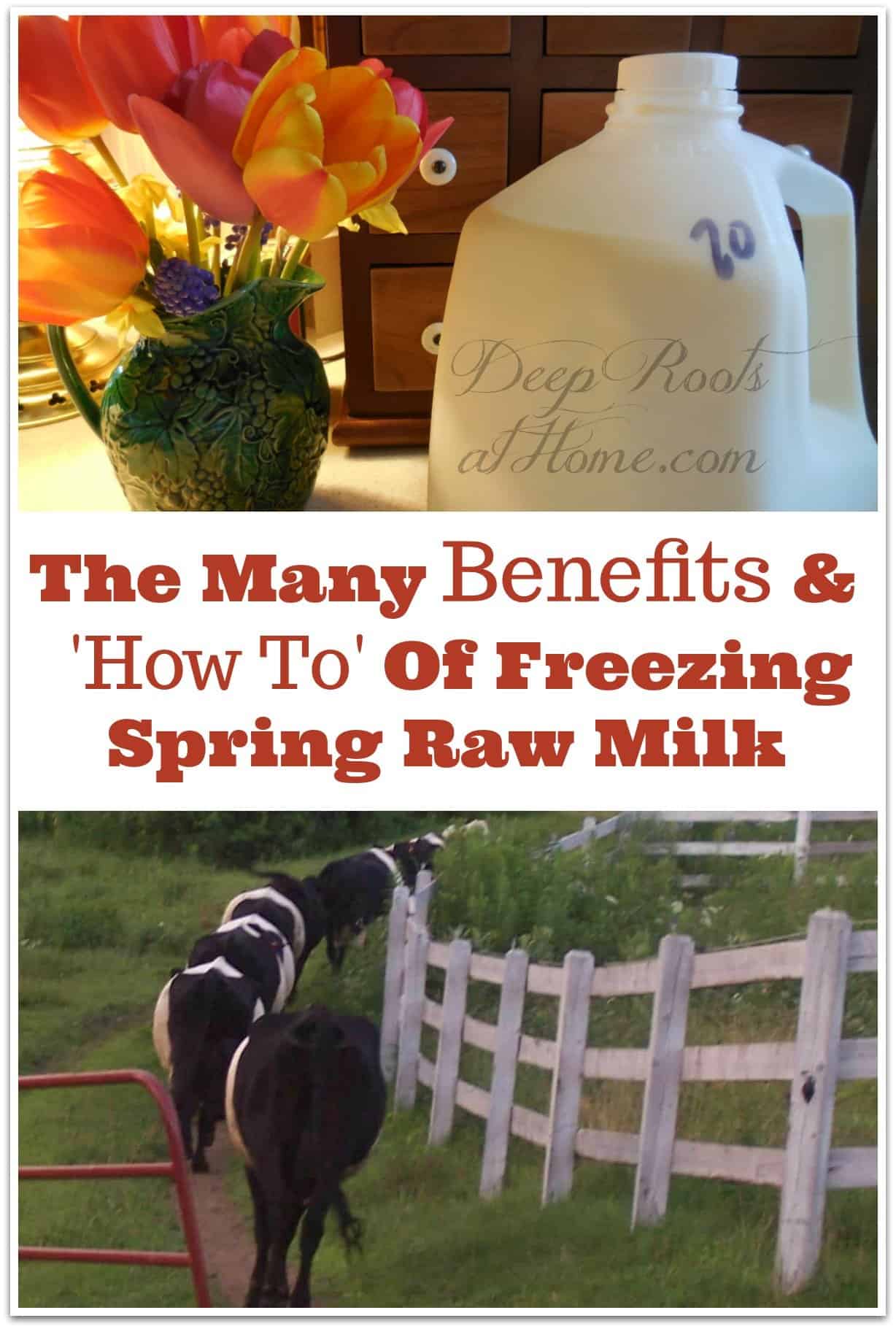