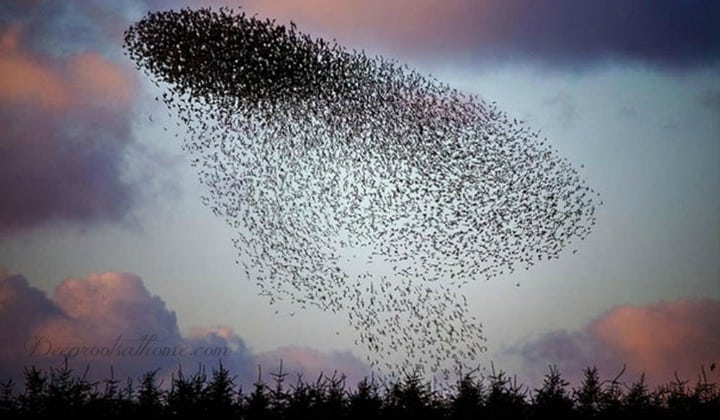 Look to the sky during autumn and winter and if you’re lucky, you’ll see one of nature’s most amazing sights: the starling murmuration.

A murmuration of starlings, as this phenomenon is known, must be one of the most magical, yet underrated, wildlife spectacles in winter. Winging at speeds of up to 30 miles per hour, an entire flock of birds can make hairpin turns in an instant.

According to this paper and this one, each starling follows the movement of the six birds flying closest beside it. And because they have lightning-fast reactions – under 100 milliseconds – and superb spatial awareness, if one bird changes speed or direction, those around it do too. This ripples through the murmuration and means that they’re able to fly at speeds of around 25 mph without crashing in mid-air.

Starlings were famously introduced to North America at New York City’s Central Park in the 1890s by Shakespeare enthusiasts who wanted all the bird species ever mentioned by Shakespeare to inhabit this continent. They are essentially an invasive species in this country.

With starlings, they certainly succeeded: 200 million of these birds now inhabit North America. They aren’t welcomed by everyone. As the Cornell Lab of Ornithology puts it, starlings in the U.S. are “sometimes resented for their abundance and aggressiveness.” In this Scientific American piece, they’re even called a “menace.”

The murmuration videos below invite us to see them with fresh eyes.

They Call it Black Sun

In the coastal wetlands of southwestern Denmark, where some starling flocks in spring can number more than a million, locals term their late-afternoon displays “black sun” because they literally darken the sky.

A murmuration can be seriously massive: a murmuration of more than six million starlings was recorded in 1999/2000 at Shapwick Heath National Nature Reserve in Somerset. Now that’s a lot of birds!

One writer says, “In murmuration, each bird strives to fly as close to its neighbors as possible, instantly copying any changes in speed or direction. As a result, tiny deviations by one bird are magnified and distorted by those surrounding it, creating rippling, swirling patterns.”

Some feel it is a maneuver to avoid a predator such as an attacking hawk.

Grainger Hunt writes on All About Birds:

“Look for starlings in the cooler months near dairies, feedlots, vineyards, or anywhere agricultural leftovers are present. When you find them in their multitudes — critical mass, so to speak — a Peregrine Falcon is probably close by, or perhaps a Merlin, Prairie Falcon, Cooper’s Hawk, or even a Red-tailed Hawk. All are capable of invoking the cloud response, though none so spectacularly as a peregrine. Get comfortable, lean back with your binoculars, and look for the predator near the darkest areas where individuals are packed the tightest. Look closely, just outside the margins of the cloud, and let nature reveal itself.”

Why Is It Called Murmuration?

And whoever thought of the word murmuration, anyway? It comes from the Middle English – ‘the act of murmuring:  the utterance of low continuous sounds or complaining noises.’

You can experience the sometimes low and sometimes deafening murmuring in the video. These images were taken at Gretna on the Scottish borders in 2011.

Murmuration from Islands & Rivers on Vimeo.

As you watch this chance encounter with one of the Creator’s greatest and most fleeting displays, may your mind be renewed and your heart filled with a desire to praise our awesome God today!

Head outside during autumn and winter and look to the skies just before dusk. Keep your eyes peeled for shifting shapes spinning through the air.

Now I keep my eyes ever heavenward in late fall and winter hoping to witness this very cool event. Maybe you will be inspired by one this winter, too!

“I love to think of nature as an unlimited broadcasting station, through which God speaks to us every hour, if we will only tune in. ” ~George Washington Carver 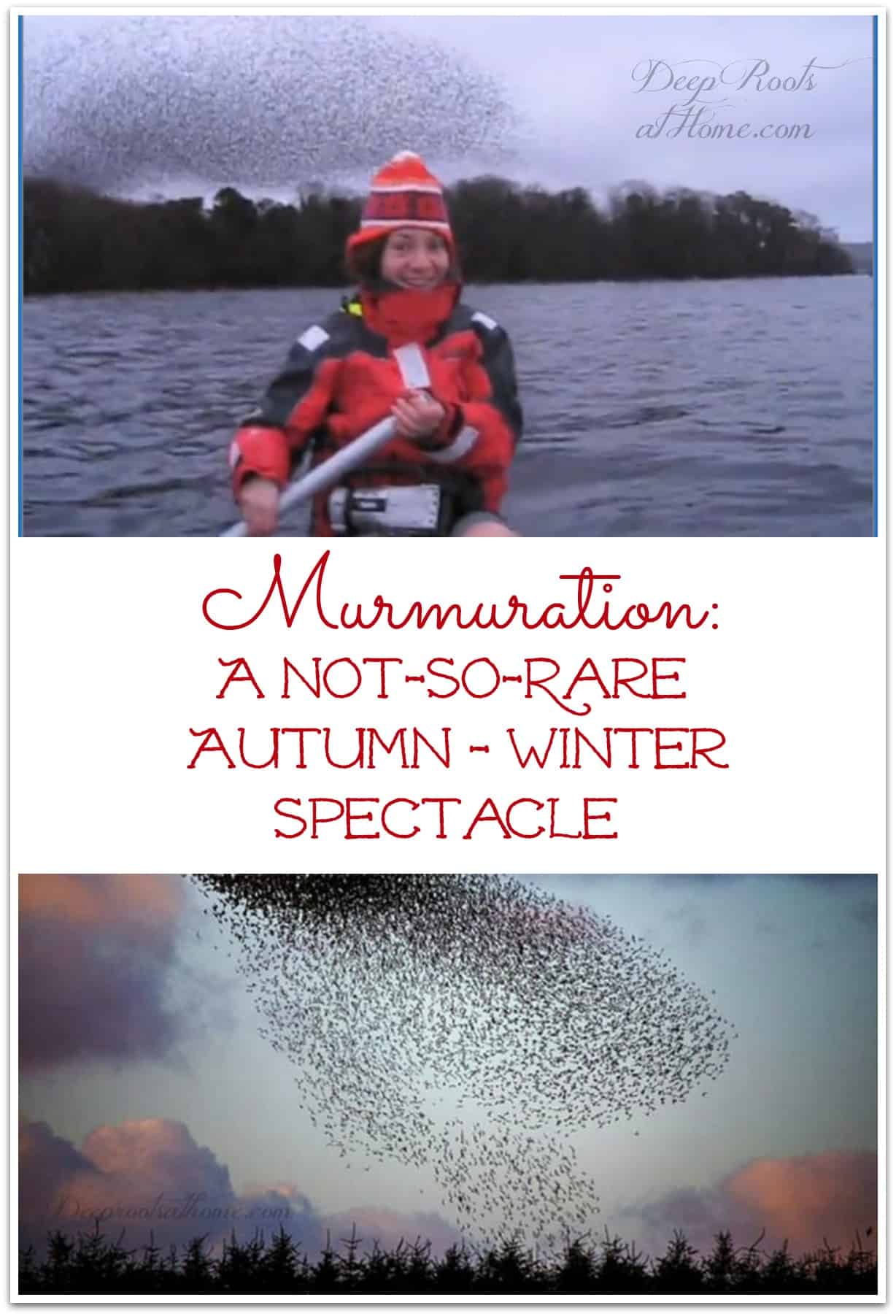