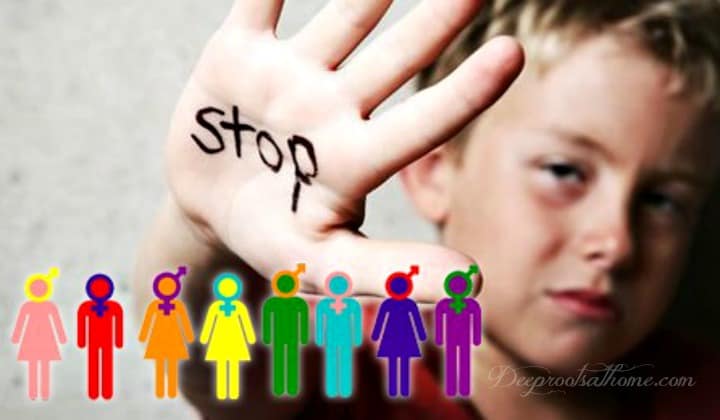 The American College of Pediatricians (ACP) recently released a powerful position statement stating that the move to indoctrinate children with the idea that they can pick their gender amounts to child abuse.

They are urging legislators and educators to reject all policies that would condition children to accept chemical and surgical distortions allowing people to impersonate the opposite sex.

Why do I include this post on gender indoctrination on a women’s healthy living blog? Because it is relevant to the health of our children, our homes and the next generations’.

This movement is now in full swing in government schools with LGBT activists demanding bathroom or locker room access. This raises serious privacy questions for girls who will have an anatomical male using their facilities.

Note: On Friday the 13th, May, 2016, the Obama administration issued an edict to all U.S. schools requiring they open bathrooms according to self-proclaimed gender identity instead of biological sex … or risk lawsuit and loss of federal funds.

The specific wording of the mandate, however, does much more than that. It also:

These policies aren’t just going into effect in California somewhere. All schools that receive Title IX federal funding will be required to enforce this mandate … or else.

Twenty years ago, it is doubtful that more than a small percentage of Americans even knew what the term “transgender” meant.

Today, gender-confused celebrities have their own reality TV shows. They appear on magazine covers, and they are part of a well-funded, vocal political movement. Cities across my home state and the nation are considering special rights laws for people who choose their gender and demand support, approval and accommodations based upon their behavioral choice.

I want readers to understand and be equipped to the dangers of this social-engineering movement.

Dr. Paul McHugh, the university distinguished service professor of psychiatry at the Johns Hopkins University School of Medicine, explains, “Transgendered men do not become women, nor do transgendered women become men. All (including Bruce Jenner) become feminized men or masculinized women, counterfeits or impersonators of the sex with which they ‘identify.’ In that lies their problematic future.”

Fight back, mothers and fathers, by teaching truth to your children incrementally (and appropriately) from a young age. Thankfully, there is still a sane and courageous body of pediatricians (though smaller) who is standing up to the strong pull of the current.

Some of the points outlined by Micah Clark in the report include the following:

Is there an agenda behind this insanity for profit, driving disfiguring surgeries and lifelong dependence on drugs, doctors, and psychologists?

The words at the end are very revealing.

Michelle A. Cretella, M.D.
President of the American College of Pediatricians

Read more on the details of the American College of Pediatricians findings here.

“Things happen which would not happen without prayer. Let us not forget that.”  ~Elisabeth Elliot