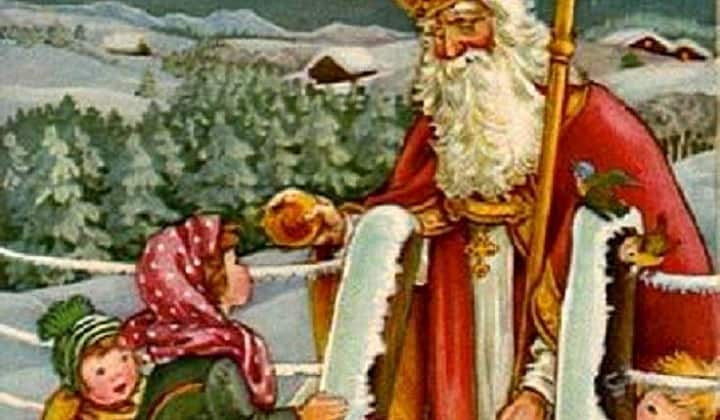 You’d hardly expect to find old St. Nicholas in a prison. But St. Nicholas is more than a children’s Christmas legend. Indeed, he was real flesh and blood, a persecuted prisoner for Christ, the bishop of the Mediterranean city of Myra.

Who Was the Real St. Nicholas?

Ancient biographers tell us he was born to wealthy parents in the city of Patara, Lycia in Asia Minor (now Turkey) about 270 A.D. He was still young when his parents died and left him a fortune.

Nicholas was perhaps in his 20s when the story occurs that made him a legend. He had heard about a family destitute and starving. The father had no money for food, much less the dowry needed to marry off his three daughters. He was just about ready to send his oldest girl into the streets to earn a living as a prostitute. 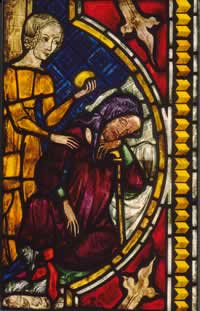 The poor maiden who has been given a golden ball from young Nicholas for her dowry, wakes her sleeping father. Stained glass early 14th Century, Church of Königsfelden, Switzerland

Under the cover of night, Nicholas threw a bag of gold coins through the window of their humble dwelling. In the morning the father discovered the gold. How he rejoiced: his family was saved, his daughter’s honor preserved, and a dowry for her marriage secured. Some time after, Nicholas secretly provided a dowry for the second daughter. Still later for the third.

But on the third occasion, the girls’ father stood watching. As soon as the bag of gold thudded on the floor, he chased after the lad till he caught him. Nicholas was mortified to be discovered in this act of charity. He made the father promise not to tell anyone who had helped his family.

Soon after, Nicholas turned his back on his wealth to answer a call to the ministry. (source)

At the nearby city of Myra a bishop supervised all the churches of the region. When the bishop died, the bishops and ministers from other cities and villages — Nicholas among them — gathered to choose a successor.

Nicholas was in the habit of rising very early and going to the church to pray. This morning an aged minister awaited him in the sanctuary. “Who are you, my son?” he asked.

“Nicholas the sinner,” the young minister replied. “And I am your servant.”

“Come with me,” the old priest directed. Nicholas followed him to a room where the bishops had assembled. The elderly minister addressed the gathering. “I had a vision that the first one to enter the church in the morning should be the new bishop of Myra. Here is that man: Nicholas.”

Indeed they did choose him as bishop. He was destined to lead his congregation through one of the worst tribulations in history at that time.

“A vast multitude was imprisoned in every place,” wrote an eyewitness. “The prisons which had been prepared for murderers and robbers, were filled with bishops, priests, and deacons so there was no longer room for those condemned of crimes.”[1]

In A.D. 303, the Roman Emperor Diocletian ordered a savage persecution of all Christians. Those suspected of following the Lord were ordered to sacrifice to pagan gods. Nicholas and thousands of others refused.

Brutal tortures were unleashed on Christians all over the empire. Lay people, ministers, bishops, and bishops were dragged to prison. Some were forced to fight gladiators for their lives while bloodthirsty crowds screamed for their death. Women suffered dehumanizing torment. Believers were fed to wild animals. Saints were set aflame still alive, while others were beaten senseless.

Blood Of the Martyrs

The vicious persecution of the faithful believers couldn’t stamp out Christianity. Rather it spread wildly. Third Century leader Tertullian observed, “The blood of the martyrs is the seed of the Church.”

Those who survived Diocletian’s torture chambers were called “saints” or “confessors” by the people, because they didn’t forsake their confession that Jesus Christ is Lord. Nicholas was one of these.

Finally, after years of imprisonment, freed by decree of the new Emperor Constantine, the iron gates of the prison swung open and he walked out. As he entered his city once more, his people flocked about him. “Confessor! Nicholas!” they shouted. “Saint Nicholas has come home.”

The bishop was persecuted, but he was not broken. He served Christ’s people in Myra for another thirty years. Through the prayers of this tried and tested soldier of faith, many found salvation and healing. Nicholas participated in the famous Council of Nicea in 325 A.D. He died on December 6, about 343, a living legend, beloved by his whole city.

A fascinating article in National Geographic agrees: Archaeological investigation of his bodily remains show that he suffered beatings and had a badly broken nose under the Emperor Diocletian. (source)

The St. Nick we think of at Christmas still carries reminders reminiscent of this ancient man of God. His red suit recollects the red of bishops’ robes. Gifts secretly brought on Christmas eve bring to mind his humble generosity to the three daughters.

Surely, if he were alive today, this saintly Christian would humbly deflect attention from himself. No reindeer or sleigh, no fur-trimmed coat or hat or North Pole elves working overtime. As he did in life centuries ago, Bishop Nicholas would point people to his Lord and Master.

“I am Nicholas, a sinner,” the old saint would say. “Nicholas, servant of Christ Jesus.”

Oh, may each of our lives reflect the beauty, generosity, and grace of Christ Jesus just as the man Nicholas did, giving God all the glory!

“Therefore, since we are surrounded by such a great cloud of witnesses (saints), let us throw off everything that hinders and the sin that so easily entangles. And let us run with perseverance the race marked out for us…” ~Hebrews 12:1 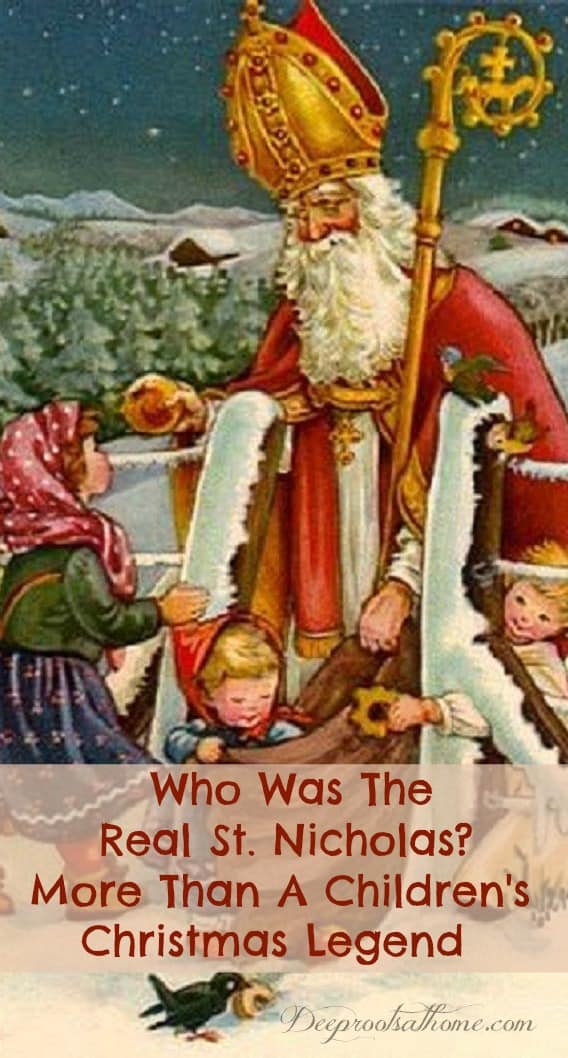