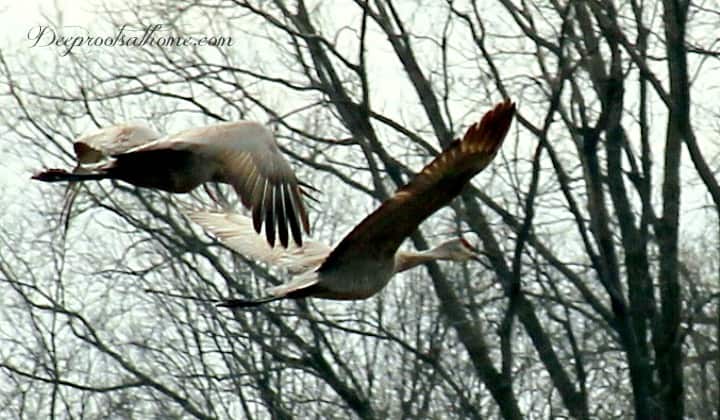 One of the best things about our home is the view out over the hay fields and wetlands, and today we had a special treat. A mated pair of Sandhill cranes were browsing in the meadow, feeding side by side.

We hear their distinctive trilling call and run to find them in the sky! Hear their call here.

The Sandhill Crane (Grus or Antigone canadensis) is the most numerous species of crane in the world, and until just recently was becoming endangered. They have made a comeback in recent years.

Within the last few decades, Sandhill Cranes have greatly expanded their nesting range and numbers in the upper Midwest, a population that migrates southeastward toward Florida for the winter.

And our farm is right in that flyway. 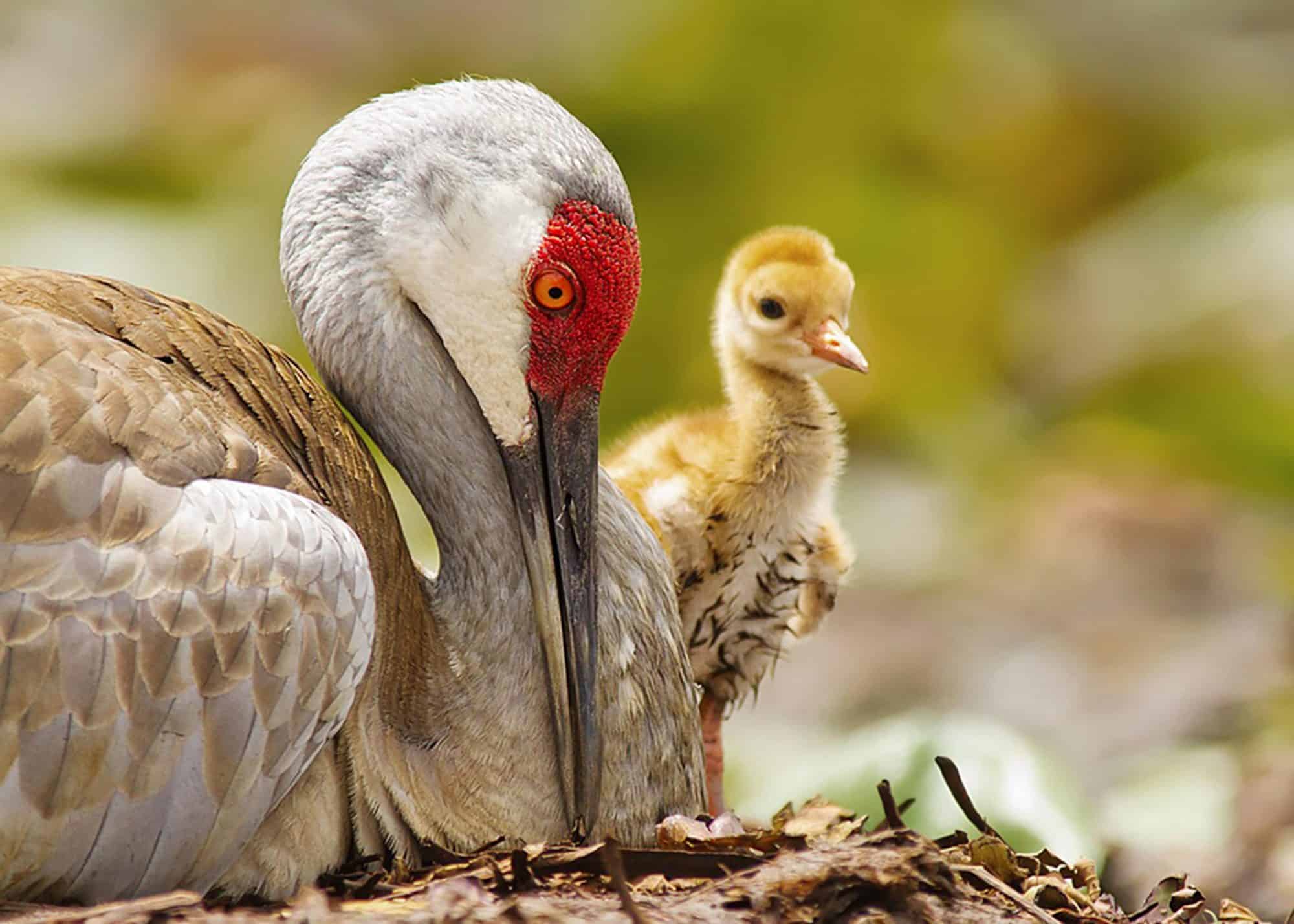 Their Behavior and Habitat

Sandhills breed and forage in open prairies, grasslands, and wetlands. Outside of the breeding season, they often roost in deeper water of ponds or lakes, where they are safe from predators.

Sandhill Cranes forage for grains and invertebrates (grubs, worms and snails, etc. without a backbone). 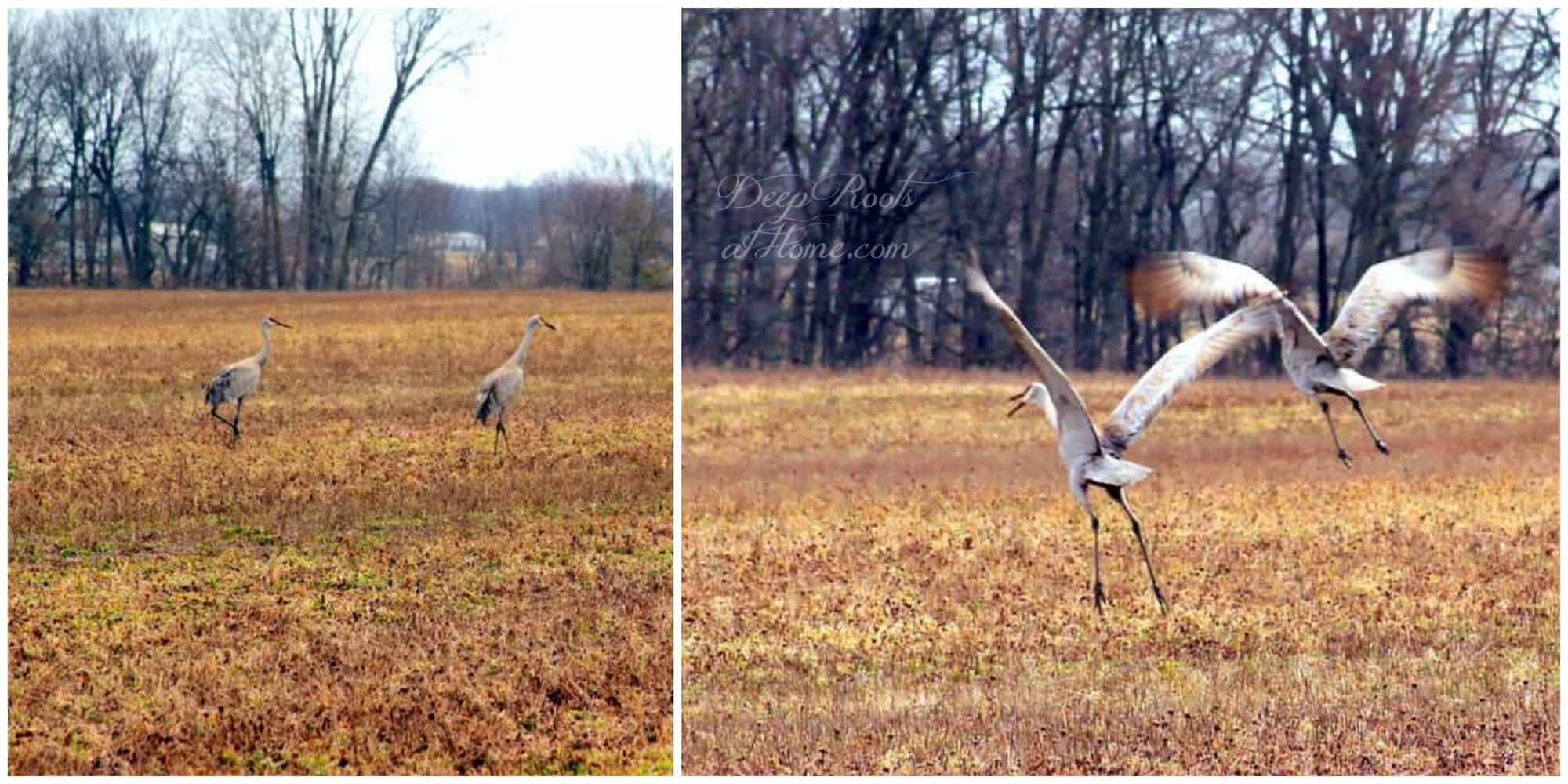 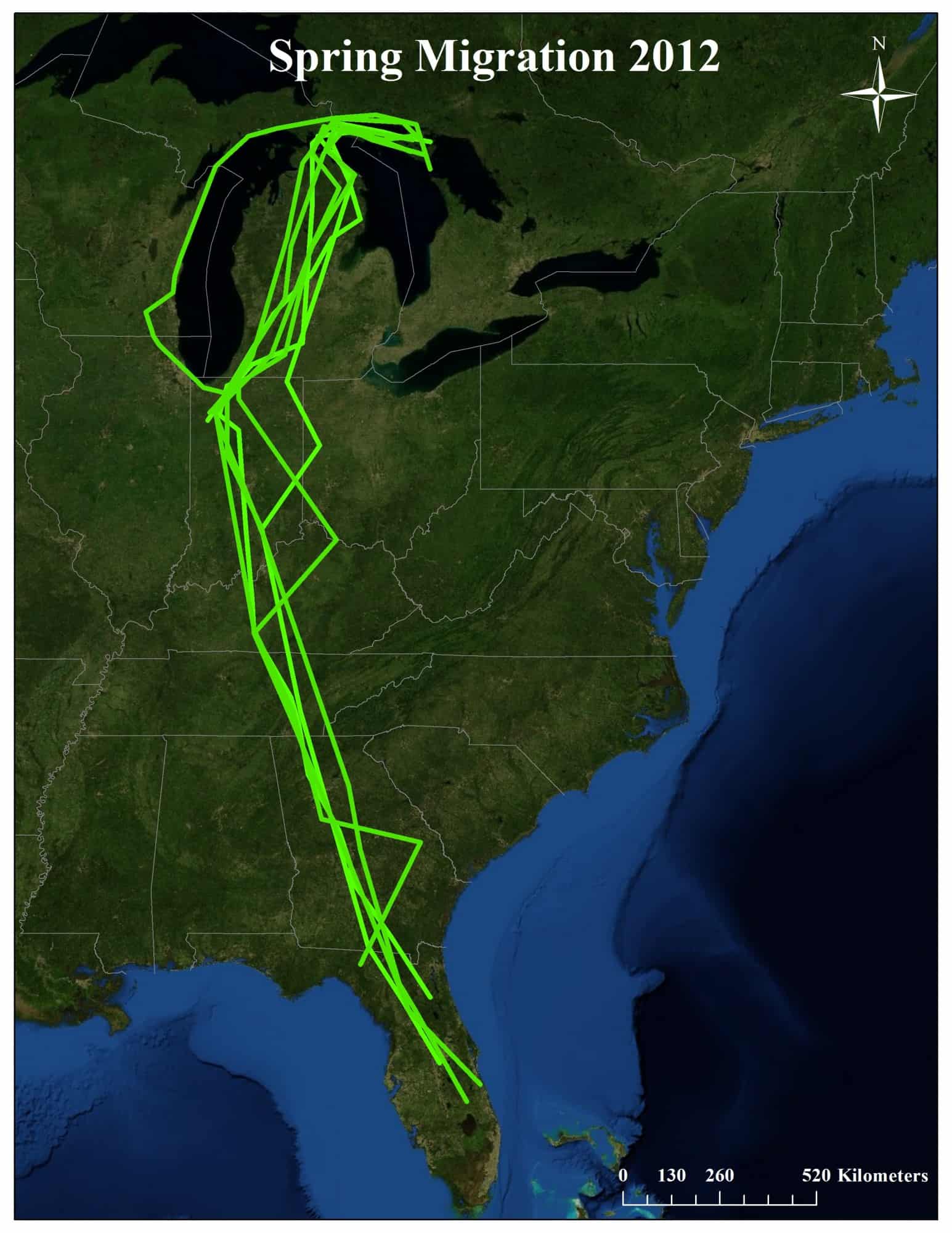 With the birds being maybe 1000′ away, my son grabbed his camera and took off outside.

We grabbed the handy Audubon reference to make sure our guess of Sandhill crane was correct, and it was.

Our binoculars showed a red forehead above the beak, a white cheek, and magnificent height.

Their bedraggled appearance verified they were in migration. Some pass through each year from as far away as Cuba heading to breeding grounds as far north as Siberia and Alaska.

There are six migratory populations of Sandhill Crane.

We claim the Eastern Population (EP) which traditionally breeds primarily throughout the Great Lakes region and winters in Florida and parts of southern Georgia. During both spring and autumn migration, EP cranes stage throughout the east-central United States including Illinois, Indiana, Ohio, Kentucky, Tennessee, and Alabama, and, to the north, along the north shore of Lake Huron, Ontario, including Manitoulin and St. Joseph Islands.

The Eastern Population has been expanding in population size and breeding range since 2010. (source)

Our son spent a long while watching them feed from far enough off that he wouldn’t scare them (camera in hand), but soon they decided to go visit the wetlands near the neighbor’s lake and we watched them settle back down for another leisurely meal. 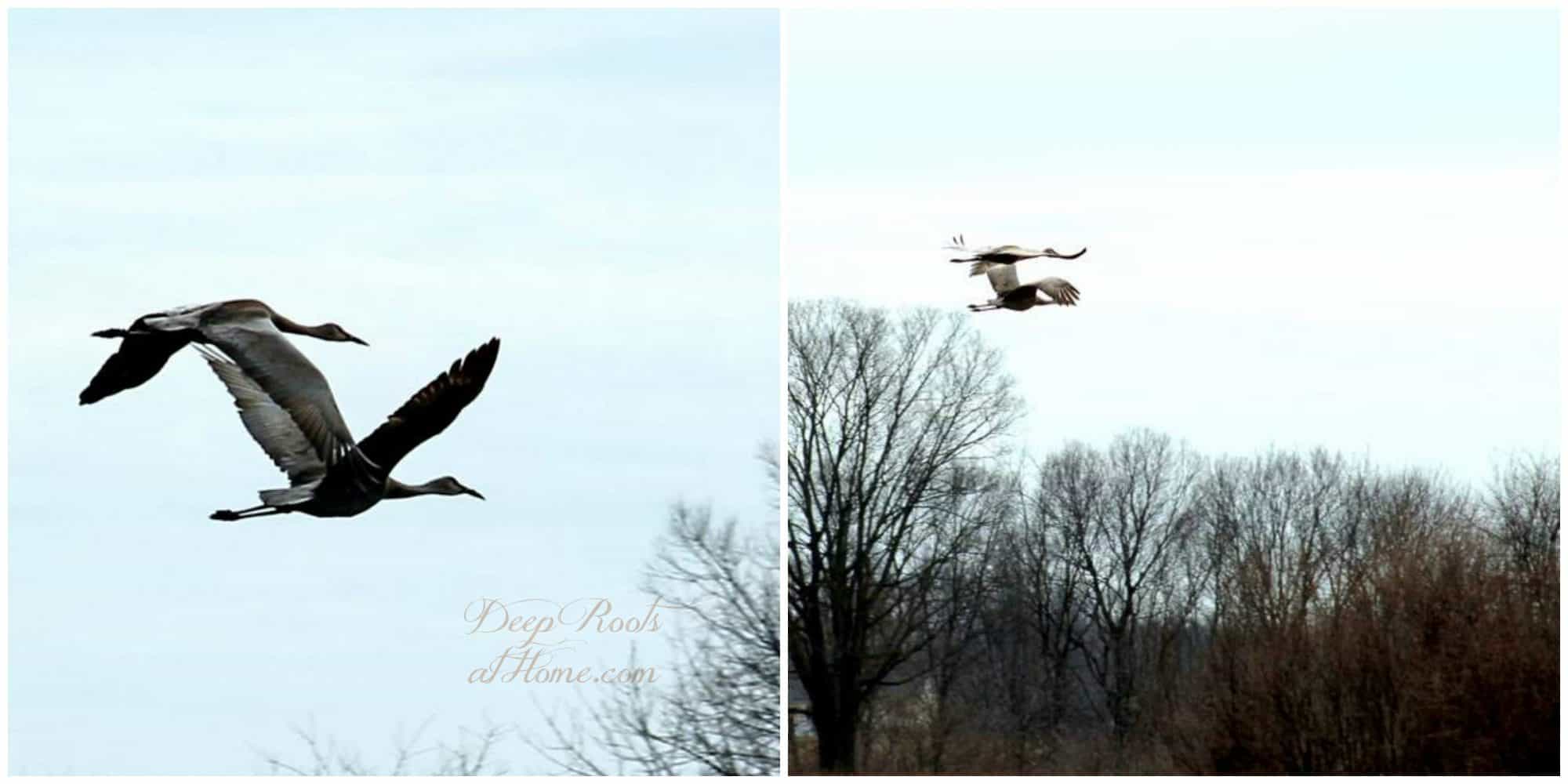 It may seem silly to some to get so excited about birds.

They, along with the great blue heron, have been making a strong comeback in our area in the last few years, and we have been cheering them on.

It is wonderful to see the resilience our Lord has placed in His Creation. He won’t allow the earth to be destroyed (despite the fall and the sin nature of man) until it is His time to do so. (Rev. 1:7)

Sandhill cranes migrate by following known paths taught them by their parents or substitutes. The couples mate for life. Migrating birds know when and where to go and when to return. When God created them, He put that information in them.

Update: (3/8/19) Once again, 4 years in a row, we’ve had more Sandhill couples feeding way back behind the house, and I wouldn’t be surprised that at least one of those pairs remembered our friendly field. We, too, can know the seasons by their return, and it doesn’t grow old to watch these majestic birds.

“Yea, the stork in the heaven knows her appointed times; and the turtle and the crane and the swallow observe the time of their coming; but my people know not the judgment of the LORD.”  ~Jeremiah 8:7, KJV 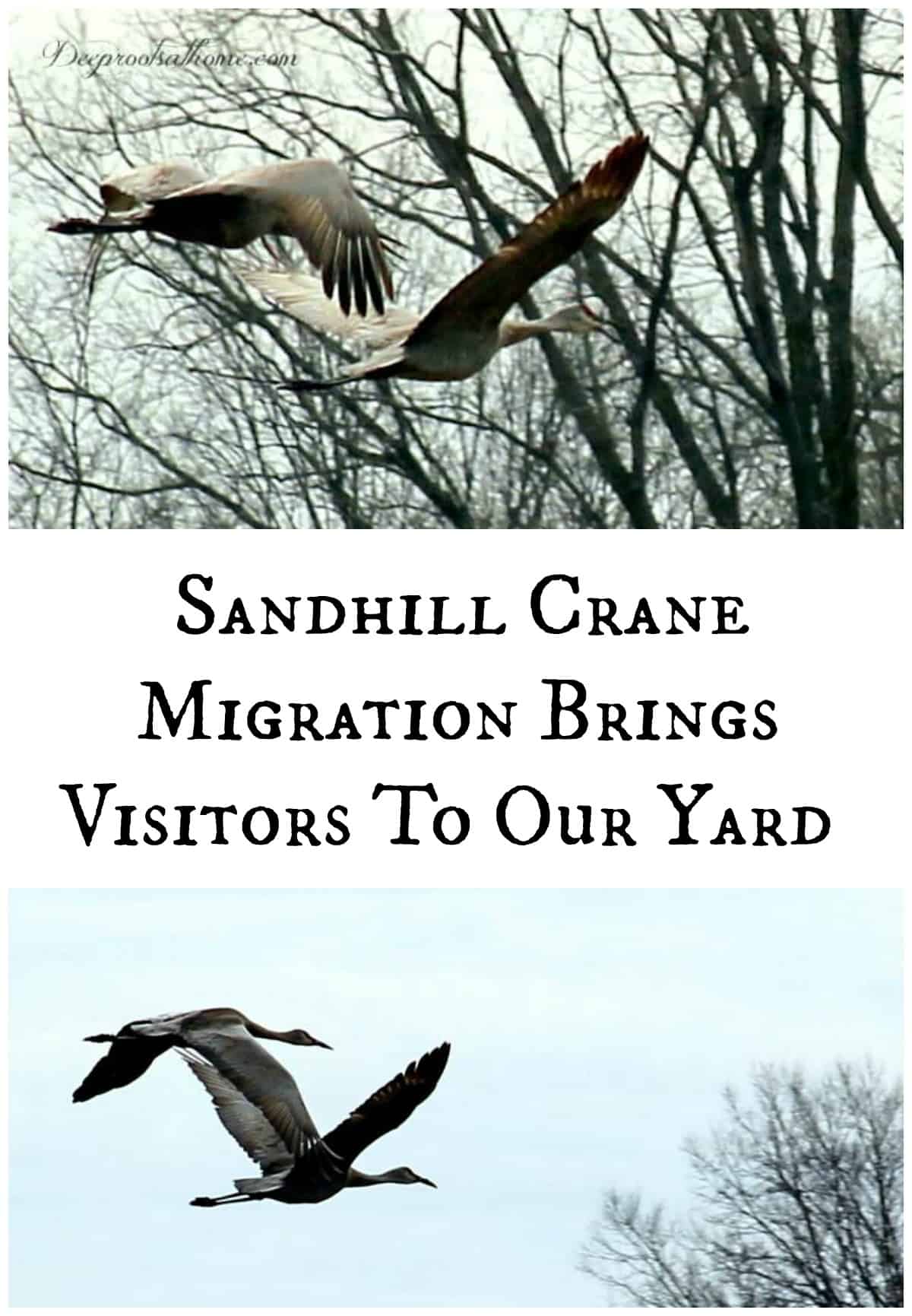