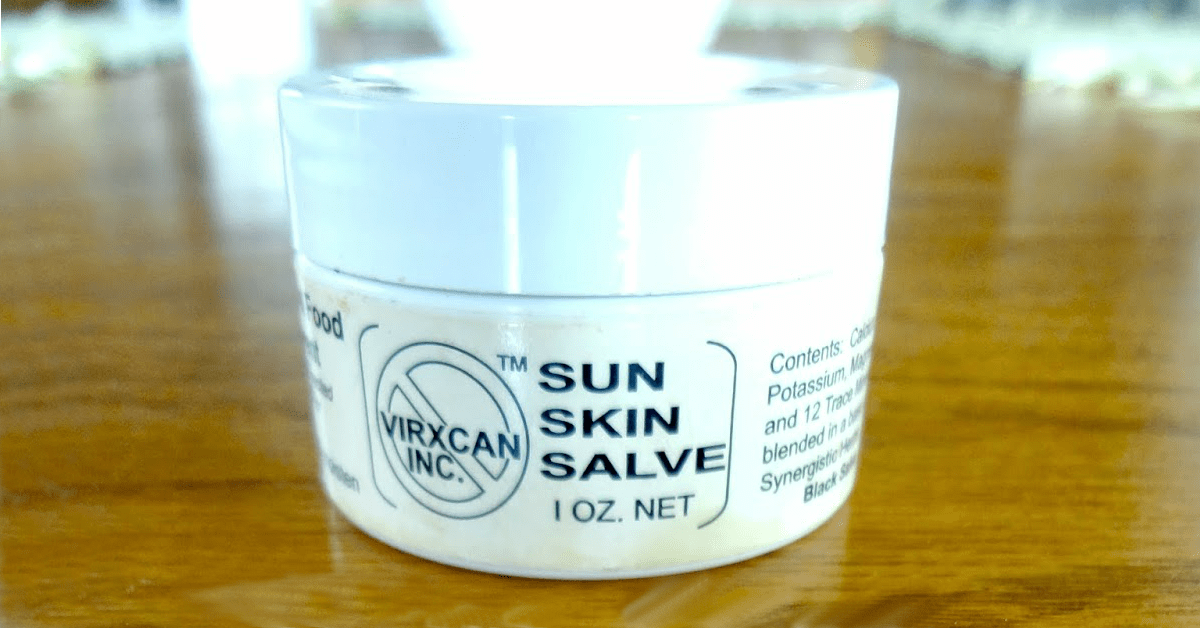 [I have permission to bring Lori’s experience to you here on the blog because we both feel strongly about sharing knowledge with readers and letting you make up your own mind. Our family has also used it with good success! This is anecdotal only.] By Lori Alexander

Our Experience With Black Salve

This is my opinion only!

I take no responsibility for the results you experience with Black Salve, but my family has had wonderful experiences with it. I bought it many years ago and I forgot who told me about it but it has gotten rid of our moles, warts, pre-skin cancer, and skin cancer (basal cell and squamous cell).

It truly is amazing. Not one thing that I have treated has EVER grown back!

If you have something growing on your skin, you put a big blob of it on a little round band aid and put it on your sore, mole, or wart. Wait twenty four hours, then take the band aid off.  Sometimes it stings a lot. This definitely means it is something that needs to go.

If nothing happens, it means that there was nothing that needed to go. 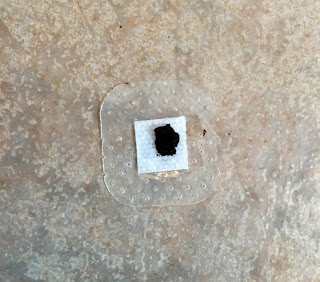 I had a sore on my chest that was getting redder and wouldn’t heal. I put some Black Salve on it and it immediately started stinging. It stung the whole 24 hours and when I took the band-aid off the sore was white, swollen, and full of puss.

The thing that is great about Black Salve is it only goes after the cancer, wart, or mole. The skin around it gets a little red but that is all.

When you take the band aid off, clean the sore with hydrogen peroxide, put a dab of Vaseline or coconut oil on it (I bought my Vaseline at the health food store so there wouldn’t be any petrochemicals in it), and put another small round band aid on it.

Do this (apply vaseline or coconut oil) every day until it is healed.

[Clarification from Lori: You apply the Black Salve only once for 24 hours. Then after this, you change the band-aid (applying Vaseline or coconut oil to the sore) daily until the root falls out and it completely heals which can take up to three weeks if it’s big like the one of my arm was.]

This is the key to having the smallest scar possible.  Sometimes it leaves a little scar, but if you went to a doctor, they would probably leave a bigger scar (if it had to have it cut out).

You can get a fever using it. We’ve never gotten one, but I heard it is possible as your body fights the injury.

Usually after several days, the root will eventually fall out and leave a hole in your skin, but it will heal. Sometimes if the wart or mole is a little stubborn, I will keep it on for 48 hours. I would suggest doing no more than one area at a time so you don’t overwhelm your body.

I love finding things like this that I can take care of instead of going to the doctor. We have had amazing success with this and will keep on using it since it works so great!  We have had our small jar for many years and all of my family uses it.

Recently, I had this sore right near my elbow that wouldn’t heal. I put some Black Salve (see link below to read more) on it and immediately it began to burn. It burned the whole 24 hours and became red and swollen. Even when I took the Salve off and put vaseline and a band aid over it, it burned for about a week afterwards.

It was by far the biggest spot I have ever used this on. Puss and even a little blood oozed out from under the band aid.

The Root Uprooted with Black Salve

The big white thing is now the root. It should come out in a few days. 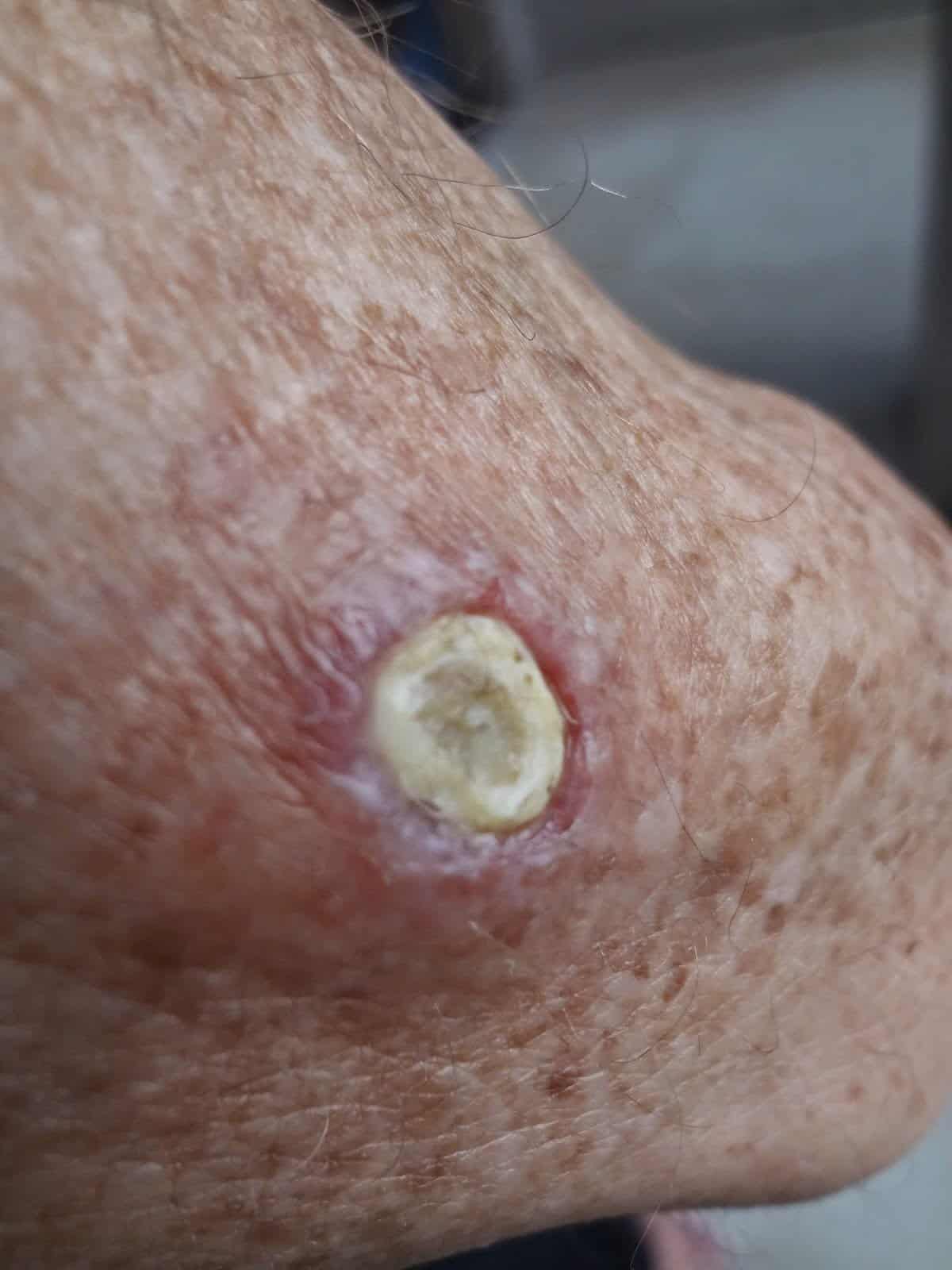 (Yes, the good Lord didn’t bless me with good skin. I freckle and wrinkle very easily, and I am 56 years old with way too many years in the sun!) 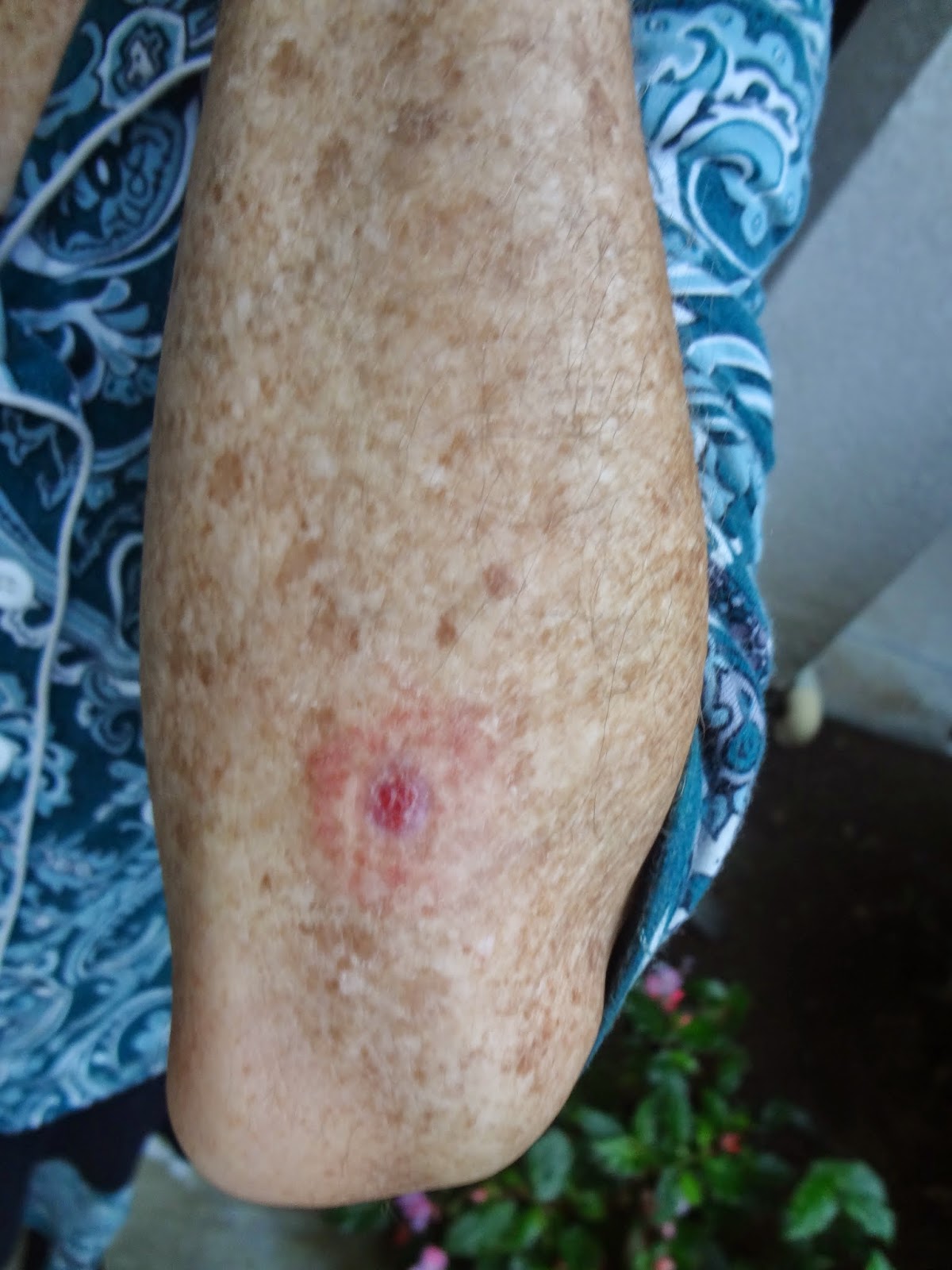 Here it is several weeks later. This was by far the worse treatment so far. It was much bigger and deeper than I thought it would be. It was very swollen and painful for at least a week and then it again “leaked” clear fluid and blood.

I finally put on Manuka Honey on it yesterday to help it heal up faster, and it did the trick! It will take a few more weeks for it to completely heal, but it’s getting there. 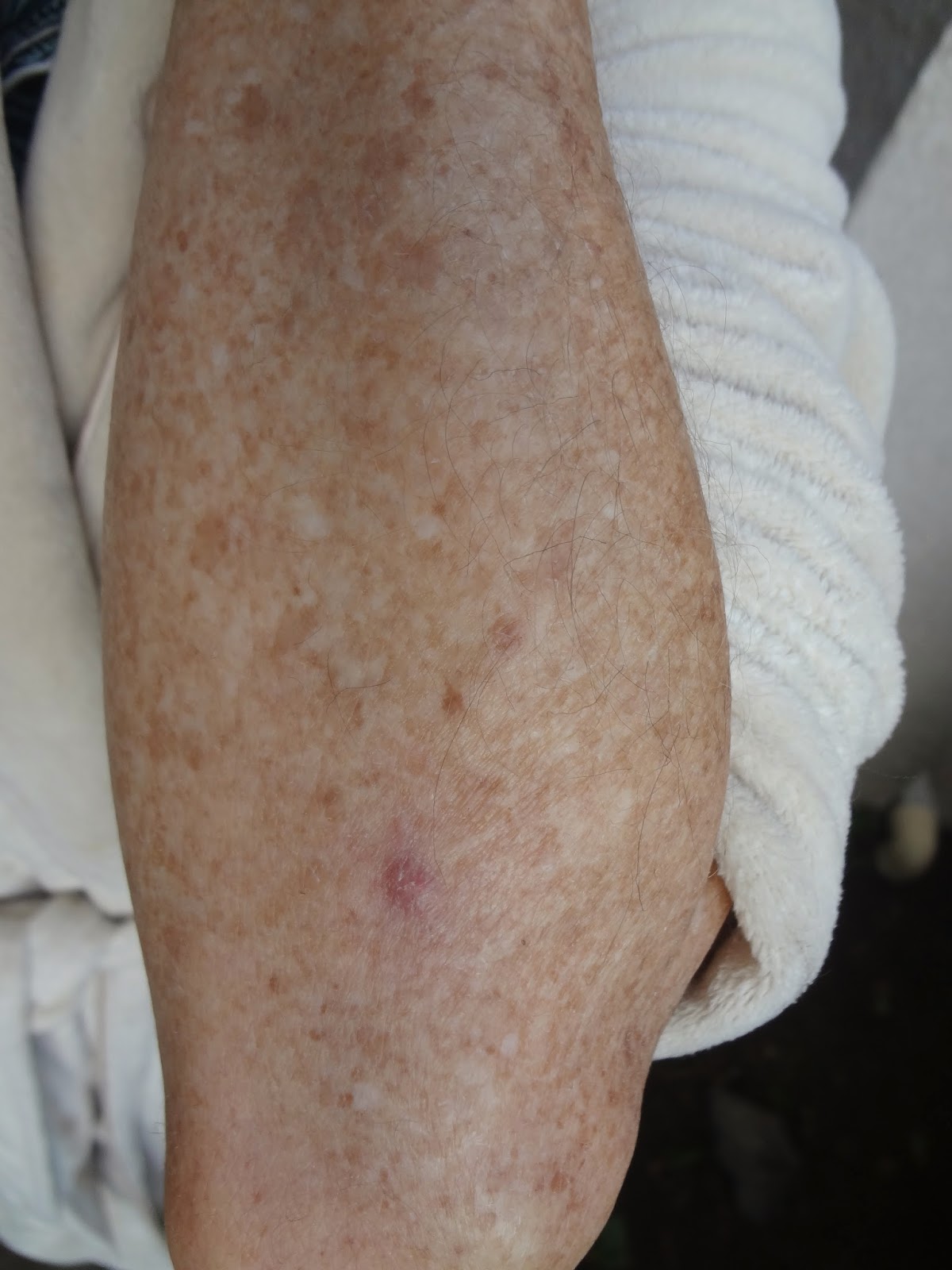 Above is a picture about two months after applying the Black Salve (see link below to read more). It is a flat red spot that will probably completely disappear in a few more months.

I LOVE this stuff!

***UPDATE: It’s been six months and I can barely see it!

5/13/2018: Here’s one that I treated with Black Salve a few days ago on my neck. I will show you it in a few months to show how little scar it leaves! 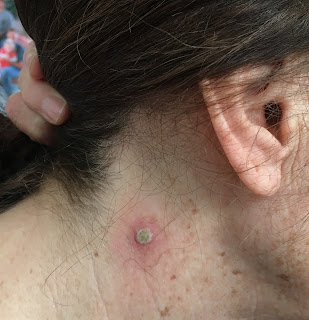 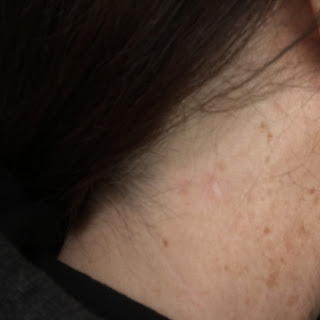 I link to Virxcan Black Salve only so you can see it on Amazon here and read the reviews.  It is an ‘Amazon’s Choice’ product. Mind you, I am not recommending that you use it – just showing what we use. We’ve had our one jar for many years and we have shared it with others. We only need/use a tiny bit each time.

Right now it is unavailable on Amazon, so I’ve changed all the links are to where it is available!

Also, there appears to be a knock-off product: DO NOT USE IT, even though it is on Amazon. It is called “Virxcan-X Salve” by Sunstone Formulas. Sunstone is NOT the same. Read the reviews!!

Through the middle of the street of the city; also, on either side of the river, the tree of life with its twelve kinds of fruit, yielding its fruit each month. The leaves of the tree were for the healing of the nations.
~Revelation 22:2 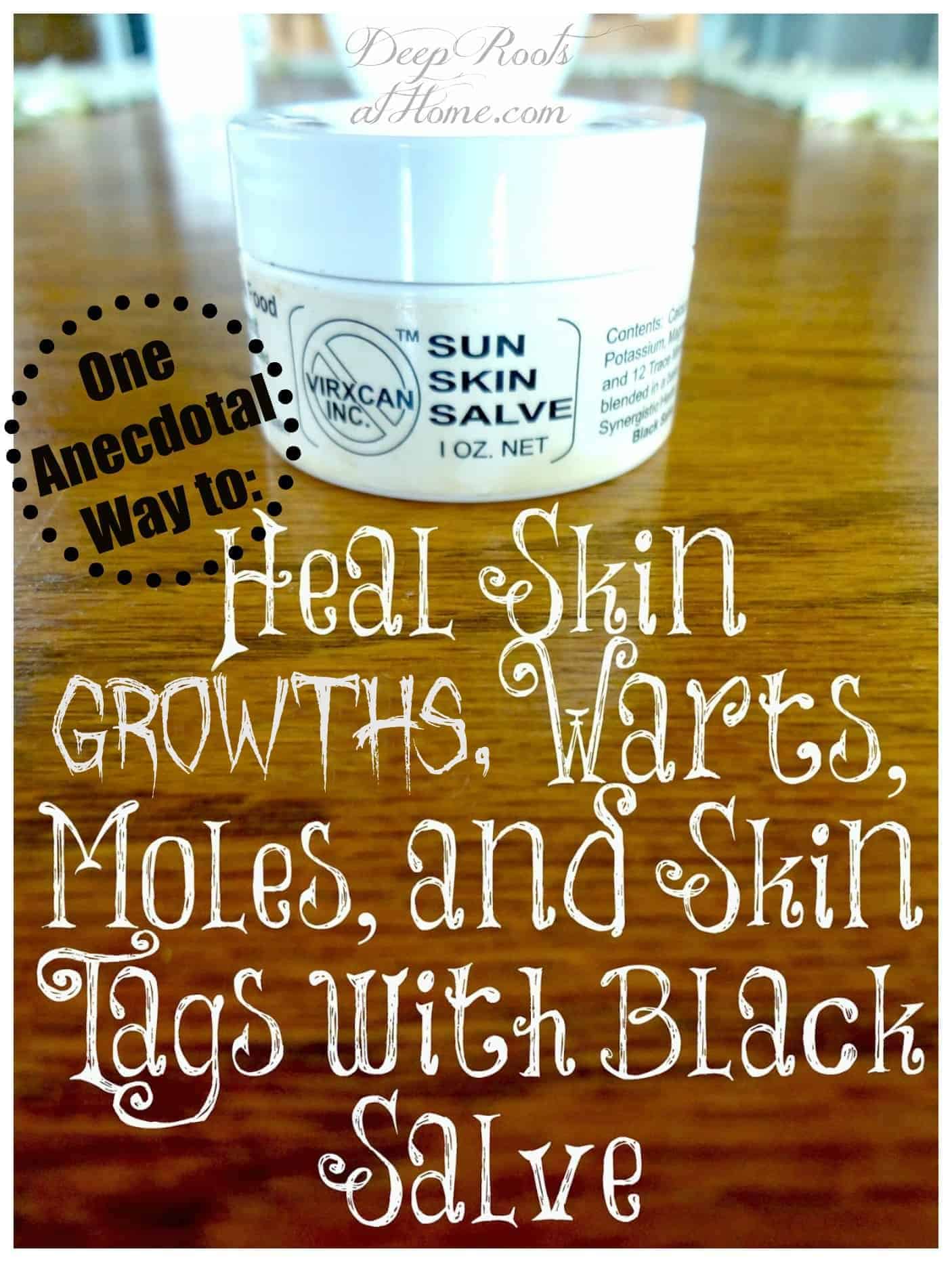