I value you each one.

I had no idea how much the Lord would place all of YOU, people I have never met, on my heart in these last two years – but He has! I pray for you and your families so often.

There are words I wish I had the ability to write, but Casper ten Boom (Corrie ten Boom‘s father) says them far better than I ever could, with the illustration about Queen Victoria.

May his words inspire you… 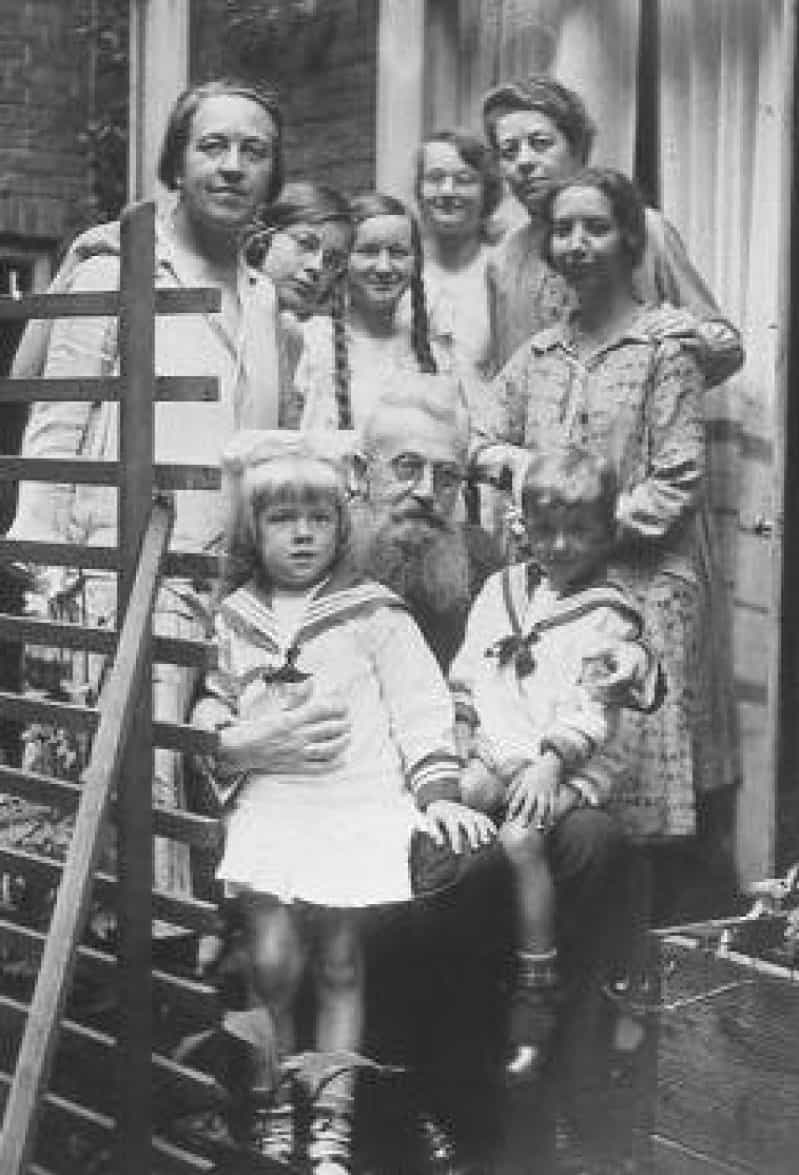 Father Casper, Corrie (L) and either Nollie or Betsy (top R) with students.

If the inhabitants of Bethlehem had known who Joseph and Mary were, and who the little child was who would be born of her — how gladly would they have prepared a little place for Him! But as it was then, it often is today. Many leave the Saviour, who is knocking, standing at the door of their heart, without paying attention to Him. For they have no place for Jesus. Many are too busy with themselves, and do not believe that He is the Son of the living God.

You who are getting on in age — let me ask you, how is it with you? Unto you also is born this day a Saviour, which is Christ the Lord. He came — not in majesty as the King of kings and the Lord of lords — but taking Himself the form of a servant.

He came, in order that joy would be brought to all the nations, and they would be reconciled with God. He brought it also in your soul — the peace which the world cannot give. He is the One who would save His people from their sins.

Do you wish to be delivered from your guilt, and be set free from the evil which binds you with chains as a slave?

He calls to you:

Only those who have gotten to know Him as the One who delivered them out of the hands of their enemies, in order to serve Him without fear, in holiness, and justice all the days of their lives — only those who can thank Him for this — are truly free.

For you know: If our Lord were born a thousand times in Bethlehem and not in you, you would be lost anyhow. Oh, for your life’s sake, accept His offer — do not send Him away with the answer:

No place for You!

For then you run the risk that when you would wish one day to be allowed to enter the heavenly Jerusalem, the city of the great King, you would be told:

No place for you here!

Then it would be too late for you to cry out, “Oh, if only I had known that!”

It is told that Victoria, the Queen of England, when staying at her summer residence Balmoral, liked to take long walks through the woods in simple clothes, and had pleasure in remaining unknown. Some years ago, she was caught in a heavy rainstorm while on one of these trips.

Noticing an old cottage, she ran towards it for refuge. In this cottage lived an old peasant woman alone, who left her house only to take care of her goat and tend her small garden.

The Queen greeted her and kindly asked if she could borrow an umbrella. She added that she would take care to have it returned soon to its owner. The old woman had never seen the Queen, and so she had no idea who she could be.

Therefore she answered in a grudging tone, “Well, I have two umbrellas. One is very good and almost new. I have used it very little. The other one is very worn and has had its time. You may take the old one; the new one I don’t lend to anybody — for who knows whether I would ever get it back?” With these words, she gave the Queen an old umbrella, which was torn and battered with spokes sticking out on all sides.

The Queen thought, With this kind of weather, a bad umbrella is better than nothing at all, and accepted it politely. Thanking the woman, she left smiling.

But how great was the horror of the poor old woman, when the next morning, a servant in royal livery entered and returned to her the old umbrella in the name of Queen Victoria — with her thanks — and the assurance that Her Majesty had received good service from it! How sorry she was that she had not offered to the Queen the very best she had, and over and over she cried out, “If only I had known! Oh, if only I would have known!”

This will also be the cry of those who will realize too late who He is in the day when all eyes will see Him. Tonight the Saviour comes near to you — not in royal glory — but emptied of it, as a poor little child. And in this humble stature He wants to be received by you. If you have done this, you will one day behold the great King in His beauty.

Then you will also stand in awe and cry out, “I did not know how endlessly great and good You are. For what eye has not seen, nor ear heard, neither have entered into the heart of man, the things which God has prepared for them that love Him.”

Have you accepted Him, and can you say with the elderly Simeon about the child in the manger: “My eyes have seen Your salvation, O Lord!”? Then you will also gladly follow the example of the shepherds and widely proclaim the Word which is said concerning this little child. Then the Word of God will receive a place of honor in your family circle.

For if we ourselves have found the greatest treasure, we also want our children to share this privilege with us. Is it not true, parents — you who send your children to our Sunday school — you desire that they will come to know their Saviour at an early age? But you also admit that it takes more than just one hour of Sunday school in the week to attain that purpose.

If you seriously want your child to become a little sheep of the Good Shepherd, you must set an example in your own life. Does the peace of God live in your house and in your heart? Do your children see in you how they must follow the Lord and deny themselves?

A certain father had to inform his son, who was very ill, that he would die soon. The boy answered, “Well, then, I will be with Jesus maybe tonight, Father.”

“Yes, my boy,” replied the father, and quickly turned around to hide his tears. But the boy, noticing his father’s grief, said, “Father, don’t weep. When I arrive in heaven, I will immediately go to Jesus and say to Him that as long as I can remember, you have done your best to lead me to Jesus.”

Father or mother in our midst tonight: Would your child also be able to speak to you in this way? If not, there may still be an opportunity to repair much. Begin this evening by bowing your knees with and for your children. The Lord may be found by everyone who seeks Him. If you do this, your way will become like the one of the shepherds, of whom it is written that “they returned, glorifying and praising God.”

The Ten Boom family were devout and generous Christians. According to The Hiding Place, in 1918 the family took in the first of many foster children that they would shelter over the years. Corrie ran special church services for disabled children for 20 years. The Dutch Reformed Church “protested Nazi persecution of Jews as an injustice to fellow human beings and an affront to divine authority.” The Ten Boom family strongly believed that people were equal before God.

On 28 February, 1944, the Gestapo raided the Ten Boom home and arrested father ten Boom and his daughters, as well as his son Willem, and grandson Peter ten Boom, who were visiting. The Gestapo arrested other supporters who visited the house during the day, taking a total of about 30 people to Scheveningen prison.

When Ten Boom was interrogated in prison, the Gestapo told him they would release him because of his age so that he could “die in his own bed”. He replied: “If I go home today, tomorrow I will open my door to anyone who knocks for help”.  When asked if he knew he could die for helping Jews, he replied, “It would be an honor to give my life for God’s chosen people.” On 9 March, Casper ten Boom died at the Hague Municipal Hospital, at the age of 84, after nine days in Scheveningen prison.

His daughter Betsie died at Ravensbrück in December, 1944. His son Willem contracted spinal tuberculosis (TB) while imprisoned for his resistance work. Although he was released, he died of TB shortly after the war. Willem’s son Christiaan, then 24, was sent to the Bergen Belsen concentration camp for his work in the underground, and died there during the war. (source) 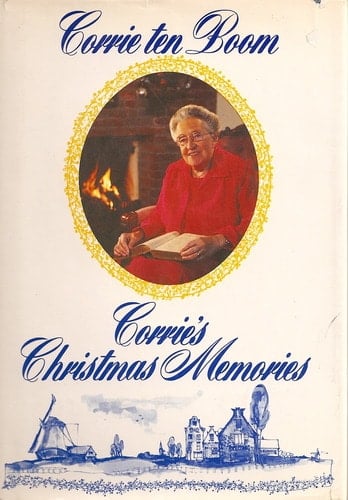 You can find a used hardback copy of Corrie’s Christmas Memories on Amazon for well under a dollar plus shipping! 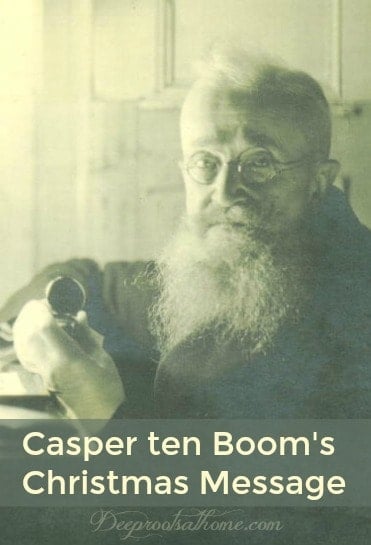