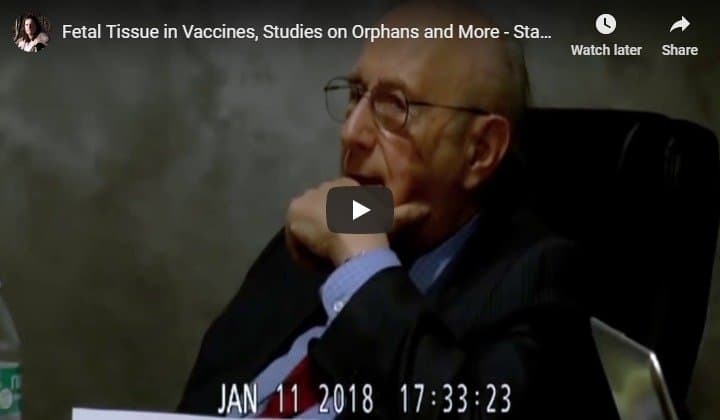 There are 2 videos in this post. In the first video, Dr. Stanley Plotkin gives heinous admissions that you might read in Orwell’s predictive book 1984. The second video below is the scientific exposé of human DNA fragments and the connection “with epidemic childhood leukemia and lymphomas.” Getting awareness to more individuals and families can’t happen soon enough.

It is clearly undisputed now that aborted fetal tissues and significant amounts of human DNA are in vaccines (and in products made with them). The video deposition under oath is proof.

Stanley Plotkin agrees/admits fetal cells were used in development of vaccines and are  VACCINES (at 3:00-4:00).

He also admits which parts of fetuses were cut up for use in vaccines!

Dr. Plotkin really struggles in this court deposition, especially near the end. So sad to see such a hardened heart.

Revealing Testimony by Dr. Plotkin During a Custody Battle

According to Patreon, “There is no “copyright” to deposition transcripts. It’s not someone’s intellectual property, like a book or an album. In this case, the transcript was not admitted into evidence, so the plaintiff could and did receive the transcript, and she gave it to others. Stanley Plotkin is the Godfather of the vaccine industry. Plotkin is a vaccine inventor, patent holder, spokesperson, consultant, and multi millionaire. He works for all four main vaccine manufacturers….” It was a custody battle between a non-vax mother and a pro-vax father. The brain trust at Voices for Vaccines, decided to put their highest scientific advisor – Dr. Stanley Plotkin – on the stand as a vaccine expert witness.

For many years, I’ve been researching the subtleties of how our bodies handle toxins and where those toxins come from, but trustworthy sources are getting harder to find! 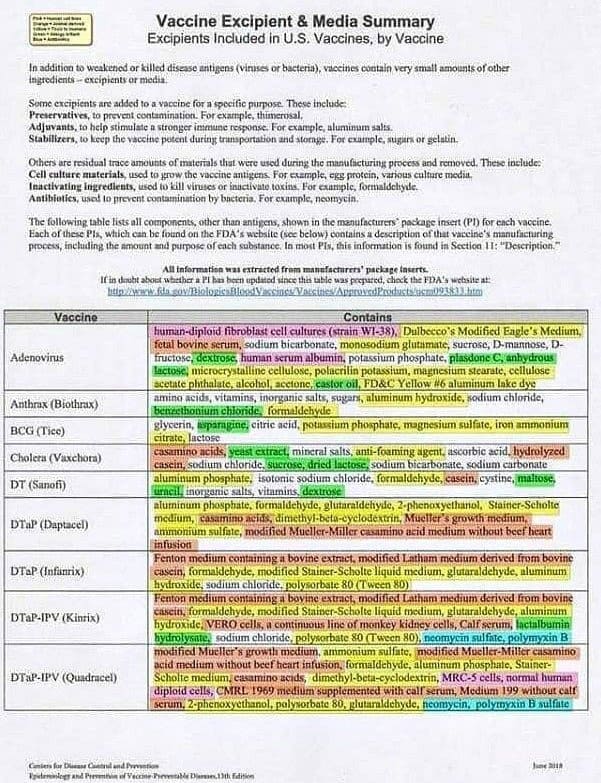 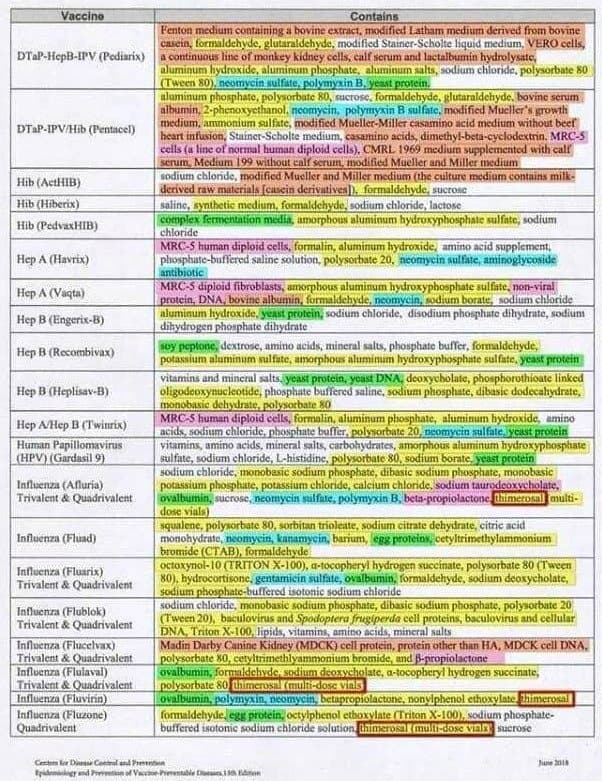 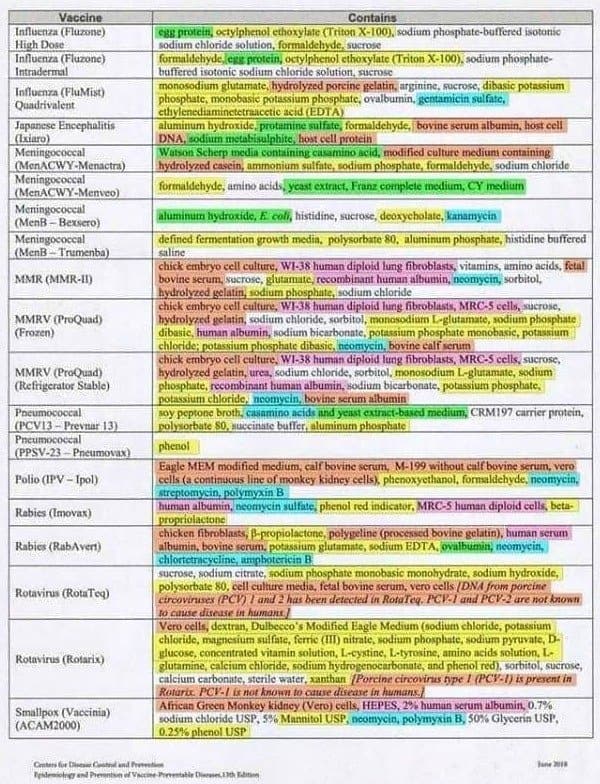 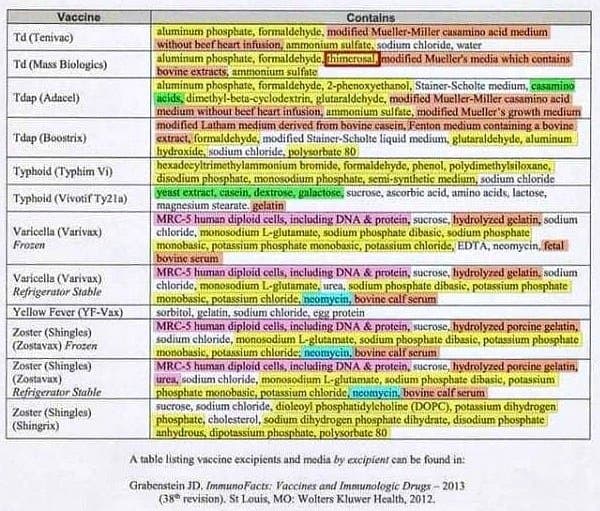 Note the words: “MRC-5 cells including DNA and protein“, aka “MRC-5 human diploid cells.” During sexual reproduction, gametes (sperm and egg cells) fuse at fertilization to form a diploid zygote – in this case a human BABY.

ALERT: You need to be downloading docs and pages before they disappear! The CDC has changed the “V Excipient and Media Summary” (above) to the “V Excipient Summary” this year, removing mention of some of the controversial components used during the production process (for example, compare this article’s MMR-II’s list of ingredients to the current V Excipient Summary’s, which removed the “WI-38 human diploid lung fibroblasts”). For complete lists of ingredients used in the v production process, we now need to go to the FDA’s website to view the “Package Inserts.” But they are not ingredient lists like we know them, so harder to wade through!! The pesky measles “outbreak” in NY led to its disappearance. The CDC is totally complicit in this vaccine scam.

“These vaccines… are grown in cultured human embryo fibroblast cell lines (WI-38 or MRC-5) because these are the only cells that replicate the viruses in high enough titer for mass production (the rubella vaccine strain itself was originally isolated from an aborted fetus with intrauterine infection).” (source)

Could Human Fetal DNA Fragments in Vaccines Be One of Causes of ASD?

“…healthy human cells can TAKE UP foreign DNA spontaneously. Foreign human DNA will be transported into nuclei and be integrated into host genome, which will cause phenotype change. Hence, residual human fetal DNA fragments in vaccine can be one of causes of autism spectrum disorder in children through vaccination.‘ Spontaneous Integration of Human DNA Fragments into Host – Dr. K. Koyama, Dr. Theresa. A. Deisher Ph.D.

The effects of injecting foreign DNA (from the opposite gender) has effects that are devastating and far reaching. We don’t realize the breadth or depth of them yet, but we’re seeing some of them manifested in the chronically ill sick children in our nation.

Are Human DNA Fragments a Cause of Leukemia or Lymphoma?

Dr. Theresa Deisher, lead scientist noted that, “Not only are the human fetal-contaminated vaccines associated with autistic disorder throughout the world, but also with epidemic childhood leukemia and lymphomas.”

The US government has known about the dangers of human DNA from aborted fetal cell-lines since at least 2005. They set guidelines which are supposed to keep the DNA at a specific limit, which they hypothesize won’t cause cancer.

With no safety studies, they regulated the amount of human DNA to no greater than 10ng. Unfortunately, Dr. Deisher’s team found the fetal DNA levels ranged from 142ng – 2000ng per dose, way beyond the guesstimated “safe” level. Dr Deisher’s work is available on the Sound Choice website.