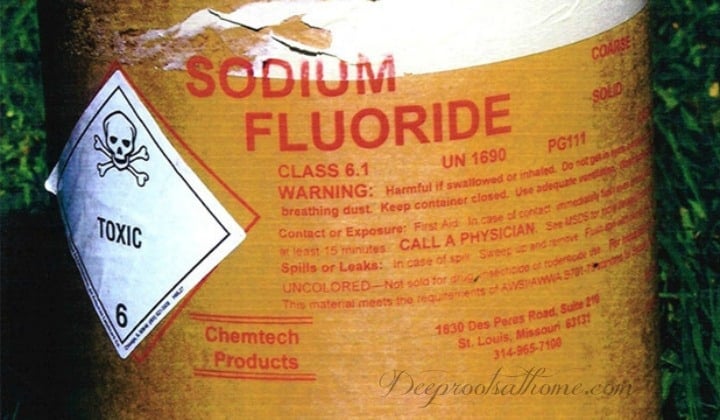 Did you know that fluoride can damage fertility, destroy bones, causes hyperactivity and lower IQ in children?

Did you know that the US is one of only eight countries in the entire developed world that fluoridates?

Even China does not allow water fluoridation because it’s too toxic and causes damage, according to their studies. Instead, the waste product from their phosphate fertilizer industry is shipped to the United States, where we add it to our water supply! (source)

Water fluoridation has been rejected and banned in many countries including: Israel, Austria, Belgium, Finland, Germany, Denmark, Norway, Sweden, the Netherlands, Hungary, India, China, and Japan. Nearly all of Europe’s water supply is fluoride-free.

It started in 1945 when local water treatment facilities began to add sodium-fluoride to our water supply. Now, fluoride is ubiquitous in the American food supply. Not only is it in our home water supply, but also in bottled water, in juice, soda, wine and coffee, in soups and processed food, and in baby formula…anything reconstituted with tap water.

According to Dr. Mercola, “fluoride is a toxic industrial waste product and a neurotoxin, which is also contaminated with lead, arsenic, radionucleotides, aluminum and other industrial contaminants.

The story gets even more convoluted, as now declassified files of the Manhattan Project and the Atomic Energy Commission show that the original motivation for promoting water fluoridation in the United States was to protect the aluminum-, and other fluoride-polluting industries from liability. In the early days some of the sodium-fluoride used to fluoridate water supplies in the U.S. came from Alcoa.”

Dr. Russell Blaylock M.D. is a retired neurosurgeon and author whose trailblazing research has tirelessly documented the fact that there is an epidemic of neurological disorders in the western world which are directly connected to toxins in our environment. I have respected his research so much through the years, especially on neurotoxic aspartame and MSG.

I am not a “conspiracy theorist” (nor is he), but I found this fascinating and you may, too.

Researchers at Harvard University performed a meta-analysis of 27 different epidemiological studies on fluoride levels in water and neurobehavioral development.

Fluoride is a poison, and though the amount of fluoride in toothpaste is pretty small, we’re putting into our mouth twice a day, 365 days a year. When male rats were exposed to 2, 4, and 6 ppm of sodium-fluoride in their drinking water, their testicles and prostate gland shrank in size. In addition, sperm counts plummeted and the sperm that were produced were dysfunctional. The concentration of protein in the testes (needed to manufacture new sperm) was also significantly suppressed. (source – Toxicol Ind Health, Oct. 2007; Vol. 23, Number 9, pp. 507-13)

A US epidemiological study showed very increased rates of infertility among couples living in areas with 3 ppm or more fluoride in the water (Freni 1994). Two studies showed reduced level of circulating testosterone in males living in fluoridated areas (Susheela 1996; Barot 1998). Do we want to see less courage, initiative, and leadership tendencies in our young men? (source)

2. Damage To the Brain

“It appears that fluoride has the ability to interfere with the functions of the brain.” — the National Research Council (2006) (source)

The US Environmental Protection Agency (EPA) lists fluoride among about 100 chemicals for which there is “substantial evidence of developmental neurotoxicity.” Experiments on animals reveal that fluoride accumulates in the brain and alters mental behavior (Mullenix 1995). There have been over 100 animal experiments showing that fluoride damages the brain and impacts learning and behavior.

The human placenta does not prevent the passage of fluoride from a pregnant mother’s bloodstream to the fetus. As a result, a fetus can be harmed by fluoride ingested during pregnancy.

There have been 24 studies from China, Iran, India and Mexico that show an association between fluoride exposure and reduced IQ. One research team (Xiang 2003a,b) estimated that fluoride may lower IQ at 1.9 ppm (parts per million), while a recent preliminary study (Ding 2011) found a lowering of IQ in children drinking water at levels ranging from 0.3 to 3 ppm (relatively low levels).

The authors of this latter study reported that for each increase of 1 ppm fluoride measured in the urine there was a loss of 0.59 IQ points. According to the National Research Council (2006), “the consistency of the results [in fluoride/IQ studies] appears significant enough to warrant additional research on the effects of fluoride on intelligence.”

Bottle-fed babies receive the highest doses of this toxin. Since they have a liquid diet, formula-fed babies have the highest exposure. As a result, researchers have recommended that parents not use fluoridated water when reconstituting formula for their babies (Ekstrand 1996; Pendrys 1998; Fomon 2000; Brothwell 2003; Marshall 2004).

The American Dental Association (ADA), the biggest advocates of fluoridation, sent a November 6, 2006 email alert to its members advising that parents should make baby formula with “low or no-fluoride water.”

Reduced IQ is not the only neurotoxic effect.

Fluoride affects the pineal gland. Studies by Jennifer Luke (2001) show that it accumulates in the human pineal gland to very high levels. In her Ph.D. thesis, Luke has also shown in animal studies that it reduces melatonin production and leads to an earlier onset of puberty (Luke 1997). Consistent with Luke’s findings, one of the earliest fluoridation trials in the U.S. (Schlesinger 1956) reported that on average young girls in the fluoridated community reached menstruation 5 months earlier than girls in the non-fluoridated community.

Studies: It causes hypothyroidism which affects the reproductive system in rats. And Chronic Fluoride Exposure and the Risk of Autism Spectrum Disorder!!!

Without bioavailable iodine, your thyroid becomes underactive. People with underactive thyroid glands tend to gain weight. In 1955, the New England Journal of Medicine reported a 400% increase in the number of thyroid cancer cases in the years after San Francisco’s water began to be fluoridated. (source-Alexander MJ. Occurrence of thyroid cancer in San Francisco. N Engl J Med July 14, 1955)

Skeletal fluorosis (a fluoride-induced bone and joint disease) mimic the symptoms of arthritis. According to an article published in Chemical & Engineering News, “Because some of the clinical symptoms mimic arthritis, the first two clinical phases of skeletal fluorosis could be easily misdiagnosed as arthritis” (Hileman 1988). According to the CDC (2002), 1 in 3 Americans have some form of arthritis.  It usually takes years of misdiagnoses before doctors finally correctly diagnose the condition as fluorosis.

Cipro, Levaquin, Avalox: Fluoroquinolone Antibiotics That Will Ruin You!!

An early fluoridation trial (Newburgh-Kingston 1945-55) revealed a two-fold increase in bone defects among children in the fluoridated community (Schlesinger 1956), and in 2001, Alarcon-Herrera reported a correlation between the severity of dental fluorosis and the frequency of bone fractures in children and adults in a high fluoride area in Mexico. (source) There is also a tie between fluoride in the domestic water and periodontal disease.

9. Hip Fractures in the Elderly

Failure!! Fluoride (average 26 mg per day) was used in trials to treat patients with osteoporosis in an attempt to harden their bones and reduce fracture rates. This treatment actually led to a higher number of fractures, particularly hip fractures (Inkovaara 1975; Gerster 1983. (source)

One Chinese study looked at hip fractures in six Chinese villages, and found an increase in hip fractures as the concentration of fluoride rose from 1 ppm to 8 ppm (Li 2001).

It is illegal to dump this toxin into our lakes and rivers, but somehow it is OK, ‘just fine’ to put in our drinking water and toothpaste!

How To Effectively Filter Fluoride From Your Own Water

Other Things To Avoid Fluoride 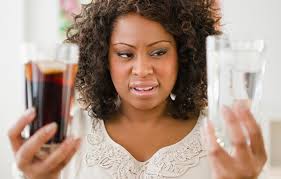 Learn ways to seriously reduce you and your family’s Fl intake. 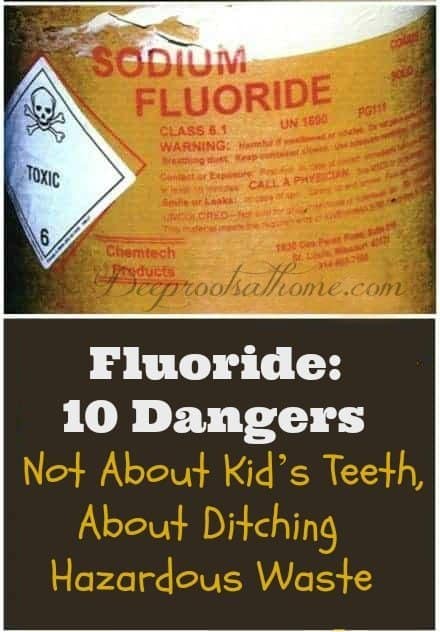 Share49.6K
Telegram
Pin267
49.9K Shares
« Activated Charcoal: Why No Mama Should Ever Be Without It
How To Make A Charcoal Slurry For Poisoning Or Acid Reflux »