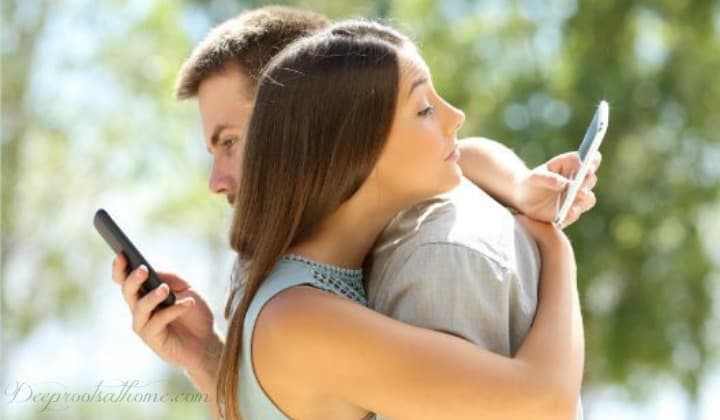 According to former Google product manager, Tristan Harris, Silicon Valley is engineering your apps, social media and phone to get you to form a habit.

Tech companies which program your phones are working hard to get you and your family to feel the need to check in constantly. Some programmers call it “brain hacking”. The tech world would probably prefer you didn’t hear about it.

“Every time I check my phone, I’m playing the slot machine to see, “What did I get?” This is one way to hijack people’s minds and form a habit. What you do is you make it so when someone pulls a lever, sometimes they get a reward, an exciting reward. And it turns out that this design technique can be embedded inside of all these products.” 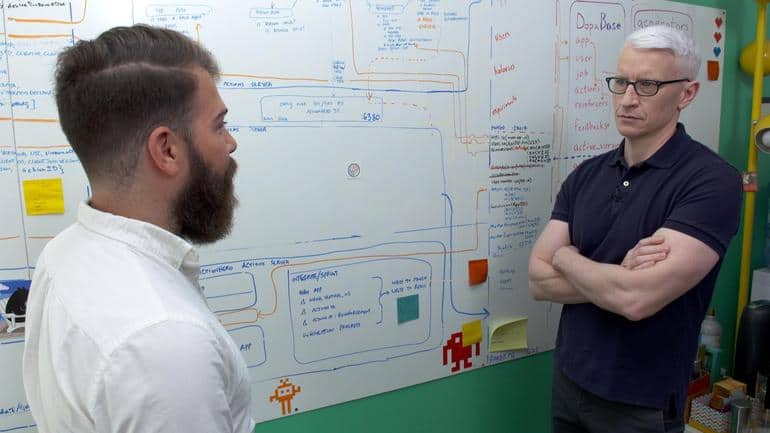 Ramsay Brown (above) is a computer programmer who now understands how the brain works knows how to write code and write algorithms that will get the brain to do certain things ‘by design’.

For any company who profits from engagement-based advertising, they make more money based on the more time people spend on their product.

Smartphones and social media are changing the way our brains work. Scientist are zeroing in on what’s happening, and the problems may go well beyond anything we could have conceived in our wildest dreams.

Someone summed it up, “Compared to virtual reality, toys are boring, friends are boring, parents are boring. Life is boring!” And we are being conditioned to believe that.

Pleasure vs Happiness (Contentment): The Chasm of Difference

If you’re confused between happiness and pleasure, don’t feel alone. Google “pleasure” and what you’ll read is “a feeling of happy satisfaction and enjoyment.” Money can buy you pleasure, but happiness has to come from somewhere else.

Dr. Lustig, author of “The Hacking of the American Mind: The science behind the corporate takeover of our bodies and brains” states, “If you’ve been told your entire life that pleasure is happiness, then you’re in [big trouble]”.

Dr. Robert Lustig, pediatric endocrinologist, would define it this way: “Pleasure is short-lived, visceral, usually experienced by oneself, achievable with substances. Happiness, by contrast, is often the opposite—long-lived, ethereal (purposeful, transcendent), often experienced in meaningful social groups and cannot be achieved through substances. Pleasure is taking, while happiness is giving.” 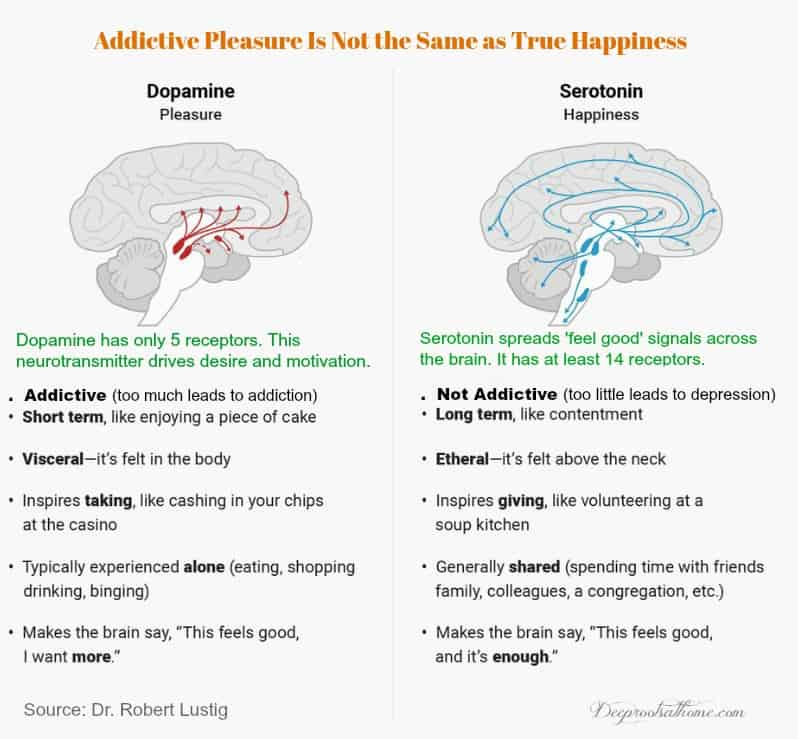 Lustig began to study the effects of children consuming refined sugar, and now he’s worried that tech could be working on our brains in similar, addictive ways. He says, “Technology is a dopamine stimulator. Anything that causes dopamine to rise has, as its end point, addiction.” It feeds a potentially dangerous system of motivations and rewards in our brain, leaving us craving another hit.

This is super interesting. 13 minutes.

Dopamine (Pleasure) vs Serotonin (Happiness): Only One Can Win

You can’t get contentment from an app or from a purchase, but you can click or buy your way to a whole lot of reward and pleasure.

Pleasure relies on dopamine, while happiness relies on serotonin. These 2 emotions involve two different neurotransmitters, regulatory systems and pathways in the brain.

Why should anyone care?

Dopamine downregulates its own receptor: You get the hit, then a rush (actually killing neurons)—and then the receptors go down (to try and stop the damage) leaving you with a desire to repeat the rush. So to fire the receptors again you need more than the last time… and then more. Anything that generates pleasure can lead to addiction.

Alternately, serotonin does not downregulate its own receptor (because it is so needed by the body), so you can’t overdose on too much happiness.

Unfortunately, though, dopamine does downregulate serotonin increasing risk of depression. The more pleasure we seek, the less truly happy we become.

Because of this, many believe society has become increasingly stressed, depressed, dumbed-down and broke. Understanding the science-based battle between these 2 very different emotions may help you take back your life if you are controlled by it.

Ultimately, those who bypass happiness for pleasure will end up with neither.

We now scientifically know media multitaskers pay a mental price which decreases our focus. This is true for almost all of us.

Psychologist David Meyer who’s studied this effect of flip-flopping between check-ins, interruptions and transactions on a phone or computer tells us we’re actually shooting ourselves up with a dose of the stress hormone cortisol, every time. 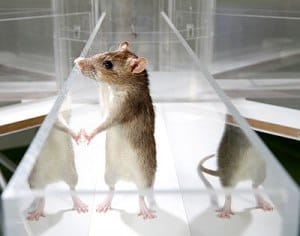 Brain Hacking On a Grand Scale

This technique isn’t just used by social media, it’s intentionally all over the internet. Airline fares that drop at the click of a mouse. Overstocked sofas that are there one minute and gone the next. We’ve gotta have it all, we’ve gotta have more, and we’ve gotta have it now. We’re scratching addictive pleasure itches all over our screens.

Like gambling, they do it on an unpredictable schedule. That’s called a “variable ratio schedule” and its something the human brain goes crazy for.

“Whether they want to or not, they are shaping the thoughts and feelings and actions of people. They are programming people. …It’s weakening our relationships to each other, and destroying our kids ability to focus. ~Tristan Harris

Hopefully, we can learn the difference between a quick rush of pleasure and the long-lasting contentment that is the true definition of happiness. When we substitute pleasure for true connectedness, we lose so much.

There are positive things parents can do to prevent this:

Why Are Kids Impatient, Bored, Friendless, and Entitled?

“May the God of hope fill you with all joy and peace as you trust in him, so that you may overflow with hope by the power of the Holy Spirit.” ~Romans 15:13 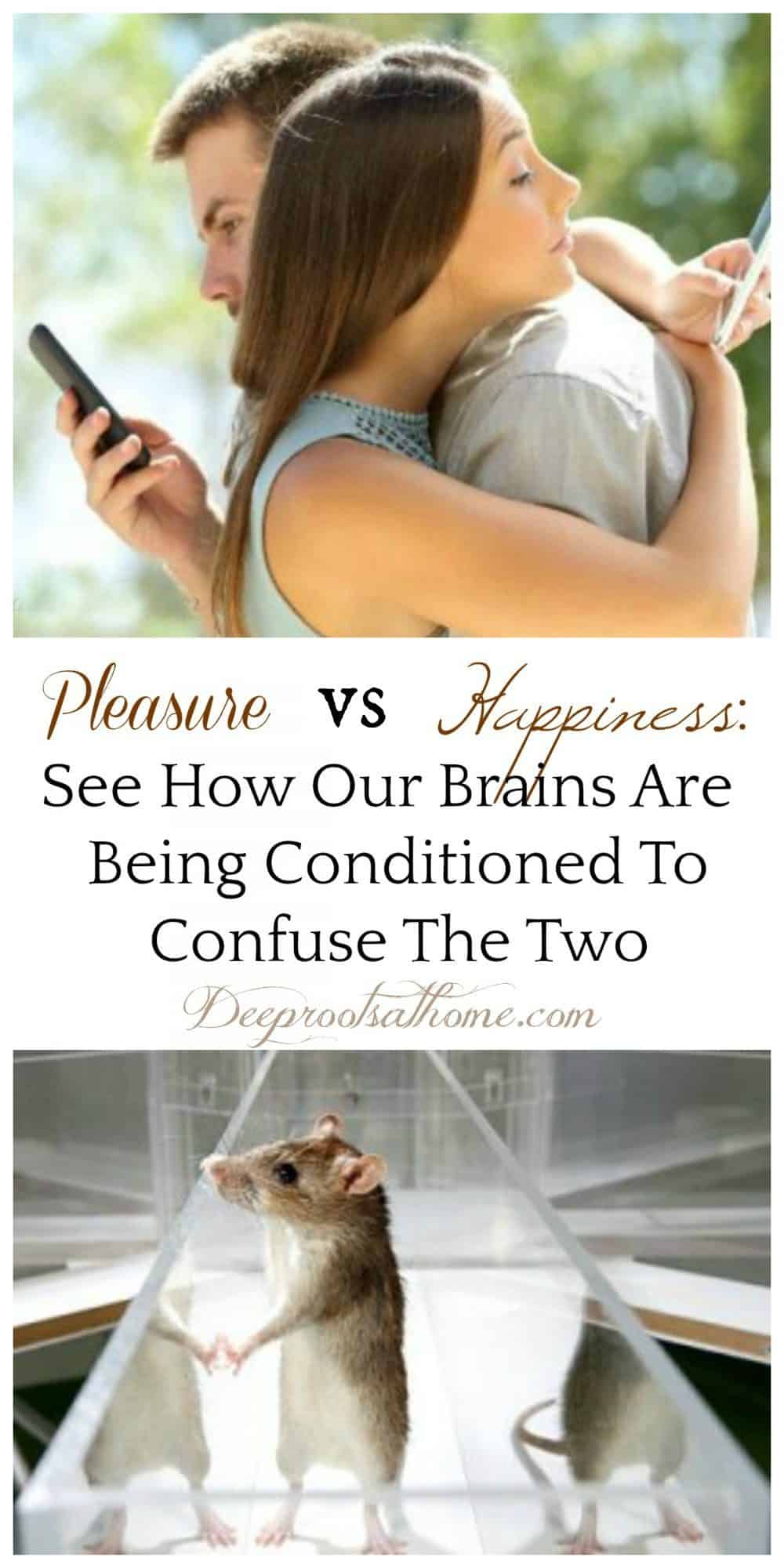