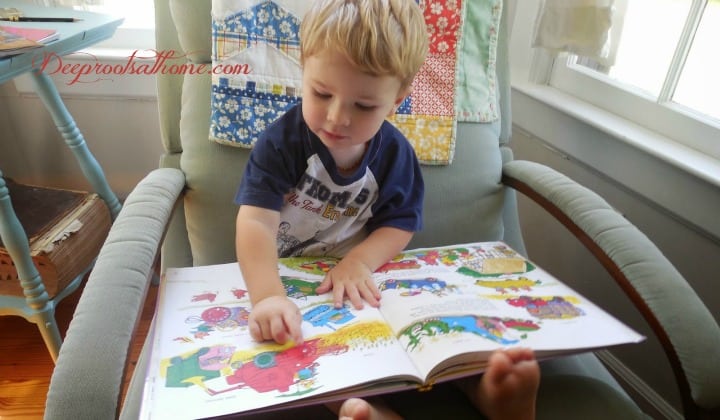 I just have to say, we think Richard Scarry books are THE BEST for teaching observation skills.

Little ones gain ability to sit and absorb detail in the old-fashioned way that lights up a child’s brain as they make connections in the world around them.

So much better to start them out with great books in hand than devices that don’t equate to actual processed knowledge!

Studies show that children with as little as two hours of screen time daily got lower scores on tests focused on thinking and language skills.

I attribute these books to our son’s early love of learning that has never waned. Today, he is a pilot for a major airline at 27.

For his first Christmas (’91), his Uncle Clee and Aunt Cheryl gave him Richard Scarry’s Best Word Book Ever. (I confess I was disturbed by the name before I knew how delightfully innocent and winsome it was, for I’d never heard of Richard Scarry before).It hands-down our son’s most treasured young children’s book. I can attest that we’ve spent over 100 hours snuggled up with that book – maybe more, and we never got bored.

Richard Scarry was how all of our children learned to read!

Richard Scarry is perhaps the world’s best-loved children’s authors ever! 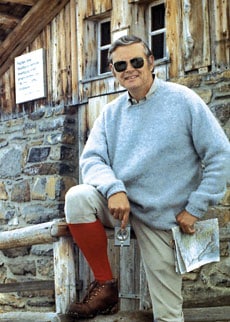 In his extraordinary career, Richard Scarry illustrated over 150 books, many of which have never been out of print. His books have sold over 100 million copies. Generations all over the world have grown up spending hours pouring over his books filled with all the colorful details of their daily lives. No other illustrator has shown such a lively interest in the words and concepts of early childhood.

When our oldest married, I lovingly tucked his well-loved Best Word Book Ever into his memory box, and I have no doubt it will be passed down one day.

You may never need to turn on the TV or videos to entertain your children with these books. Richard Scarry and I Spy books are great visual recognition and discrimination skill builders. 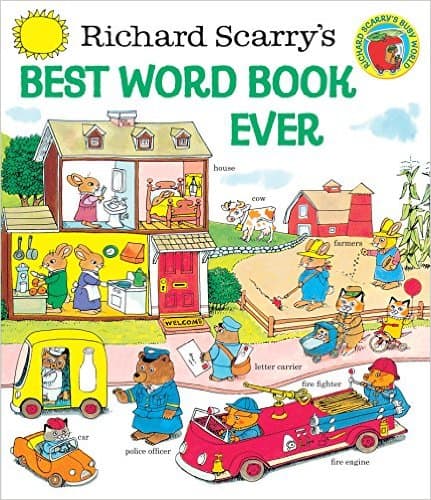 Words, words, words! Young children everywhere want to define their world. Richard Scarry’s Best Word Book Ever was the first of our collection.

I have read that the newer printings have reduced the number of pages, are more politically correct, and have a weaker binding. You may want to go for an older (gently used) printing. Our original was a hardback 10″ x 12″ and held up to years of wear and tear.

Richard Scarry’s Best First Book Ever is a concept book. It is outstanding for its scenes which help organize a child’s thoughts, containing over 700 new words.

For example, one page has vehicles and conveyances.

Another is a market full of different vegetables and fruits, meats, canned goods, and shipping carts.

Another page makes you to turn the book sideways and a huge cat with all the labeled body parts takes up both pages.

Another page is a cut-away of a house showing each room, while another page has the alphabet.

You won’t pick this book up and read it front to rear, rather open a few random pages and marvel at Richard Scarry’s mind! 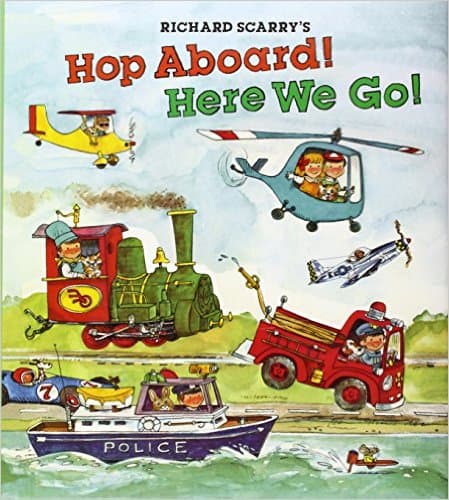 If your kids like anything that has an engine…they will love Hop Aboard! Here We Go! Richard Scarry did not slap his books together. He obviously spent quite a bit of time and detail on each picture. 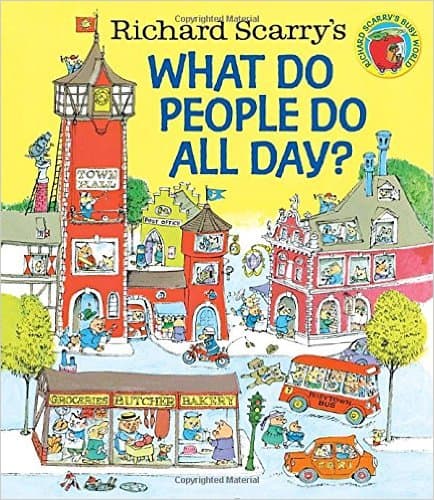 When reviewing What Do People Do All Day?, one happy Amazon reviewer states, “FINALLY! Re-Released in all its glory. I checked and the number of pages was 96! I was still a bit skeptical, I hadn’t seen a full length version since my childhood (at least 25 years ago!) at the local library – but I purchased it thinking it was worth the chance. What a great revelation to see the stories I had not seen in years.” 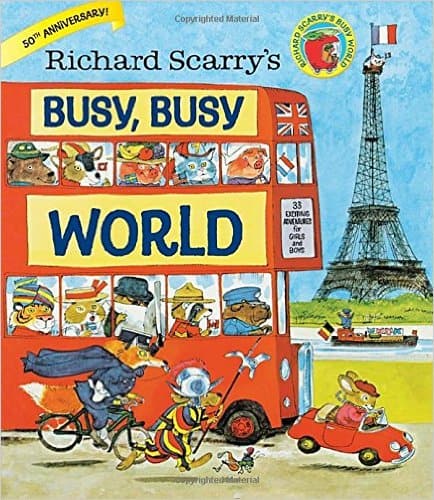 Sadly, Richard Scarry‘s Busy, Busy World was out of print! Well, now it’s back with all 96 pages!

Click on the book in this link and take a ‘Look Inside’. See the rich, wonderful, amazing fun you will have!

As implied by the title, Busy, Busy Town tells how everyone does their work in a hometown environment. Children are going to know about professions and careers like bankers, doctors, sanitation workers, clerks, policemen, pilots, various vendors, and lumber workers. Children will learn a broader and out-of-the-ordinary vocabulary.

are totally wholesome and engaging. 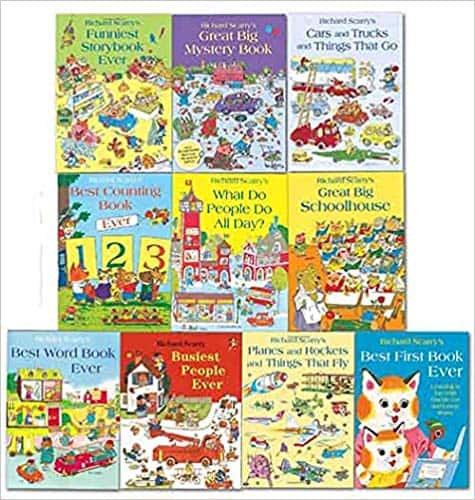 (FYI: As an Amazon Associate I earn from qualifying purchases.)

Check out other Deep Roots at Home book lists with completely different content. Thank you! 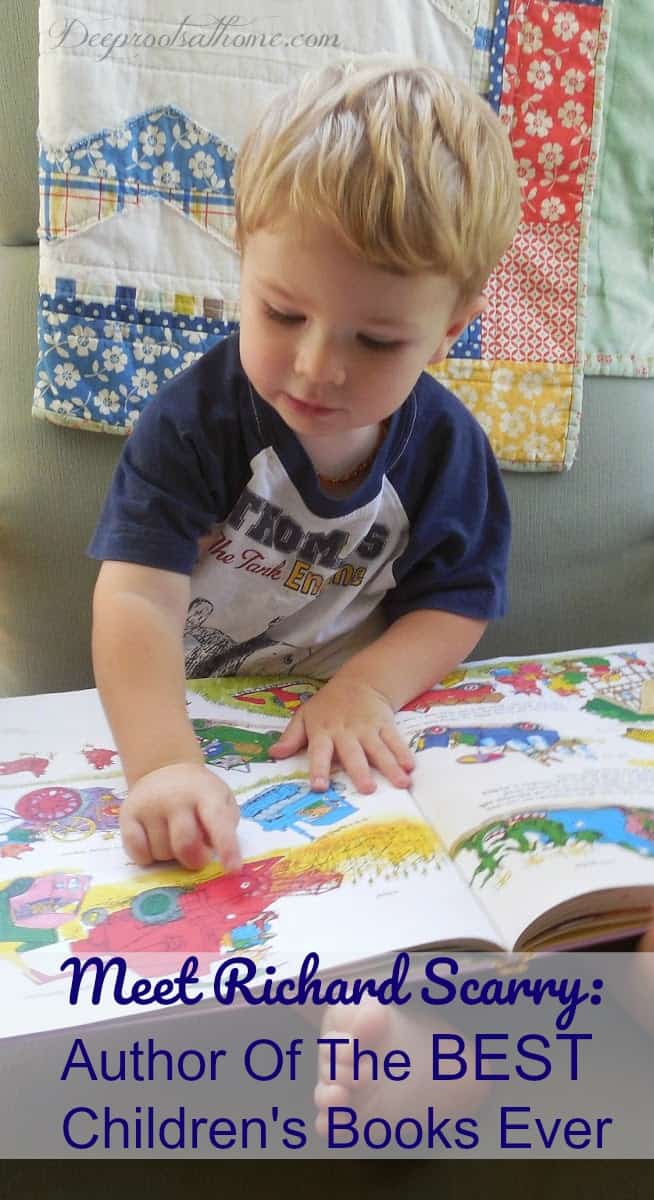 Share17.3K
Telegram
Pin178
17.5K Shares
« Mix-N-Match Feminine Style With a Sense of Fun and Color
Alzheimer’s Drugs: Patients Get Worse while Coconut Oil Shines for Many »