Over 3 years, Germany’s central scientific institution, the Robert Koch Institute, accessed the mental and physical health of children up to age 17. The study (named KIGGS) of 17,641 children gathered a whopping amount of data, including their vaccination status.

With a love for numbers and logical correlations, mathematician and statistician Angelika Kögel-Müller made a statistical assessment of the information pertaining to health regarding vaccination. She’s published the results in her article ‘Impfen macht krank‘. This is the English translation of the article.

Though attacked for her conclusions, the results of her investigation clearly show and confirm that vaccine-free children are healthier than vaccinated children. A follow-up study was financed by manufacturers of the sextuple vaccine which obviously doesn’t contribute to the study’s neutrality. But surprisingly, follow-up findings to refute her work still hadn’t been made available by the end of 2008. And in 2012, a lecture concerning the topic was announced for a specialist conference, but cancelled at short notice without giving reasons why.

Yet another large study makes the same conclusion. Make your own conclusions as you read further!

One highly statistically significant finding is that scoliosis, which is an abnormal curvature of the spine, was found in 5.3% of vaccinated children, while among the vaccine-free children the number of scoliosis cases was 0. (Source) You can see for yourself the increase in numbers for otitis media (middle ear infections) and pneumonia.

Simply stated, because vaccines are neurotoxic and could conceivably cause specific nerves in the spine to be inflamed and thus damaged, the spine is pulled out of alignment, resulting in an abnormal curvature of the spine (scoliosis).

Can a Vaccine Cause Scoliosis?

This young man has asymmetry of the facial and eye muscle and spinal scoliosis. The asymmetry of Tan’s face, affecting particularly his left eye and his mouth, is also noteworthy as such facial asymmetries are not rare – as we will see in a moment. 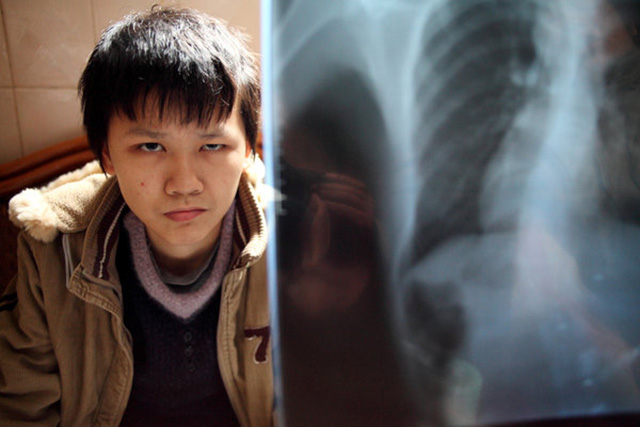 The Perfect Storm for Why This Happens

The smallest of these vessels are located in your hands, feet, eyes and brain, particularly by the area which controls speech. Tiny capillaries are so small that white blood cells have to squeeze through one at a time. When so many white blood cells are released, they cannot squeeze through (blocking red blood cells carrying oxygen) so the oxygen and blood supply is restricted for a period of time. When severe enough, permanently.

The result is ischemic brain stroke with gross inflammation, and can be seen as loss of facial asymmetry (crookedness), strabismus (loss of eye coordination) and loss of muscle tone around the eyes, cheeks, and mouth.

These micro-hemorrhages and resulting inflammation occur in an enclosed cranium (skull) resulting in brain swelling/pressure and consequently neurological damage to brain tissue with lowered blood flow.

In the interest of the unaware public, I think we should at least be aware of these occurrences!

In this excellent video, scoliosis is addressed at 18:45:

See these wide range of neurological injuries – some permanent, some recurrent and others temporary.

These all indicate damage:

Damage to the cranial nerves controlling eye movement results in loss of eye coordination (strabismus), as in this girl.

An Italian Journal of Pediatrics study is entitled Partial third nerve palsy after Measles Mumps Rubella vaccination and states, “MMR viruses are neurotropic. Therefore, although the vaccine is obtained by live attenuated viruses, vaccination may produce neurological disorders.” One example, a “20-month-old Italian boy (below) who received a MMR (VAX PRO) vaccine dose according to the normal vaccination schedule.”

Photos of Bernhard Buchwald – the one on the left before, and the damage about 4 weeks after a vaccination he was given at the age of 18 months. A leading German professor who examined him (correctly) predicted that severe mental impairment would become evident as the boy got a bit older. 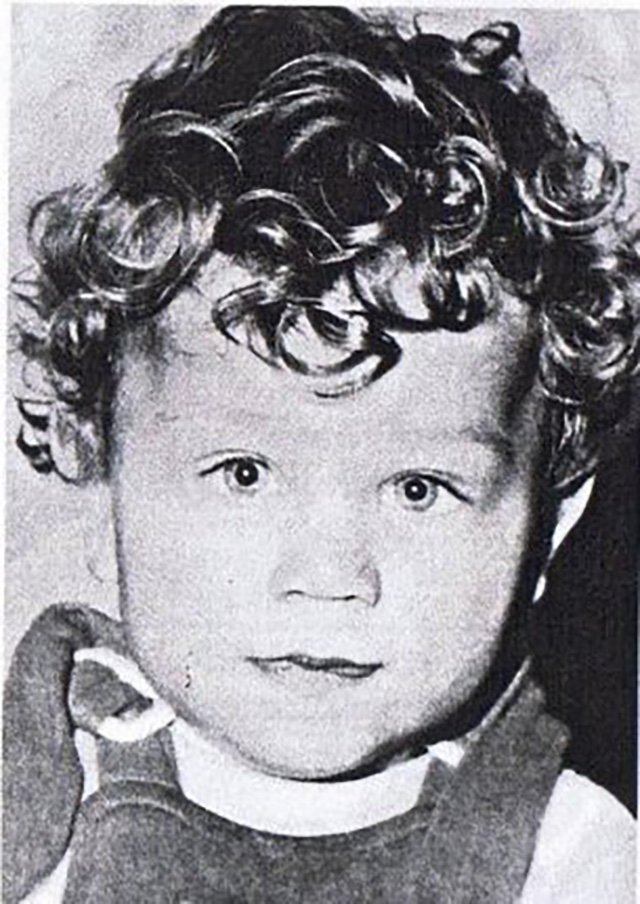 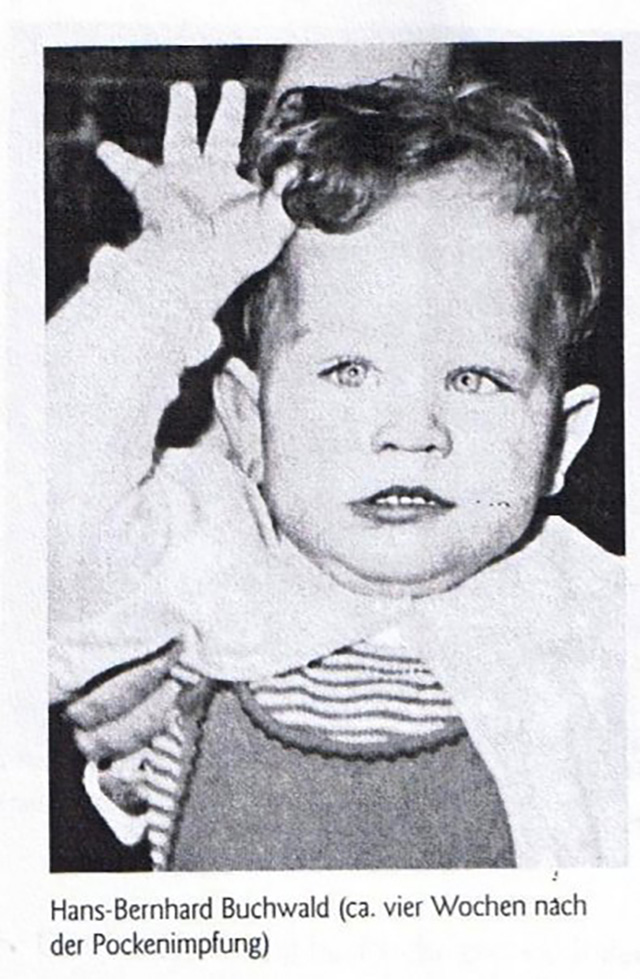 “The facial nerve of this little girl in this photo was damaged when she suffered a stroke caused by a round of vaccinations. This picture was taken five days after the shots – and as it turned out, two days before she died.

“Tell anyone you know who vaccinates to scrutinize their child’s face before and after the next round of shots, looking for any unilateral change – an eye moved to one side, a droop of one side of the mouth; anything – even one eye blinking slightly out of sync with the other. They’re all signs of a stroke – and of obviously serious vaccine injury.”

What To Look For In Strabismus & Stroke Damage 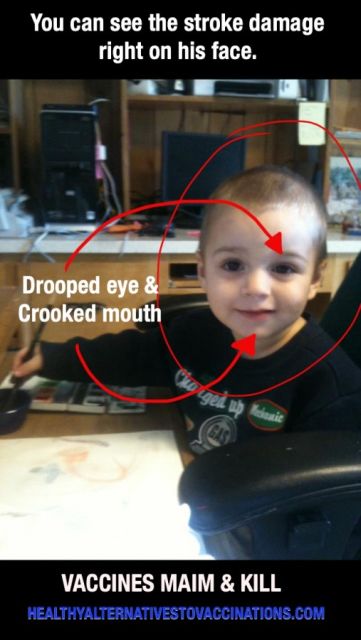 MMR Vaccine made my child disabled in 3 days.
https://www.facebook.com/RevolutionForChoice/videos/129393464134915/?hc_location=ufi

Parent of girl above wrote, “Study suggests that 6th nerve paralysis is a known condition and had been documented in connection to vaccination: Recurrent 6th nerve palsy in a child following different live attenuated vaccines: cases report in peer-reviewed Journal BMC Infectious Disease.”

According to the Court Case Transcript: “The Court found that Bailey Bank’s Acute Disseminated Encephalomyelitis (ADEM) (including strabismus) was both caused-in-fact and proximately caused by his vaccination. It is well-understood that the [MMR] can cause ADEM, and the Court found, based upon a full reading and hearing of the pertinent facts in this case, that it did actually cause the ADEM.”

“Vaccinations, including the Gardasil vaccine, the flu shot, MMR vaccine, and Hepatitis B vaccine, can cause Encephalomyelitis (ADEM). Symptoms may begin immediately after vaccination, or take up to a few weeks to arise.” (source)

Another optic trauma seen post-vacc: Papillitis (optic neuritis) in children most commonly presents following an infection but has been reported to occur after vaccination. These patients often develop optic atrophy as a result of the preceding inflammation. (source)

VAERS Database Reports on Strabismus (it is stated that less than 10% of these injuries are ever reported):

As an RN and mother, I believe in parental freedom of choice whether to vaccinate or not. I hope we can all respect each others choice to decide what is best for our individual children and resist the temptation to judge one another.

Those trying to teach about vaccine dangers have only one motivation: to prevent more suffering. We have either witnessed it first hand in our own family or know those who have.

A side note: Link between vaccines and peanut allergies are in video above at 19:40.

See my post on Proven Vaccine Detox If You See Your Child or Baby Regress. Adults, you can increase dose proportional to your body weight and take before and after shot, as well.

I'm always looking for effective, safe, low cost ways to help families and readers. TRS removes heavy metals, mold toxins and plastics residue, getting to the root cause. Viruses, bacteria and fungi cannot live in the body without metals which they feed on. Learn more

A Few of Our Favorite Products

The PDF will arrive in your inbox! You’ll also get about 1-4 emails a month (including the seasonal freebies!) and can unsubscribe at any time.

We’d love to keep in touch! And you’ll receive the important freebie of the season: “100 Whole-Hearted Books to Take Back the Culture” printable PDF.

We’d love to keep in touch! And you’ll receive this Dyslexia Resources from Sarah J. Brown:

• “Dyslexia Tips” ebook with practical advice you can use right away!

Your resources will arrive in your inbox! You’ll also get about 1-2 emails a month (including the seasonal freebies!) and can unsubscribe at any time.

We all want to stay happy and healthy this winter! Receive this important freebie: “Make Your Own Elderberry Syrup — with Easy Recipes!” printable PDF for you and your family. You’ll also get a coupon code for 15% off Sweet’s Elderberry Syrup if you don’t want to make it!

When it comes to vaccines, we want to know the facts, not someone’s opinion. Receive this important freebie: “Vital Vaccine Info” printable e-book for you and your family.

The e-book will arrive in your inbox! You’ll also get about 1-2 emails a month (including the seasonal freebies!) and can unsubscribe at any time.

We use cookies on our site. If you continue to use this site you consent to the use of cookies or you may opt out here. Read more. Ok