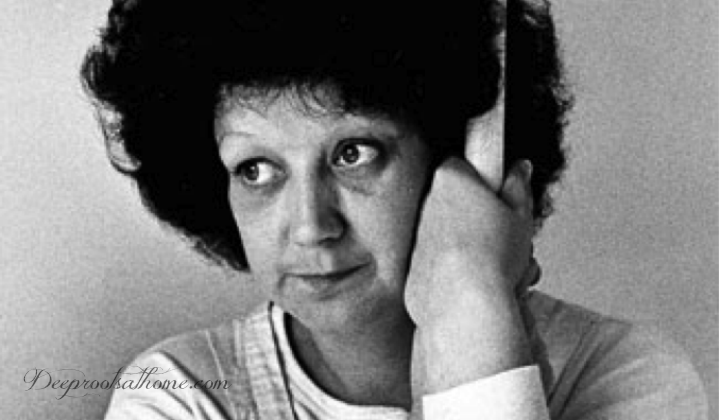 Few Supreme Court rulings have been as consequential as Roe vs. Wade, but until her death in 2017, not many know the true story of the pseudonym-cloaked plaintiff ‘Jane Roe’.

For some reason, I distinctly remember the morning I read about it in January of 1973; my sweetheart and I were to be married later that year. Oddly enough, this story and my life are forever intertwined, for 18 years later after battling infertility partly due to an abortion, we miraculously gave birth to our firstborn son on the 18th anniversary of Roe vs. Wade.

The life of Norma McCorvey, otherwise known as ‘Jane Roe’, is a fascinating human interest story; indeed, it is much more than that. Gleaned from interviews, court testimonies, and memoirs, Justin Taylor of The Gospel Coalition shares 5 things you may still not know about her.

(1) The name “Jane Roe” was created over beer and pizza.

In 1969, Norma was 21 years old, divorced, and pregnant for the third time. (The first two children were placed for adoption.) After seeking an abortion but finding out it was illegal, and then driving to an illegal clinic only to find it closed, adoption attorney Henry McCluskey referred her to two young lawyers in Dallas, Sarah Weddington and Linda Coffee. Weddington (who had traveled to Mexico a couple of years earlier to have an abortion) was seeking a class-action lawsuit against the state of Texas in order to legalize abortion. It was an unlikely party at the corner booth of Columbo’s pizza parlor in Dallas: two recent law-school grads in business suits sitting across the table from a rough and uneducated homeless woman. The lawyers needed a representative for all women seeking abortions—one who was young, poor, and white. They just didn’t want her to cross state lines to get a legal abortion, or the case would be considered moot and dismissed. Without money and five months pregnant, Norma was the ideal candidate. After downing several pitchers of beer, they agreed on using the pseudonym “Jane Roe.”

Weddington and Coffee told Norma that abortion just dealt with a piece of tissue, and that it was like passing a period rather than the termination of a distinct, living, and whole human organism. Abortion was a taboo topic in 1970, and Norma had dropped out of school at the age of 14. She knew that John Wayne movies talked about “aborting the mission,” so she thought it meant to “go back”—as in, going back to not being pregnant. She honestly believed “abortion” meant a child was prevented from coming into existence.

Her lawyers drafted a one-page legal affidavit, which she signed but did not read. This was only the second [and last] time she would meet with her lawyers. She would not be called to testify and attended none of the trial. She found out about the Supreme Court ruling from the newspaper on January 23, 1973, just like the rest of the nation. Few on that day understood the implications of Justice Blackmun’s instruction that Roe vs. Wade was to be read in conjunction with its companion case Doe v. Bolton, which effectively made abortion legal at any stage of pregnancy for any reason.

(4) Jane Roe never had an abortion.

Norma had already given birth and placed the baby for adoption before the three-judge Texas panel ruled against her in May of 1970, long before the Supreme Court decision in January of 1973. She was in a committed lesbian relationship and would not become pregnant again. Abortion continued to be a part of her life, however. She went on to work in abortion clinics, holding the hands of women and offering reassurance as they terminated their pregnancies, and making appearances on the Roe anniversaries.

In 1995, while working at the clinic, Norma became haunted by the sight and sound of empty playgrounds in her neighborhood. she began to see it was the result of what she once called “my law.”

The decisive change came when she met Emily Mackey, a seven-year-old girl whose parents were protesting at the clinic where Norma worked. Young Emily, who had almost been aborted herself, cared for Norma, showing love and genuine interest, later inviting her to church. Through little Emily’s strong truth and grace, along with those who shared the gospel of Jesus with her, Norma became convinced of the pro-life position and also professed to follow Christ.

Other Roe vs. Wade Players: 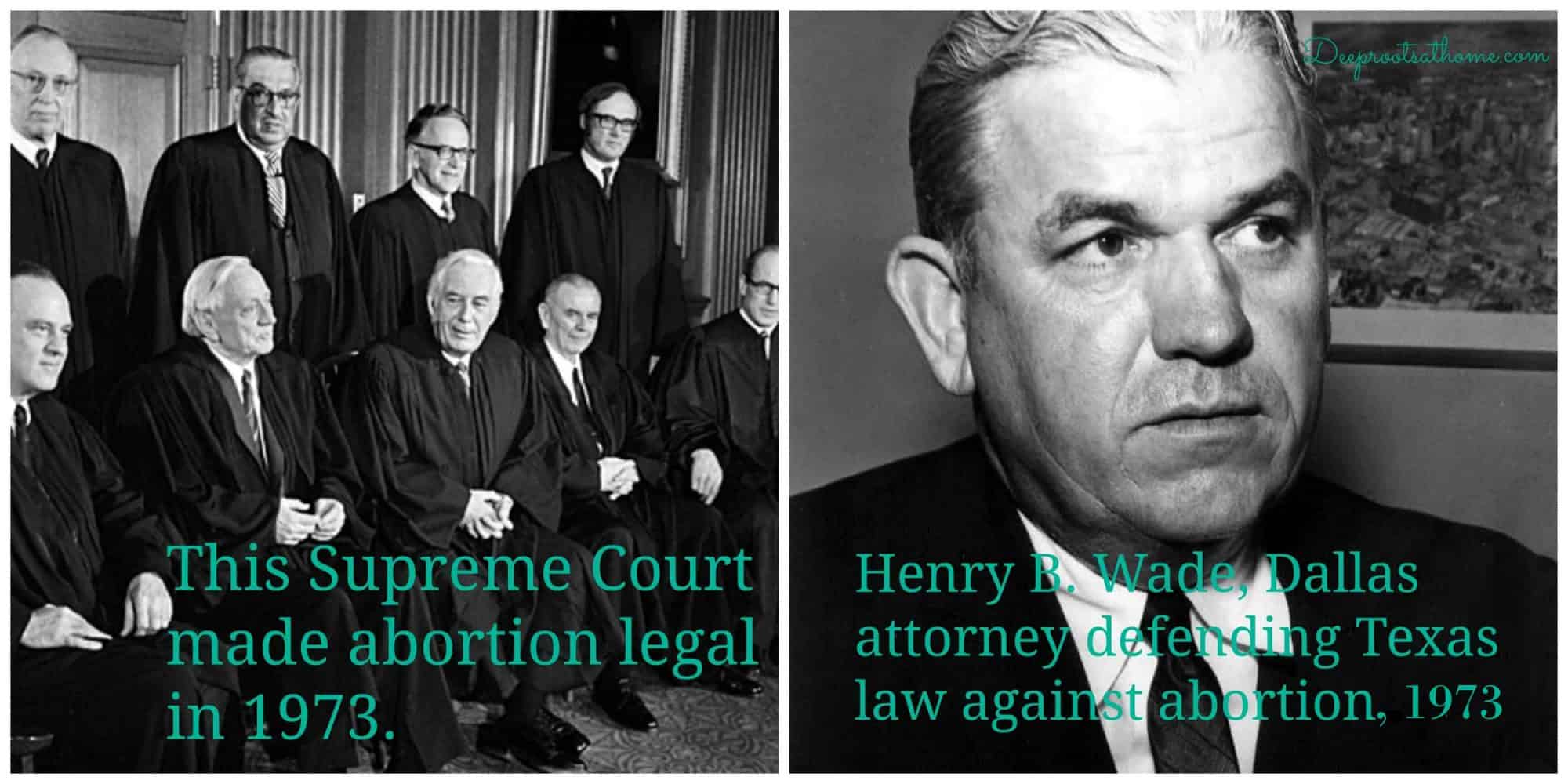 The final vote in favor of Roe was 7-2, with five Republican-appointed Justices and two Democratic-appointed Justices in step. Justice Harry Blackmun, who wrote the Majority opinion for Roe v. Wade, was appointed as a conservative by Richard Nixon but eventually became one of the most liberal justices on the Court. 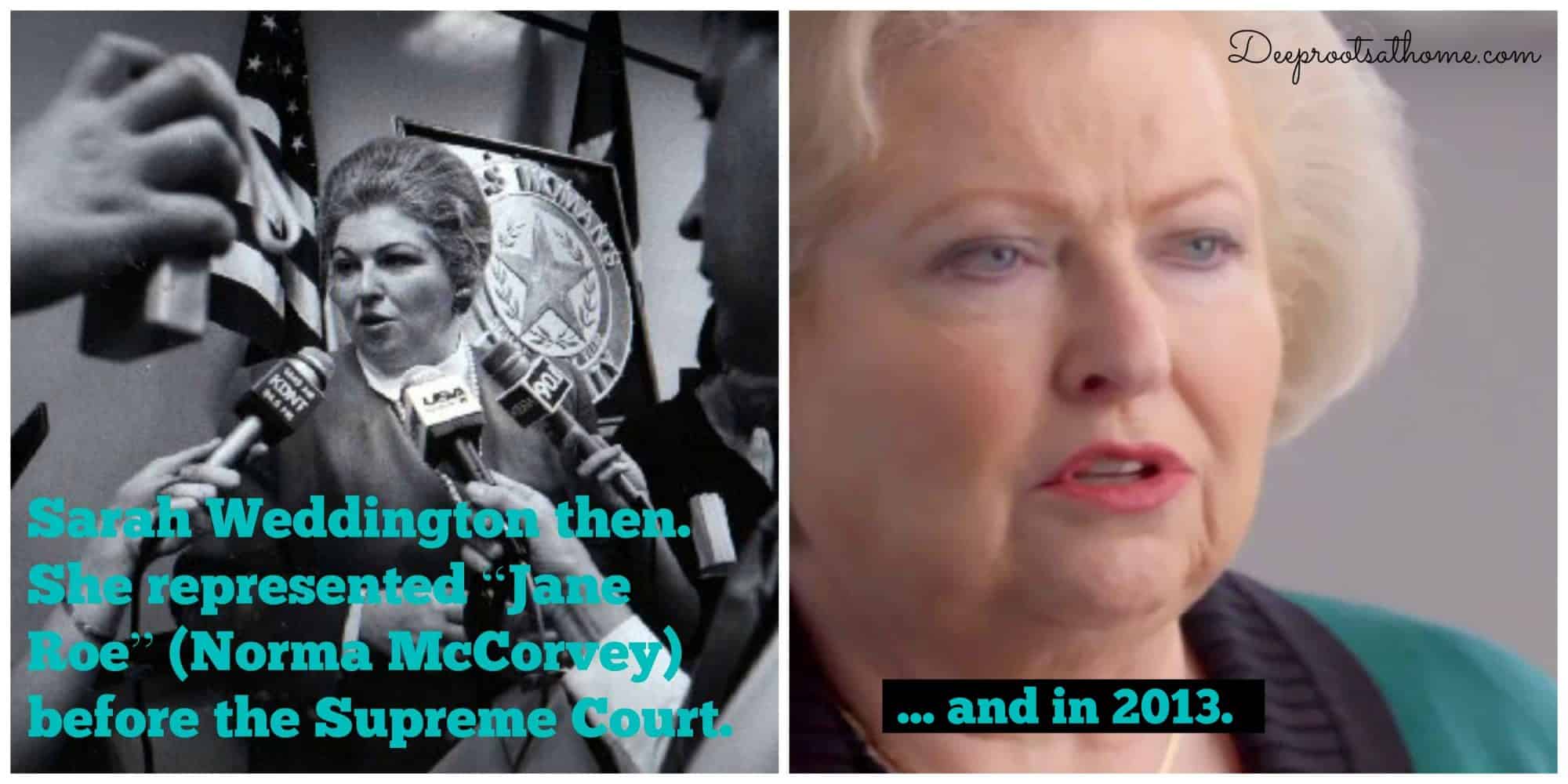 Sarah Weddington was the young attorney who represented ‘Jane Roe’ before the Supreme Court. She enjoyed much professional success after Roe vs. Wade. Today, Sarah Weddington has ‘no regrets’ about her part in this case.

As of 2019, there have been approximately 61 million legally-induced abortions in the U.S. since 1973—nearly the current population of California and Texas combined – but Weddington has no regrets. See the abortion counter.

After becoming an unwitting pawn to forward an agenda, Norma McCorvey had a heart change and became dedicated to overturning the terrible decision of Roe vs. Wade. Some believe she changed her mind again and even documented her apparent confusion, but we can never know the heart of another person.

The Lord desires to do miracles in our lives and ‘restore those years the locusts have eaten’ (Joel 2: 25-26). 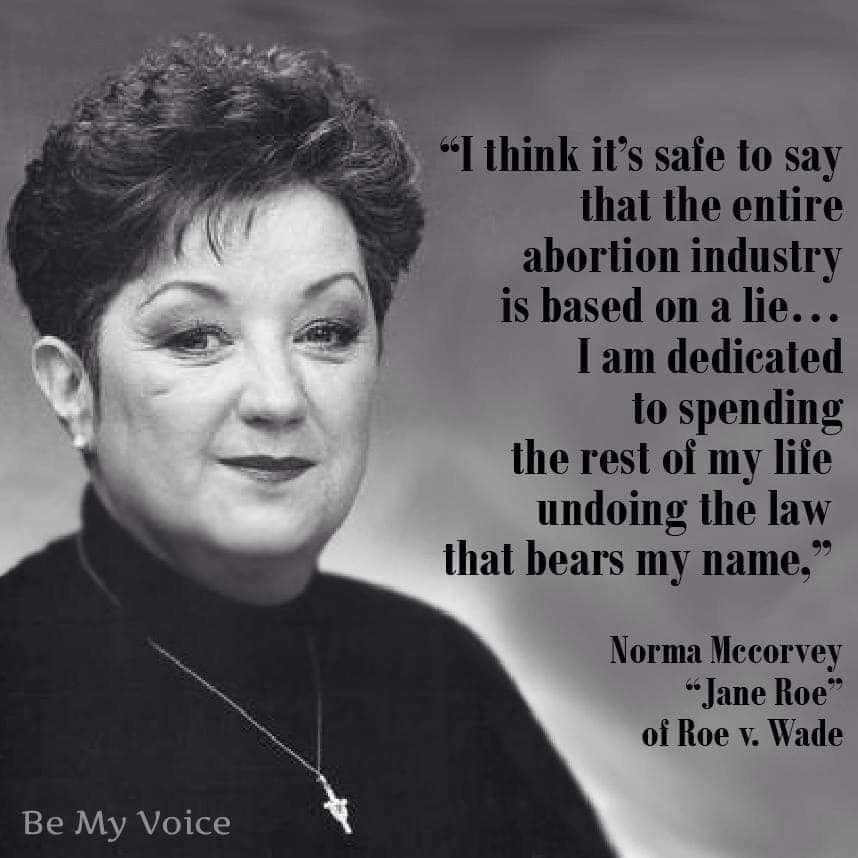 Testifying before the Senate in 1998, Norma McCorvey said: “I am dedicated to spending the rest of my life undoing the law that bears my name.”

She petitioned the Supreme Court to undo the Roe v. Wade decision, but it rejected her appeal. She was arrested at Senate hearings while protesting against the appointment of the pro-choice Sonia Sotomayor to the Supreme Court. She also made TV ads in 2012. 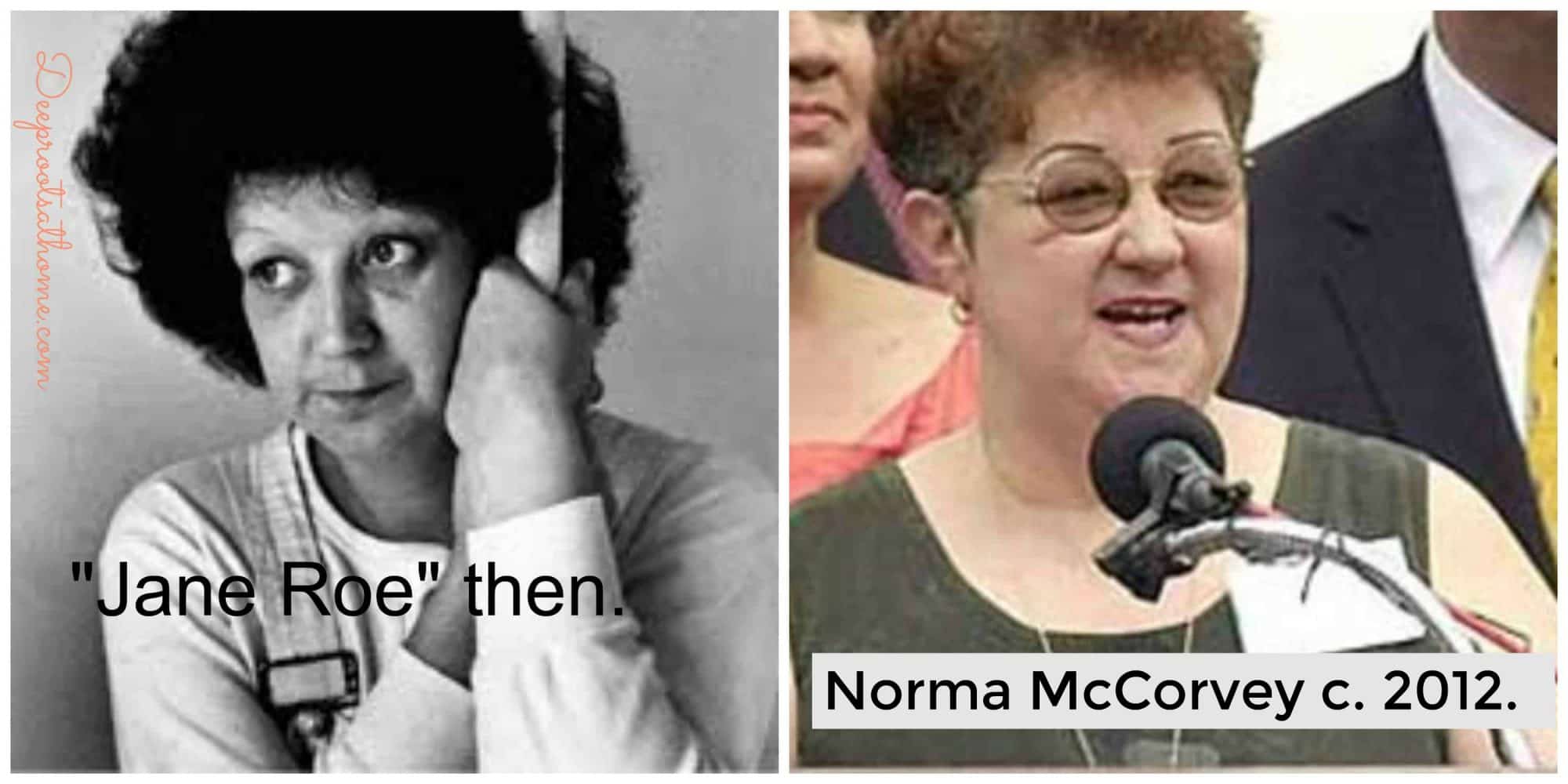 “If we confess our sins, He is faithful and just and will forgive us our sins and purify us from all unrighteousness.” ~1 John 1:9

Roe vs. Wade had a destabilizing effect on our lives, a lot of our friend’s lives, our nation and world, and in my opinion, the disastrous effects have never stopped.

My generation and beyond are now living witnesses to the destructive forces that occur when the laws of a country do not line up with God’s word. In nursing school, my colleagues and I were slowly led to accept “the fact” that the pre-born fetus wasn’t particularly valuable.

It is also interesting to note that, in Latin, “fetus” means “little one,” referring to the relatively small size of the preborn baby.

The understanding, long held in medicine, to “First, do no harm” has seemingly become irrelevant. Even though a baby’s heart begins to beat at 16-18 days, many overwhelmingly deny the personhood of an unborn child.

Public schools continue to teach children that the baby a woman is carrying is just a blob of connected tissue and not a living baby, and therefore, this lie is perpetrated on future generations and informs decisions about sexuality, the value and greater purpose for life, and how they relate to others.

It is my desire that this post is not seen as a condemnation of those who have faced the devastation of an abortion or used by the evil one to cause more guilt, but rather a call to prayer to our Heavenly Father to change our hearts, have mercy on us, and rid this horrendous blight from our land.

May we, like young Emily Mackey who reached out to Norma, reach out to touch the hurting souls all around us. You never know what impact you can make.

Postscript: Norma McCorvey, died at age 69 of heart failure in Katy, Texas. Her book ‘Won by love, I Am Roe’ was on the best seller list for months. And Abby Johnson’s true story Unplanned is a must read to understand the abortion industry. 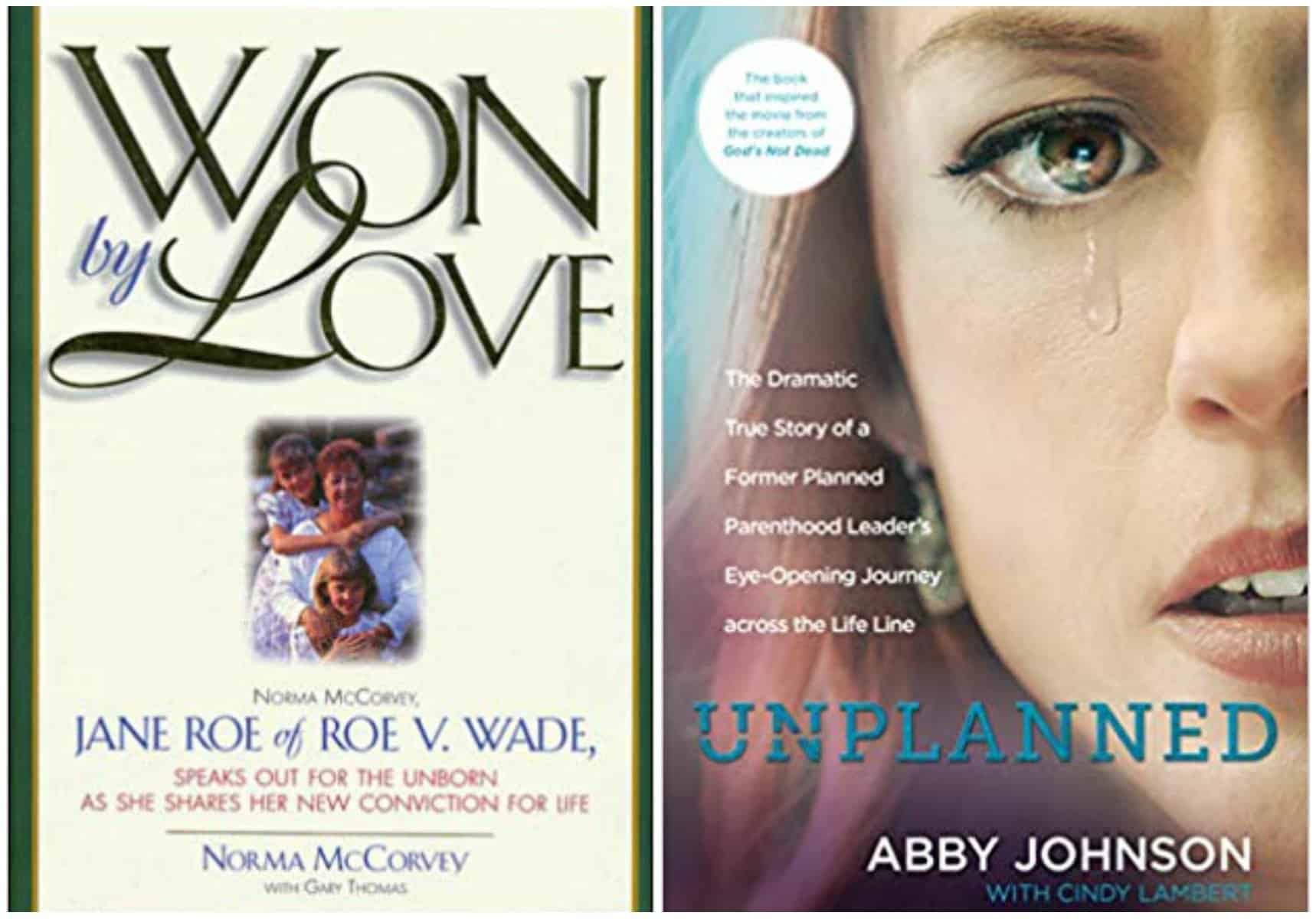 “If my people, who are called by my name, will humble themselves and pray and seek my face and turn from their wicked ways, then I will hear from heaven, and I will forgive their sin and will heal their land.” ~1 Chronicles 7: 14 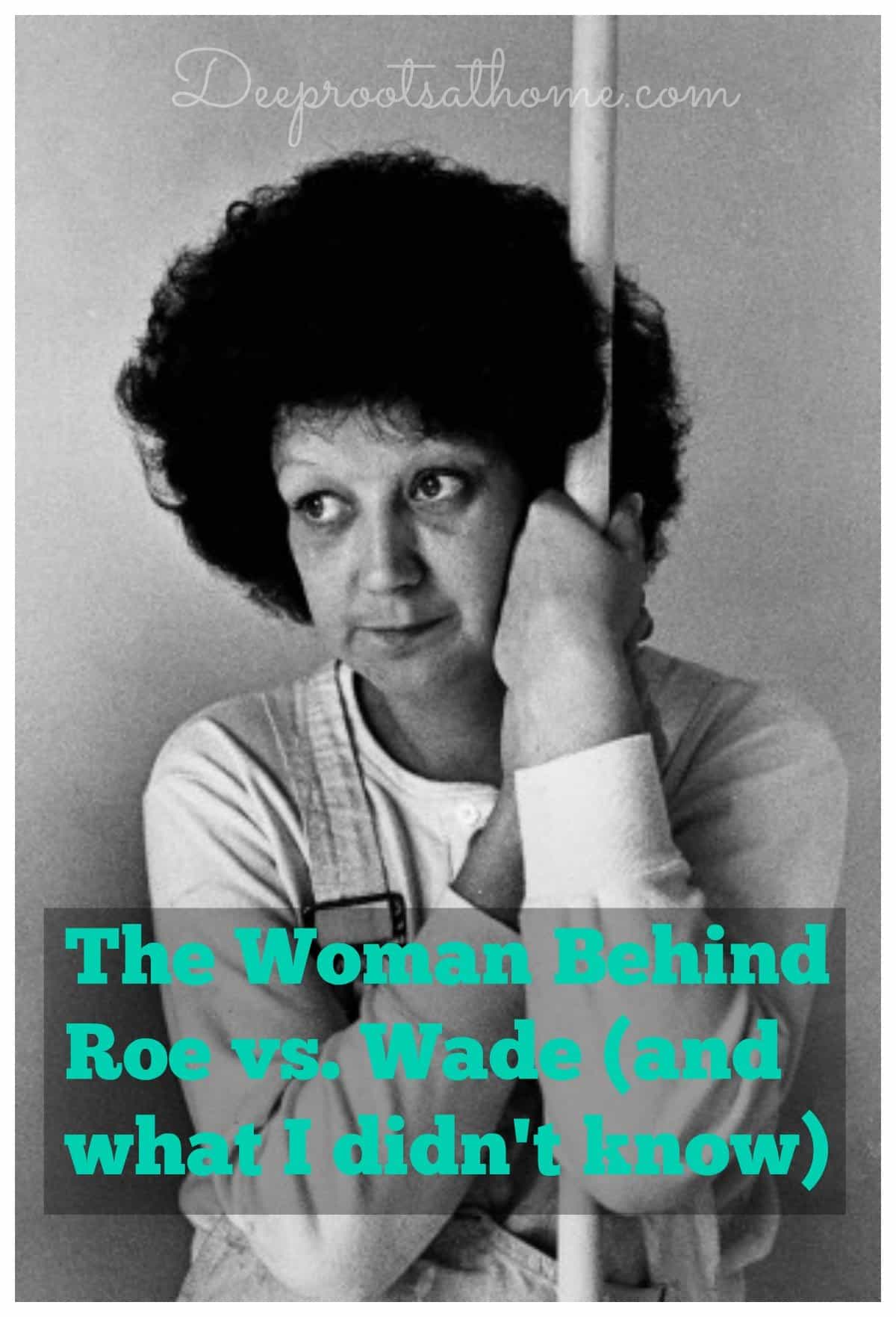