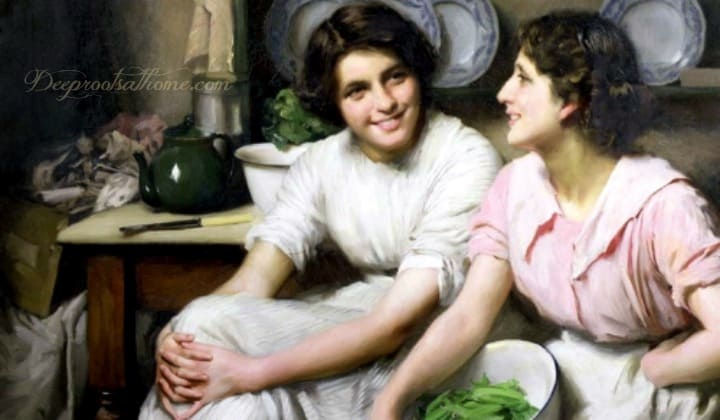 Are any of you older readers longing for the good ol’ days like me – when life seemed simpler to you? Yes, there were very hard and wrong things that happened, but let’s not negate what simple and wholesome good there was, as well, as captured by these paintings.

President Reagan said of America, “it was a tall proud city built on rocks stronger than oceans, wind-swept, God-blessed and teeming with people of all kinds living in harmony and peace, a city with free ports that hummed with commerce and creativity” and a shining beacon of freedom and peace.

My childhood surroundings in the 50s were pretty much like Opie’s in Andy of Mayberry. We were not well-off financially, but we worked hard together and family was very important.

(Generally, in our neck of the woods) a man’s word was his bond (certainly, there were exceptions);

-a handshake was honored;

-neighbors looked out for each other’s children;

-the grocer would keep a tab if you were short;

-schools were opened with the Pledge of Allegiance and a prayer;

-‘Please’ and ‘Thank you’ were expected;

-cost of living was low;

-legal, political, and medical ethics were not perfect, but more the norm;

-and churches and civic groups looked after the poor.

Those of us that have lived our youth in America just 5 or 6 decades ago had a small window to enjoy one of the most freedom-loving times in history.

Today, it is hard to conceive going back to a quieter life because we cannot undo where our world has come (economically, electronically, educationally, and culturally), and for others of you, because you are too young to know what you missed.

But maybe we can pick and choose to intentionally re-create some of the same wholesome ways of the good ol’ days. These are my husband’s memories of his growing up days:

Longing for The Good Ol’ Days

Oh, for the good ol’ days when instead of teachers, it would be older siblings, parents and grandparents…

…instead of a housing development- it would often be a tight-knit community here women and mothers shared how-to tips about child-training, herbal remedies, childbirth, food preservation, gardening, and a shoulder to cry on. 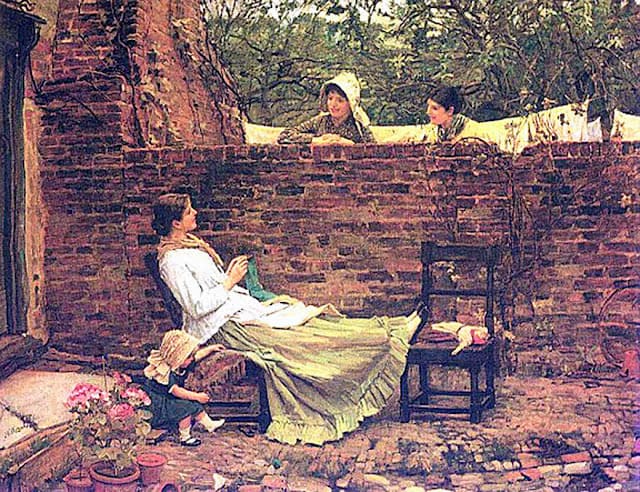 …instead of TV or computer games – free play outside … 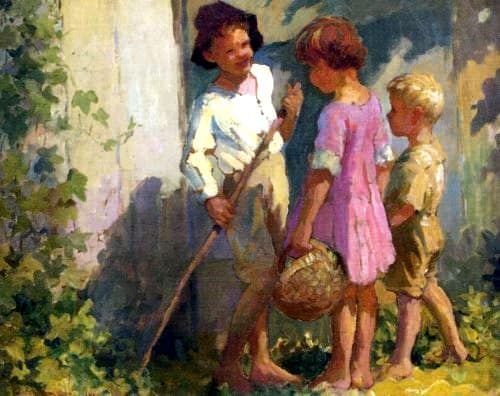 …instead of XBox or a device – creative work with the hands…

…instead of rushing – taking time to dream… 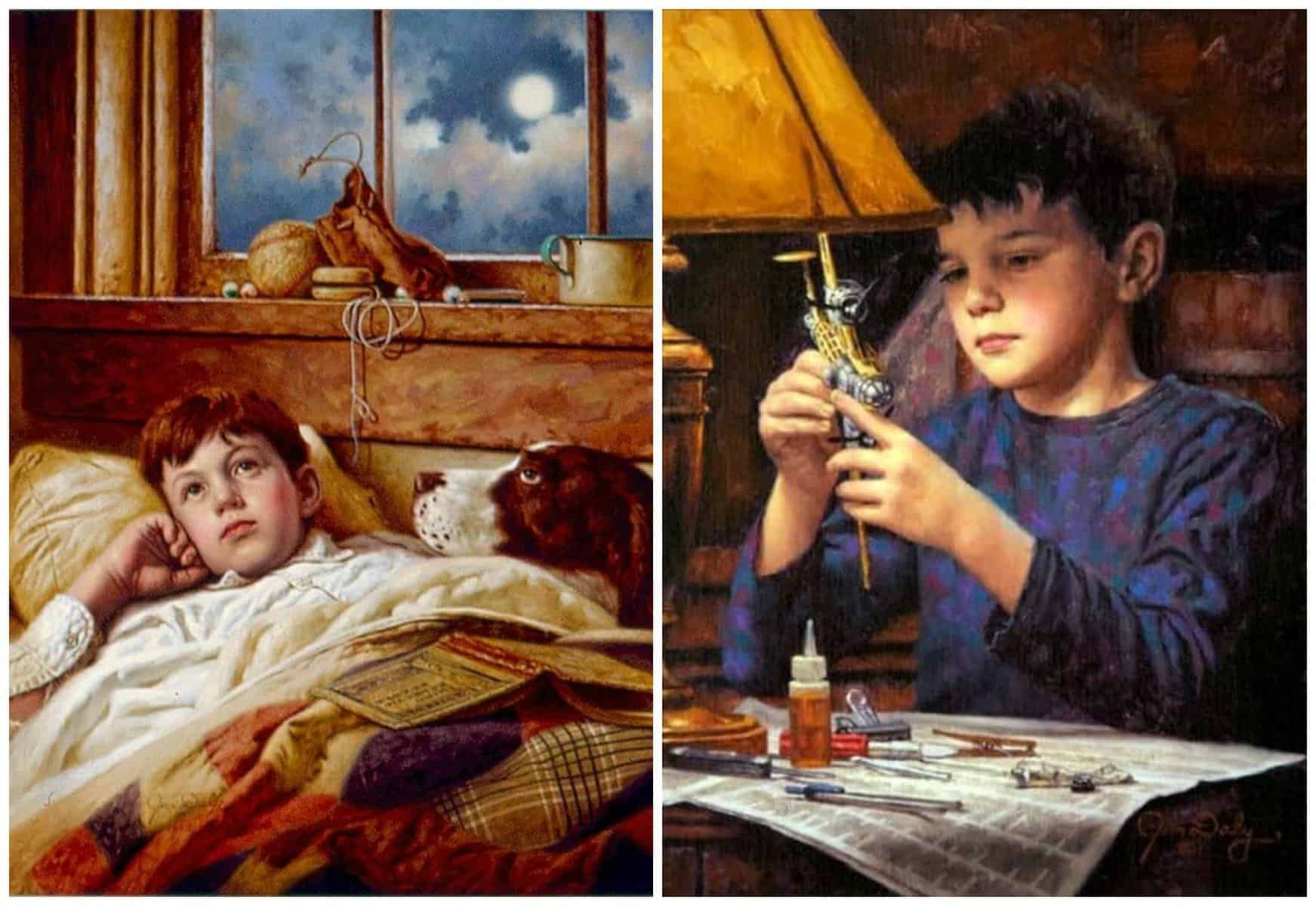 …instead of the nursing home – the family… …instead of bickering at the table – hearts of thanksgiving… 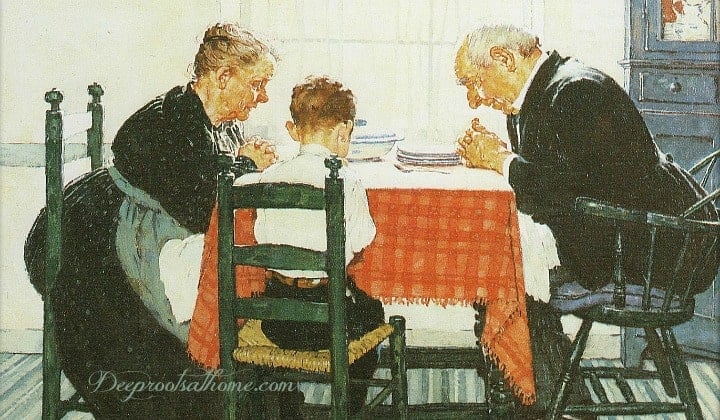 …instead of the supermarket – the garden and kitchen. Work, yes, but many benefits, too. 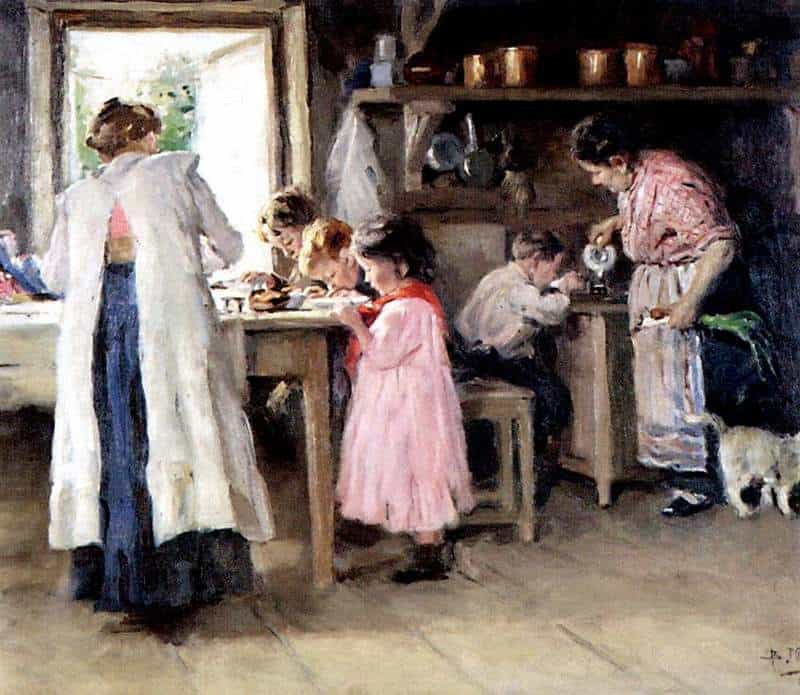 At the kitchen, 1913, by Vladimir Makovsky

…instead of family going different ways in the evening – game night and family devotions. 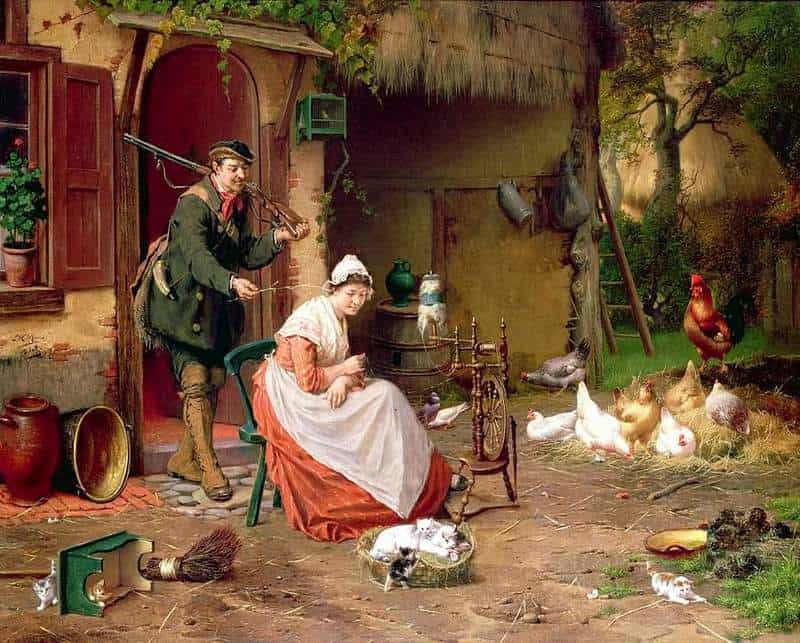 …instead of constant time with childish peers – find time to interact and learn from the older generations. 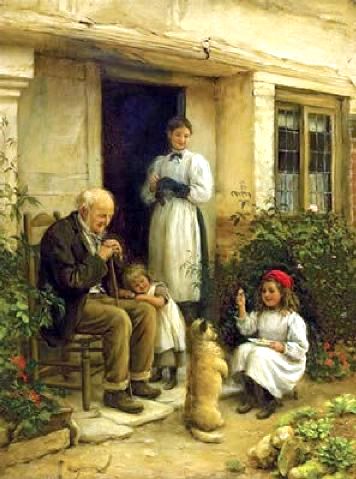 Patience Is a Virtue by Joseph Clark

…instead of going out for dinner most of the time – more meals around the family table.

The family meal table and kitchen are where we civilize our offspring! 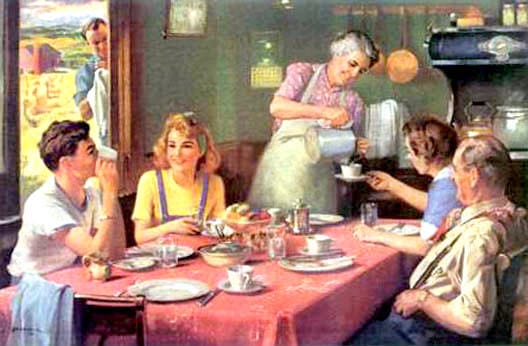 ….instead of social media contacts – face to face interaction with a neighbor. ….instead of spending half your life in the car attending children’s activities- farm life, community, work and fun with other families. ….instead of the movie theater – a read-aloud or movie at home… 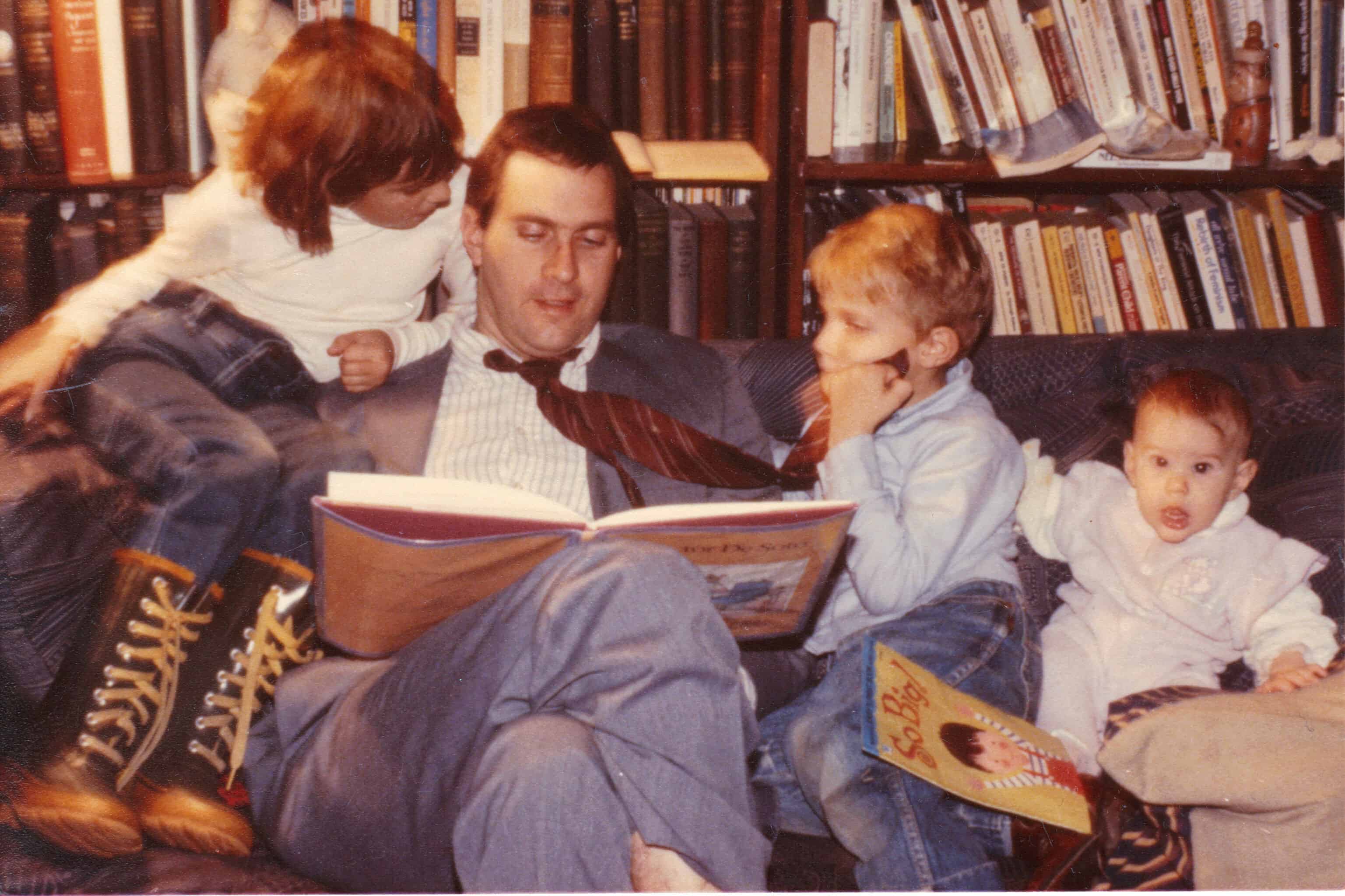 ….instead of a Facebook status- a private letter or card.

….instead of shopping until we drop – creativity, knitting and DIY with our daughters (and sons) (or going to the consignment or thrift stores or garage sales). Keeping a journal, letter writing. Teaching to work with our hands. …instead of a text – a phone call where you can hear their voice. We all hold dear the values that strengthened the family as portrayed in these winsome images. But, we can never go back to the former times (the good ol’ days), as we imagined them to be.

We must look to today and be thankful in all things the Lord has given to us. We must walk wisely and seek guidance to live amidst our increasingly pagan culture.

Questions Every Family Needs To Ask

~Do we need to go to the beaches and public pools? What influence does increasing immodesty have on out sons and daughters?

~Do we need to go to the mall with its materialistic and hedonistic displays? Are there other ways to get lovely clothes and save lots of money, too?

~Do we need to have all the latest and hottest electronics. Are we mindful of how we spend our time? Are we accountable on them?

~Do we run to the newest box office release or cultivate a love for the solitude of reading in the sanctuary of our own home?

~Do we model to our children how to care for us someday by caring for their grandparents now?

~Do we joyfully and thankfully prepare our own food (maybe even grow some of it) in order to take care of the temple that God has given us?

These are my thoughts: We don’t live in the ‘good ‘ol days’ but we can learn from them.

“Be very careful, then, how you live – not as unwise but as wise, making the most of every opportunity, because the days are evil. Therefore do not be foolish, but understand what the Lord’s will is.”  ~Ephesians 5: 15-17

This is not a post to shame or dismiss the horrible events of the past. All through time there has been terror and injustice. In the future, unless mankind can somehow attain to a utopian state, there will always be injustice and hatred until the return of Christ. My thoughts are not meant in any way to say we should go back to poverty and rampant discrimination, but rather to live in the now as God has given us, and to do it with care and wisdom.

The idea of a close family is the nugget I’m elevating, not the evils that were/are present. In 500 words or so I cannot address all of these things. For me, I wish to hold on to the good, avoid causing more evil, and be thankful that the bad of which some of you speak is no longer. I in-no-way wish to go back to ‘the good ol’ days’ ~ that was rather tongue-in-cheek. I had hoped that would come through!

Late added thought: (Generally) hearts were homeward and relationships so often were forged in the trials of those days. Hard work for your own family on your own property is not onerous, but hard work under a dictatorship or in a totalitarian state is grievous! When we start depending on the gov’t for this and that, there are strings attached, and we give up our freedoms little by little – we turn the power over to them instead of to the people.. I would much rather work hard on a small family plot (and fall in bed dog-tired but free) than have someone tell me what to do, and when, tax us over 50% for running a small business (like was our lot for years), tell us where our children should go to school, and teach them things that are contrary to our beliefs, make mandatory laws leaving little room for parental control, etc.

Ease and materialism is often a device of the evil one to distract and divide families. We have fought that trend for years…rather, give us the old paths (Jeremiah 6: 16) and have rest for our souls.

I might refer anyone interested to check out the book ‘How Christianity Changed the World‘ by Alvin Schmidt.