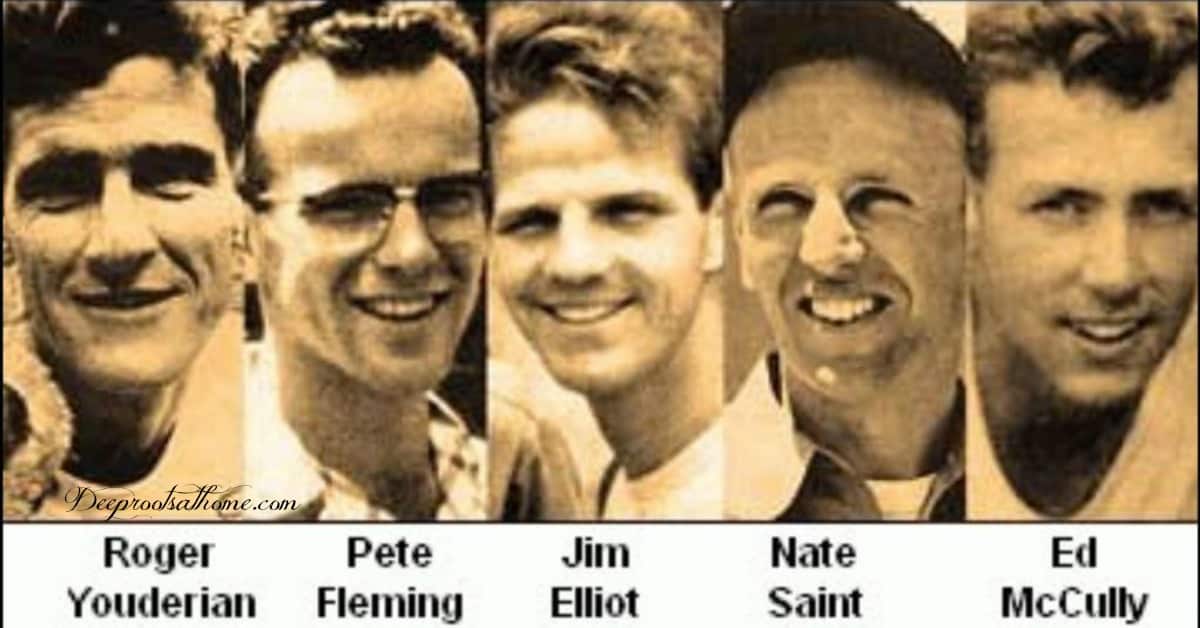 On Oct. 28, 1949, Jim Elliot wrote in his journal a statement of faith that has inspired all who have read it in the decades since: “He is no fool who gives what he cannot keep to gain that which he cannot lose” (The Journals of Jim Elliot).

Seven years later, Jim Elliot and four other missionaries indeed gave their lives in an attempt to share the Gospel with an unreached people group called Aucas in Ecuador.

This indigenous group called themselves “Huaorani,” meaning “people,” but their enemies called them “Aucas” because they were “savages.” They were a tribe of about 600 people known for their violence, not only against their enemies but also among themselves. Any foreigners (cowodi) encroaching upon the Aucas’ territory were killed.

Despite the Aucas’ reputation for violence, five missionary couples felt compassion for them because they had never heard the name of Jesus Christ, the Prince of Peace. They were Jim and Elisabeth Elliot, Nate and Marjorie Saint, Ed and Marilou McCully, Pete and Olive Fleming, and Roger and Barbara Youderian, who, along with their children, moved to Ecuador in order to learn the language and customs of these primitive people and to establish contact with them. Nearby lived Nate’s sister Rachel, who also had a heart for the Aucas.

A breakthrough occurred when an Auca girl, Dayuma, fled from tribal violence and found refuge with Rachel. From Dayuma, the missionaries learned some phrases that they hoped would be helpful in their early contacts. Next, Nate Saint, who was a skilled pilot, discovered the Aucas’ village from the air and, using a megaphone, called out, “We like you. We are your friends.” Nate learned a technique called the “spiral line” by which he circled his plane while lowering a bucket so that he could deliver gifts, such as machetes, axes, pots, and ribbons, to the Aucas. In return, the Aucas began to place into the bucket their own gifts, which included a parrot that became the pet of Nate’s young son, Steve.

Believing that these interactions indicated friendliness, the missionaries decided it was time to make contact.

“Their lives were like bright, short-lived flames,” ~Michael Rusten, The One Year Book of Christian History

New Year’s Day 1956 was the day for the five missionaries to prepare for the upcoming attempt to contact the fierce Auca Indians of Ecuador. Nate Saint, the pilot, was going to fly them to Palm Beach, the nickname for where they had previously exchanged gifts with the primitive Auca tribe from the air.

As the men collected what they would need for their mission, Betty Elliot, Jim’s wife, wondered, Will this be the last time I help him pack?

After breakfast and prayer on the day of their departure, January 3rd, the five men sang one of their favorite hymns:

We rest on thee, our Shield and our Defender,
Thine is the battle, thine will be the praise.
When passing through the gates of pearly splendor
Victors, we rest on thee through endless days.

(to the tune of Be Still My Soul)

A visit and gifts for the Auca Indians

Once on the beach, they built a treehouse for safety and prepared to contact the Aucas. On Friday, January 6th, a visit from an Auca man and two women encouraged the missionaries. They spent several hours together and even gave the man a ride in the plane. 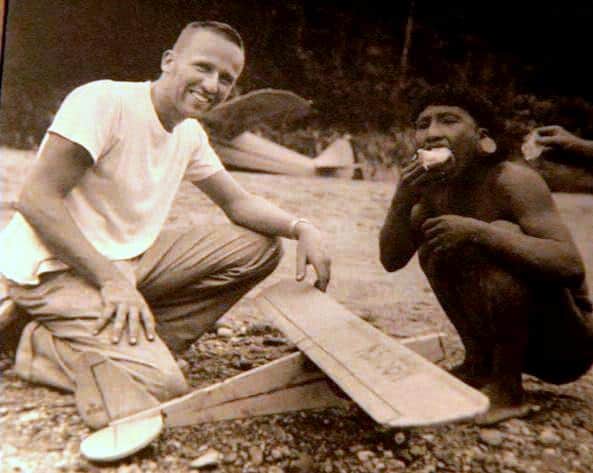 Saturday, no Aucas appeared, but Sunday morning when Nate flew over the site, he spotted some Auca men walking toward their beach. At 12:30 PM Nate made his prearranged radio call to his wife Marj back at the mission station: “Looks like they’ll be here for the early afternoon service. Pray for us! This is the day! Will contact you at 4:30.”

When 4:30 came, the missionary wives switched on their radios.

Five minutes went by and then ten.

Sundown came, and still no word.

Monday morning, January 9th, 1956, Johnny Keenan, another missionary pilot flew to the beach. As Betty Elliot awaited his report, Isaiah 43:2 ran through her mind: “When thou passest through the waters, I will be with thee; and through the rivers they shall not overflow thee.”

She prayed, “Lord, let not the waters overflow.”

At 9:30 AM, the pilot’s report came in. Marj Saint shared it with the other wives: “Johnny has found the plane on the beach. All the fabric is stripped off. There is no sign of the fellows.” 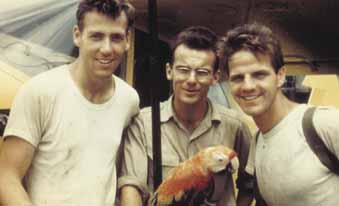 Another pilot immediately contacted Lieutenant General William K. Harrison, commander in chief of the Carribean Command, himself a Christian. Radio station HCJB in Ecuador flashed the news to the rest of the world: “Five men missing in Auca territory.”

By noon a ground party was organized to go to the site.

On Wednesday, Johnny Keenan made his fourth flight over the beach. Marj Saint, who had hardly left her radio since Sunday, called the other wives, and as soon as she was able to speak, she said, “They found one body.” Johnny had seen one body floating face down in the river. 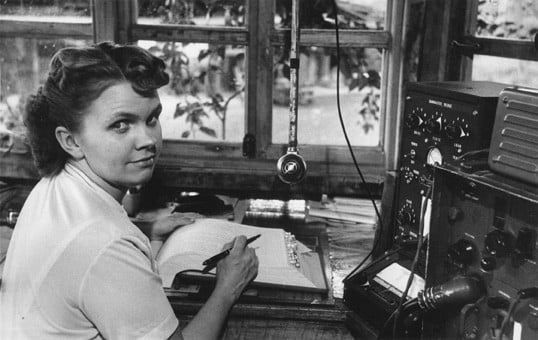 In the afternoon, Johnny radioed in again, “Another body sighted about two hundred feet below Palm Beach.”

The five wives had no idea whose bodies they were.

The search party located four of the five bodies, but Ed McCully’s had been swept away by the river. The other four were buried on Palm Beach.

An actual photo taken by one of the five missionaries.

What happened to the Auca People?

By the end of 1958, Betty Elliot and Rachel Saint, Nate’s Sister, were living among them, and one by one the Auca warriors and wives put their faith in Jesus Christ. 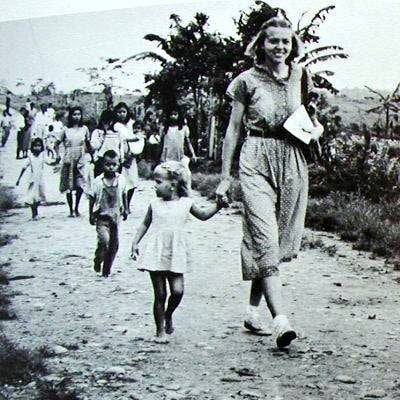 Betty Elliot went back to minister to the very tribe which killed her husband and took their daughter Valerie with her.

The five Auca men who murdered the missionaries became not only Christians but also spiritual leaders among their people. After they believed, they shared how on that fateful day they heard singing from above the trees. Looking up, they saw what appeared to be a canopy of bright lights. God was welcoming his children home.

Nine years later, in June 1965, two of Nate Saint’s children, Kathy and Stephen were baptized at Palm Beach by two of the men who had killed their father.” 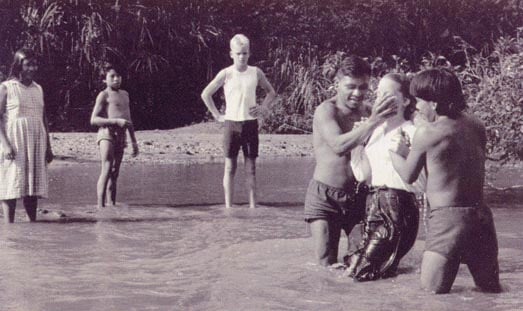 In 1948, Jim Elliot wrote in his journal, “Saturate me with the oil of the Spirit that I may be a flame. But flame is often short-lived. Can thou bear this, my soul?”

Jamie Saint, grandson of Nate, offers a startling analysis: ‘God did not allow those killings to take place. He actually orchestrated them.’

Learn more about the complex tribal politics, only understood years after the fact, that led to the murder of Nate Saint and the 4 others. The missionaries unwittingly became involved in a bloody family vendetta that had been taking place at the time of their arrival. Such killings were not unusual in the Waodani tribe, where there was a 60 per cent homicide rate.

To read more about the ongoing ministry of the Saint family, visit their website here.

All text taken from pages 18 and 19 of E. Michael and Sharon Rusten’s chronicle titled, The One Year Book of Christian History. 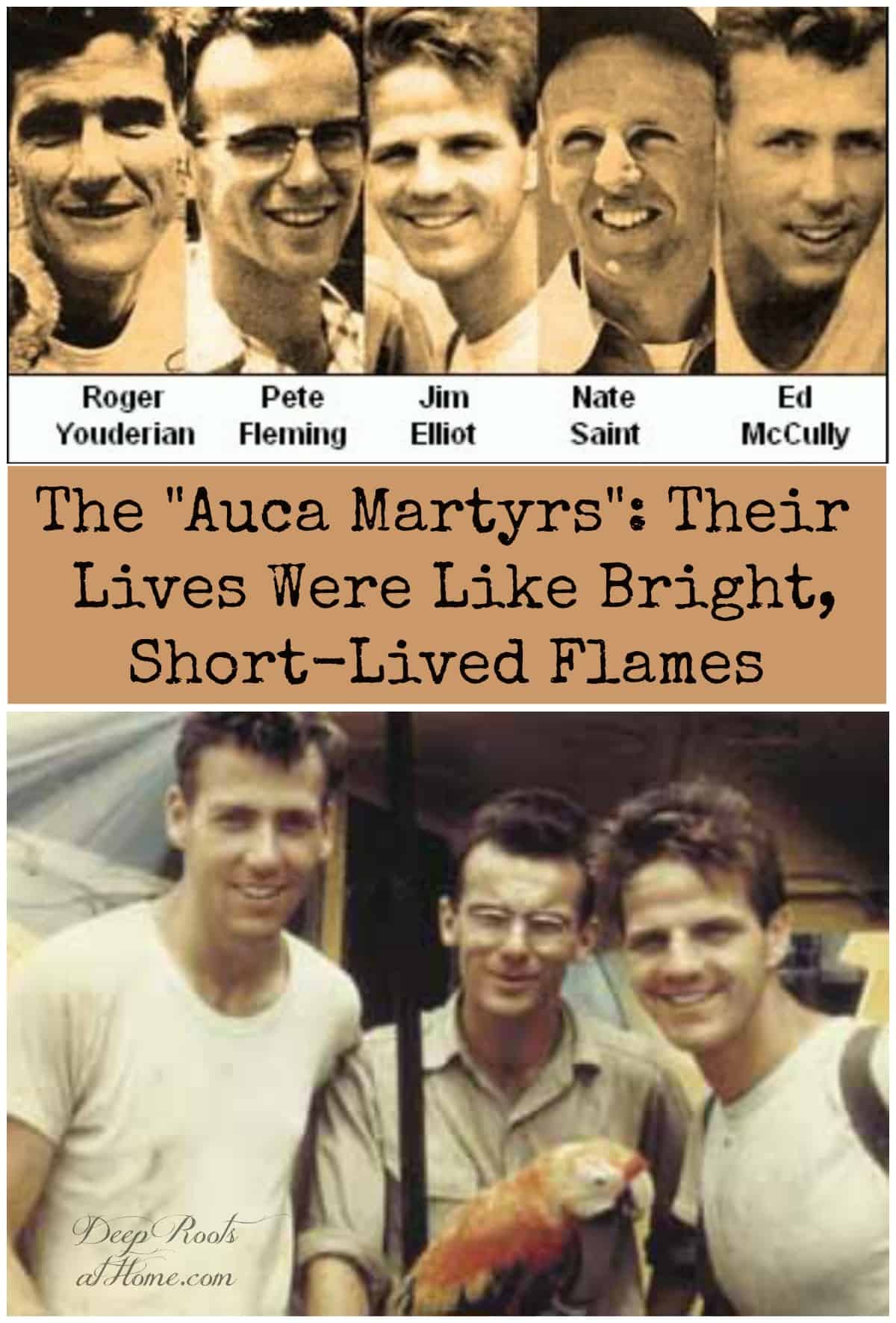 Share93.2K
Telegram
Pin183
93.3K Shares
« The Best Ever Resolution of a Lifetime and It Starts Today!
Longing for The Good Ol’ Days: When Life Was Simpler »