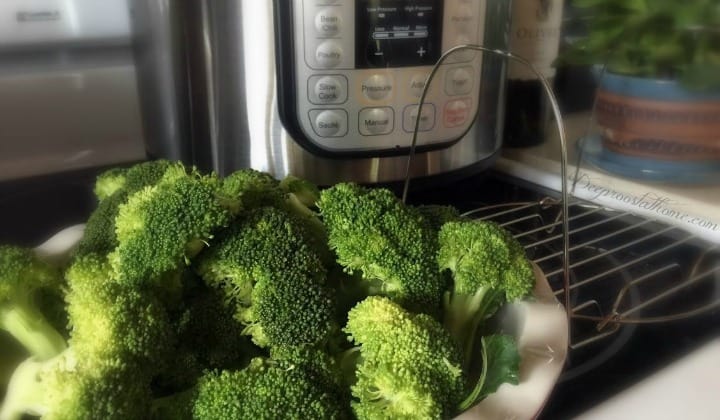 Somewhere along the way, I started thinking/believing pressure cooking harmed our food. I’d heard traditional foodies say, “Pressure cookers cook at super high temperatures when we historically cooked foods slowly over fire. It’s destroys the nutrients.” Because I’ll almost always choose to go with the wisdom of experience when it comes to food and health, this argument made sense.

Then I started hearing from health-conscious food bloggers who used the pressure cooker to make rich broth in a fraction of the cooking time. If pressure cooking is so terrible on nutrients, I had to ask, why then was their broth a perfect, thick jiggly gelatin, a proof-positive sign of its mineral content and collagen goodness?

When I became concerned my ‘made-in-China’ slow cooker could be leaching lead, I started to do my research.

Would you believe it if I told you that there was a way to cook your food with the following results?:

I took this info apart one piece at a time.

When researching, the highest recorded boiling point of water in a pressure cooker I could find was 250 degrees. That is still lower than the temperature that most foods are prepared at in the oven or stove top and about the same as a slow-cooker.

It’s a PRESSURE cooker, not a high heat cooker. You can BOIL water at a low temp if you have high enough pressure. It’s a scientific law.

In other words, a pressure cooking cooks foods at a lower temperature (and definitely in shorter time) than other cooking methods, utilizing the pressure to improve cooking time and efficiency.

A pressure cooker can greatly reduce the time it takes to cook your food. This directly correlates with the loss of fewer heat-sensitive nutrients. 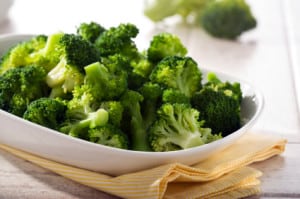 Broccoli cooked in a pressure cooker retains 90% of its vitamin C!

One study, published in the Journal of Food Science, pressure cooking broccoli was found to retain 92% of its vitamin C content, compared to retention rates of 78% and 66% for conventional steaming and boiling, respectively. During pressure cooking, broccoli also retained most of its sulforaphane, which was not the case when the broccoli samples were steamed or boiled using conventional methods. Sulforaphane is the powerful phytochemical that has been linked to many of broccoli’s health benefits, in particular its anti-cancer effects.) (source)

A 1995 study found that there was better retention of Vitamin C (ascorbic acid) and beta-carotene in spinach with pressure cooking than other cooking methods.

The shortened cooking time has another benefit: an increase in the antioxidant capacity of the food. A published study focusing on green peas, chickpeas and lentils found that both conventional boiling and steaming caused significant decreases in total antioxidant capacity, while pressure cooking increased antioxidant values.

Note: You can find conflicting studies that show higher amounts of nutrients were lost with in the pressure cooker, but later research revealed that most of the nutrients were transferred to the cooking liquid. Because of this, I make an effort to use as little cooking liquid as is needed when using a pressure cooker and then re-use the liquid in the meal by making a broth, sauce or gravy of some kind.

Pressure cooking makes legumes and grains more digestible as compared to boiling. It does so by reducing lectins and phytic acid found in grains and legumes. I explained in this post (with a time chart) how reducing phytic acid through soaking makes the nutrients in foods like grains and beans more absorbable and less likely to irritate the digestive system.

Other studies show pressure-cooking increases the digestibility of proteins: mung beans and rice. It makes meat more tender than boiling does (and more tender meat is demonstrably easier for our bodies to digest). (source)

High-temperature cooking of some foods, like potatoes, causes the formation of carcinogenic compounds like acrylamides. These compounds will not form in a pressure cooker. That’s because of all the steam trapped in the cooker. Those compounds mostly form in dry cooking methods like roasting, baking or grilling, or in an ultra high-temp environment like deep frying.

Swiss researchers tested this and found that potatoes cooked at high pressure for 20 minutes had almost no acrylamide formation when compared to other cooking methods.

When a potato (and rice and pasta) is pressure cooked and cooled a large portion of its starch is converted into “resistant starch” – a healthier starch that isn’t fully digested and instead used by the body like fiber – lowering blood cholesterol and fats. See the science here. 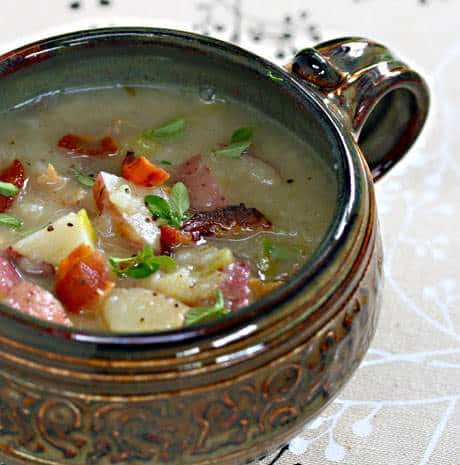 You can cook a whole 5# chicken in 25 minutes (I even browned it with the saute mode)… make super-tender pulled pork or beef in less than 2 hours… make gelatin-rich bone broth in 30 minutes…homemade vegetable soup… cook butternut squash in 10 minutes… as well as broccoli and most other veggies in less than five!

My first meal was a whole FROZEN chicken that turned out fantastic.

I placed it frozen solid on the trivet, set it to Manual, high pressure for 30-50 minutes depending on the size of your chicken. Mine was 4. 2 pounds so I did 40 minutes and it would have been fine with slightly less time. I let steam release naturally.

I finished by browning it with herbs in the oven, but I wouldn’t have needed to to just take the meat! I must say I was afraid at first, but my confidence is building and I love my Instant Pot! 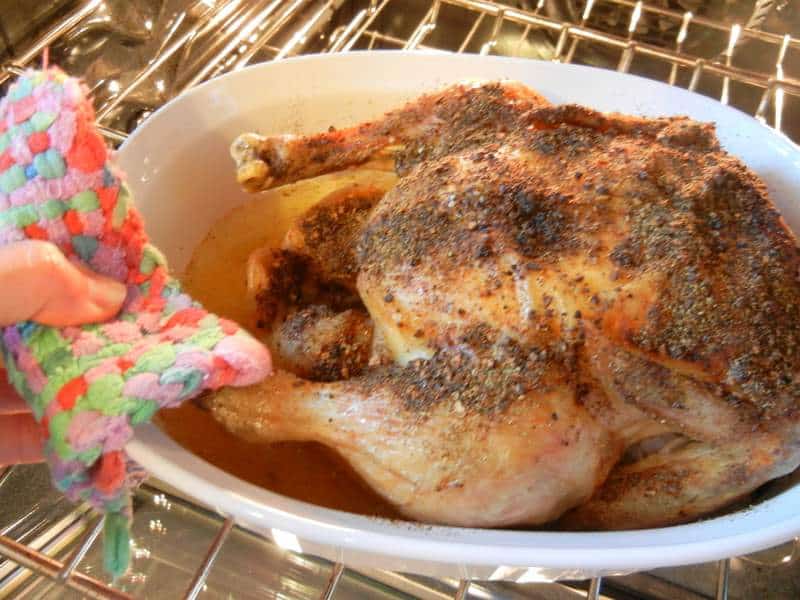 Is There a Downside to Pressure Cooking?

To be fair and balanced, while there are so many positives on the use of a pressure cooker and the science seems solid, some people still choose not to use one. Two concerns are that stainless steel may leach metal with acidic foods and that pressure cooking may increase the glutamine, most particularly in bone broth.

A genuine Instant Pot inner cooking pot is stainless steel food grade 304 (18/8), with no chemical coating, 3-ply bottom for even heat distribution. Having a secondary Instant Pot inner pot (check your size to order) makes it convenient and easy when preparing multiple dishes with your Instant Pot cooker.

Like any method of cooking, pressure cooking does destroy some of the nutrients in food, but it actually preserves more than any other cooking method.

With newer electric pressure cookers (like the Instant Pot), science is clear that pressure cooking is a healthy way to get food on the table for your family more quickly and easily while still preserving the nutrients in your food. 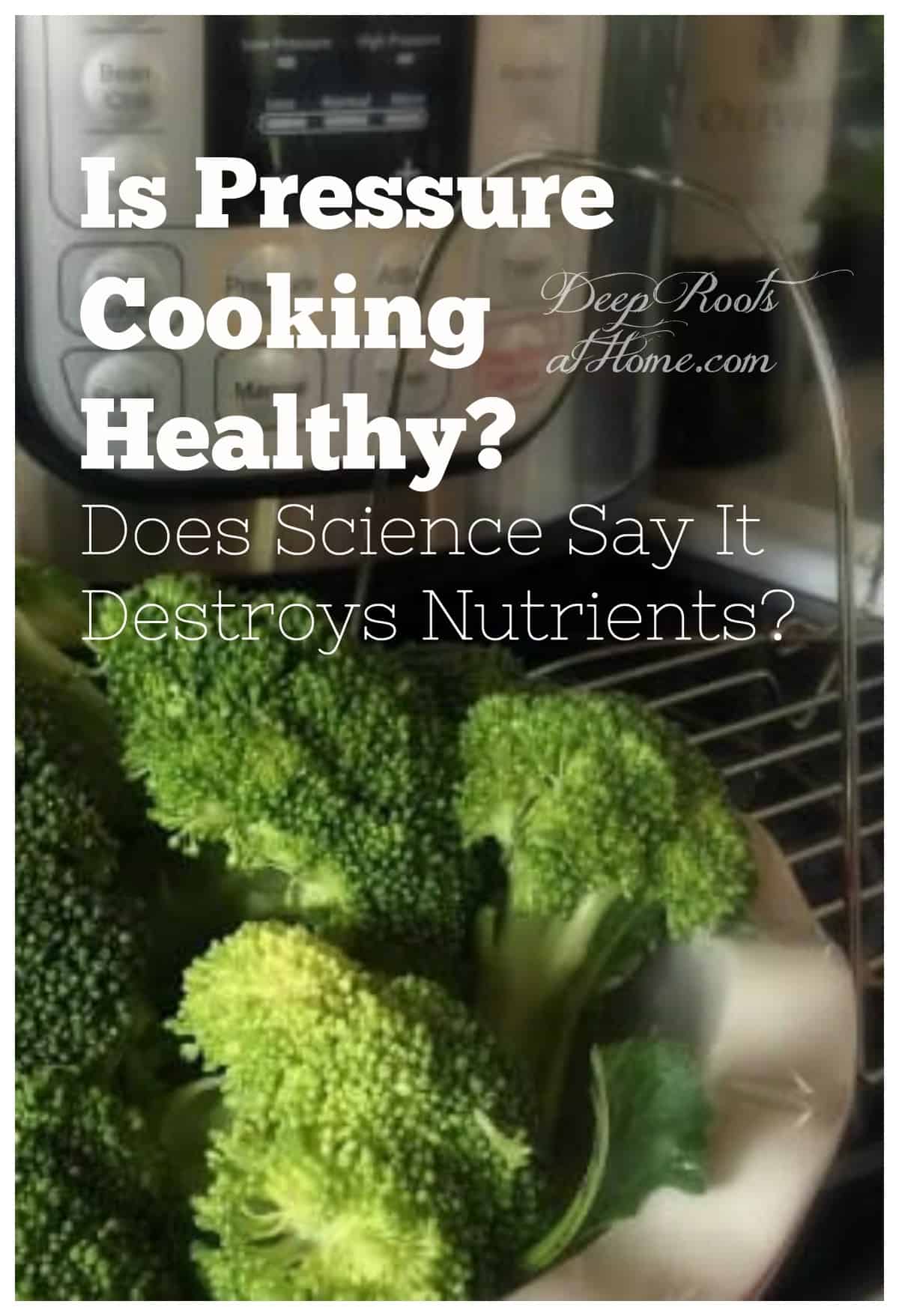