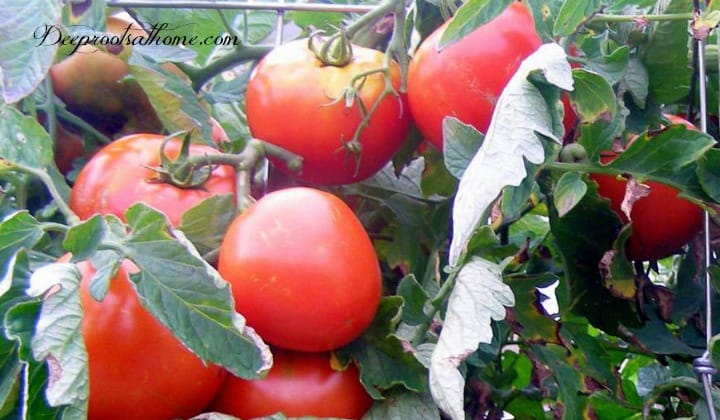 Companion planting is  pretty important to growing the best homegrown garden tomatoes and with many other things, too!  And I will show you why!

When you set a tomato plant in the dirt, gently tamp down the soil around its roots, and water it in, you expect to get a bumper crop of juicy, delicious red fruits. However modern gardeners often overlook time-tested ways to increase yields and create symbiotic relationships in their gardens. Like people thrive with healthy friendships, so it seems do many plants.

In her classic book on companion planting Carrots Love Tomatoes, Louise Riotte has taught generations of gardeners how to use the natural benefits of plants to protect and support each other.

I have read it several times and always learn something new. And now I will share some of the wisdom with you!

Companion planting is thought to work, in part, because it increases plant diversity. Imagine a hungry insect population finding its way into your garden. If it encounters an entire row of its preferred food, you can bet that the entire row will be decimated before you even notice. However, what if that insect population found one plant of its favorite food, only to be halted from moving onto the next one because there’s a plant it doesn’t like in its way? You would probably notice the damage and might be able to control the problem before losing your entire crop.
And, the insects may move on to “greener pastures” if undesirable plants are mixed in with desirable ones.

In its simplest form, companion planting is alternating two types of vegetables in a single row. This is sometimes called intercropping, and alternating garlic or basil with tomato plants is a popular example.

You can also intercrop more than two varieties. A classic multi-species intercropping example is growing onions, lettuce and carrots together. Each of these plants grows its roots at different levels in the soil, so they don’t compete with each other for nutrients. Above ground, these plants have such distinct growth habits and foliage shapes that they don’t crowd each other for sunlight or space.

Bush beans and peas are popular vegetables to intercrop with plants that are heavy nitrogen feeders. This is because beans and peas are nitrogen fixers, meaning they can utilize atmospheric nitrogen for their growth and reproduction. They have symbiotic bacteria that live on their roots and form nodules rich in nitrogen. Plants growing near them will be able to intertwine their roots with the beans’ roots and utilize the nitrogen stored there. (source)

An ancient and popular companion planting is the Three Sisters garden. The Three Sisters method is a unique Native American way of growing corn, pole bean, and squash. These three plants mutually benefit each other as they grow. The corn provides a living trellis for the pole beans, the pole beans provide nitrogen for use by the corn, and the squash provides living mulch. The three plants create a synergy that produces a greater yield, increased nutrition and more food calories than if only one of the crops was grown alone in the same space. The Anasazi added another sister, flowering bee plant, Cleome serrulata, to the plant mix to improve pollination of the beans and squash and provide pollen to the bees. (source)

Companion Gardening at a Glance

This is a page from Louise Riotte’s book that gave me lots of ideas for approximately how far to space things that were and were not compatible. Such a wonderful potager (kitchen garden); I can just imagine walking through it in my mind. 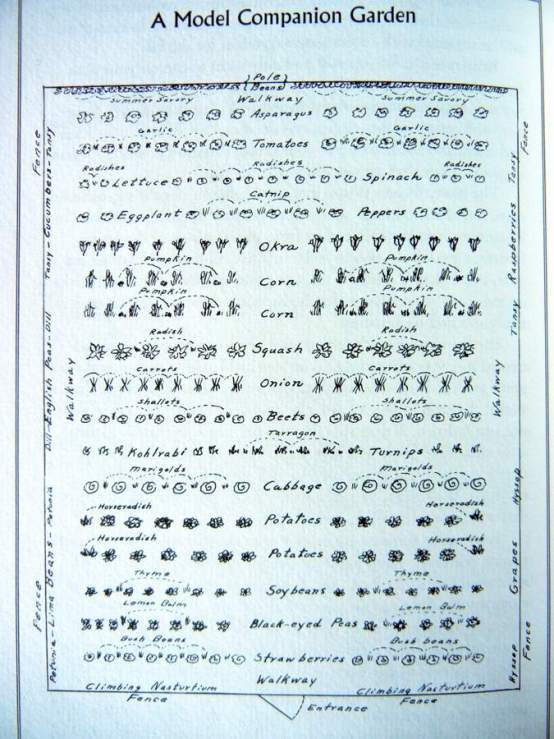 Tomatoes have a whole group of other plants they are friends with.

What to Companion Plant Near Tomatoes:

Chives, Onions, and Garlic~ Members of the onion family are great companions and beneficial to plant with many types of crops due to the pungent odor they emit. This helps deter many insect pests.

Peppers (sweet and hot) are in the same family (nightshade) as tomatoes and are compatible companions.

Marigold help deter harmful nematodes from attacking tomatoes. The pungent odor can also help confuse other insect pests. To deter nematodes, the best practice is to grow the marigolds, then chop and till them into the soil at the end of the season.

Carrots companion well with tomatoes because they share space well. The carrots can be planted when the tomatoes are still quite small, and can be happily growing and ready to harvest by the time the tomato plants start to take over the space.

Basil: Growing tomatoes and basil together increases the vigor and flavor of both crops.

Spinach, Lettuce, Arugula: These are also helpful crops for tomatoes. They stay fairly small, and will grow better in the heat of summer when shaded by the growing tomato plants. Although I have not read it anywhere until recently, I always have had good success planting lettuce (Romaine, particularly) in the shade at the side of tomatoes as seen below. Both benefit nicely. 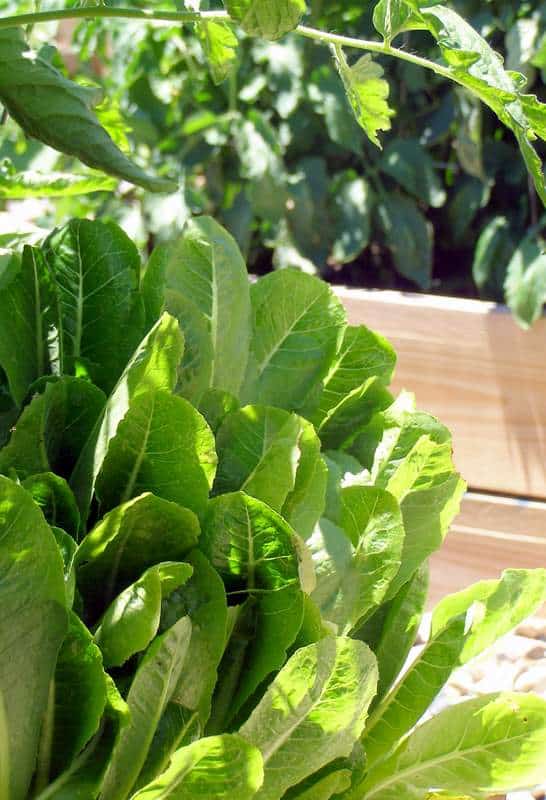 What Not to Plant with Tomatoes:

Plant in same place or a new place??

There are so many wonderful tomato varieties to try and a taste to suit every palate, especially in heirloom tomatoes. I hope you find this helpful in growing the best tomatoes ever. And every year you will get better and better at it. Have fun as a family and grow your own tomatoes.

Store-bought tomatoes can never compare to ones you grow yourself!

“The federal government has sponsored research that has produced a tomato that is perfect in every respect, except that you can’t eat it. We should make every effort to make sure this disease, often referred to as ‘progress’, doesn’t spread.” ~Andy Rooney 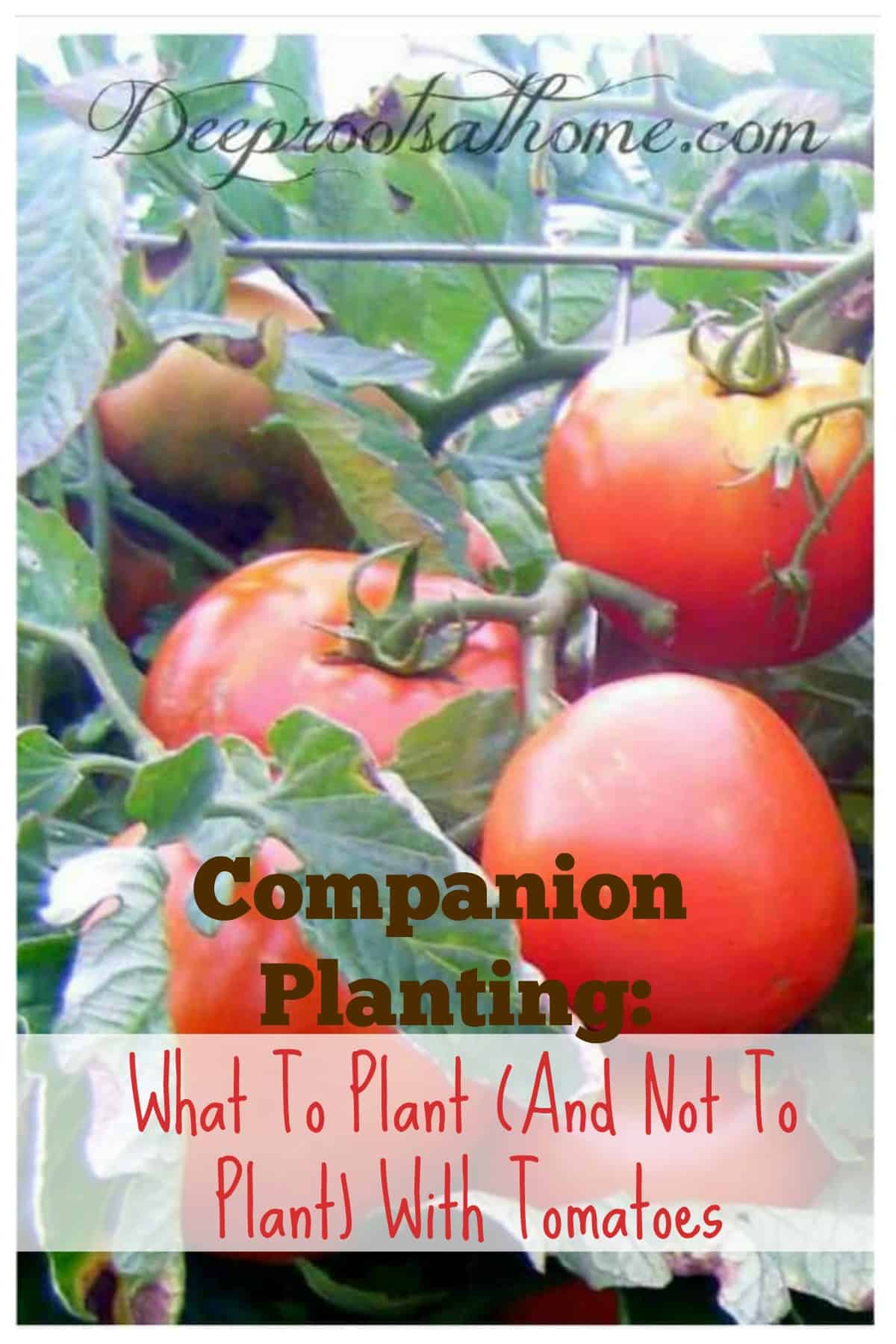