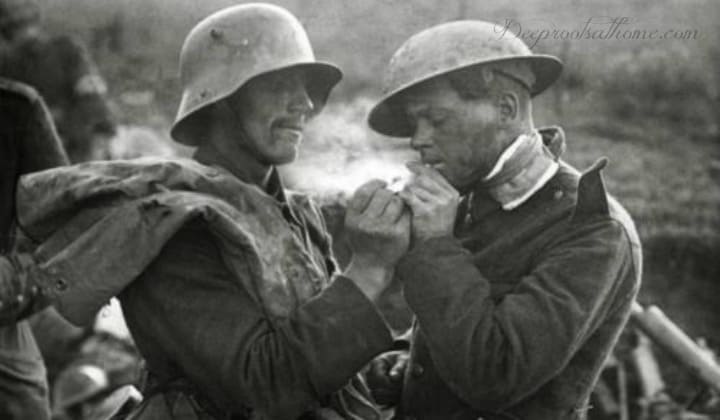 You likely have already heard and seen this breathtaking video. If not, I humbly post it here in hopes that it will ignite a fire in your breast to lay down your own personal agenda whenever it undermines peace between you and another.

History is an excellent teacher.

(And find the 2002 Christmas movie (a beautiful version) link below)!

The Christmas Truce on the Western Front in France in the first year of World War I is an enduring image of the triumph of man’s spirit over hate and adversity.

What really happened in no man’s land between British and German infantry in December 1914?

“The assassination of Archduke Franz Ferdinand, heir to the Austrian throne and his wife in Sarajevo, on June 29, 1914, sparked a rapid sequence of events which led to the outbreak of World War I.

In early August, Germany swept past Luxembourg and Belgium on their way into France and at first made rapid progress. Enemies, the Allies and Germans tried a series of outflanking movements which eventually led to a battle line – the Western Front – stretching from Lorraine in the south to the English Channel in the north.

Soldiers dug trenches and erected barbed wire to hold their positions: the nightmare that was to become ‘trench warfare’ had begun.

In places the trenches were just yards apart and, as the soldiers realized that neither side was going to make any rapid victories or progress, the trenches became more fortified.

The opposing forces now had time to regroup and strengthen their lines with more men but it soon became apparent to the Generals and to the men on the front line that this was going to be a war of attrition – the only way a ‘winner’ would be decided would be when one side ran out of men or out of bullets.

As Private R. Fleming of the 2nd Durham Light Infantry put it: “It is not war, this. It is who can kill the most in the shortest possible time” ( The Newcastle Evening Mail January 13, 1915).” (source) 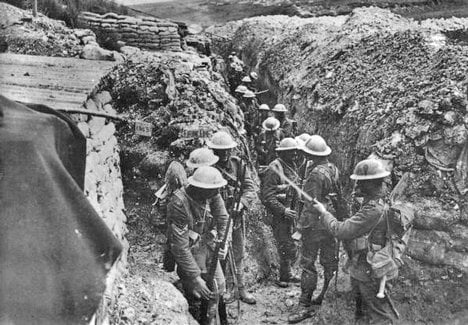 “The proximity of the enemies also allowed men to shout out to their opponents or stick up signs on wooden boards. After a particularly heavy barrage of missiles or bullets, the soldiers might shout out “Missed” or “Left a bit”. (1)

“This black humor was to be the start of a ‘conversation’ between troops that would hasten the onset of a Christmas truce.

“For much of December, it had been wet but on Christmas Eve the temperature dropped and a sharp frost enveloped the landscape. A ‘white Christmas’ would provide the backdrop to one of the most remarkable Christmas stories in 2,000 years.

“The shouting between troops turned into something more during Christmas Eve.

“Germans celebrate Christmas on December 24 – more than they do on the day itself (in Britain and France, December 25 is the main day of celebration).

“So on the Western Front on Christmas Eve, German soldiers began to sing carols and place Christmas trees lit with lanterns above the trenches.

As a subaltern told the Press Association: “Their trenches were a blaze of Christmas trees, and our sentries were regaled for hours with the traditional Christmas songs of the Fatherland. Their officers even expressed annoyance the next day that some of these trees had been fired on, insisting that they were part almost of the sacred rite.” (source) 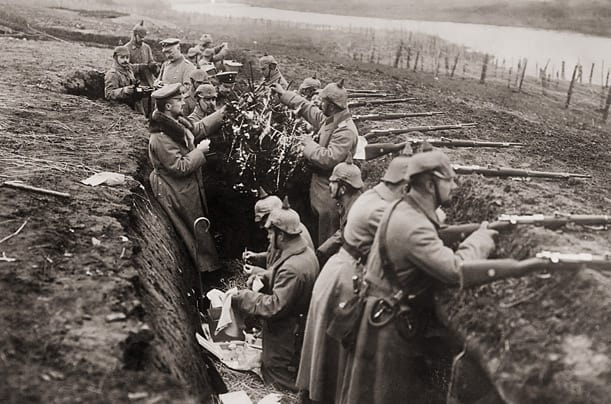 German troops decorate a Christmas tree inside their trench.

A ‘white Christmas’, singing of carols, shouts of good wishes across the trenches and the erection of illuminated decorations: A truce which days earlier had seemed inconceivable was now all but inevitable. 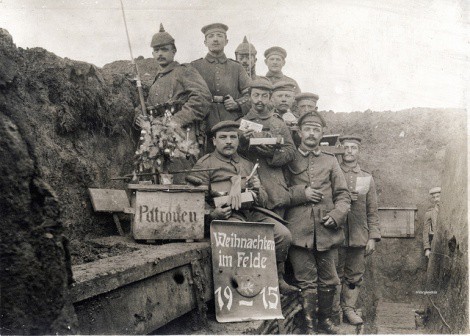 German troops pose for a picture and prepare to (hopefully) welcome in 1915.

It is not hard to understand how singing and shouting between trenches on Christmas Eve escalated into something more.

This letter, for example, was one of hundreds sent home by the soldiers on the front and shared by excited families with their communities through the local newspapers.

Censorship appears to have been in its infancy.

“As I told you before our trenches are only 30 or 40 yards away from the Germans. This led to an exciting incident the other day. Our fellows have been in the habit of shouting across to the enemy and we used to get answers from them.

We were told to get into conversation with them and this is what happened:-
From out trenches: “Good morning Fritz.” (No answer).
“Good morning Fritz.” (Still no answer).
“GOOD MORNING FRITZ.”
From German trenches: “Good morning.”
From our trench: “How are you?”
“All right.”
“Come over here, Fritz.”
“No. If I come I get shot.”
“No you won’t. Come on.”
“No fear.”
“Come and get some fags, Fritz.”
“No. You come half way and I meet you.”
“All right.”

One of our fellows thereupon stuffed his pocket with cigarettes and got over the trench.. The German got over his trench, and right enough they met half way and shook hands, Fitz taking the fags and giving cheese in exchange.”
Letter from Private H Scrutton, Essex Regiment, published in the Norfolk Chronicle on January 1, 1915″ (source) 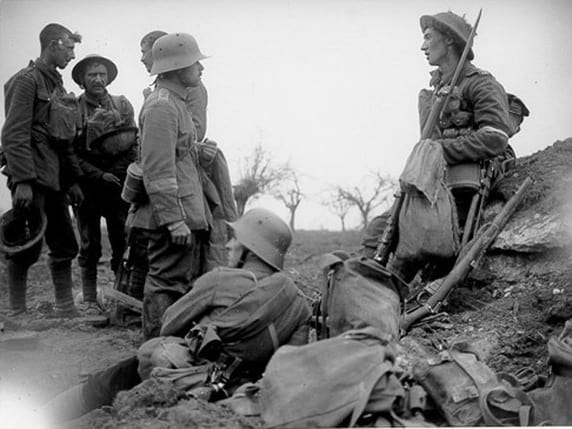 Conversation between English and German soldiers.

First, it should be remembered that while the Christmas Truce was widespread it was not total.

In some parts shelling and firing continued during the day; there were deaths on Christmas Day, 1914. Pat Collard, for instance, wrote to his parents at The Chestnut Horse pub describing a horrendous Christmas under fire, concluding: “Perhaps you read of the conversation on Christmas Day between us and the Germans. It’s all lies. The sniping went on just the same; in fact, our captain was wounded, so don’t believe what you see in the papers.” (Hampshire Chronicle, January 1915). (source)

But despite Pat Collard’s experience, there were indeed many truces along the Western Front that Christmas.

This letter from Private Cunningham, of the 5th Scottish Rifles reveals in more detail how such truces came about:

“On Christmas Eve the firing practically ceased. I think both sides understood we were going to have a day off. Through the night we sang carols to one another, the German lines were only a hundred yards away, so we heard each other quite plainly. This went on all night.

When dawn arrived we started putting our head above the parapet and waved to each other. On our left was a brewery occupied by the Germans and to our surprise we saw a German come out and hold his hand up, behind him were two rolling a barrel of beer. They came halfway across and signed to us to come for it.

Three of us went out, shook hands with them, wished them a merry Christmas, and rolled the barrel to our own trenches amid the cheers of both British and Germans!

After that it was understood that peace was declared for a day. We both got out of our trenches and met in the middle of the field, wished each other seasons greetings.

The Germans said: “A merry Grismas!” Some of them were quite good at English. We had a most interesting day.

The Germans got permission for our officers to bury some of their dead which were lying near our lines. ” (The Scotsman, January 5, 1915). (source) 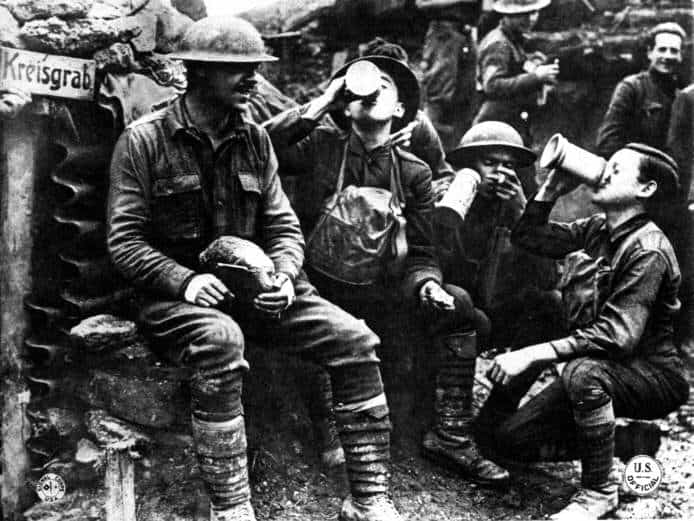 The End of the Truce

“If initiating a Christmas Truce in the middle of war-torn France seemed impossible, then ending it was to prove even harder. Soldiers seemed reluctant to begin shooting at the very people they had been sharing jokes with just a few hours earlier.

“Company-Sergeant Major Frank Naden of the 6th Cheshire Territorials: “Next day we got an order that all communication and friendly intercourse with the enemey must cease but we did not fire at all that day, and the Germans did not fire at us.” (Evening Mail (Newcastle) January 31, 1914)” (source)

“And the Manchester Guardian’s Paris Correspondent wrote: “The sequel was more interesting than the event of the Christmas Truce itself.

The French and German soldiers who had thus fraternized subsequently refused to fire on one another and had to be removed from the trenches and replaced by other men.”

“It was then we discovered that those on the ‘other’ side were not the savage barbarians we’d been told,” Alfred Anderson, the last surviving British soldier to take part in the Christmas truce, told George Beres for the History News Network.

“They were like us. Why were we led to believe otherwise?” 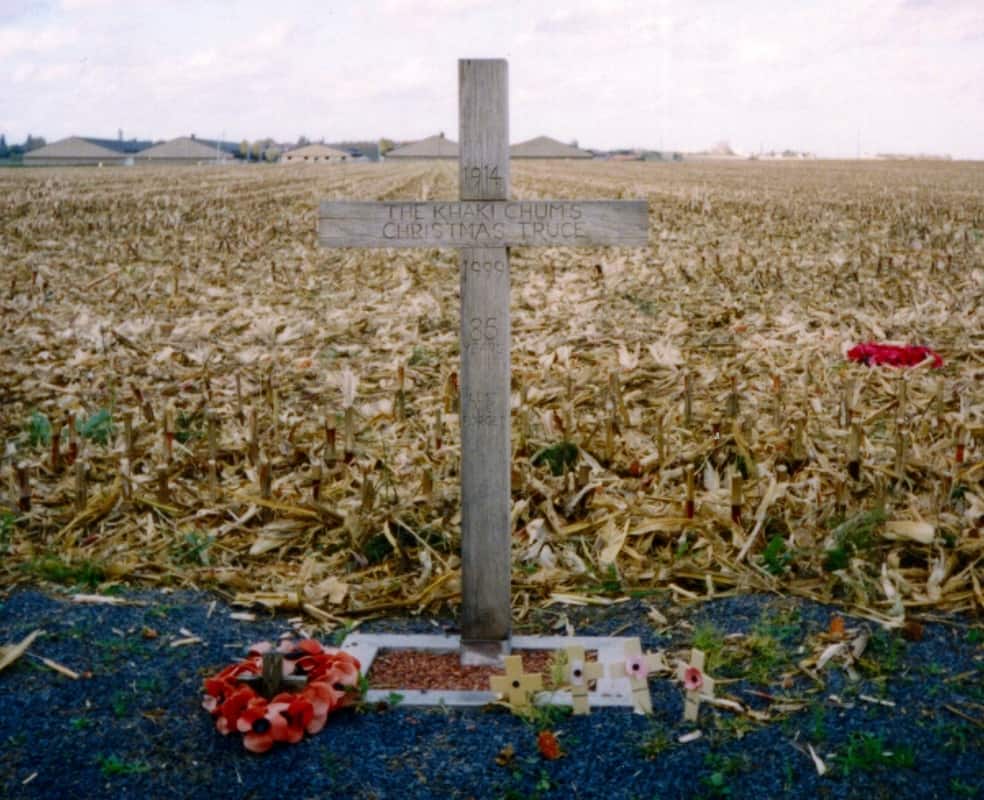 The all too short Christmas Truce of 1914 was a celebration of human solidarity and fraternity amidst the unimaginable pain and suffering of the Great War.

It was an initiative of the soldiers on both sides against its political and military leaders.

Indeed, the spirit of Christmas prevailed in December, 1914.

But I say unto you, “Love your enemies, bless them that curse you, do good to them that hate you, and pray for them which despitefully use you, and persecute you…” ~Jesus in Matthew 5:44 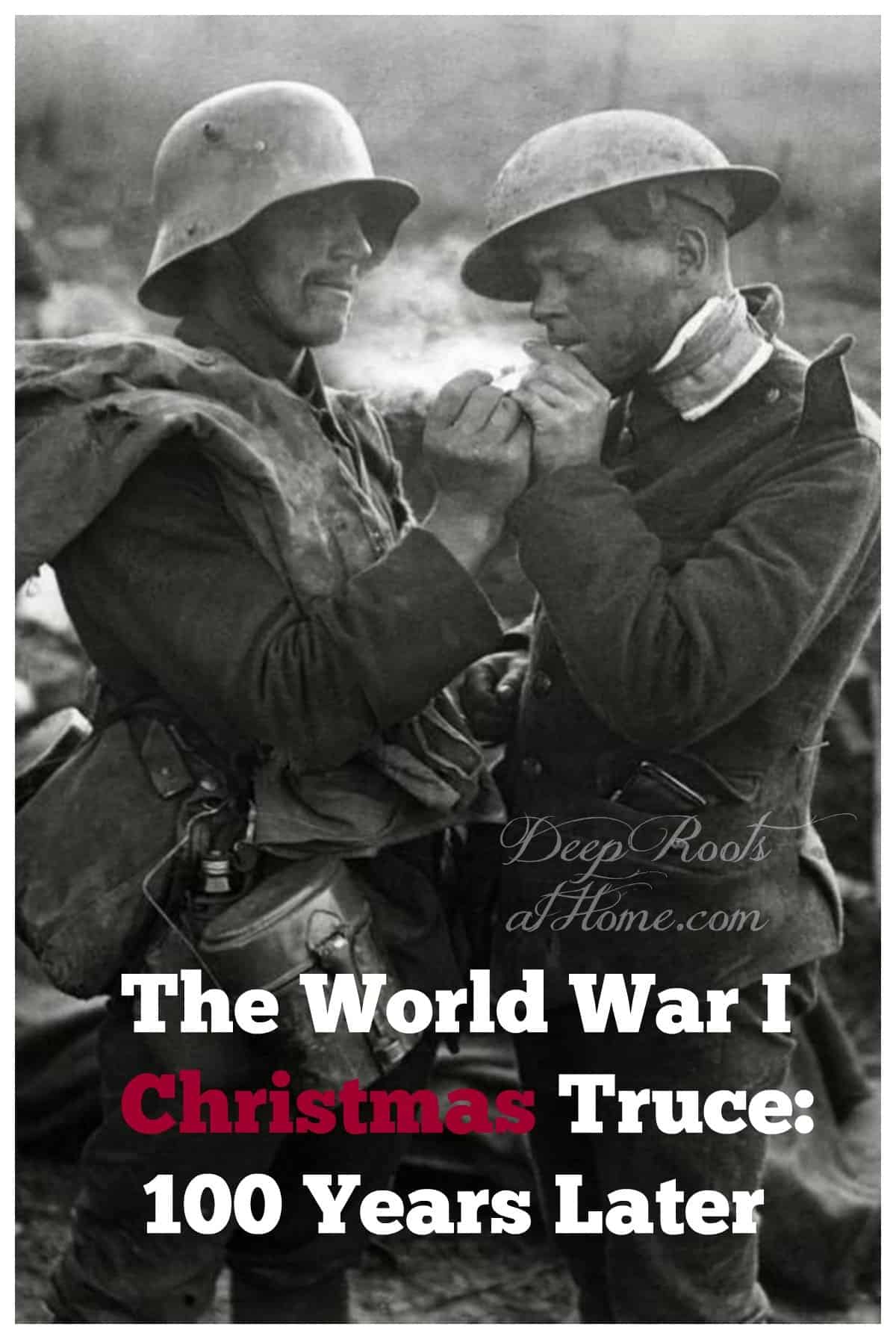