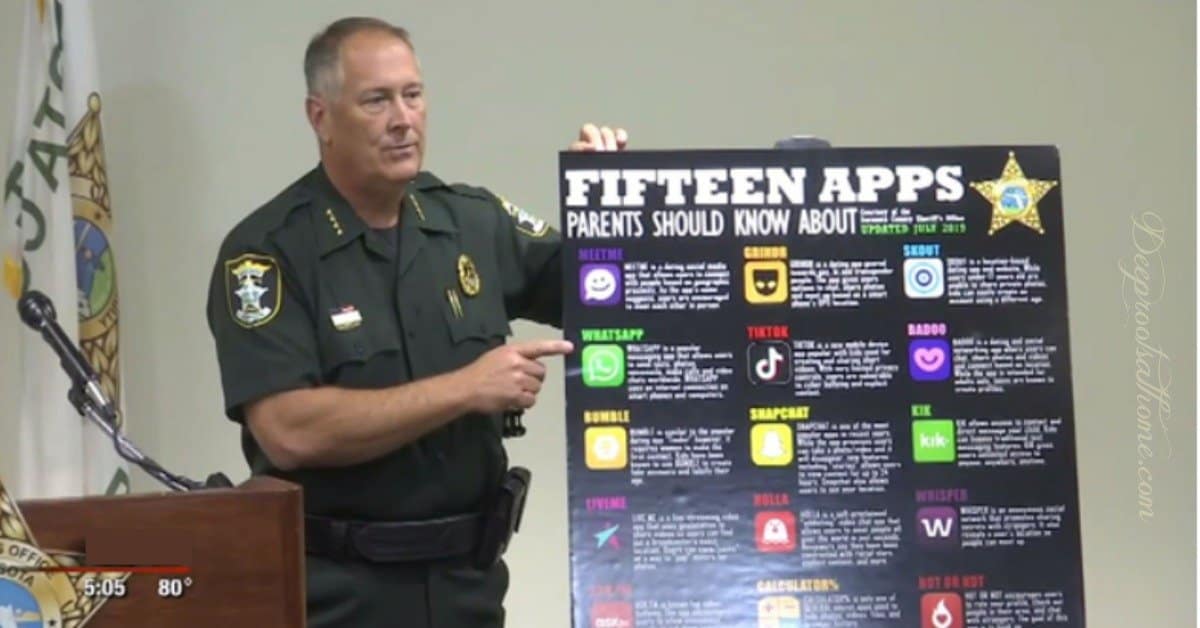 The Sarasota County Sheriff’s Office made headlines last May (2018) when they released a graphic with 9 apps that could put children at risk of being targeted by predators.  #NineAppsParentsShouldKnowAbout.

Now the sheriff’s office has added 6 more apps parents should watch out for on their kids’ phones. They are used to groom children by opportunistic as well as premeditated perpetrators and sexual offenders.

Following a recent bust of 25 suspected child predators and human traffickers, Sheriff Tom Knight said social media has made it easier than ever for predators to connect with children. He said that means parents have to be more vigilant about what their kids are doing online and on their phones. #OperationInterceptVI

Please resist the urge to feel fearful reading this, but rather remember that information of this sort is your friend. At the end I share 2 parenting strategies!

These additional six apps were all used by our suspects to prey on children. Please SHARE this post and have those tough conversations with your kids. One day they will thank you. #FifteenAppsParentsShouldKnowAbout

“Know what’s on your child’s phone, have the courage to challenge your child,” Knight said.

The Sheriff’s Office named 15 apps parents should look for:

– Meetme: It’s a dating social media app that allows users to connect with people based on geographic proximity. The app’s users are encouraged to meet each other in person.

– Grindr: This dating app is geared toward gay, bi and transgender people. It gives users options to chat, share photos and meet up based on a smart phone’s GPS.

– Skout: It’s a location-based dating app. While users under 17 years old are unable to share private photos, kids can easily create an account with an older age.

– Whatsapp: This is a popular messaging app that allows users to send texts, photos, voicemails, as well as make calls and video chats.

– Tiktok: High security risk from Chinese company intent on gaining information.  Popular with kids, it’s used for creating and sharing short videos. With very limited or NO privacy controls, users are vulnerable to cyber bullying and explicit content or worse.

– Badoo: This is a dating and social networking app where users can chat, share photos and videos based on location. The app is intended for adults only, but teens are known to create profiles.

– Bumble: It’s similar to the popular dating app, Tinder, however, it requires women to make the first contact. Kids have been known to use Bumble to create fake accounts and falsify their age.

– Snapchat: It’s one of the most popular apps of 2018. While the app promises users can send a photo or video and it will disappear, recent features allow users to view content for up to 24 hours. Snapchat also allows users to see your location.

– LiveMe: This live-streaming video app uses geolocation to share videos so users can find out a broadcaster’s exact location. Users can earn coins within the app and use them as a way to pay minors for photos.

– Holla: The app’s makers admit it’s an “addicting” video chat app. It allows users to meet people all over the world in just seconds. Reviewers say they have been confronted with racial slurs, explicit content, and more.

– Whisper: This is an anonymous social network that promotes sharing secrets with strangers. It also reveals a user’s location so people can meet up.

– Ask.fm: This app has become known for cyberbullying. The app encourages users to allow people to anonymously ask them questions.

– Calculator%: This is one of several secret apps used to hide photos, videos, files, and browser history.

– Hot or Not: This app encourages users to rate other users’ profiles, with the focus on physical appearance. It also allows users to check out people in their area and chat with strangers. The sheriff says the goal of this app is to “hook up.” 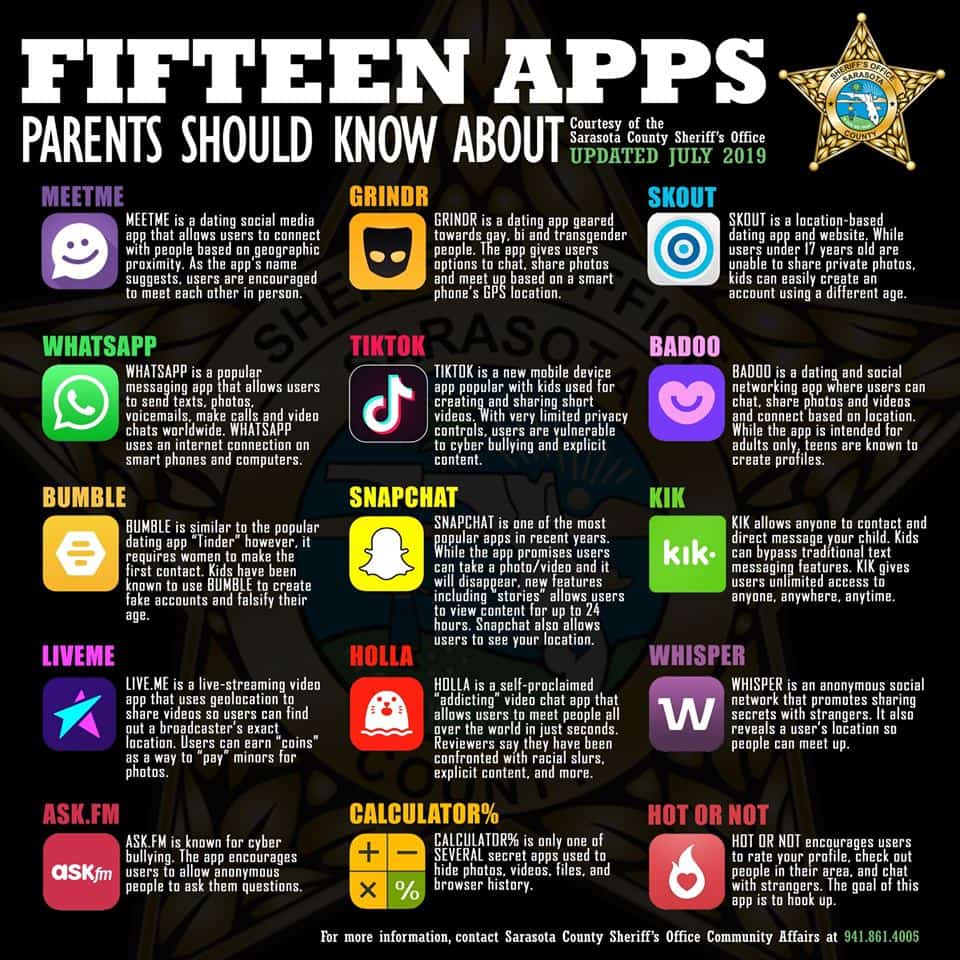 – Hip: You know the old saying “don’t judge a book by its cover?” That is the case for Hide it Pro (HIP), an app disguised as a music manager, but really it’s meant for hiding anything from photos and videos to text messages and other apps. The name is pretty straightforward in the app store, but on your screen it simplifies to HIP to add to the clever mask. (source)

– Omegle: Omegle is not an app, but it may be the most concerning to parents. Simply type omegle.com into any browser, and you can be connected via chat or video to a stranger.

– Talking Angela and Talking Tom they are apps that appear as cats. One person said there was a man seen in the pupil of the cat’s eye looking at you!

Nathan Emery, an agent with the Department of Homeland Security, said the apps all give easy access to children — which make them a prime target for predators.

“It’s that unfettered access to kids that brings more people in because they can sort of play out their deviance and sexual desires,” Emery explained:

“Don’t let your child have the access to the code to purchase apps on their phones, iPad and computers.”

I am praying for you, because this is one battle we must face head on!

“If any of you lacks wisdom, you should ask God, who gives generously to all without finding fault, and it will be given to you.“ ~James 1:5 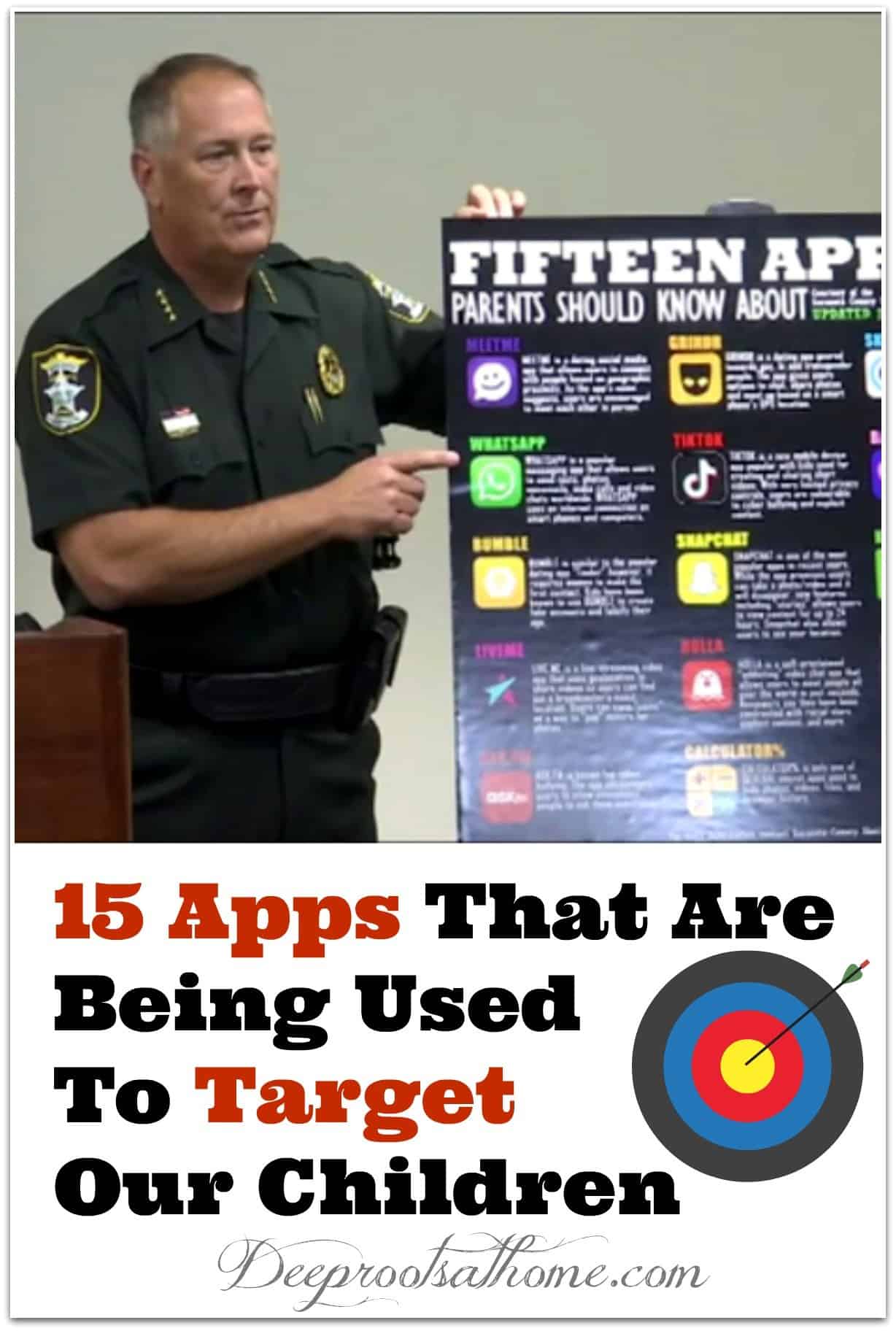