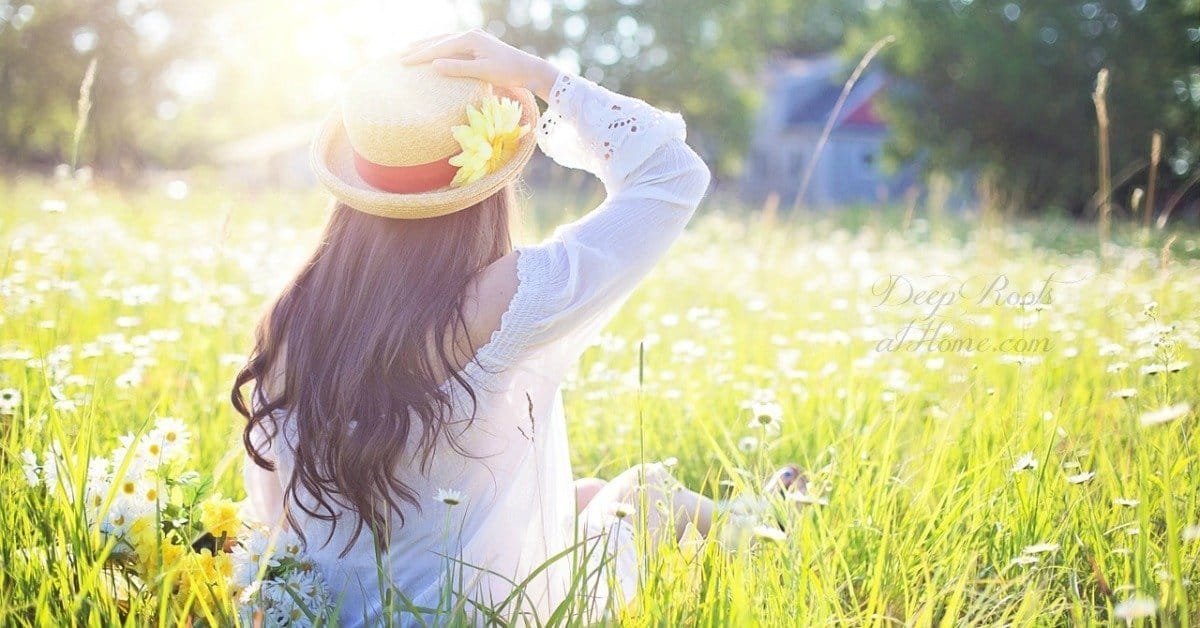 Image by Jill Wellington from Pixabay

Astaxanthin is a super-powerful antioxidant with broad-spectrum, system-wide health benefits. It acts on at least five different inflammation pathways.

I began taking 12 mg. of this Astaxanthin in a gelcap last year in time for summer for 2 reasons: internal UV sun protection and improved skin quality. It’s been shown to:

But it gets EVEN BETTER.

There is a reason astaxanthin is so anti-aging!

Salmon, crab, and lobsters that eat krill gain that lovely pink/red color from this compound. In fact, some scientists believe it is astaxanthin that gives salmon the strength and endurance to make their epic 5-7 day swim to spawn upstream.

They get it from the microalgae haematococcus pluvialis, which is part of their diet.

Whenever this algae’s cells are under stress, such as lack of food, water, intense sunlight and heat, or bitter cold, they produce astaxanthin as a defense mechanism. Amazingly, this allows the cells to survive for up to 40 years in a dormant state, until conditions improve and they go back into their green, motile stage.

Many are finding this VERY helpful when they have to fly a lot or are under inordinate stress such as a marathon race or lifestyle.

Astaxanthin is more powerful than other antioxidants

“When we started producing astaxanthin for human consumption, our employees started taking it. Those that surfed came back to us and said, ‘Hey, I’m not getting sunburned anymore. I’m not putting my suntan lotion on. I’m not getting burned. This stuff seems to help protect me from the sun.’ And the sun is more intense in Hawaii. We did a clinical trial, and sure enough, taking astaxanthin – the study we did was only four milligrams, over two weeks… actually did provide significant protection against UV radiation.”  ~Dr. Gerald Cysewski, UC Santa Barbara, a leading authority on large-scale production of microalgae, including the microalgae Haematococcus pluvialis, from which astaxanthin is produced.

Astaxanthin displays protection against UVA-induced DNA damage. It simply protects your skin against damage. It can also can handle multiple free radicals simultaneously. “It does this by forming an electron cloud around the molecule.  When free radicals try to steal electrons from the astaxanthin molecule, they’re simply absorbed into and neutralized by this electron cloud, all at once.” Dr. Cysewski continues:

“Astaxanthin can also cross the blood-brain barrier and the blood-retinal barrier, and provide antioxidant and anti-inflammatory protection to both the brain and the eyes. That’s where you need a carotenoid.” 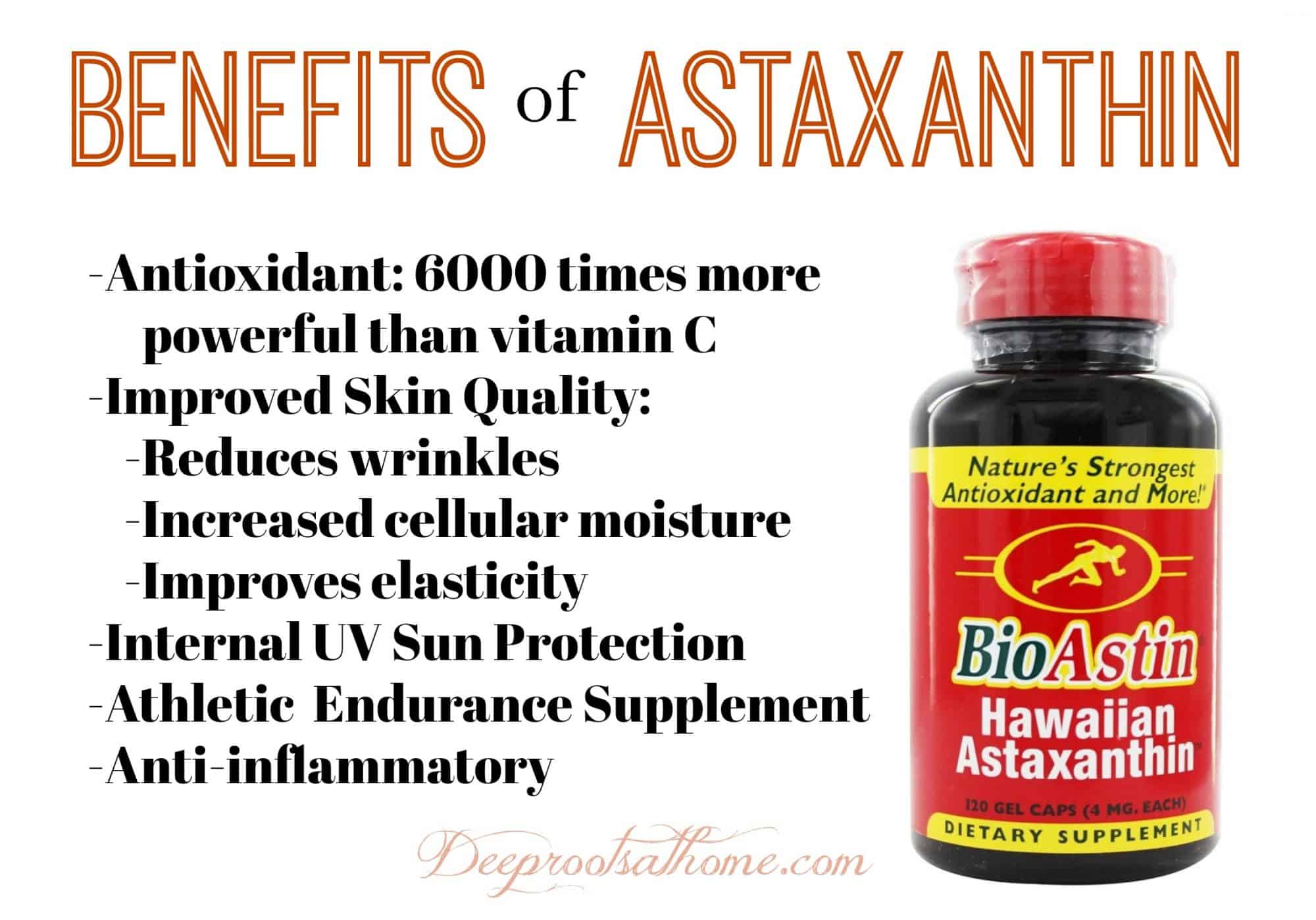 Some commercial fisheries add synthetically-produced astaxanthin to their fish feed, in order to help give their fish the same appearance as fish caught in the wild. The synthetic form is produced from petrochemicals – the same as you put into your car.

Astaxanthin Works in ALL Cells

“One of astaxanthin’s most unique features is its ability to protect both water- and fat-soluble parts of the cell. Carotenoids are typically divided into water-soluble or fat-soluble, but astaxanthin belongs to an in-between group that can interface between both water and fat.

“This means the astaxanthin molecule can affect and expand the biolipid membrane of ALL cells. It’s not simply floating around in your bloodstream; it actually integrates into the cellular membrane.” (source)

Astaxanthin is not a fad.

I am always looking for ways to strengthen my health. 1 gelcap (12 mg.) of BioAstin/day, taken at a meal with some fat, especially in spring and summer is one supplement I may take forever. Other supplements I’ve taken continually through the years include:

At 67, this is my regimen. I’m pretty disciplined about it, and so is my husband. We are not on any medications and eat simply (non-processed, organic whole foods and “clean” pastured meats and eggs). An attitude of thanksgiving and prayer helps. Honestly, we have given up on the traditional medical system, do not get our advice there and haven’t for years. We have a naturopath for testing. With TRS our challenges with Lyme’s are over and my high C-reactive protein is a thing of the past.

Though my reason for starting astaxanthin was for internal sun protection, I will keep it in my arsenal for the incredibly wide range of benefits it offers. 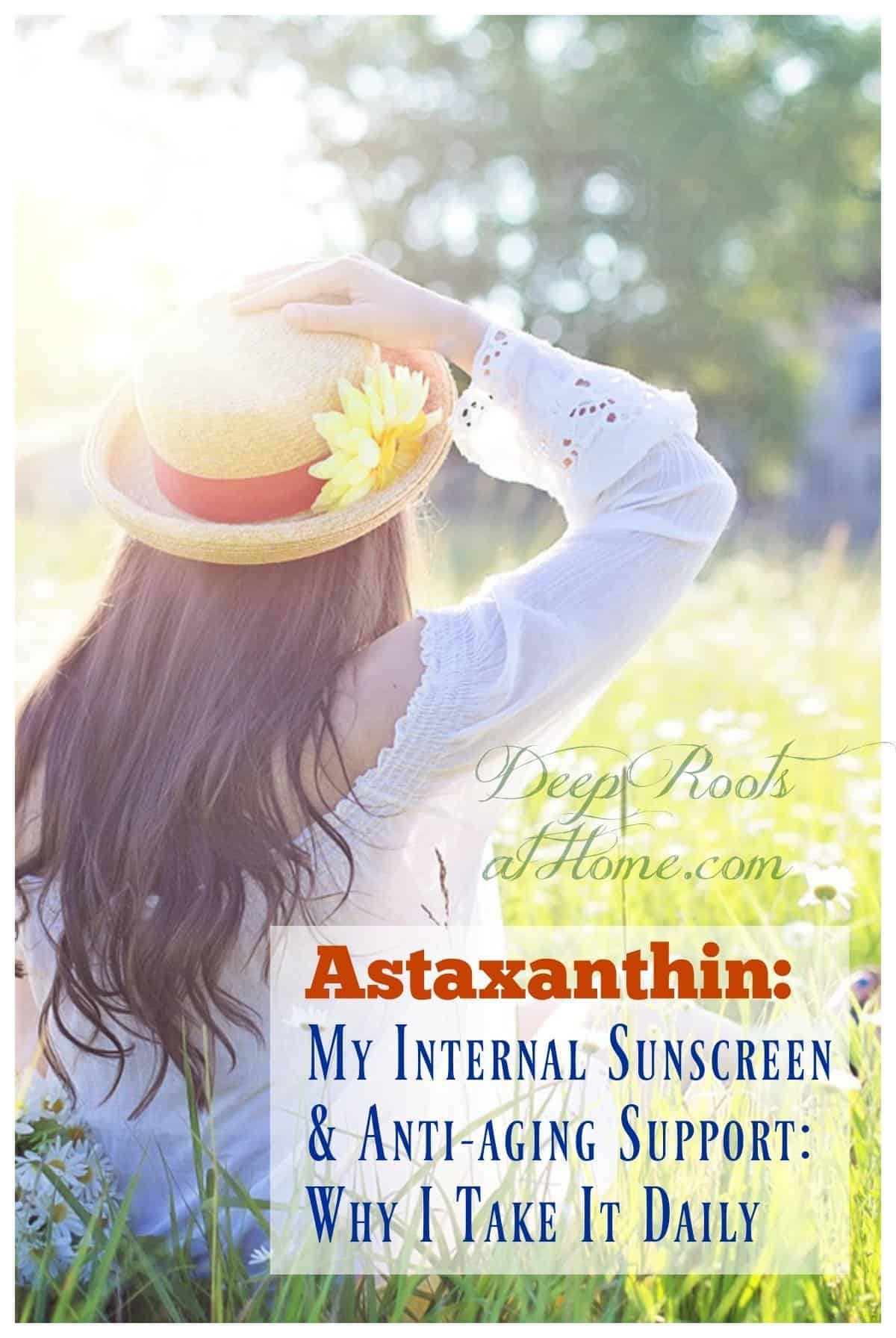