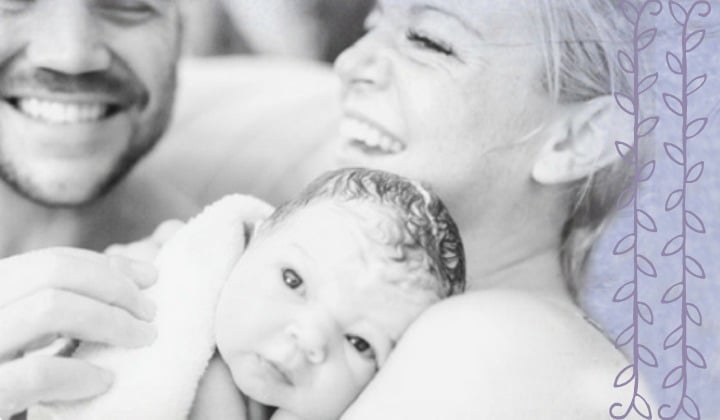 Megadoses of Vitamin C have been used by medical doctors to make childbirth labor shorter and less painful. And according to this 1979 report, there were even more benefits.

[I bring you this illuminating article From Let’s LIVE Magazine, October, 1979, because we have been steered away from old knowledge to the detriment of both mother and baby. You may remember the medical establishment vilified Nobel Prize winner Linus Pauling for letting the cat out of the bag that high-dose Vitamin C was curative for many health conditions. See pertinent linked Vitamin C (aka ascorbic acid) studies below for those interested in doing their own research.]

For the purposes of this post, this sodium ascorbate is the best absorbed form of Vit C.

Only a handful of knowledgeable doctors are still familiar with the virtues of this important vitamin in pregnancy. Working separately, they have each achieved the same successful results:

Dr. William Saccoman, a general practitioner in San Diego and instructor at the University of California, San Diego, reports: “The ordeal of labor in the case of vitamin C pregnancies is definitely shorter and less painful with women having first babies the average time in labor is approximately 5 to 6 hours compared to non-vitamin C deliveries around 15 to 16 hours.

“The megadoses cut the time to less than half. The birth canal of the vitamin C mother is more elastic. We find, therefore, a marked reduction in incidence of laceration and tearing during the delivery. The incidence of striae — stretch marks —is markedly reduced. too. We also find the mother returns to normal much more rapidly.”

Dr. Saccoman observations are based on approximately 500 pregnancies and deliveries he conducted during the last 10 years.” 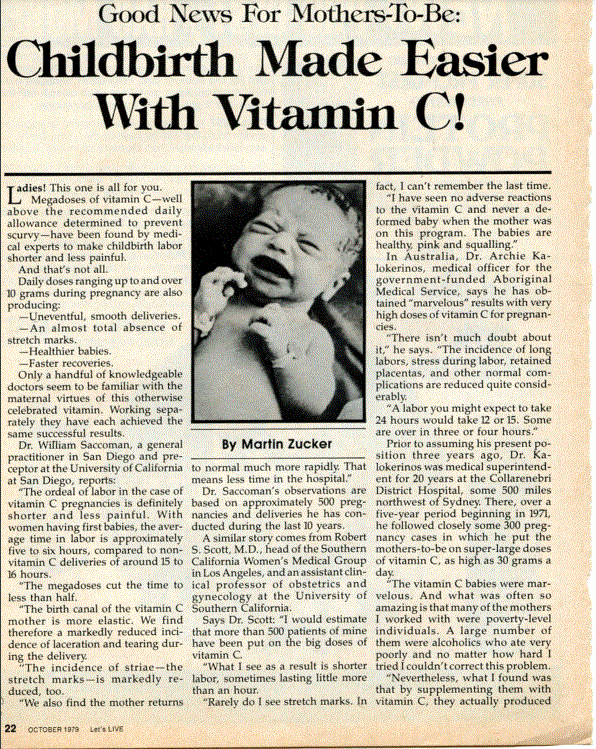 “Says Dr. Scott: “I estimate that more than 500 patients of mine have been put on the big doses of vitamin C. What I see as a result is shorter labor.

“Rarely do I see stretch marks. I’ve seen no adverse reactions to the vitamin C and never a deformed baby when the mother was on this program. The babies are healthy, pink and squalling.”

“There isn’t much doubt about it”, he says. The incidence of long labor, stress during labor, retained placenta, and other normal complications are reduced quite considerably.”

“Over a five-year period beginning in 1971, he followed closely some 300 pregnancy cases in which he put the mothers to be on high doses of vitamin C – as high as 30 grams a day.” [Yes, this is what they did!]

“The vitamin C babies were marvelous, and what was often so amazing is that many of the mothers I worked with were poverty level individuals. A large number of them were alcoholics, ate very poorly, and no matter how hard I tried I couldn’t correct this problem.”

“Nevertheless what I found was that by supplementing them with vitamin C, they actually produce babies that were healthier than a lot of the newborns in the general community. And as the babies were growing, they showed fewer problems in infancy than other babies. To me, this has always been quite incredible.

“Even if we couldn’t correct the diet, just a simple supplementation was doing so much good.”

“The findings of these medical men provide solid validation to the “Lone-Ranger” work done more than 15 years ago by Fred R. Klenner, MD., the pioneering practitioner of vitamin C therapy in United States.

“Dr. Klenner closely studied 322 consecutive pregnancies over a number of years. Klenner’s patients took daily oral doses of vitamin C according to the following schedule,” (seen on pg. 27 of article below):

“Says Dr. Klenner: “The process of pregnancy drains ascorbic acid (vitamin C) from the mother. Stress depletes the body of vitamin C – and pregnancy is a normal stress factor.

“So requirements of vitamin C are multiplied many times.

“We humans don’t produce our own ascorbic acid like most animals do. That is why we have to provide it, and that is why in stress situations like disease and pregnancy it is so necessary to go into the higher doses.

“If you don’t, you open the door to all kinds of problems and infections.” 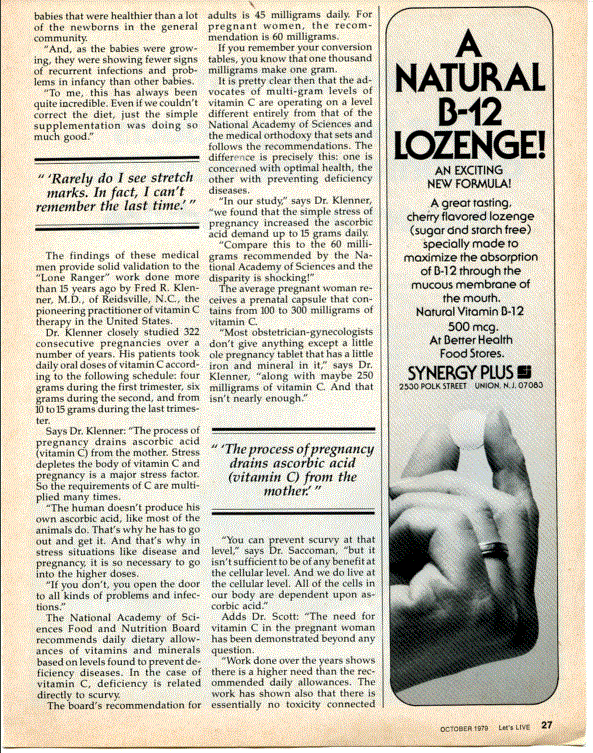 Originally, the daily dietary allowance of vitamins and minerals was based on levels found to prevent deficiency diseases. In the case of vitamin C, deficiencies related to scurvy.

“If you remember your conversion tables, you know that 1000 (mg) milligrams makes 1 gram.

“It’s pretty clear than that the advocates of multi–gram levels of vitamin C are operating on a completely different level from that of the medical orthodoxy that set the recommendations at the bare minimum. One is concerned with optimal health and the other with the basics to prevent a deficiency disease.”

“In our study”, said Dr. Klenner, “we found that the simple stress of pregnancy increases ascorbic acid demand up to 10 grams a day. The average pregnant woman receives a prenatal that contains 100-300 mg of Vitamin C.”

Compare this to the 60 mg RDA recommendation, and the disparity is shocking!

And it’s true! Popular One-A-Day Prenatal contains ONLY 60mg of vitamin C. Smarty Pants contains 48mg. Many contain NONE at all!

This is derelict and irresponsible!

“Work done over the years has shown that that there is essentially no toxicity connected with the large doses.”

(Fact-check: NIH states, “Vitamin C has low toxicity and is not believed to cause serious adverse effects at high intakes [8].

“So I urge my parents patients to use more vitamin C.

“We start them slowly with 1 gram two-three times/day and increase the dose as tolerated until we get them up to 5 grams or more.”

“There is a high level of problems associated with infants born in this country, and we don’t know why. We are beginning to think nutrition and lifestyle may have a great deal to do with it. Although we are a rich country country we have developed some poor dietary habits.

“That’s why I feel it is important but my patience on a well-balanced diet, along with supplementation, and the large doses of vitamin C.

“I want to have as many factors working for the mother and the baby inside as possible.” 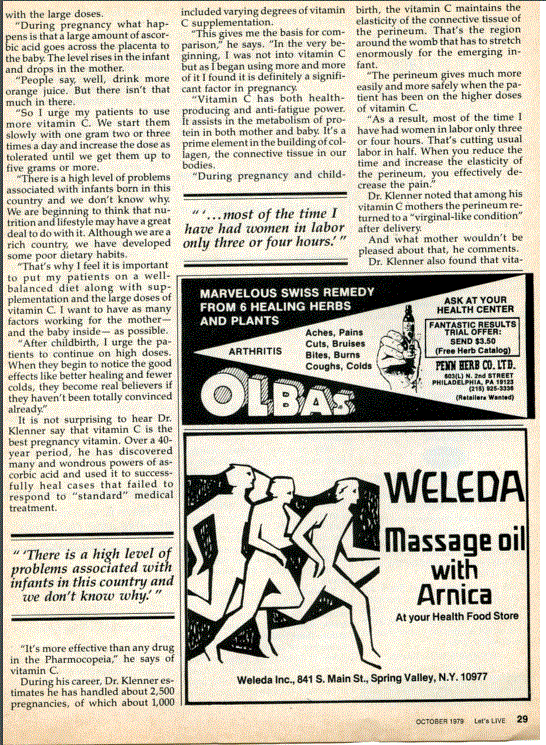 “After childbirth, I urge my patients to continue on high levels. When they begin to notice the good effects, they become real believers if they haven’t been totally convinced already.

“It’s more effective than any drug in the Pharmocopeia”, he says of vitamin C.

During his career, Dr. Klenner handled about 2,500 pregnancies, of which about 1,000 included varying higher degrees of vitamin C supplementation.

“This gives me a basis for comparison”, he said. “In the very beginning I was not into vitamin C, but as I began using more and more of it, I found it definitely was a significant factor in pregnancy.

“Vitamin C has anti-fatigue power. It assists in the metabolism of proteins in both mother and baby.

“During pregnancy and childbirth, the vitamin C maintains the elasticities of the connective tissues of the perineum. The perineum gives much more easily and more safely when the patient has had higher doses of vitamin C.

“As a result, most of the time, I have been with women in labor only three or four hours – that’s cutting the usual time of labor in half.

“When you reduce the time and increase the elasticity of the perineum, you effectively decrease the pain.”

‘Dr. Klenner noted that among his vitamin C mothers, the perineum returned to a “virginal-like condition“ after delivery.

“And what mother wouldn’t be pleased about that.”

Vital Work of Vitamin C (aka ascorbic acid) in Pregnancy:

Robert F. Cathcart, M.D., shows from his clinical findings on 9,000 patients that the body’s ability to absorb Vitamin C is directly proportional to the severity of stress and/or disease: 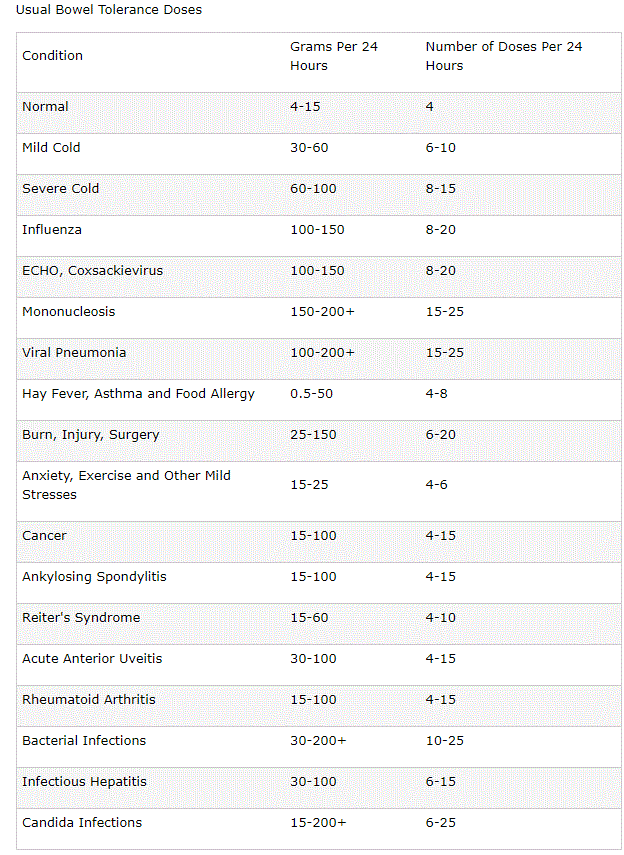 Share
Telegram
Pin
« The Hidden History Of Polio, the Disease That Never Was
13 Undeniable Facts Re: Big Pharma and Snake Venom by Mike Adams »