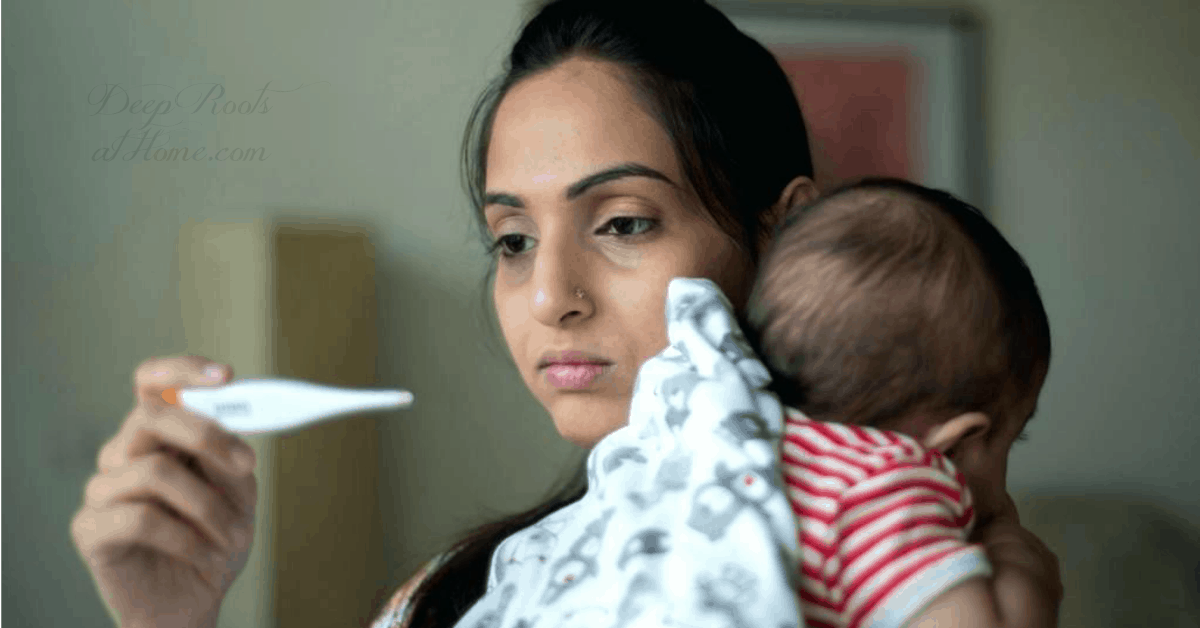 Hippocrates once stated, “Give me a fever, and I can cure any illness.” And as we shall see, this is is not far from the truth!

As the title states, having febrile childhood infectious diseases when young – under 9 and even as an infant – protects us from having a variety of diseases and cancers as we get older.

It’s true. Childhood diseases challenge and strengthen the neuroimmune system, releasing toxins they absorbed in the womb. Studies show that the more infectious diseases and fevers a child has, the healthier they are as an adult – including lower risk of cancer and heart disease.

That may be the reason why it’s not unusual for parents to report physical and psychological developmental leaps after a bout of measles, mumps, chickenpox, etc.

Most parents believe they’re helping their children by giving them vaccines to prevent these “developmental” illnesses. But unknowingly they’re preventing their children from building healthy, strong immune systems.

Below are two articles about this protection phenomenon, followed by a collection of science studies.

Neil Miller: Why people choose not to Vaccinate
Measles vs. MMR Vaccine: Risks and Benefits

A febrile disease is one that causes a fever (such as measles, mumps, rubella, chickenpox, pertussis and scarlatina).

By denying children the opportunity to have these diseases at the “right” time (and so train their immune system as it has been designed), we are now experiencing more serious, life-threatening disease starting as early as in late childhood and teens.

History of chickenpox in glioma risk: a report from the glioma international case-control study (GICC).
“In our study, a positive history of chickenpox was associated with a 21% lower glioma tumor risk, adjusting for age and sex. The protective effect of chickenpox was stronger for high-grade glioma, particularly among those under age 40. Our findings, which represent the results of the largest study to date on this topic, confirm the inverse associations previously reported.”

“Our findings provide additional support to the hypothesis that infections by most common childhood pathogens may protect against Hodgkin lymphoma (HL) or, at least, be correlated with some other early exposure, which may lower the risk of Hodgkin lymphoma (HL) in adulthood.” (PubMed Study)

In addition, our study shows that measles may provide a protective effect against non-Hodgkin lymphoma (NHL).

“It is proposed that delayed infection could explain the increasing non-Hodgkin lymphoma (NHL) trends. (This suggests that each one year increment in the delay of infections would result in a 1.2% increase in the risk of NHL.) The model of delayed infection has been proposed also to explain increasing prevalence rates of asthma.” (PubMed Study)

“Measles and/or combined childhood infections are protective for Hodgkin’s disease in our data… The present data cannot distinguish between measles and total infections but are consistent with a specific protective effect of measles in school age children.” [They found that infection with measles during childhood cuts the risk of developing Hodgkin’s disease in half (OR = 0.53)] (Source: British Journal of Cancer)

Article about a 2018 paper: Childhood leukemia linked to lack of childhood infections
“For the immune systems to function properly, it is imperative that the babies are exposed to bacteria and viruses right from infancy.”

Mumps and ovarian cancer: modern interpretation of an historic association
“Prior to vaccination, mumps was generally a mild illness but could have sequelae including orchitis. Nevertheless, our study suggests there had been an unanticipated long-term anticancer (ovarian) benefits of a mumps infection, such as we have described in this paper. Despite the epidemiologic evidence that mumps might reduce the risk of ovarian cancer, this association has largely been ignored, probably due to the lack of a plausible biologic explanation.”

In Colon and Rectal Cancers

The following article discusses how colon and rectal cancer rates in younger age groups have been increasing significantly since the 1950s.
Colon and Rectal Cancers Rising in Young People

While there is no evidence this could be linked to vaccination or not having febrile diseases, it is perhaps significant the rise [of colon cancer] started for the generation born in the 1950s, who were the first to participate in the mass vaccination programs beginning in 1953. The rate also rose a lot for those born around 1990, the period when immunization schedules in the first world sharply expanded and autism and allergy rates took off—autism is strongly associated with bowel issues.

Association of measles and mumps with cardiovascular disease: The Japan Collaborative Cohort (JACC) study
“Measles and mumps, especially in case of both infections, were associated with lower risks of mortality from atherosclerotic CVD.”

“This reliable case-control study described that, with 95% probability, going through childhood diseases with fever (Febrile Infectious Childhood Disease or FICD) results in a reduction of between 5% and 32% of all cancers except breast cancer, with an average of 18%. This is very significant.”

“A strong association was also found with the overall number of FICD, both ‘classical’ (measles, mumps, rubella, pertussis, scarlet-fever and chickenpox) and ‘other’.”

“Conclusion: Infections may play a paradoxical role in cancer development with these acute infections being antagonistic to later cancers.”

Is There a Lesson Here?

One of the great lessons we learned with these routine children’s diseases was to let them run their natural course and keep them comfortable.

That when it came to childhood illnesses, it was usually better to do doing nothing since something meant a visit to a pediatrician (and you know what you end up getting there!)

And thankfully, we learned not to worry. We learned by reading. We read every book available at the time.

That’s why today I teach families to stop freaking about childhood illnesses and allow the fever to run safely.

Share4.2K
Telegram
Pin24
4.2K Shares
« Fathers, Take Your Children to Church: You Can Make a Difference
SIDS Largely Eradicated In Sweden & Japan by Doing This 1 Thing »