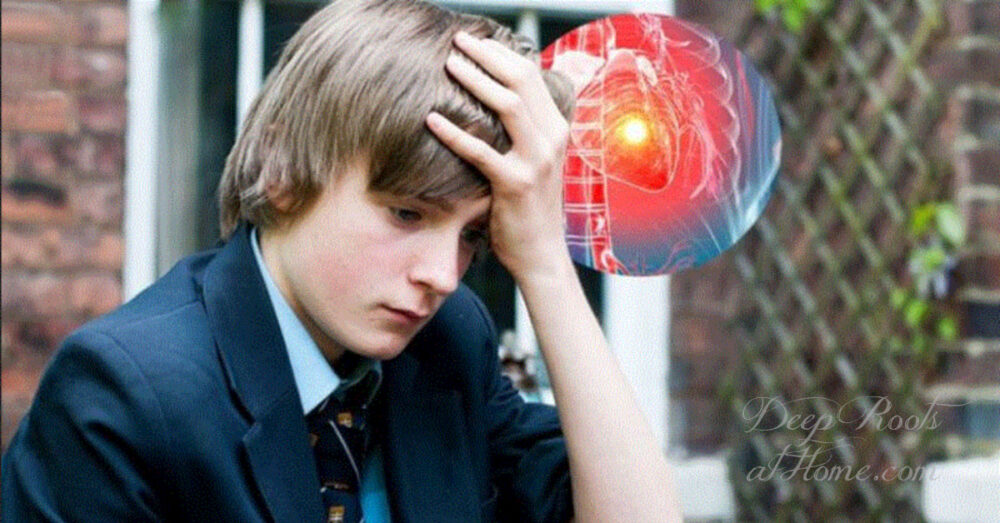 The CDC and the FDA knew the SARS-CoV-2 spike protein disrupted function of the heart since December 20, 2020, but they are still going strong with injecting children 12-17 and now mandating for children 5-12.

Dr. Jane Ruby explains how the spike protein is causing myocarditis and why this is such a big deal.

The spike proteins in the injections are directly responsible for cardiac damage, especially in young people under 30.  Spike proteins directly compete with the ACE2 receptor that is cardio-protective.

There is no such thing as a mild case of Myocarditis.

When the kids get myocarditis after the vaccine, 90% have to be hospitalized. They have dramatic EKG changes, chest pain, early heart failure. They need echocardiograms. If the ejection fraction is slowing, they need medications to prevent heart failure. ~Dr. Peter McCullough

Note the Myocarditis Reporting in VAER (with only ~1% reporting):

Updated July 31, 2022: Note the 50,739 myocarditis cases (again, this is with only ~1% reporting). There is no curative treatment for myocarditis, according to Johns Hopkins’ website.

The CDC want us to believe “most cases are mild, and individuals recover often on their own or with minimal treatment.” (source)

But this is NOT what we are hearing from those teens and young adults who have experienced this.

It is important to know these are REAL PEOPLE being harmed.

Previously a healthy athlete, 18-year-old Isaiah Harris (see photo) from Springdale, Arkansas developed endocarditis, suffering a heart attack 48 hours after a second dose of Pfizer’s COVID vaccine. Isaiah said he “would rather get COVID than have a heart attack”, and his father concluded, “Isaiah would have been better off to have COVID and be healthy than have a possible life-long issue with his heart, and now another possible heart attack if he overextends himself in the next three to six months.” 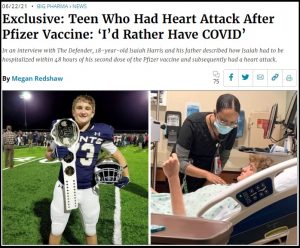 Alex Franks (see photo) was a healthy 17-year-old high school junior from Pittsburg who never had any medical issues until just two days after a second dose of Pfizer’s experimental COVID shot. “It was the middle of the night. I was walking upstairs from the basement when I got a sudden constricting feeling in my chest,” Alex recounted. His parents immediately rushed him to the hospital. His mother Karen recalls, “That’s when things became eye-opening for us because it became much more serious very, very fast.” That is when doctors discovered Alex Franks had myocarditis, inflammation around his heart. 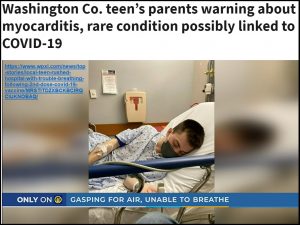 What about the untimely deaths of 19-year-old Simone Scott and 13-year-old Jacob Clynick who both lost their lives due to complications related to this condition?

13-year-old Jacob Clynick (see photo) had very recently completed 8th grade and was looking forward to starting high school and joining the band. Instead, he died three days after his second Pfizer shot. According to his aunt, Tami Burages, “A week ago today my brother’s 13-year-old son had his second COVID shot. Less than 3 days later he died. The initial autopsy results showed that his heart damage was consistent with myocarditis, enlarged with fluid surrounding it. He had no known health problems. Was on no medications.” According to his obituary, he “…was a student at Zilwaukee Elementary. Jacob was an active member of the church youth group. Jacob was known for his jokes and had a meme for every occasion. But, what he really loved most was his family.” 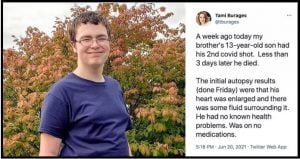 According to her grieving parents, 19-year-old Simone Scott (see photo), who died after a heart transplant post-COVID shots, was healthy and in her second semester at Northwestern. Simone had received her second Moderna jab May 1st, and made a recent surprise visit home for Mother’s Day. Her mother, Valerie Kraimer remembers, “I did notice that she was kind of stuffy, so her voice wasn’t exactly the same.” Simone returned to school on May 11, but only got worse even after a visit to the doctor; all tests were negative including a COVID-19 test. 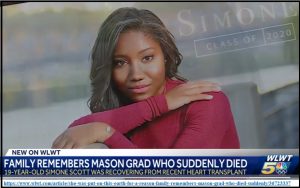 Her mother recalled, “Simone texted her father and said, ‘Dad, I feel so dizzy. I cannot get out of bed’ and that’s when everything really started from there.” Her father called Northwestern campus police to arrange for someone to check in on her, and “We learned that a doctor had to jump on her chest and give her CPR because she was that bad, and then the whole cascade of events happened. They had to intubate her and realized that she was in heart failure,” her mother said. Doctors believe she developed myocarditis after her second dose of the Moderna jab. After multiple interventions including a heart transplant, 19-year-old Simone Scott died on June 11th… scarcely over a month after she had flown home for Mother’s Day.

Looking at the CDC’s estimated fatality rates for COVID-19 illness in these age groups, it’s difficult to grasp how “Vaccine advisors” arrived at the conclusion that “the benefits of vaccination still outweigh the risks”. 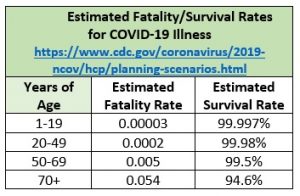 Even Dr. Fauci acknowledged  we do not know if these shots prevent COVID infection or the spread of the virus to others — or if they do, how long this limited immunity might last. So, how is it possible that these so-called “vaccine benefits” could outweigh the very real risks of these experimental mRNA shots — even if only looking at the increased risk of developing myocarditis/pericarditis — in a population with a statistically zero risk of death if they ever experience COVID-19 illness? (source)

Here are more myocarditis cases reported in the mainstream news:

Footballer Wessam Abou Ali, 22, awake but ‘shocked’ in hospital after collapsing on pitch in ‘horrible experience’

Jens (27) collapses on the football field and dies: “This is not… (Maldegem)

Frederic Lartillot, French footballer collapses in changing room, passes away due to heart attack after game

Benjamin Taft, 31, German footballer collapses after game, passes away due to heart attack

Anna Terentyeva, the leading soloist of the Perm Ballet, has passed away

Miss World contestant, 24, dies suddenly at home after failing to show up for work

Deep Roots At Home now has a PODCAST! We are doing this on a trial period to see if this interests our audience. So head over today and like, share and download the first few episodes! https://buff.ly/3KmTZZd