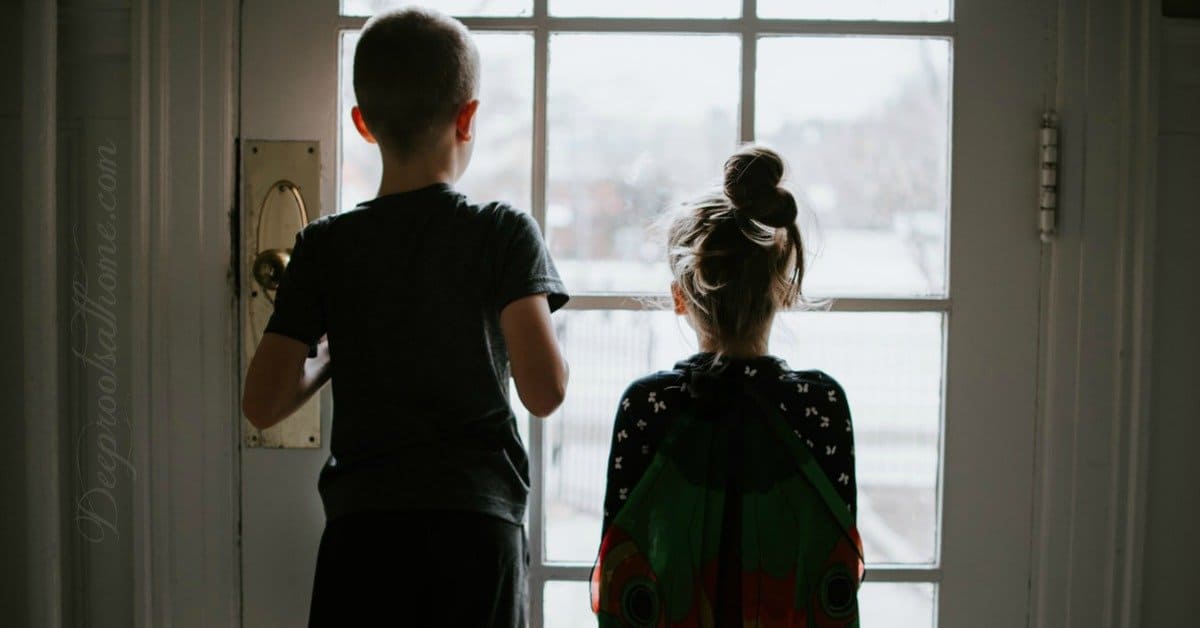 Photo by Kelly Sikkema on Unsplash

Written in collaboration with a trusted friend who has helped me research. Thank you!

[Why is a parenting/natural living blog posting on a situation we can’t fully grasp because it is still unfolding? To learn. This is for every independent thinker, regardless of politics. Should we be trusting the medical establishment now? Will COVID-19 result in a push for a mandatory vaccine in the future? The video below contains important insights that may alleviate your fears about the virus. It provides an opportunity to consider information that can serve as a launching pad to more in-depth research you can do on your own. The more you know, the less anxious you will be about the unknown. We all want that kind of peace.

Get your free copy of the Vital Vaccine Info E-Book
First, we are told that COVID-19 is the most contagious virus since the Spanish flu, and if that is true, we all must be vigilant to do everything we can to flatten the curve and protect others. Every life matters. Generally, the media is only telling us about the risks of suffering and death that COVID-19 poses. And we are grieving.
But many of you may not be aware of the suffering and death that is also inevitable from the economic collapse that this shutdown is causing. To care about the suffering of one group is not to diminish the suffering of another group. The compassionate choice is to make sure that people have access to the entire spectrum of information about this current crisis. ~Jacqueline]
If I had told you last Christmas that before Easter, all the schools in America would be closed; all restaurants would be limited to carry-out, delivery, or drive-thru; and all businesses that do not provide “essential” goods and services would be barred from operating, would you have believed me?


Yet here we are. Our elected officials tell us that these drastic measures are necessary in order to protect us from a disease so unprecedented in its transmissibility and virulence, that our healthcare system would be overwhelmed and we would experience a catastrophic death rate unless we took swift action.

What if there may be effective treatments that can reduce the severity and duration of symptoms, as well as reducing the number of deaths?

What if the deaths being reported are not actually outside the parameters we would expect from other common respiratory illnesses?

What if the impact of these extreme measures leads to much more suffering and death than COVID-19 itself?

Del Bigtree tackles these questions on his latest episode of the High Wire. Let’s research the preponderance of data available from a wide variety of highly credible sources, and Del brings all those sources together for us to consider.

For research purposes, below, there is a full outline of where in the video to find specific content.

Caveat: We are encouraging you to do your own research and verify everything in light that the numbers are changing daily since this was first aired. It remains highly insightful.

You may want to start after minute 20:00 to bypass the introduction:

*58:00 An existing anti-malaria drug, chloroquine could be used to effectively treat COVID-19. Dr. Didier Raoult, revealed that successful research trials of this treatment, both in China and France, have resulted in 100% of the patients experiencing symptom relief and a much quicker recovery time, down from 20 or 30 days to only 6. He states it would be unethical to withhold this treatment. 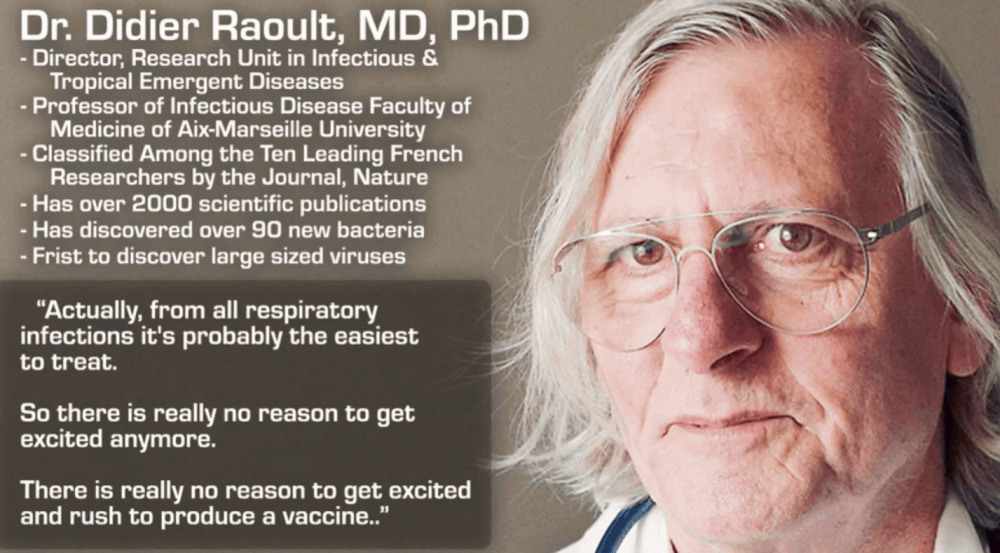 46:00 According to Dr. William Grace at Lenox Hill Hospital in New York City, many doctors in the United States are already using chloroquine to treat their COVID-19 patients with great success. (see video of his words)

18:35 But Dr. Anthony Fauci, one of the lead members of the White House Coronavirus Task Force, has been less than enthusiastic about the suggestion.

Most news outlets seem to support Dr. Fauci’s position, and have even published stories that make the suggestion to use it seem dangerous.

29:45 The man had actually ingested a fish aquarium cleaner that contained chloroquine.

36:33 The ban was not about safety concerns, but so people already using the drug for ongoing medical treatment wouldn’t experience shortages.

Perhaps the media are being influenced by the pharmaceutical companies, which provide 50-70% of their ad revenue. Here’s a clue: a vaccine developed for SARS-CoV-2, the virus that causes COVID-19, could net the industry hundreds of billions of dollars in profit. Maybe that’s why the news anchors are all talking about the need for a vaccine. 38:47

But where does Dr. Fauci fit into all of this? Fauci is director of the National Institute of Allergy and Infectious Diseases, which is working with Moderna to develop a vaccine for this virus. NIAID backs the WHO’s agenda to vaccinate every person on the planet. 41:54

51:05 There has been discussion that we could get the country back to work by Easter.

52: 27 Several news outlets said that moving so fast to get back to stability was “deadly nonsense” and “wildly irresponsible.”

A number of recognized research scientists disagree, saying that a lockdown is “unreasonable” and “counterproductive”, “grotesque, absurd, and very dangerous.”

But of the virus, they say it’s “the easiest to treat” and similar to respiratory diseases they see every year in terms of complications and deaths. “If we hadn’t known about a new virus…the deaths due to influenza-like illness would not seem unusual.” 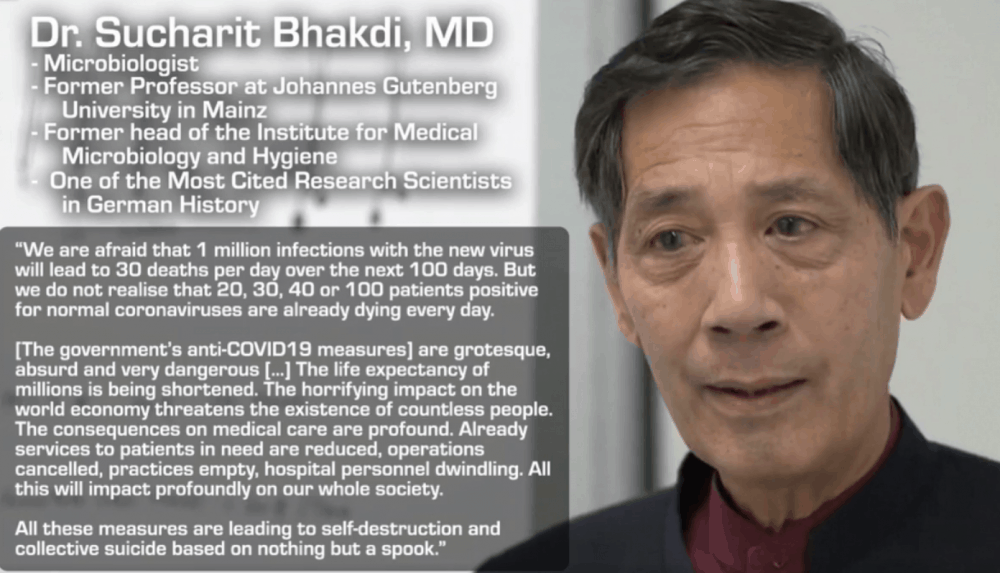 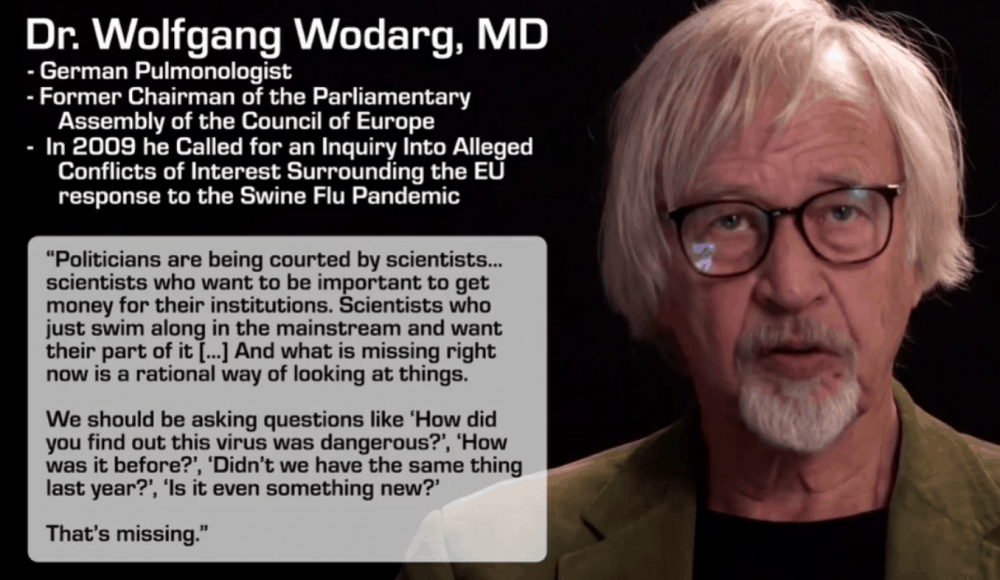 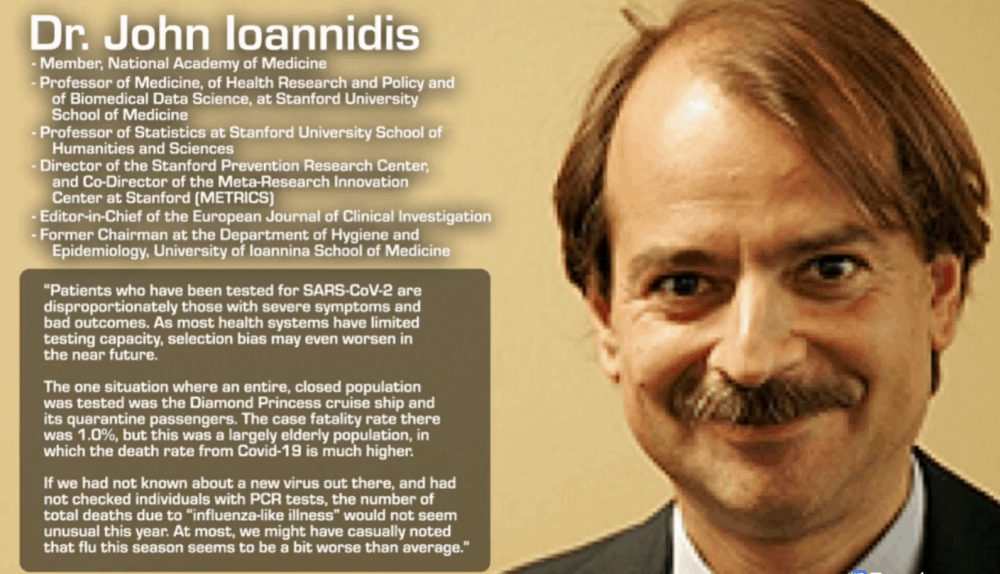 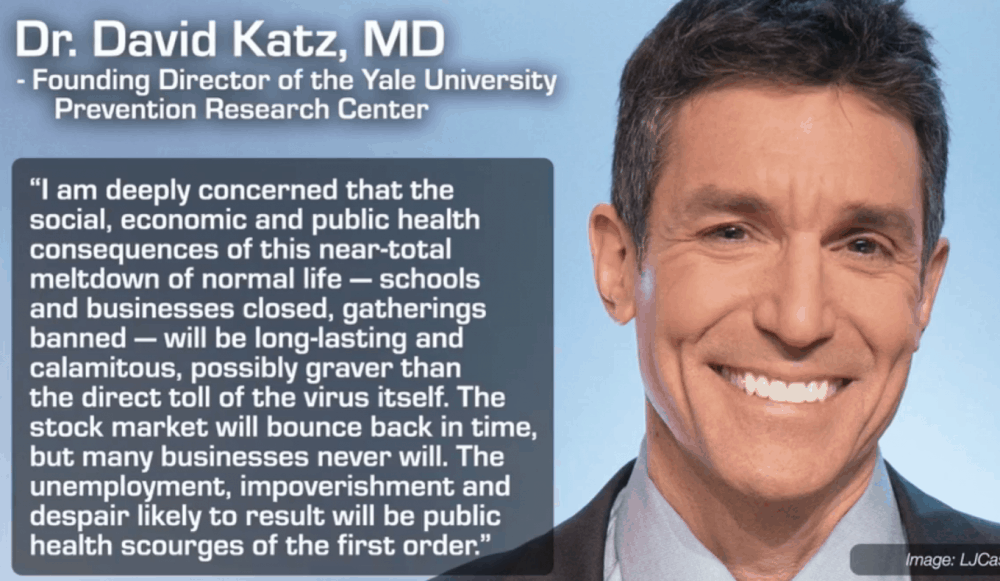 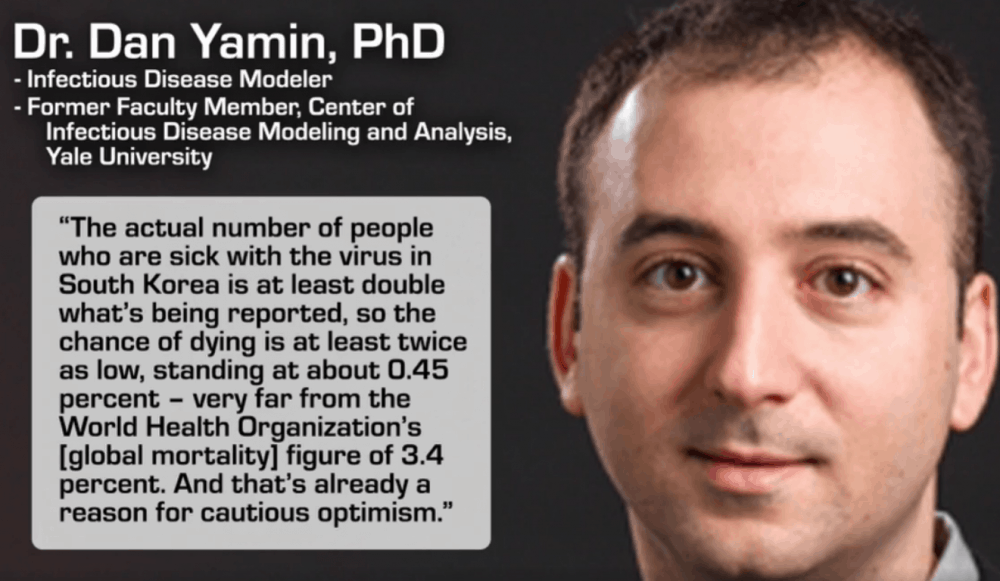 *1:05:38 A recent scientific research paper tells the same story: the death rate from COVID-19 is similar to that of other coronaviruses studied.

But what about all those people dying in Italy? 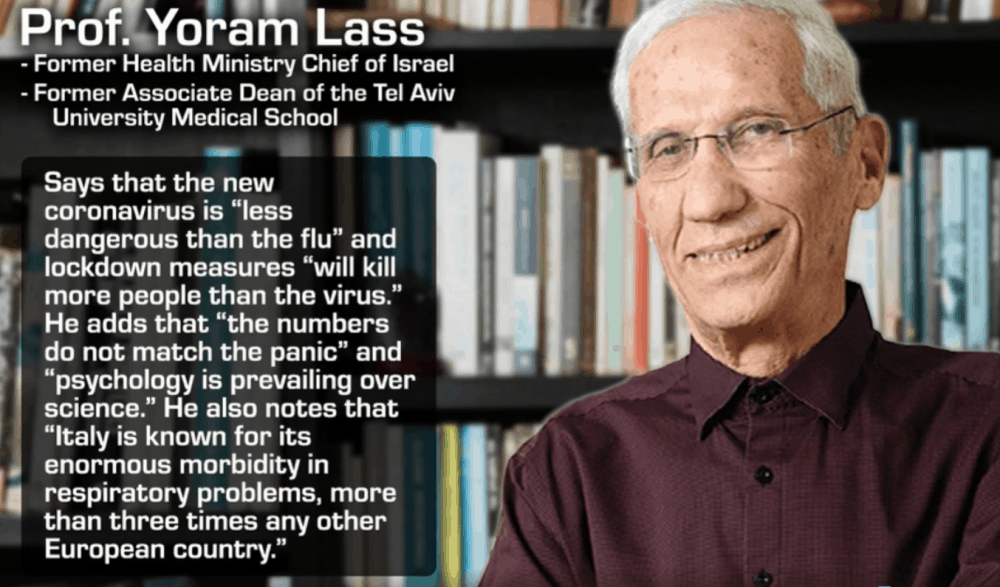 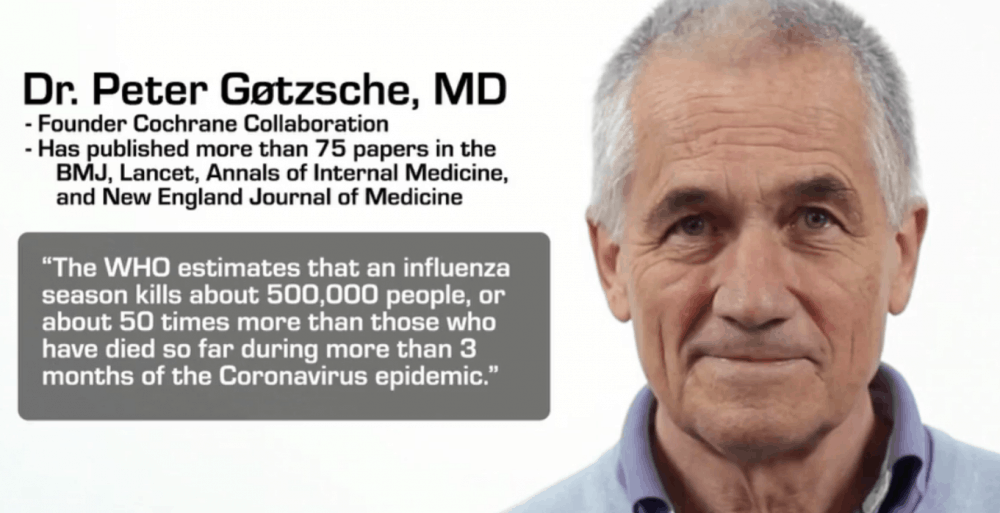 1:14:20 A newspaper tells the story of an intensive care unit stretched past its capacity by a sudden influx of flu patients. But that story was from 2018! Italy’s overburdened health system has been an ongoing problem for years.

1:16:36 “Only 12% of death certificates have shown a direct causality from coronavirus.” Most of the people who have been reported to have died from coronaviruses had comorbidities like heart disease, diabetes, or other serious health issues. This means that most of these people died WITH coronavirus, not FROM coronavirus.

1:18:10 Lombardy, the region of Italy with the highest COVID-19 death rate, also has the highest levels of elderly citizens and smokers.

1:19:25 We can use an internet site called MOMO (Monitoring of Mortality) to see weekly data that compares death rates to the average death rate within each country in Europe.

1:24:25 You can see the spike in death rates right now in Italy (you can search any date). It is not even as high as it was other times in the past four years, yet none of those events brought on such severe governmental restrictions of liberty.

1:30:57 “It’s not the flu!” we’re being told over and over again, with the implication that it’s much worse. A daily death rate for the flu could be as high as 334, while our current daily death rate from coronavirus (on March 26) is 69.

Are our numbers more accurate than those in Italy?

Probably not. Look at the CDC’s guidance on how to CODE coronavirus deaths:

1:36:50 “COVID-19 should be reported on the death certificate for all decedents where the disease caused or is assumed to have caused or contributed to death.”

So, if the rates of complication and death are similar to other respiratory illnesses, and if the rates of death are not causing most countries to experience a strain on their healthcare system, then why are we locked down?

1:39:35 Neil Ferguson of Imperial College London created a model predicting 2.2 million deaths in the United States and 500,000 in the United Kingdom. But now he has revised his estimate, saying the UK will likely experience fewer than 20,000 deaths.

1:42:24 Oxford epidemiologist Sunitra Gupta had criticized Ferguson’s model, expressing surprise that it had been so widely accepted. She put forth a model speculating that the virus had probably been circulating in the UK since mid-January, and in that case, many citizens may already have been affected and become immune to it, perhaps as many as 50% of the population.

1:54:33 The U.S. Federal Reserve does a yearly study called the Report on the Economic Well-Being of U.S. Households. The most recent one shows that 39% of Americans would have trouble covering an unexpected expense of $400.

Dr. Rogers calls the Imperial College study bad modeling because all they looked at was the virus, not the economy and deaths of despair. “The tragedy in this is that it’s unnecessary. It’s bad thinking based on bad data that leads to bad choices.”

So what do you think? Is the cure actually worse than the disease?

If something done by the governing bodies and/or media seeks to cause division or spitefulness against others, it’s a good sign that it’s the work of the enemy. I hope we are not falling prey to this tactic.

“Be alert and of sober mind. Your enemy the devil prowls around like a roaring lion looking for someone to devour.” ~1 Peter 5:8

We are making decisions without reliable data (Stat News) 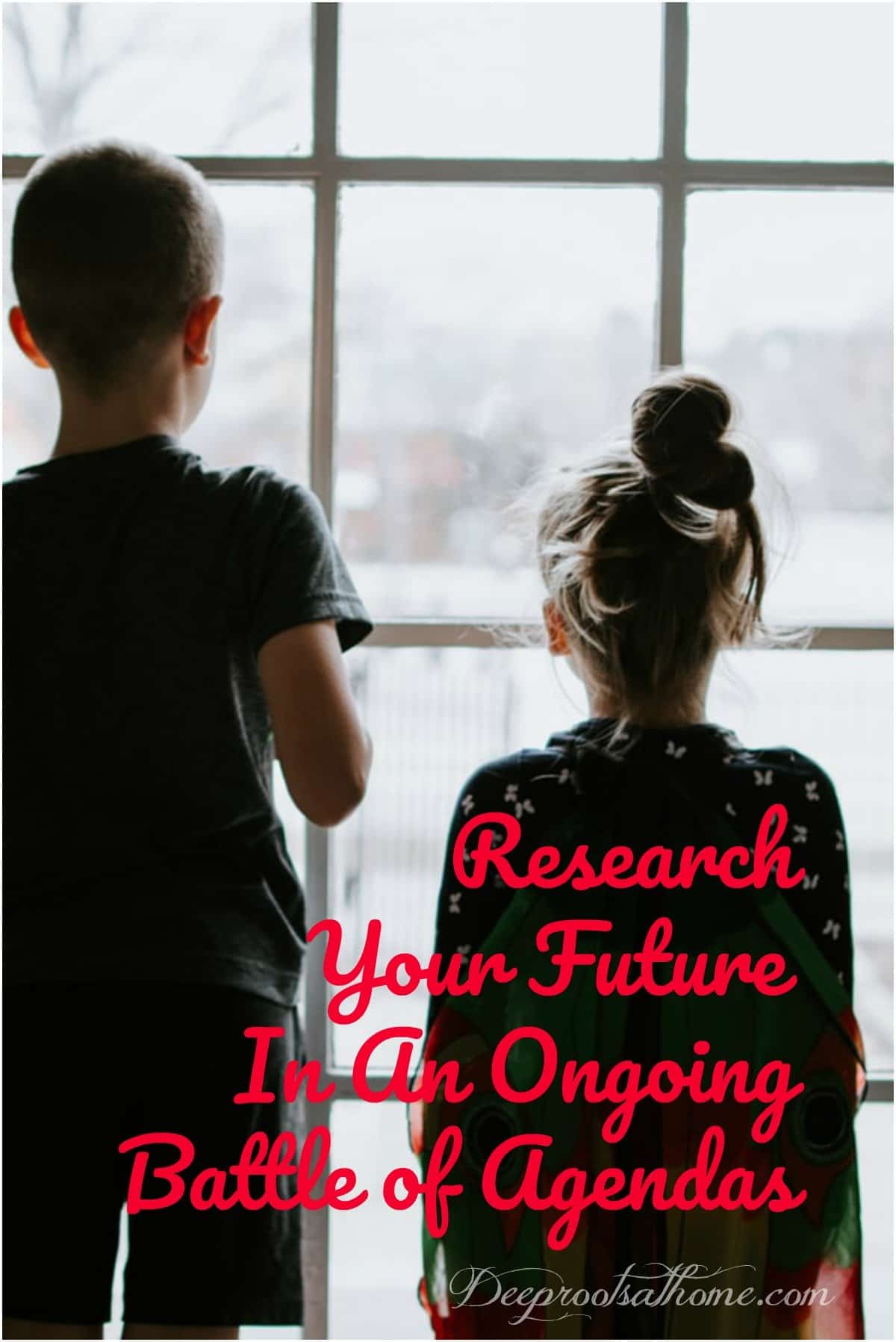 Share5.8K
Telegram
Pin26
5.8K Shares
« I Thought Tylenol Would be Pulled From the Market by Now
Amazed by Monarchs: Precision That Can’t Be Explained By Evolution »