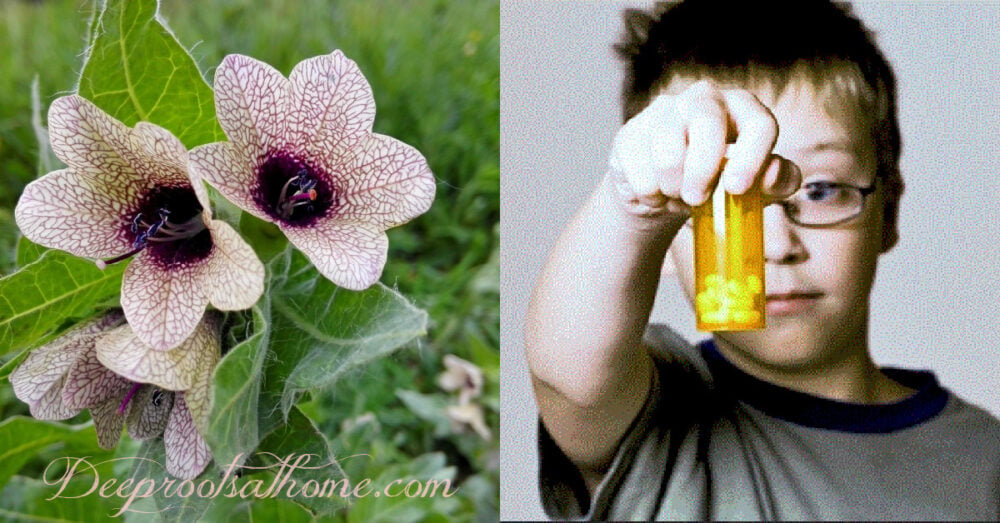 Hyoscyamus, you say? What is that? Teachers, school counselors, and most pediatricians have never heard of what I’m about to share with you.

I’m sad for the kids they have rule over. But now you will know.

Hyoscyamus Niger (Hyos.) is a homeopathic remedy prepared from the whole Hyoscyamus niger plant in the second year of growth. You would never us the herb as it is toxic in that strength, but only the extremely diluted homeopathic form. Hyoscyamus is pronounced like this.

This brings us to Attention Deficit Disorder (aka ADD) and we can include ADHD (with hyperactivity) if the symptoms below fit. For those who are new to homeopathy, it’s difficult to imagine it could address such a condition, especially without oft-harmful mood-altering pharmaceuticals. But homeopathy can do just that.

Hyoscyamus (in its very diluted homeopathic form only) is often recommended to relieve restlessness and reduces disruptive and inappropriate behavior, even extreme behavior.

Hyoscyamus in its UN-diluted herbal form should never be used as it can be poisonous.

Studies have shown that homeopathically dilute remedies containing Hyoscyamus yield improvements in impulsivity and focus in children with or without ADHD.

“Hyoscyamus can also be of benefit to people who tend to engage in foolish or inappropriate behavior, struggle with fidgeting hands and display facial grimaces, including sudden frenetic outbursts and involuntary twitching or grunting.”

It could change a child’s life. In fact, positively change the lives of entire families.

No more (or much less) frustration.

Super simple, inexpensive (less than $15 a bottle), and as always, homeopathics are side-effect free.

(If the following symptoms listed below fit, see the dosage schedule below.)

Hyoscyamus Niger – For ADHD With Hyperactivity And Excessive Talking

Homeopathica writes: “Homeopathic doses of Hyoscyamus Niger are an effective natural cure for ADD/ADHD. This medicine is prepared from the plant called Henbane. The child requiring Hyoscyamus shows hyperactivity and is extremely restless physically. He tends to move from one place to another and his movements are quick. The child is inattentive and lacks concentration. While studying, he may use inappropriate words and sentences or make up irrelevant answers. He/she is also very talkative and impatient. The child may inappropriately cry out suddenly or break into a loud laugh. He/she may show violent behavior like – scratching, striking, biting those around him. The child may insult, shout, scold, abuse or spit on people. These children may make nonsensical gestures and often play with their fingers.

The symptoms of inattention includes difficulty in focusing attention or following instructions, being easily distracted, losing items, not listening to others, and avoidance of activities that need attention.

The symptoms of hyperactivity may include tapping of hands or feet, interrupting others, difficulty waiting for a turn or doing anything quietly. This may include frequent mood swings, sudden anger, emotional outbursts, restless anxiety, tics, twitches and sleeplessness.

There may also be signs of other conditions such as learning problems like dyslexia and Tourette’s syndrome (a neurological disorder involving motor and vocal tics). ODD or oppositional defiant disorder is another behavioral disorder in which a child is angry, irritable, moody and argumentative, with vindictive behavior towards adults or authority figures. (See The Surprising Food That May Cause Anger, Aggression and ODD)

This applies to both children and adults.

Homeopathy is not just a placebo. 4 minutes.

Besides Hyoscyamus, Homeopathica lists other remedies that have often been used with success for ADD/ADHD. These should be discussed with an experienced homeopath who will guide you. They are: Tuberculinum Bovinum, Carcinosin, Stramonium, Veratrum Album, Chamomilla, Cina, Medorrhinum, and Merc Sol.

Homeopathy Plus lists even more symptoms that can be addressed with Hyoscyamus Niger. Not all of these symptoms may be present:

Dosage & How To Administer Remedy

“ADD, or Attention Deficit Disorder is often best met with Hyoscyamus 6C twice daily for a period of months. (In this website, under ‘Potency’, scroll down until you see the 6c potency)

“It is not the only medicine we can choose for this condition, but as it was given to me as a privileged observer in their world-famous clinic, The Prasanta Banerji Homeopathic Research Foundation in Kolkata, I learned it is one of the best for treating Attention Deficit Disorder. And in my practice, I’ve witnessed plenty of kids benefited by this method.

“So, whether your child is homeschooled, privately-schooled or publicly-schooled, if it’s clear that he simply cannot remain focused, is disengaged, and is not able to move forward, Hyoscyamus 6C is one of homeopathy’s little secrets every family should know about.

“Now, remember, as always, this is medicine and ought not to be used without certainty that it is indeed needed, and that it should be halted if it does no good. It should also not be used longer than 6 weeks if there is uncertainty. At 6 weeks, it’s time to re-assess. If the medicine has shown some improvement in the child’s behavior but more is needed, it’s an indication that the medicine was well chosen, and more time using it is in order.”

One more thought you might want to consider: Diet can play an important role in behavior.

Many don’t realize how food plays a huge factor in behavior:

Another Natural Help For This Child

TRS (nanozeolites in an oral spray) also uproots toxins and metals that drive ADHD and much more: 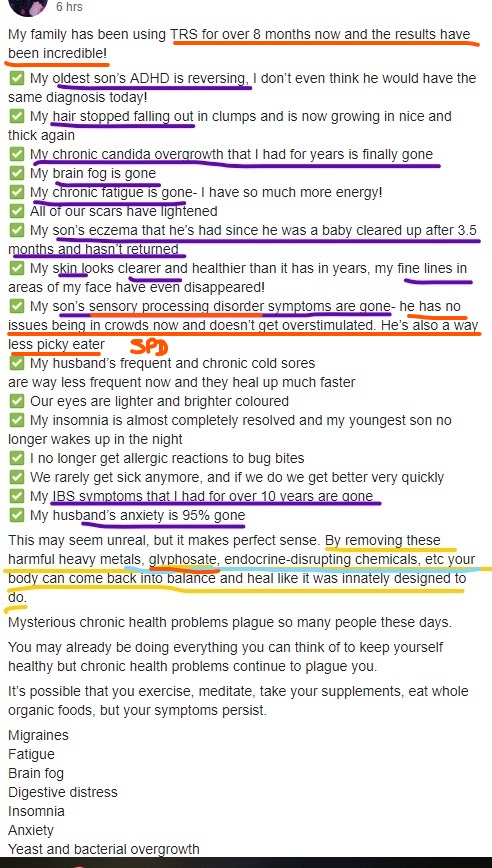 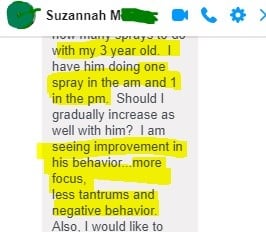 “Trust in the LORD with all your heart, and do not lean on your own understanding. In all your ways acknowledge him, and he will make straight your paths.” ~Prov. 3:5-6

Get your free copy of the Vital Vaccine Info E-Book
Medical Disclaimer: I am no longer a practicing medical professional, and I am not doctor. I am a mother. I do seek scientific confirmation of the safety and effectiveness of the herbs and remedies I use. Using remedies is a personal decision. Nothing I say on this blog is intended to treat or prevent disease. Consult your own doctor. 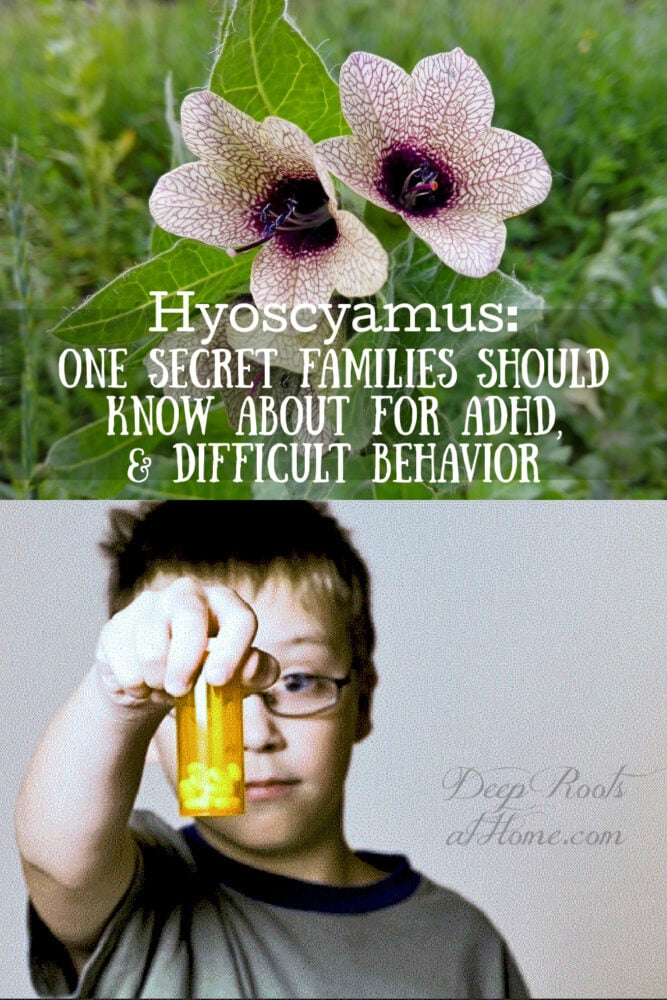