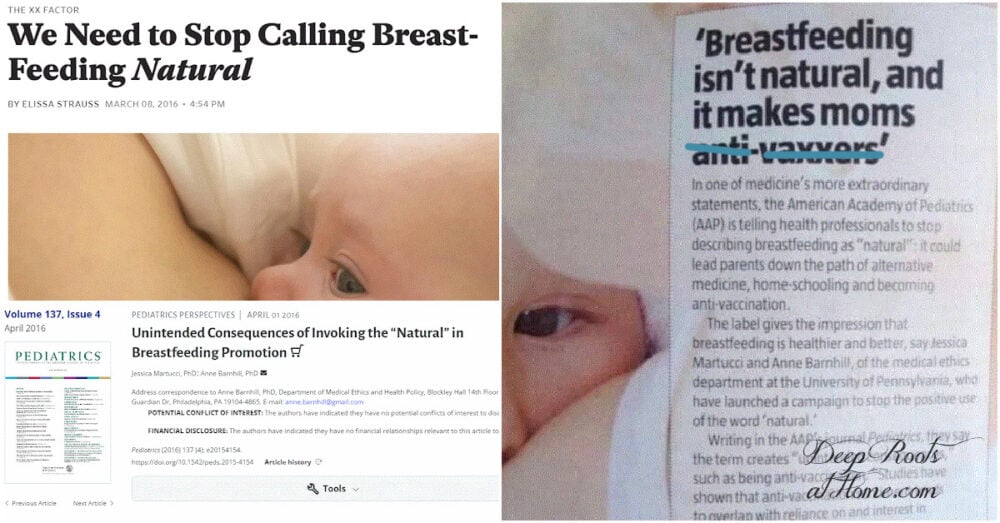 The articles in the top image are not new, but the rush to dissuade women from what womankind has done to nourish our newborns since the beginning of time is now fiercer than ever. It grows more intense with the urgency to find baby formula and formula recipes.

The author of the Slate article fretted that “breast-feeding advocates are reinforcing the idea that natural is A.) something that actually exists and B.) healthier.”  That using the word ‘natural’ might unintentionally cause bias against “unnatural” interventions like vaccinations. It as much as implies breastfeeding could lead mother’s down the road of homeschooling and alternative medicine.

“The idea of the ‘natural’ evokes a sense of purity, goodness, and harmlessness. Meanwhile, synthetic substances, products, and technologies mass produced by industry (notably, vaccines) are seen as ‘unnatural’ and often arouse suspicion and distrust. Part of this value system is the perception that what’s natural is safer, healthier, and less risky.” ~Pediatrics, Jessica Martucci and Anne Barnhill

After Slate covered the paper, more than 650 commenters weighed in, many like these two examples are particularly snarky: “This reads like something I’d find in The Onion.” and “This is alarming to see posted in a pediatric journal.”

The Pediatrics commentary fails to mention the medical community’s complicity in the promotion of formula over breastfeeding following WWII. The only reason breastfeeding even needs to be “promoted” today is because of the unholy alliance of the medical field with formula companies back in the 50s to convince families across the USA that nursing is passe and that formula feeding is “more scientific” and healthier for babies.

“In the nineteenth and early twentieth centuries, the old and honorable tradition of the wet nurse was the preferred alternative when an infant’s mother was unable to provide milk for her child. With time, however, a campaign was launched to discredit wet nursing in general. The unmarried status of some of the wet nurses offended the moral code of influential social groups. Rumors circulated that the women were of low morals and carried venereal diseases. Besides, most modern families did not have the means or the inclination to have a strange woman move into their homes. Gradually, by persuasive advertising and other clever tactics, the formula industry got the attention of mothers everywhere.

“The formula manufacturers’ main slogan in those days was that their formulas were “scientific” and thereby certain to contain all the ingredients that the baby needed to grow and be healthy. At that time infant mortality was high and breast milk and cow’s milk were named as culprits. So-called experts claimed that mother’s milk was not adequate to support the child.” (source)

“Sigmund Freud theorized that infants experienced suckling as sexual pleasure. Mothers were scandalized and to head off the development of infantile incestuous desire, breastfeeding, holding, fondling and cuddling were all abandoned. Virtuous mothers instead propped their babies up in high chairs with bottles.” (source)

My mother’s doctor utterly failed her in 1952 when she desperately wanted to nurse me and desired guidance, telling her, “What milk you have is no good or your baby would want it. The formula is best.” She told me she cried buckets of tears in the shower, because they told her she ‘had to’ bind her breasts.

An entire generation and more of mothers lost the matriarchal/community wisdom regarding nursing, and we have not come close to recovering from this damage today.

And formula companies like Nestle continue to push this false marketing campaign in third world countries even today. This kind of behavior leads to a distrust of medical interventions and of science in general.

It was troubling to me that, in the Pediatrics article, assumptions were made about women who breast-feed and women who have questions about vaccines. It is true that some parents are reluctant to vaccinate their child because their child was injured by a vaccine. Our oldest son seriously reacted to his first DTaP, and I never went back. More and more are studying the issue and are concerned about the risks. They have legitimate concerns.

The vaccine controversy will not go away by labeling people and denigrating them.

It is important to recognize that breastfeeding can be hard.

The first time a woman breastfeeds she needs encouragement and guidance (such as knowing the volume of your newborn’s stomach).

My observation as a nurse is that the interventions that take place in the hospital can greatly influence the breastfeeding experience. Medications given to induce labor and for pain management can have negative side-effects. Women that have C-sections have a more difficult time establishing breastfeeding. If there was support, it would make a huge difference.

How soon the baby is placed in the mother’s arms (hopefully skin to skin in the first hour of life) influences early success in breastfeeding. If the mother has been traumatized by the manner of birth, breastfeeding may be more difficult to establish without a lactation consultant or a trusted older woman who has breastfed her children.

Are we being asked to consider all medical interventions as natural?

When we observe normal physiology and gain practical insights, are these unnatural?

Visual: Know The Size & Volume Of Your Newborn Baby’s Stomach

That is why I am an advocate of birthing out of the hospital if at all possible. A good midwife and doula are worth their weight in gold! Many know much more than a doctor in his own little bubble and their wide experience with the birth process is invaluable! Doctors today only come in for the actual delivery making them myopic (definition #2).

I am sad because the turmoil in science and medicine is only making it hard on parents. My hope is that the medical community will listen to the concerns parents have and treat them with respect.

Reasons Sometimes We DO Need A Homemade Baby Formula…

“Let the morning bring me word of your unfailing love,
for I have put my trust in you.
Show me the way I should go,
for to you I entrust my life.” ~Psalm 143:8