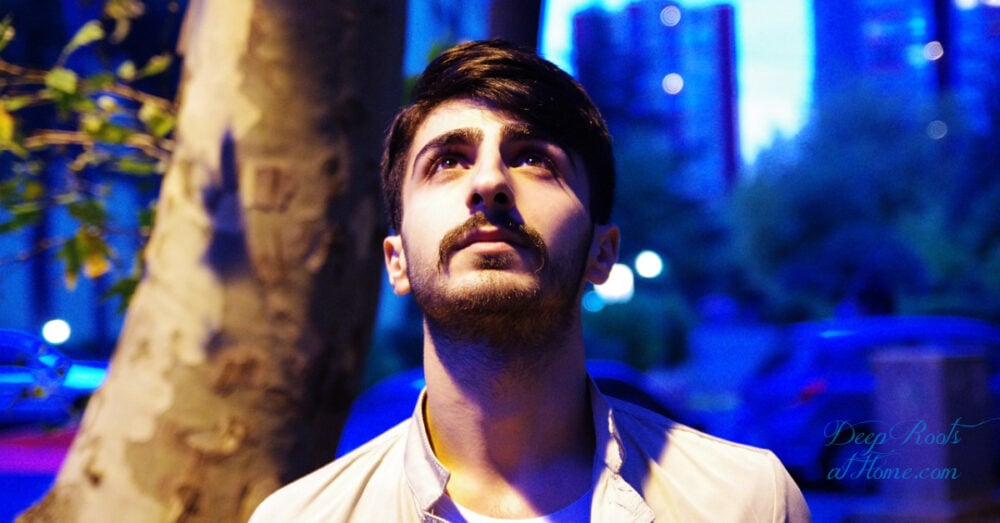 During an online discussion someone asked, “Why did God ‘create’ or allow cancer?”

What a great question. Why would a truly benevolent Creator do such a thing? Does God hate us? Why would God let cancer exist? Why does God let innocent, good men, women and even children get cancer – and die?

[Shared with written permission from Ted Koren/Koren Wellness, because greater understanding will help you not just survive, but thrive. And please don’t miss the video below.]

Why did God create or allow cancer?

Why does cancer exist? I’m sure you’ll be surprised to learn that your ability to make tumors comes factory installed – your body is genetically programmed (using oncogenes) to create tumors.

Not only that, in addition to the body creating tumors, it nourishes the tumors with a blood supply. Why would this occur?

Why would an exquisite creation such as our wisdom-filled body have this built-in seemingly self-destructive mechanism? Is it a mistake? Is the body stupid?

It makes no sense unless …

Unless that tumor the body creates and nourishes serves a purpose. What purpose could it possibly serve?

The role of the tumor

Tumors are highly toxic. We know this because when a tumor is quickly broken up (lysis) so much toxicity (or poison) is released that the person’s organs may fail leading to death. (Source)

The role of the tumor is to store or sequester toxins.

Tumors/cancers and toxicity go together. It is observed for example, that toxic chemicals are stored in breast tissue:

Elevated levels of polychlorinated biphenyls, bis (4-chlorophenyl)-1,1 dichloroethene, and bis(4-chlorophenyl)-1,1,1 trichloroethane were found in fat samples from women with cancer, compared with those who had benign breast disease. These results, although preliminary, suggest a role for suspected environmentally-derived carcinogens in the genesis of mammary carcinoma. (PMID:1567239).

One independent researcher reported a 100% correlation between root canals and oral infections being on the same side of the mouth as the lung and breast cancers in nearly 4,000 women without a single exception. (Hughes F. Research by Robert Dowling. Am I Dead? … or do I just feel like it.)

For nearly a century it has been known that tumors/cancers concentrated in populations exposed to toxicity – especially to people living or working near, downwind or downriver from chemical factories, refineries, toxic waste and others spewers of poisons. The observation is inescapable – people who are exposed to toxins get cancer. An excellent book on this subject is The Secret History of the War on Cancer by Devra Davis. Dr. Davis writes:

In the 1930s, researchers in Germany, Japan, Italy, Scotland, Austria, England, Argentina, US and France showed that where people lived affected getting cancer.

Ask an American oncologist, “Why did I get cancer?” and he’ll look at you like a deer in headlights and mumble something about genetic mutations. However, the cause of cancer was well-known in Europe. Natasha Campbell McBride, MD, creator of the GAPS diet protocol who went to medical school in Russia, says, “In Europe and Russia it was always known that toxicity caused cancer; there was no question about it.” (Via personal communication with the author, May 2017).

Cancer tumors come and go throughout our lives

Tumors have a limited life span in most cases; tumors come and go all throughout our lives. You may have many tumors today and none tomorrow – if your body is working as it should – because you have a natural ability to remove toxins (detoxification). The tumors then won’t be necessary, and your body will dissolve, neutralize and eliminate the tumors.

An example of this is the fascinating revelation that far more tumors/cancers are found on autopsy (for example in victims of auto and other accidents) than are even diagnosed in doctor’s offices. For example:

The body’s ability to dissolve and remove tumors, even life-threatening cancers, is known medically as the phenomenon of spontaneous remission. Spontaneous remission is well documented in the bio-medical literature. The tumors just disappear.

Because God loves us

From a religious perspective, we may say that God has given us the ability to create tumors/cancers because He loves us. God has installed within us a marvelous self-protective mechanism – the tumor. It is only when we foolish humans often unknowingly repeatedly poison ourselves and continue to do things that interfere with our body’s natural ability to detoxify that this protective mechanism breaks down. Cancer is not the problem – cancer is a symptom of a generalized whole body condition.

The tumor is the result of the problem, not the cause. Tumors are designed as defense mechanisms to keep us alive.

Once again: The role of the tumor is to store or sequester toxins. Tumors keep toxins from spreading and keep the poisons confined to a small circumscribed area.

What about chemotherapy for cancer?

The prevailing model of the “War on Cancer” – kill the tumor – is completely backwards. The tumors are not the problem, they are the answer. Attacking the tumor may cause a kickback causing the body to struggle harder to keep the tumor functioning to collect the toxins. That’s why studies show that chemotherapy can make tumors more aggressive. For example, the headline from Dailynews.com commenting on an “unexpected” chemotherapy finding:

The answer to a toxic condition is not more toxicity. Chemotherapy is highly toxic and is itself carcinogenic (cancer causing). That is why the success rate of chemotherapy been described in one of the largest studies ever done as “appalling.” (Abel U. Chemotherapy of advanced epithelial cancer – a critical review. Biomed Pharmacotherapy. 1992;46(10):439-452).

Echoing that finding, a major study reviewing fifteen years of chemotherapy treatments found that the five-year survival rate for those on chemotherapy with the most common cancers that caused the most deaths was zero to about 2 or 3%. (Morgan G, Ward R, Barton M. The contribution of cytotoxic chemotherapy to 5-year survival in adult malignancies. Clinical Oncology. 2004; 16:549-560).

If you or a loved one suffers with cancer, this video contains vital information which should not be withheld. I would not ask your time if it wasn’t important.

For a complete healing

For a complete healing of cancer, we must address its cause. What a person diagnosed with cancer needs most is detoxification, cellular nourishment, stress relief, a health-promoting lifestyle and avoidance and removal of toxicity.

The goal of the healthcare practitioner should be locating the cause of the toxicity (both internal and external) and working with the patient to enhance detoxification, cleansing and purification, and mitigation of external causes for a complete recovery.

There’s a reason why detoxification practices such as hot baths, sauna, fasting, cleanses, herbs like Essiac, and many others are found in every culture through humanity’s history. If the ancient Greeks, Romans, and native peoples from all over the world understood the need for detoxification, shouldn’t modern day Americans? We, as a culture, are far more toxic than any other civilization, and we have the diseases to show for it.

TRS (zeolite clinoptilolite) activates the P21 gene which appears to halt the growth of tumors by directly suppressing growth signals: 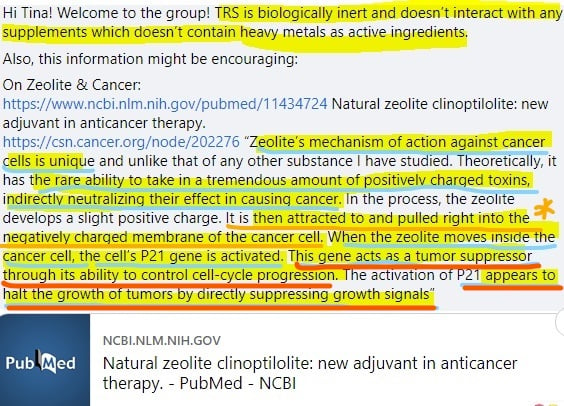 There are many partially successful detox methods. There is only one cellular detox method that fully binds ~80,000 metals and toxins (and does not release them back to the body)— and that is Advanced TRS.

TRS is even safe enough to use in pregnancy and while breastfeeding. (See this definitive PubMed metastudy stating safety in humans, animals, and their developing offspring).

Visit here for more product details and to order TRS.

The most important thing to remember is the best way to be truly cured is to address the root cause. The tumor is not your enemy, it is your ally, so work to promote its function so it will no longer be needed.

Cancer is a disease of toxicity. The most common forms of toxicity, which are unknown to most people, is a subject for another article.

God permits cancer, but in the final analysis, He is sovereign and He alone has the power to heal us.

Check out my other posts on cancer.

Avalyn’s Story: How TRS, a Safe Heavy Metal Detox, Can Help Your Child

“Oh, the depth of the riches of the wisdom and knowledge of God! How unsearchable his judgments, and his paths beyond tracing out!” ~Romans 11:33